Store Page
Starbound>  Workshop > ▲ Rikkun's Workshop
This item has been removed from the community because it violates Steam Community & Content Guidelines. It is only visible to you. If you believe your item has been removed by mistake, please contact Steam Support.
This item is incompatible with Starbound. Please see the instructions page for reasons why this item might not work within Starbound.
Current visibility: Hidden
This item will only be visible to you, admins, and anyone marked as a creator.
Current visibility: Friends-only
This item will only be visible in searches to you, your friends, and admins. 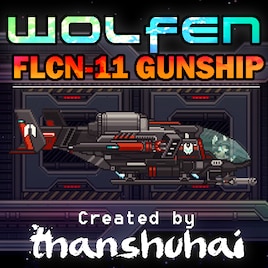 This item has been added to your Subscriptions. Some games will require you to relaunch them before the item will be downloaded.
In 2 collections by ▲ Rikkun
WolFen FLCN-11 Gunship Collection

8 items
Mods I play with

120 items
Description
A solo/duo operated gunship with set of weapons and projectiles switching. It can be a mobile platform that can carry 6 passengers and other features.

You can get the gunship from Penguin Pete from the Outpost for 150,000 pixels. 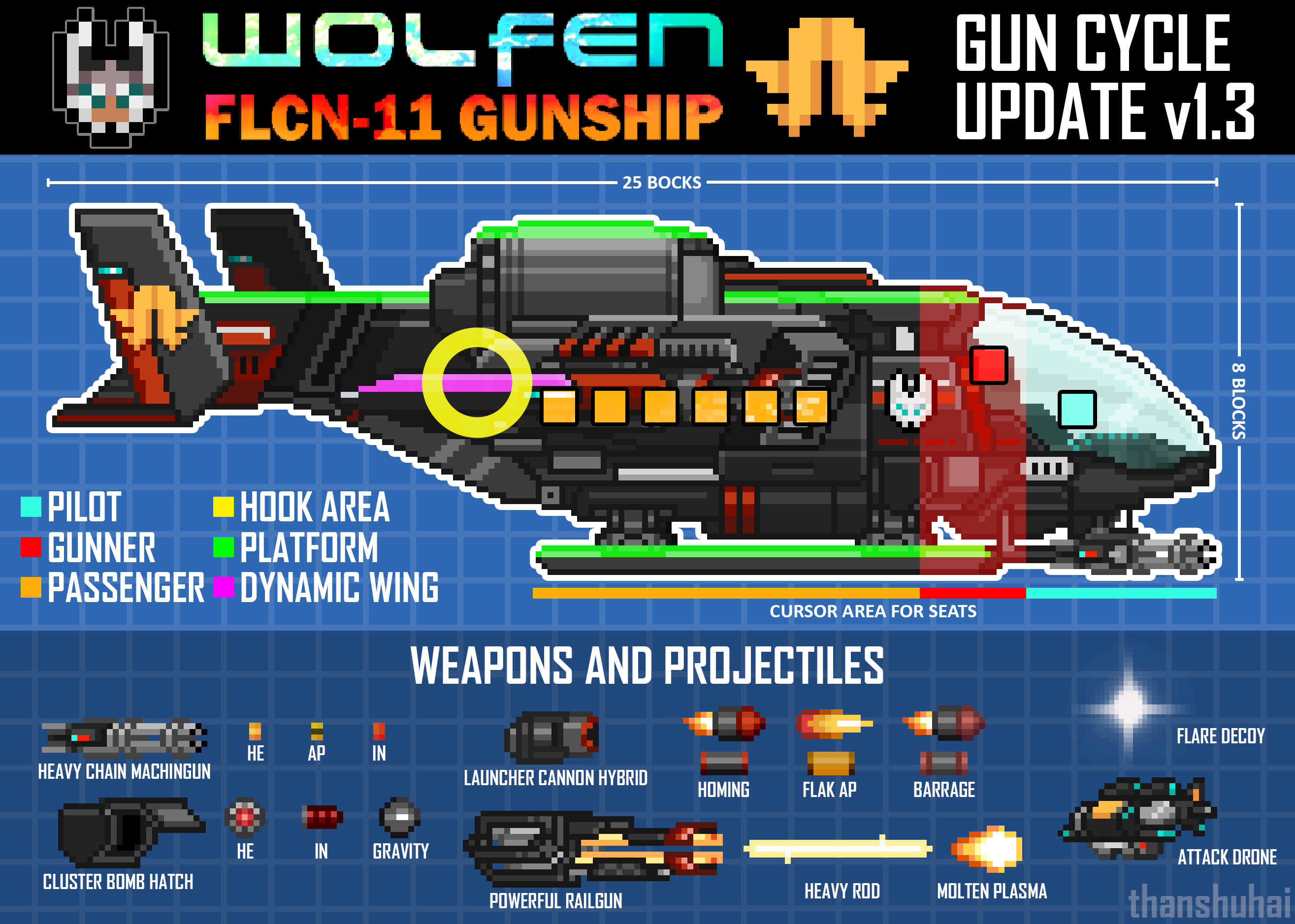 Pilot Seat: Controls the movement, utilities & weapon by default.
Gunner Seat: Can control the weapons when toggled to.
Passenger Seats: Can hold up to 6 passengers.
Landing Rails: It acts as a platform which you can stand on.
Dynamic-Wings: The wings will always stay horizontal, you can grapple/rope into it to get up. TIP: Attach your hook in the middle of the wing. If you're grappling down, hit the top of the wing then swing down. (Sadly hook won't stick when gunship is moving.)
Sealed Hull: Protects the people inside the gunship from hazards. The gunship can operate in zero-g and will float on liquid.
Auto-Hove/Land System: The Pilot and Gunner can leave, the gunship it will hover by itself. If there’s no crew present inside for 120 seconds, the system will hover-down the gunship vertically, if it detects solid ground(Ignores platforms), zero-g or liquid the engines will shutdown and drones are deployed for defence.
Zero-G/Liquid Sensor: The gunship has a built-in sensor that detects if the ship is in zero-g or liquid, it will automatically turns off the thrusters accordingly to the movement or when it comes in contact with liquid. If the gunship is submerged in liquid it will automatically shut down its engines.
Alarm: Trigger when the gunship is damage or critical, flares are auto-deployed when gunship gets damaged.

[SPL] Spotlight: A light mounted in the [HMG].
[SRN] Siren: Gunship will emit a siren sound.
[DRH] Door Hatch: Let’s NPCs to ride the gunship’s railing platform. (Makeshift solution for getting NPCs to ride with you in the. I’m still figuring out how to get NPCs inside the gunship.)
[GVF] Gravity Field: Can carry some mech and some vehicles but the gunship will go half as fast.
[LDG] Landing Gear: Deploys on an even ground surface and will multiply [RLG] shooting speed twice.

❗❗❗
Controls shown below are the default Starbound keybinds, Please be sure to assign Special2 & Special3 to your keybind controls in the game options. (I use G & H key for this)
❗❗❗

Known Bugs:
-Sounds vanishes and auto-land timer won't start if the gunship is off screen.
-Dynamic-Wings can derail stuff and can push movable objects. Projectiles can't pass through the wing. (Not necessarily a bug since this is needed for hooks to grab on it.)
-When [DRH] is active the Penguins or small NPCs will float when pulled. Sometimes it can also flung NPCs around.

Credits:
-Thanks to ZimaZang for letting me use the handtheta railgun from his ZZ Mech Modifications mod.
-Thanks to Mizuno for testing the mod for me.
-Thanks to Rylasasin & pjaj for making addons for this mod.
Also for the modding community for inspirations ♥

If you already purchased the 1.2 version which I renamed "Prototype", you can upgrade it for free via the WolFen FLCN Station from Penguin Pete.

Uninstall:
Game will crash first time after uninstall but you can run save again and it will run normally.

NOTE: Must be installed on server AND client/s for multiplayer use.
-It's a standalone mod, it should be compatible with any other mods.
-The prototype version is the older version of the gunship, its unobtainable and only exist to be safely upgraded to the latest version.
-Please be sure to read the controls stated above before commenting a problem.

I mainly made this mod for fun and for myself, this mod is not for everyone due to the complexity of the controls.

I am busy with life. If you're willing to improve and upload a different version of this mod feel free, just credit me & link this mod back.


Don't forget to rate and most of all have fun! :)
Popular Discussions View All (3)

PINNED: Got any ideas or suggestions? :)
▲ Rikkun

Everyoneplays May 8 @ 4:21pm
I remember when I got this mod before... Didn't end well. My 2 computers wouldn't let me play Starbound anymore just crashing on startup. So If you have anny microsoft computer I wouldn't recomend getting this mod. Its like a curse. (Sorry dev just a major issue with having my computer play this game. Maybe make a mod that you can play a game like defcon in? As long as I can play Starbound im cool with it. I just hope you all can play this and not have trouble with it.)

TheChaosEwok Nov 7, 2021 @ 10:09am
@Gounui u can just cheat u money with a command why u need a command for cheating the vehicel and yes there is an command to spawn the item every item has a spawncommand

Chet Walters Feb 25, 2021 @ 12:03pm
@Rikkun - np bud. It's really really awesome. And I absolutely love riding this thing.
Allright. Will take a look into it then. Thanks for replies/info, stay safe and best wishes, dude.
< >