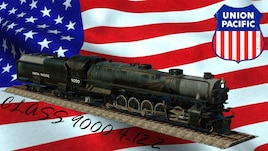 Thad
Offline
See all 181 collections (some may be hidden)

Union Pacific's 9000 class 4-12-2's were built by the American Locomotive Company (ALCo) between 1926 and 1930. It was and still is the only 4-12-2 steam locomotive type in existence. A total of 88 were produced for UP. One example survives: Union Pacific 9000 at the Railway and Locomotive Historical Society's museum at the Los Angeles County Fairplex in Pomona, California.

This mod is a basic repaint of the existing model, including conventional Union Pacific markings, a more realistic end date and proper textures on the steam dome.
< >
17 Comments

Capitán Alatriste Feb 27, 2019 @ 1:28pm
Wellp, it's the closest thing I've found that resembles the Polar Express, so let's roll it out

mattamartin Feb 25, 2019 @ 2:18pm
Im just going to ask but could there be a mod where you can design locomotives or any transport it would be a cool idea if you have time take this as a note if you dont make it im completely fine with it so if you can make this that would be great

The Illustrious Fistula Oct 10, 2018 @ 11:01am
Great model, I always use this in my game. Any chance on ever making the Challanger?

@The entire population of Finland
Noted

Thatguywhoiscool Nov 24, 2017 @ 9:22am
I'd love anything (especially coaches) in Lehigh Valley or Reading Company paint.