Store Page
Arma 3 >  Workshop > Crazy Mike's Workshop
This item has been removed from the community because it violates Steam Community & Content Guidelines. It is only visible to you. If you believe your item has been removed by mistake, please contact Steam Support.
This item is incompatible with Arma 3. Please see the instructions page for reasons why this item might not work within Arma 3.
Current visibility: Hidden
This item will only be visible to you, admins, and anyone marked as a creator.
Current visibility: Friends-only
This item will only be visible in searches to you, your friends, and admins. 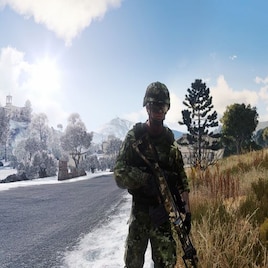 Crazy Mike
Online
See all 921 collections (some may be hidden)

This item has been added to your Subscriptions. Some games will require you to relaunch them before the item will be downloaded.
Description
An icon will be made to represent the mod soon.

What is this?
Simply put, this modification is a re-texture mod, taking anything green, and making it white, as in snow! I decided to create something for the wintertime in Arma, thus here we are now with a new WIP mod, Winter 2035. This is the initial release, mainly completed yet will be tweaked in the future and new features added.

Depending on the popularity of the mod, vehicles, units, and weapons will ALSO be retextured giving a more "total conversion" type feel to the mod, however at present you will need to look to other mods for winter textured equipment and vehicles.

NOT to mention, i would have to debinarize and steal dozens of p3ds aswell ;)
Popular Discussions View All (4)

SirBassi Nov 4 @ 3:41pm
I was just speechless as I see "my" lovely Altis in snowwhite with this lightweight Mod. Thanks for your work and sharing to us. But small question to you: May it be possible to convert your Mod to SOG CDLC Map Cam Lao Nam? I am starting this days for preparing a Christmas Event for our Mike Force Community and your work is quite awesome and would match perfect. Thanks for your reply and best for you.

Crazy Mike  [author] Apr 27 @ 11:26am
youd need to add new landscape layers which are *somewhat* baked deeper into the map / .wrp file so you couldnt really do that without the map source, when arma 4 comes out and altis is released as sample files like the arma 2 files maybe?

Rickoshay Apr 27 @ 3:17am
@crazy Mike - this is really clever work - thank you! I saw some of your early transitions on BI forum - it would great if you could have snow in only parts of a map with gradual transition if that's possible.Also is there a way to kill the rain sf on Dedi?

Bruce Mar 5 @ 1:19pm
News abaout this map on a dedicated server? Does it work?
Thanks

brezerk Feb 10 @ 3:21am
Great mod, but does not seems to be working on dedicated server, unable to load mission with this mod installed:

Maybe realted to Exocet and r0dx's comment's
Thanks anyway.

Crazy Mike  [author] Jan 9 @ 7:21am
yea i highly doubt i could have fixed it myself, this mod is extremely simple in that all it does is load my texture pbos instead of the vanilla ones, no idea what could have been deleting foliage across the map xD

Exocet Jan 8 @ 6:42pm
Update: Issue have been reported to A3 devs on the discord, and it was related to a certain feature present only in the performance branch, they say it will be fixed in 2 weeks :)

Exocet Jan 7 @ 6:07am
Hi mike, i want to add to r0dx's comment, that it also doesnt work on performance branch and reports the same error: addon 'a3_data_f_loadorder' requires addon a3_plants_F_bush. In-game all bushes and trees disappear, if possible please do a fix, this map is so awesome but couldnt play it because of the error :(
< >