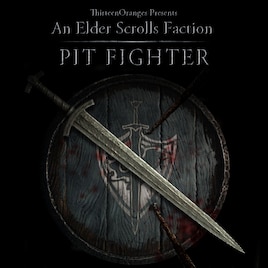 This item has been added to your Subscriptions. Some games will require you to relaunch them before the item will be downloaded.
In 1 collection by ThirteenOranges
An Elder Scrolls Collection

11 items
Description
Pit Fighter contains an all new faction to join, complete with NPCs, progression through the ranks, unique rewards and side quests.

"The Pit Fighters of Windhelm were once the city's proud Arena Team, known throughout Tamriel as The Paladins. Since the Arena in Windhelm was closed, the team has fallen on hard times, competing in underground pit fights to earn coin and renown as the great champions of the Arena they once were. Join their ranks, compete in Pit Fighting Arenas throughout Tamriel and challenge current Champions to earn the ultimate title, becoming a Legend of gladiatorial combat."

The Travels add-on is now available to download, allowing you to compete in fights and challenges throughout the other provinces of Tamriel, with new weapons, enemies and creatures.

- An all new faction to join.

- Compete in a variety of locations from Windhelms old Arena to Orc Strongholds and Smuggler fighting rings.

- Fight against a variety of opponents from one-on-one contests to fights against teams of opponents or dangerous creatures.

- Bet on (and spectate) fights in Windhelm's Old Arena.

- Lore friendly and consistent with the style and themes of the rest of the game.
---------

- Dialogue is fully voice acted to a high standard.

- The Pit Fighters can be found in Windhelm's Grey Quarter.

- You can spectate fights in Windhelm's Old Arena. Talk to the Doorman in the Dock's District.

- The above images contain some, but not all of the unique weapons/items available.

- This mod is Compatible with all DLC. No Prerequisites.

- Due to the start of this mod being in Windhelm, Open Cities Windhelm will not let you access this mods main features (the faction).
---------

---------
Patch Notes
note: some changes may not work without first cleaning the mod from your save.

Changelog 1.2 - 02/02/13
- Attempt at resolving Skyrim 1.9 "combatants not spawning" issue.
- Fixed an issue where the player could receive an extra Title message.

Changelog 1.02 - 16/01/13
- Fixed string errors in Messages.
- Set Rank Tracking Quest to "Complete" when final title is attained.
- Fixed issue where Sirollus could "get out the wrong side of bed".
- Fixed rare issue relating to Troll combatant in WH Arena.
- Fixed Message reference on plaque for final reward.
---------

Q: What could cause the game to crash to the desktop?
If the .bsa is conflicting with another archive from a mod using the same scripts/assets or otherwise failing to access it's data it will cause the game to CTD in the front end menus. Try changing the load order first as the issue can sometimes cause "incompatibilities" between mods that would otherwise work together. If it still won't work, then disable other mods one at a time until it does.[/i]

Q: Why do I get a Steam Error when trying to download the mod?
A: This is a connectivity issue between you and steams servers during the download. Nothing to do with the mod directly. Contact Steam Support if it persists.

Q: Will this mod ever be on Skyrim Nexus?
A: Absolutely Not. Please do not ask for this.

Q: I've not seen Adamantium in TES, is the blade lore friendly?
A: Yes, Adamantium was an ore type in TES III: Tribunal Expansion (and previous TES games), that could be used to make Adamantium Armor.
---------

---------
DONATIONS
I can only continue to make mods with the generosity of the people who use them. If you enjoy my mods, please make a small donation via PayPal[www.paypal.com] to the_a1f@hotmail.com.
Any contribution of any size is welcome. Thankyou.
---------
Popular Discussions View All (30)

PIT not There
Full Putasso

Compatibility with other mods.
Precious

jonnylsutter2 Sep 20, 2020 @ 4:39pm
I Love this mod!! not great for my dashing rogue/bard character a rapier and parrying dagger are not the wisest weapons for this one but if you have a good sword and board or smashy barbarian its flippin phenomenal. great mod from great content creators