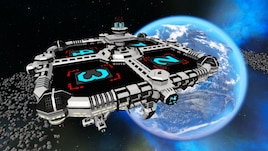 This item has been added to your Subscriptions. Some games will require you to relaunch them before the item will be downloaded.
In 1 collection by Siege
Nexus Station Collection

2 items
Description
Nexus Station is designed to be a central hub offering trade, entertainment, and hospitality services to travelers. The main level features a spaceport with landing pads and docking ports while the lower levels feature a great many things including an entire city level. The Station is organized into four quadrants based on the landing pads. The city blocks, engineering, baggage handling, etc are numbered to correspond with the landing pad above them.

It's basically a big theme park with a lot of different areas that you'd expect to find in such a structure. There's also a lot of pop culture references and an easter egg or two. Fun stuff. It's a big place to wander around and explore and get lost in. It has a shield but no guns. I'm planning to make some kind of defensive satellites for it at some point.

Size class: 182
Materials: Various and lots of it

The lower decks feature in no particular order:

Rumor is there's a maintenance issue in one of the habitat rings. There seems to be a mechanical breakdown of some sort. Station crew have been noncommittal on the nature of the malfunction but a few people passing through noted some sort of slimy growth on the walls before station personnel closed the area down. Guards have been posted to keep onlookers away but the Station Commander assures everyone it's not dangerous. Nope. Not dangerous at all.


4-6-2020: Finally, eh? The station has undergone another massive update and I'm excited to finally be able to share it! A lot has changed. If you're already familiar with Nexus Station there's plenty of new stuff for you to explore.

Pics are updated but by no means comprehensive.

Notable changes:
The overall design aesthetic went from 80s chintz to sleek and modern.
Fixed the X/Y axis. It's symmetrical now. This one has been a long time coming. Pro tip: Measure twice, cut once. Make sure everything lines up BEFORE you're a hundred hours into a build.
Remodeled the casino.
Remodeled Engineering.
Added two habitat rings under the station. One for crew quarters, the other features a mall, theater, hockey arena, shops, and a jail.
Expanded the subway. It connects with the new habitat rings. I also added doors to make it easy to get the Nexus Monorail Car MkII in and out.
Updated the hangars. Went from 2 small hangars to 8 larger ones. Completely redesigned.
I also deleted a bunch of lights and npcs to try and keep fps at a somewhat reasonable level.


Let me know if you find anything broken!


A version of the station with no npcs can be found here.
< >
126 Comments

Glühwein Sep 1, 2020 @ 2:04pm
Great Space station. issue im having is the fps drops too much other than that it is awesome

Siege  [author] Dec 23, 2019 @ 6:15pm
The update has stalled a bit. I've been a little distracted over the holidays and I was kind of hoping Eleon would take my suggestion and create a debug mode for gravity which would make my job a LOT easier. Alas, I think I'm just going to have to do it the hard way.

I can make a version without npcs for sure. I'll add it to the list.

SoulzBaen Dec 23, 2019 @ 6:06pm
Looking for a new space base, was wondering how the update is going? Also, for potential issues with performance, is there a way to get a version without the NPC's?

Siege  [author] Sep 25, 2019 @ 2:16pm
There's a separate monorail car sv that's designed to work on the tracks but you have to remove part of the tunnel to get it inside. That's something I've rectified in the version I'm working on by extending the tunnels and adding doors to make it easy to get the car inside. But yeah it's an additional blueprint to subscribe to. There should be stairs up to the city level at each station.

Yes, the captain's quarters did get lost in one of the updates. Maybe I'll add it back to one of the new areas.

I'm aware of the gravity issues. This will be addressed in the next update.

The Monorail was another way to get around from one city area to the other. I've expanded it a great deal on the new version I'm working on connecting it to more things, making the monorail stops bigger, and providing easier access to get monorail cars in and out. It's not really practical. I just thought it would be a cool thing to have. =)
< >