Store Page
Arma 3 >  Workshop > DireOne's Workshop
This item has been removed from the community because it violates Steam Community & Content Guidelines. It is only visible to you. If you believe your item has been removed by mistake, please contact Steam Support.
This item is incompatible with Arma 3. Please see the instructions page for reasons why this item might not work within Arma 3.
Current visibility: Hidden
This item will only be visible to you, admins, and anyone marked as a creator.
Current visibility: Friends-only
This item will only be visible in searches to you, your friends, and admins. 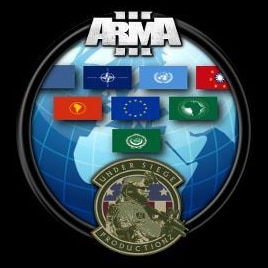 DireOne
Offline
See all 768 collections (some may be hidden)

This item has been added to your Subscriptions. Some games will require you to relaunch them before the item will be downloaded.
Description
By: Siege-A

Each addon is standalone, and only requires USP_Markers_Core (Included) to function.

This long overdue update includes a few new markers as well as an overhauled file structure. Server key and signatures have been fixed and 2 new pbo's have been added (Details further ahead). Classnames have been updated accordingly, as well as a classlist provided, and compatible with the 3D Editor. Overall, just looking to bring this addon back up to speed.


USP_Markers_Core.pbo is now required by all other addons in order to function properly. Each addon is standalone and only requires the Markers Core.


USP_Flags.pbo is a new inclusion for this update, adding placeable flagpoles in the editor. Currently, it includes all of the world flags that are present in the USP_Markers addon (All countries of the world). Future updates may feature flags from some of the other Marker addons as well, such as factions and pmc groups.


This addon is very low priority for me, as can be seen with how long it's been since the last update, but I do try to keep anything I've released operating for the long-run. So, on that note, don't expect to see anymore updates from this for awhile, aside from the occasional hotfix. Hope you all enjoy the addon and always feel free to post comments or requests on the forums.

OksmanTV Aug 1 @ 5:05pm
Get a few errors this one currently when saving a mission with one of your flags in it. Anyone else got this?: "[]: 'bin /config.bin/CfgPatches/USP_Flagsi not an array"

aziirax Jan 31 @ 2:20am
the swastica flag feels out of place