Store Page
Divinity: Original Sin 2 >  Workshop > Roach's Workshop
This item has been removed from the community because it violates Steam Community & Content Guidelines. It is only visible to you. If you believe your item has been removed by mistake, please contact Steam Support.
This item is incompatible with Divinity: Original Sin 2. Please see the instructions page for reasons why this item might not work within Divinity: Original Sin 2.
Current visibility: Hidden
This item will only be visible to you, admins, and anyone marked as a creator.
Current visibility: Friends-only
This item will only be visible in searches to you, your friends, and admins. 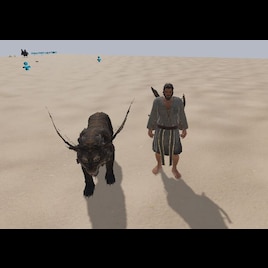 Roach
Offline
See all 94 collections (some may be hidden)

This item has been added to your Subscriptions. Some games will require you to relaunch them before the item will be downloaded.
Description
MOD IS BACK IN WORKING ORDER, COMBAT AND ALL!

Ever wanted a cute pet to keep you company on your adventures? A fierce demon to aid you in battle? Or maybe a slave that follows you around?

=========================== NOTES ===========================
• Removing the character from your party will also remove the companion and money will be lost, so make sure to get your money back from the trader if you want to swap out party members.
• Well most companions can join their owner in battle it won’t necessarily be very balanced. Some companions will be very strong and others very weak and I changed no stats (So the plague doctor for example will not have any specific skills)
• All companions that can join battle should have battle logics and animations but let me know if you run in to issues.
• You have the ability to turn off random names (Not everyone wants their slave to have an identity ;) )
• Companions are immune to death fog for the sake of it being a pain otherwise. (Only really a thing when the owner character is an undead)
• You are able to unlock all companion tiers for all traders in the options section of the dialog. This gives you access to all companions right from the start.
• I have not tested this mod in multiplayer, technically if both have (or at least the host has) the mod then I don’t think there will be a problem but let me know if it works or not. :)
• It’s hard to test every companion and every scenario but so far all problems have been fixed that were found. Let me know if any bugs pop up.
• You can use my mod to add new companions if you so desire but let me know before hand and don’t take full credit. (There is a “How to add companions” section in the story goal Init)


=========================== CHANGE LIST ===========================
V1.1
• Fixed crash bug that was caused when trying to get a new companion after returning the old one.
V1.2
• Traders now give a proper refund if the player asks for one.
• Issues with Pets & Companions attacking Player Characters that are not heroes (aka Companions) should be resolved.
• Pets and Companions are now Neutral towards any character except for Heroes and Player Companions this should fix the issues where as combat would or would not start as intended.
V1.3
• Made mod compatible with latest version of DOS2.
V1.4
• Hopefully fixed issues with combat randomly starting.
• Gave some companions weapons.
V1.5 - 22-05-2018
• Fixed Issue with companions not joining in combat. (Sorry for the long wait)
• Updated some of the icons of the human companions.
Popular Discussions View All (3)

Want to use my mod for your own mod?
Roach

kmcsjr Dec 8, 2020 @ 2:44pm
No worries. Thanks for the response. It's a fun tweak and I'll use it as is. Hope your current endeavors are enjoyable.

Roach  [author] Dec 8, 2020 @ 8:39am
@kmcsjr I am sadly no longer supporting the mod. Technically your companion should be the same level as you (which should fix the hit point issue) unless some update broke that logic also the only way to remove the source color is through script I am afraid. They don't have the item as far as I remember only the visuals. And yes there is a way to get pets instead of humans though again through script I am afraid.

kmcsjr Dec 7, 2020 @ 10:12pm
Roach,
The Mod is a lot of fun. I'm guessing you aren't changing it anymore, but I have 2 questions
1) Is there any way to gt the source collar off the human assassin in Driftwood
2) Why does my Tiger from Act 1 have so many more hit points that the human assassin from Act 2 Also, I'm level 11, but the TIger is level 15?
3) Is there any chance to get Pets instead of humans at higher levels

Evilassassin May 27, 2020 @ 7:25pm
True it would be a great start for anyone if they did want to create the lore or add on to it, but i dont believe it would be too weird in that setting at least of an animal talking

Roach  [author] May 26, 2020 @ 9:54am
I worked on the game. As far as i know you just need to assign some player logics like adding it to DB_Players, tags and you are pretty much there. It's just... what are you going to do with conversations and so on. To disable it would be a pain so that means that it would still act as a normal humanoid player in conversations which is a bit weird.

Evilassassin May 25, 2020 @ 6:20am
As far as I can tell theres none like that on the workshop but id have to say if you know the modding tools it cant be that hard as you could just take a merc preset and change their model to animal, but I have no clue as thats just a guess

Roach  [author] May 24, 2020 @ 11:41am
@Evilassassin No clue, you will have to check that. Knowing the way the game is build it might be difficult though certainly not impossible.

Evilassassin May 21, 2020 @ 7:11am
Are there any REAL companions such as the wolf mod also on the workshop or are they all AI controlled followers/pets with no equipment/inventory?
< >