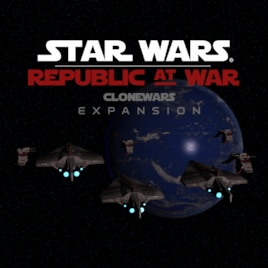 Syionic
Offline
See all 1482 collections (some may be hidden)
You need DLC to use this item.

This item has been added to your Subscriptions. Some games will require you to relaunch them before the item will be downloaded.
Description
What is Republic at War?
Republic at War is a total conversion modification for Star Wars Empire at War Forces of Corruption. The mod replaces the Empire with the Galactic Republic and the Rebel Alliance with the Confederacy. Republic at War focuses heavily on the theatrical films but also contains content from the Clone Wars cartoon series as well as the expanded universe. Players can re-enact various Clone War campaigns such as the Outer Rim Sieges. Players will have the choice to fight as either the CIS or the Republic and wage war for control of the galaxy. Realism is key and players will have unprecedented control over how and where they fight. Push forward with an entire clone legion such as the 501st or 212th or overwhelm your opponent with a seemingly endless number of B1 battledroids. The choice is yours. There are also a number of expansions planned that will add new (as well as polish existing) content.

About Republic at War 1.2.5
This release features the long awaited multiplayer support for galactic conquests.

You can view the full changelog here[republicatwar.com].

Where to get more information?
Our Community place is at Discord[discord.gg]

For detailed information about the mod and new updates please visit our Moddb page.

Running Republic at War
After subscribing to this mod, please wait until the download is finished!

The recommended way of launching Republic at War is by using the FoC Launcher. The launcher can be downloaded here. You might want to suppress your Anti-Virus for this file. For more information how to download the mod please get the latest install guides from here.

Alternatively you can use the built-in steam method to launch a Forces of Corruption Mod.
If the game doesn't re-launch when you enable the mod ingame, or you want to just directly launch into the mod, go to the properties for Empire at War in Steam and paste the following into launch options (including steammod):
STEAMMOD=1129810972

bakmacska Nov 26 @ 5:57pm
Did the ever increasing lag in galactic conquest ever get fixed?

st0815 Nov 19 @ 5:10am
This mod completly overtakes the Forces of Corruption start. How can I turn it of or switch to another mod?

st0815 Nov 19 @ 4:31am
Why does the republic starts with 6 star destroyers while I (seps) only have 2 Providence ships? How am I suppose to deal with that?

deathgermanoro22 Nov 16 @ 7:43pm
yes,give them time but yeah. The next update is suppose to be massive. So I heard.

Jim Cramer Nov 14 @ 9:39am
I like seeing all the SWG houses on Naboo, it looks just like Theed. You guys even went through the effort of adding the AV-21, very impressive!
< >