Store Page
ARK: Survival Evolved >  Workshop > RandiLadyWolf's Workshop
This item has been removed from the community because it violates Steam Community & Content Guidelines. It is only visible to you. If you believe your item has been removed by mistake, please contact Steam Support.
This item is incompatible with ARK: Survival Evolved. Please see the instructions page for reasons why this item might not work within ARK: Survival Evolved.
Current visibility: Hidden
This item will only be visible to you, admins, and anyone marked as a creator.
Current visibility: Friends-only
This item will only be visible in searches to you, your friends, and admins. 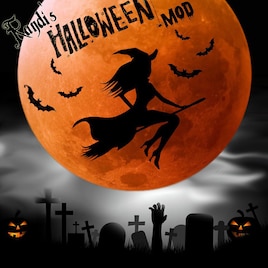 RandiLadyWolf
Online
See all 534 collections (some may be hidden)

This item has been added to your Subscriptions. Some games will require you to relaunch them before the item will be downloaded.
Description
Randi’s Halloween Mod
Mod ID: 1129514366
Stackable mod

Everything you need for a Halloween Party! Decorations, pumpkin pie,
candy corn and a fun witch’s brew, you shouldn’t drink without a sword in hand!
You can brew up a magic potion in the cauldron that summons a witch’s broom you can fly.
***Warning: Don't fly straight up until you hit the barrier at the top, it just kills you, bam! and I didn't see my stuff.

If the broom timer runs out, the broom will despawn but a magic blue fire will slow your fall. It acts like a parachute so don't jump while falling or the magic will be gone.

Plus, there are mask hat skins to act as costumes too.

I would like to add people's spooky screen shots if you wish to share send to randiladywolf@gmail.com

9/2/2021
Added full body costumes for Jason(male only), corpse(male and female versions) and a creepy doll(female only). They only work right on the male or female as indicated. Also added a new machette.

10/20/2018 changes
Fixed the spiderweb pickup points to make it easier to pick them up.
Improved the Witch's Torch light so the inventory doesn't become inaccessible.
Added fire damage to Demon Equus kick
Added Bone Costumes
Fixed the flame on the Ghost summoning candle

10/6/2018 changes
Added Iron Fence that snaps to new dirty fence foundations
Added Fence foundations
Added Topper for Pillars - can be placed on top of pillars so you can place decorations on top of pillars
Added Topper for Pillars with a stone sphere on top for decorations
Added several new "masks"
1. Devil Horns
2. Black Sheep Horns
3. Jerboa Ears
4. Tall Hat with Barbed wire
Increased Skeleton BoomBox sound distance
Changed demolision sound to pick from 6 different random sounds so its not always "I will kill you"
Added Ark's Scarecrow with pumkpin head

10/1/2018 changes
Added four new songs - see the song list below.
Added "Haunted House" Stone pieces to build your own scary looking house. Foundations stack but hard to snap, try looking down.
Added creepy vines
Added Skull face you can place on the wall that is animated to sink in and out of the wall
Added Gargoyles with modular bodies, heads and wings. There are 5 variaties of each part for 125 custom gargoyles.
Notes: 1. Gargoyle bug - If both the head and wings are on body and you pick up the head, the wings disappear.
Same if you pick up the wings the head disappears. Sorry, can't figure out why!
2. The bodies can be tricky to place because they take the normal directly from what you set them on.
Increased durability and health of all graves.
Added Halloween themed art
Added Witchlight Torch
Added Candle that summons up to three possible ghosts(ghost Raptor, ghost Direwolf, ghost Terror Bird)
Note: The ghosts can't hurt you but you can kill them for ecotplasm.
**Also you have to blow out the candle and relight it to start the summoning.
Added Ectoplasm - resource you can burn in witchlight torch or cauldron. Burns longer like anglergel.
Added a Ghost Monster Mask

Pumpkin seeds
Plant on the ground and grow Sugar Pie Pumpkins for cooking pie or eating.

Witch’s Cauldron
Can be used to cook up some fun

Witch’s Brew – Drink if you dare. Mwahahaha! Random effects and some will try to hurt you!
Pumpkin Pie – Eat or use to tame some of those rascally creatures that wish you harm.
Candy Corn – So good and gives you a candy buzz making you run around faster

Boom Box Skeleton
Plays 14 songs, Press E to Start or Stop the music. Stop and Restart will choose another song.

Song List:
*New* Werewolves of London by Warren Zevon
*New* Maniac by Kid Cudi
*New* Calling all the Monsters by China Anne McClain
*New* Horror Movie by Skyhooks
Voodoo Too by Godsmack
A Nightmare On My Street by DJ Jazzy Jeff & The Fresh Prince
Halloween Theme Song by John Carpenter
Don't Fear the Reaper by Blue Oyster Cult
Big Orange Monster by The DVDs
Dance with the Devil by Breaking Benjamin
I'd Be Scared If I Believed by Roymond (License: Creative Commons)
Somebody's Watching me by Rockwell
This is Halloween by Danny Elfman
Voodoo by Godsmack
Romance Keys by Click Click Click
Monster Mash by Bobby "Boris" Pickett
Thriller by Michael Jackson
Spooky Scary Skeletons by Andrew Gold

Ark Server Hosting in case you'd like to host your own server:
https://arkserverhosting.co.uk/clientarea/aff.php?aff=41

Mark Nov 15, 2021 @ 8:52am
Hello, sorry for my delay. It was present on all of our maps but the crash is happening only when removing it from the Valguero map - the other maps I was able to remove it successfully :) As for Valguero, I tried to re-validate the files after removing the mod but it still persists. The list of things I've done thus far:

- Removing just the mod ID from ASM but keeping the files
- Removing the mod ID and all file folders, deleting all traces
- The above plus re-validating the server files
- Asking players to remove all traces of the mod they've placed
- Using the DestroyAll command on all structures/spawns to hit any leftovers

It's a very confusing issue that may just have to be chalked up to ARK. It's just strange how adding the mod back after removing it, alleviates the crash as though there's something the server is now dependant on from the mod.

Thank you for looking into this for us <3

RandiLadyWolf  [author] Nov 14, 2021 @ 3:46pm
Can you try to re-validate the server files after removing the mod? Just a thought

RandiLadyWolf  [author] Nov 14, 2021 @ 3:44pm
One question, what makes you think it is referencing some object? I don't see anything useful in that fatal error except a bunch of gen2 stuff which I didn't use. Were you using the Halloween mod on the Gen2 Map? Which map were you using? It will help me debug this error.

RandiLadyWolf  [author] Nov 13, 2021 @ 7:56am
All I can really think of it the costumes. It seems possible that someone is wearing it and the mod doesn't have access to the player's character in order to delete? I'm very sorry this has happened. If it is the costume, please let me know so I can put a big warning message out there.

RandiLadyWolf  [author] Nov 13, 2021 @ 7:52am
Hi Thalana, that is bad news. I got your message and I'm not sure at the moment. Have you tried the kill all wild dinos? Maybe a bat or something escaped? It's so weird it doesn't let you delete the mod though. Everything should just disappear without issue. The costumes are new. Could someone be wearing it and it's not able to delete it off the player? It was the first time I messed with those costumes. It was a copy of the rex blowup costume.
< >