Store Page
XCOM 2>  Workshop > [OG]CombatMedic02's Workshop
This item has been removed from the community because it violates Steam Community & Content Guidelines. It is only visible to you. If you believe your item has been removed by mistake, please contact Steam Support.
This item is incompatible with XCOM 2. Please see the instructions page for reasons why this item might not work within XCOM 2.
Current visibility: Hidden
This item will only be visible to you, admins, and anyone marked as a creator.
Current visibility: Friends-only
This item will only be visible in searches to you, your friends, and admins. 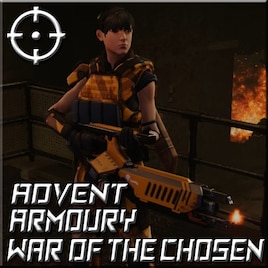 XCOM 2: War of the Chosen
Links

This item has been added to your Subscriptions. Some games will require you to relaunch them before the item will be downloaded.
In 1 collection by [OG]CombatMedic02
CombatMedic's ADVENT Gear Collection

8 items
Description
Introduction
Hey guys! I have returned! I couldn't let the new War of the Chosen DLC pass me by now could I? There is so much cool stuff in this DLC but the one thing I have been super excited for, since seeing them in the trailer, are ADVENT Flamethrowers. I have wanted flamethrowers in my XCOM since the game officially launched and trying to add them in was the whole reason I got into modding in the first place. Now the ADVENT have them and we can't let them have all the fun with those awesome looking flamethrowers now can we? :P

This one is a standalone mod that adds in ADVENT weaponry for your troops to use! Pick those weapons up off the floor and let's use them back on our oppressors! :D

At the Moment this Mod Currently Contains:
The ADVENT Purifier Flamethrower - A fearsome and sleek looking flamethrower that negates dodging and sets everything in its path ablaze! Originally designed to take out large numbers of the lost in one swoop it is equally as devastating against friend and foe alike. Keeping true to the ADVENT version it doesn't require reloading and inflicts modest damage at the price of destroying cover and item drops. The rangers are the only class that use these as the weapon is technically classified as a shotgun. Provides interesting functionality with skills such as Run and Gun though. I feel it's fairly well balanced, coming in a little weaker than rifles but with good perks to balance this out. Might need a little more tweaking but I'll wait for some feedback on that front. I feel it's in a decent playable place at the moment anyhow. It is now customisable with all in game patterns and colours. :)

The ADVENT Priest Rifle - Similar in design to the standard ADVENT rifles used by ADVENT forces, but supporting a higher rate of fire and greater damage output, the Priest's Rifle is truely a deadly killing machine. Being a rifle it can be used by most soldier classes and power wise it comes out just above the stock rifle. It is fully customisable with all in game patterns and colours. :)

The Darklance Replica Sniper Rifle - Manufactured from a standard XCOM Sniper Rifle but incorporating the technology of the Hunter's Darklance. This versatile sniper rifle is made from alien alloy making it surprisingly lightweight and inbuilt stabilizers allow the wielder to set up quickly after moving position to enable them to get back in the fight quicker. Fully upgradable and fully customisable this Sniper rifle looks as good as it feels to use. This sleek Replica Sniper Rifle will have you taking out targets like one of the chosen.

The Disruptor Replica Assault Rifle - Manufactured from a standard XCOM Rifle but incorporating the technology of the Warlocks Disruptor Rifle. This modified rifle packs a deadly punch that will leave all opposing forces decimated in its wake. Fully upgradable and fully customisable this Assault rifle looks as good as it feels to use. This sleek Replica Assault Rifle will make you as fearsome as the Warlock himself.

The Arashi Replica Shotgun - Manufactured from a standard XCOM Shotgun but incorporating the technology of the Assassin's Arashi Shotgun. Its longer barrel allows it to be slightly more accurate at range. Fully upgradable and fully customisable this Shotgun can match your trooper's camouflage to blend in as they stealthily dart in and out of cover like the Assassin herself.

The Darkclaw Replica Pistol - Manufactured from a standard XCOM Pistol but incorporating the technology of the Hunter's Darkclaw Pistol. This sleek pistol excels in close quarter scuffles and is a deadly addition to any Sharpshooter's arsenal. Fully upgradable and fully customisable this pistol will have you devastating opponents that get too close like the Hunter himself.

What's to Come and Conclusion:
I have worked on this solidly for a few days now, configuring the new modding tools and figuring out where all the new models are in the files and such so at the moment the flamethrower is the only weapon currently in this mod. BUT THERE WILL BE MORE! I'm planning on making all of my weapons customisable with colours and patterns and I also want to add all those awesome rifles and melee weapons that the chosen get now as well as a few other bits and bobs so stay tuned for more updates!

I am making all weapons upgradeable through all three tiers of weapons technology so that you can upgrade and use them throughout your campaign. All you have to do is complete your normal tier upgrade research projects, Magnetic Weapons and Beam Rifles.

As far as I can tell everything seems to be working as intended but a little more testing may be required. I didn’t have much time but was eager to share this with you. If you find anything that seems like a bug post it in the comments section and I'll try to get round to fixing it as soon as I can. :)

I hope you enjoy my mod! If you have any comments or questions feel free to leave them below and if you enjoy the mod please click that thumbs up button, rate and favourite it. :D

F.A.Qs
Q: The Flamethrower looks like it should be a Grenadier weapon why is it for Ranger only?
A: The Flamethrower was actually made as a shotgun variant by the developers of the game and as such it is missing a lot of coding and animation which would make it work with other classes. It also doesn't have overwatch which would mean Grenadier skills such as Suppression just wouldn't work. This weapon works very well as a close range Ranger variant and I do not intend to do the days of extra work to make it work with other classes when the outcome would be buggy and ultimately not worth it.

Q: Why does the Flamethrower seem weak compared to other weapons?
A: The Flamethrower damage stat is balanced to be just slightly under the stock rifle this is in line with the version ADVENT Purifiers use and is fine when you take into account that it is able to hit multiple targets in one turn. As well as this anything you hit will take burn damage from the burn status that will be applied to them so you are actually getting a little extra out of it in reality.

Q: Why does the Flamethrower tend to miss a lot?
A: While the Flamethrower does negate the dodging stat it still takes cover bonuses into account. You may not hit targets that have good cover as they will duck behind it. Flanking targets is always a good idea and will help you hit what you are firing at. Furthermore the Flamethrower doesn't actually use the AIM stat. It doesn't work like any other weapon and instead uses its own stats called RANGE, RADIUS and TILE COVERAGE. I'm not sure how these stats affect the "aim" but if you would like to make the weapon unrealistically powerful you can tweak these values in the .ini files.

Q: Is the Flamethrower upgradable?
A: Yes it is! It will upgrade through all three tech tiers gaining small damage increases in line with the stock rifle.

Q: Why isn't the Flamethrower better against enemies?
A: Because quite simply it wasn't designed for combat. It was made to eradicate the lost from urban areas. You CAN use it in combat, it does have its advantages but there are also disadvantages to using it over the stock shotgun. Bring the correct tools to the correct mission and you shouldn't run into any issues. The Flamethrower has a lot of strategic value. You can hit multiple targets with it, destroy cover and deny your targets access to parts of the map.

Q: Can you lock the flamethrower behind the Purifier research?
A: I could but seeing as the first Purifier corpse you get is in the third mission of the game I don't think there is really any point to me doing this. Just seems like I would be wasting my time really.
Popular Discussions View All (6)

Upgrades for some weapons not showing up
Leongwj

[OG]CombatMedic02  [author] Sep 29 @ 12:50pm
@ПΛПО Dragoon Because you can move and shoot with the darklance, it's not just a reskin so it costs a few more resources to upgrade it.

@Grimjaw I need to fix this for the reskin guns still but I've been rather busy lately life wise and haven't had time. It is something I want to do though.

ПΛПО Dragoon Sep 28 @ 7:41pm
@why is the darklance a seperate tree when the other guns share with thier respctive counter parts? The rifles are all upgrade at the same time, but the sniper requires another 160 supplies and 20 alien alloys?

ManChildOfDoom May 11 @ 11:04pm
be nice if this worked with this mod [WOTC] Chosen Rifles so i can have some color for them

Johnny_Black_Jackal Mar 28 @ 1:48pm
Thanks, I found the chemthrowers changed the stats to match yours and applied the weapon to most of the cannon classes. I also gave my Sectoid (playable aliens) the option to wield shard gauntlets, long war primary gauntlet, and glaive.

[OG]CombatMedic02  [author] Mar 28 @ 12:25pm
@Johnny_Black_Jackal You can actually do this yourself by adding shotguns to the grenadier class. You can find how to do that here:

Johnny_Black_Jackal Mar 28 @ 10:40am
Hey, love the mod, I know it's hard so feel free to tell me to fuck off but do you think you can make the flamethrower that can be used instead of cannons? I always felt it looked like a heavy weapon so I've been using it exclusively on classes that can use either a shotgun or cannon.

Ty Mar 22 @ 6:02pm
Yeah I agree with some of the others. I love the flamethrower on the technical class but I don't like seeing all of the other weapons added, I have to hide them every time I start a new campaign

[OG]CombatMedic02  [author] Feb 20 @ 3:33am
@Flamew1ng Still looking for a coder to help me with that, not had much luck so far. I could probably add the Assasins Katana but I want to get the bugs ironed out first.

Flamew1ng Feb 20 @ 2:45am
Any updates on the state of the disabler code? Also, any plans to add the Assasins Katana?

I haven't played WotC for a year and i'm now looking to make a comeback. Not telling you to hurry or anything of course, just asking what's the current situation
< >