Store Page
Unturned >  Workshop > Krodeon's Workshop
This item has been removed from the community because it violates Steam Community & Content Guidelines. It is only visible to you. If you believe your item has been removed by mistake, please contact Steam Support.
This item is incompatible with Unturned. Please see the instructions page for reasons why this item might not work within Unturned.
Current visibility: Hidden
This item will only be visible to you, admins, and anyone marked as a creator.
Current visibility: Friends-only
This item will only be visible in searches to you, your friends, and admins. 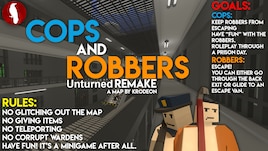 Krodeon
Offline
See all 40 collections (some may be hidden)

This item has been added to your Subscriptions. Some games will require you to relaunch them before the item will be downloaded.
Description
Cops and Robbers Classic remade in Unturned!


After the update for Germany adding the Castle quest, TheUnion realized the Warden's key could be used for much more. I also realized that being in that discord call was the greatest thing that happened to me that week. After playing around with the easter egg I started getting around to this map. Took a 2 week break and then just burned through making the map in its entirety.

Features:
Near 1:1 replica of Original Minecraft Map.
New features taking advantage of Unturned's items.
More details than Minecraft would have allowed.
Kill volumes making sure that you don't escape where you're not supposed to!

Rules:
No cheats.
Roleplay it out, don't make gameplay stale Wardens!
Prisoners follow the Warden's commands, but try to escape without being suspicious!
NO THIRD PERSON

For the Best Experience:
Normal or Hard for Bullet drop and Bleeding.
Item Spawn Chance 100%! You need this to guarantee certain items will spawn so you can actually escape!
Item Durability 100%, helps for both prisoners and Cops.

The Rear Exit:
Surprisingly poorly guarded. Grab the Warden's key so you can access the 2nd floor and the walkway and just simply run for it! You win when you hit the ground outside of the jail.

Coalition's Getaway:
The Coalition wants you out. Who knows why, but who cares why! There's a blind spot that the watchouts can't see and you're using that blind spot to glide out! Some crazy skyjumpers crash landed on the prison. They were sent to the nearest hospital but the plane and their gliders are still here. Make sure no one sees you take them and when it's clear, find a ladder in the storage and finish the ladder leading to the roof! Go to the other corner where you'll see the coalition spray paints and jump to the parking lot! They're already waiting for you in a van, just go!

YOU CAN NOW PLAY THE MAP MULTIPLE TIMES WITHOUT RESTARTING. REQUIRES RETURN OF KEY AT SPAWN, MANUAL ITEM RESETS AND MANUAL TELEPORTS DUE TO NPCS ONLY WORKING ONCE.