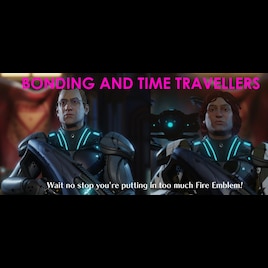 RealityMachina
Offline
See all 62 collections (some may be hidden)

This item has been added to your Subscriptions. Some games will require you to relaunch them before the item will be downloaded.
Description
NOTE: I am not planning to work on this...well, ever.

Feel free to take it and upload a fixed version if you want though, I don't care.

Thanks to a contrived set of coincidences, a dark future, and an apparent time machine future Shen built (unfortunately it only goes as far back as 2035), the future children of your soldiers will be ready to serve on the Avenger as soon as two soldiers get busy!

Why?
Because I could.

No seriously why?
Because if I was any good at animating and modelling I would be half way towards making lamia soldiers right now. As is my ♥♥♥♥ post- level mod is going have to be this one.

Does this really require Squad Cohesion
I'm going put it on the required list since I don't think you're going be reaching 100 *between soldiers* the natural way for a loooong time, but since it uses the same internal squadmate score system as part of the game, it can actually run sans Squad Cohesion.

So how does this work anyway?
Go to a soldier in the Armory, click on Find a bondmate. If anybody meets the requirements, click on them, click through the resistance communications thing (it's basically a dummy alert to do all the magical kid stuff), then exit out of the armory.

You'll notice the number of soldiers has gone up, go back, and find the new kid waiting to be promoted to Squaddie in the menu, with two additional cross class abilities from their parents (or psionic/lightning reflexes if the parents weren't the base 4 classes) by default.

(I may change that depending on how many people use low rank soldier training mods like All Soldiers Gain XP or Patrol Training with this.)

The parents who participate in the baby making will not be available for more baby making afterwards, those looted exo-wombs don't come cheap you know.

saximaphone Apr 22, 2018 @ 1:28am
There's still a chance somebody will pick it up again.
I would help if I had the time to study how the game works better.

Quinta V Sep 12, 2017 @ 10:46pm
It's really saddening to see this mod abandoned, it's a great concept that should be fleshed out with the new mechanics on bonding with the DLC relationship implementations. With that said, would this Mod work with the new War of the Chosen DLC? (haven't tried yet)

saximaphone Jul 13, 2017 @ 11:39pm
That bug has been in this sinse the beginning.
He said he fixed it before he abandoned it but I guess it still happens.

Moeren Jul 11, 2017 @ 6:04pm
i have tried some different bondings. I noticed that you should not bond both of the same class and at least one of them must be a vanilla class - else it will crash.

「死の火」 Yamino Takamaru Jun 12, 2017 @ 1:23pm
@($S360)Aeronautic & B.Collier (Northern Epsilon): Quote from the description of squad Cohesion: "This mod puts a dash of Fire Emblem into your XCOM, leveraging a "squadmate score" system left in by Firaxis to give small buffs for squads that trust in each other." ...so, that's officially cut content, guys. XD