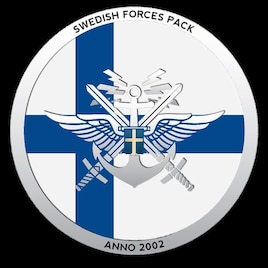 granQ
Offline
See all 607 collections (some may be hidden)

This item has been added to your Subscriptions. Some games will require you to relaunch them before the item will be downloaded.
Description
Introduction
This is a tribute to the orginal FDF mod for Operation Flashpoint. One of the best (if not the best) mod ever made for the Ofp/ArmA series.
We also like to say thanks to ArmA3Finland for hosting some really good PvP against Sweden.

This tribute was made by members of the Swedish Forces Pack, mostly however by Megadeth, granQ, Vccv90, coding/servers by Dahlgren and trailers and videos are made by Sango.

Future updates
Depending on how many subscribers/favorites we get we might continue to support this mod with additional content.
For that reason we are looking for talented people that can help with models, textures but also coding.
What is planned of high prioritize is the RK 62 rifle, the Bv 206 all terrain vehicle and the Combat Vehicle 90.


Thanks to Purenexus and Irratium for the Cv9030 model, check out their mod to Squad. ( http://forums.joinsquad.com/topic/30671-fdf-mod-finnish-defence-forces/ )

Nigward Mar 21 @ 1:30am
Yes indeed the uniforms and gear are quite poor i hope you will work on these soon

CLBT Mar 5 @ 6:32am
Are you guys planning on updating the gear the soldiers wear? They look very low quality compared to the ones shown on the mod pages screenshots. And the combat vest is way out of portions, + a M/91 Sirpa would be really neat to see.

Ahjo Feb 25 @ 6:43am
In Eden editor nh-90 seems to be the only helicopter which doesn't have it's engines set on if you set it into flight altitude. Anyone else getting this?

Will this be fixed?

[D3RP] Hythloday Feb 23 @ 12:17pm
Any intention on using SFP's uniforms re-textured in Finnish M05 here? I'm sure it's not accurate but you guys did a great job with the models in SFP comparatively. Big thanks for content creation, I got a lot of Finnish maps to play on thanks to Tempa lol.

Durovnax Feb 20 @ 8:27am
When are you replacing those disgusting vests?

Sota Feb 16 @ 10:09pm
Really good mod, but the only problem I see its that the vests are very large and disproportionate, do you have any plans on fixing that problem?
< >