Please don't shoot me!
500 XP
I'm an avid gamer and respected writer of things unrespectable. I'm a wombat — intruders die in my burrow. I have a bomb shelter made of square poops. Step inside, and you'll wish you didn't.
View more info
Currently Offline
Profile Awards  23 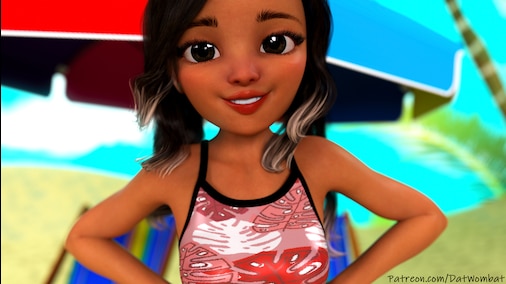 Hannah at the Beach REVISITED

League of Maidens
29 Hours played
Jiggle! Jiggle! Jiggle!
(Adult) Content
(F) Nudity.
Censorship?
No. Woot! Woot!
Hours of Gameplay
'til Heck freezes over.
Modding Support?
No.
Patch Available?
Purchase in-game.
League of Maidens® is a free-to-play single-player action-RPG about a woman’s stand against Atonia, and her campaign of chaos throughout the multiverse.

Honestly, I get where the negative reviews are coming from but. . . the game ins't that bad once you actually play it. Don't get me wrong, I have complaints too (read my full review), but I'd be playing this game right now if I didn't have obligations to write other reviews.

Gameplay
Grind! Grind! Grind! Kill! Kill! Kill! Jiggle! Jiggle! Jiggle! Once you choose a “class” and create “maiden”, it’s off to explore the world (after a few hours of tutorials). There are five classes, which determine the weapons and abilities your character is allowed to use. The game is divided into vast, explorable areas — they are populated with baddies, dungeons (or “strongholds”), and quest givers. Progression is directly tied to your maidens’ stats and levels. You’ll have to rerun dungeons and quests hundreds of times to gain the necessary materials to unlock new content. As the story progresses, you’ll gain access to increasingly difficult areas and bosses. Upgrades typically cost one or more “materials” — like progression, upgrades also cost time and grinding. Using the Motion3D camera, you’re able to stop time to snap photos of your gameplay. Alternatively, you may pose your maidens any way you please via Pose3D mode!

Story
Atonia, she who transcends time and space seeks to usurp Zeus as ruler of the multiverse. The United Nations Defense Council (or “UNDC”) is humanity’s last stand against Atonia’s army, the Fall. Through the Project Warmaiden, the UNDC produces “Warmaidens”. Warmaidens are genetically enhanced humans; they are stronger, faster, smarter and more resilient. Led by Merica Johnson, the League of Maidens are the most powerful humans ever conceived. However, they have been corrupted by Atonia’s destroyers, implements of her chaos. The fate of the universe rests on a single fresh-faced recruit, a Generation Seven Warmaiden. It’s up to her to unite the what remains of mankind, and thwart the evil machinations of Atonia.

Visuals
The title menu looks great (but it’s not very exciting). From “Settings”, you may adjust a wide variety of audio, display, gameplay and graphical preferences. League of Maidens® features heavily populated, spacious worlds and quite a bit of visual effects. Due the speed of combat, it’s very important to maintain smooth gameplay — thankfully, the Settings menu offers a robust control panel to finetune your performance. I ran this game on a laptop with an RTX 2060, and I was able to maintain a consistent seventy FPS (or frames-per-second) The game looks and feels premium; however, the variety of enemies, outfits and environments clashed with each other. The overall aesthetic of the world doesn’t always work out, but it at least it looks pretty!

What kind of dumbass would pay thirty dollars for tiddies?!

Oh. . . yeah, that’d be me. The price of nudity (among other cosmetics) can be reduced (by twenty percent) via a Maiden+ membership, which starts at seven dollars (for a week subscription). Alternatively, you may purchase the “Shower Pack” (for ten dollars), which allows you to undress your maidens in Pose3D mode or designated “showers”.

Also, the jiggle physics — easily the best part of the game, hands down.

But if thiccc ladies (with three “c”s) aren’t your thing, you can always make a “lolimaiden”. . . like me!

Verdict
It’s worth a try, but temper your expectations (and your wallet). League of Maidens is an interesting specimen; it’s a single player experience with aggressive free-to-play elements. League of Maidens requires the same dedication and investment as a competitive online multiplayer game. You’re expected to log-on everyday, and complete your daily missions and dungeon crawls. It takes days of game time to get anywhere — but arbitrary, daily limits will force you to spread your playtime between weeks, if not months. League of Maidens® is designed to be a daily ritual — but that’s exactly what some people are looking for. League of Maidens® is rough around the edges, but it’s a framework for something beautiful. If Maiden Gaming Inc. eases the grind and free-to-play nonsense, League of Maidens® would be on track to enter a league of its own!