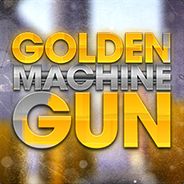 Golden Machine Gun is a relic of the past.

Hello! Today, it has been a month since the TENTH birthday of Golden Machine Gun. To be quite honest, I had forgotten at the time. My life has changed exponentially in the last few years, which I’m sure many of you can relate to. Time really flies now, doesn’t it? This is probably my eighth draft or so of this announcement in the past four years, but here it finally is.

Perhaps you came here expecting another reboot of the servers, or some sort of new GMG game. You probably weren’t expecting a clip show and a final announcement. With no website to broadcast to, the Steam group looking like a desert, the Discord server boasting a lonely 45 members, I’ve chosen to return to the video format in hopes that this echo resonates to those who still linger somewhere on the web.

First off, I want to thank everyone who was a part of Golden Machine Gun in any way during its lifetime. The regular players on the server, the posters on the forums, the contributors, the friends I’ve made, even the individuals who vowed revenge after being banned; thank you for joining the adventure. We started as a stupid little achievement server, and ended as a stupid big achievement server (with benefits). I’ve seen ripples from the end of the GMG server in the TF2 world, and it’s heartwarming. The community really only exists now as a memory, as we’ve all moved on to bigger places, and although we still have occasional get-togethers, the special times are embedded in the past. As they should be.

For myself, GMG is where I grew up. School and real life friends became less important when I could come home and create what I enjoyed and have hundreds of people enjoy it too. It’s a part of me as much as middle and high school are, realistically even more so. This is where I both put my time and cared to put my time. I know I will never see something like it again in my lifetime, as I will never go through teenagehood again. Just a few years ago I said I’d like to continue GMG’s spirit, through two different games: a single-player adventure through the expanded environments of Chambers, Tunnels, and Butterfield, and another multiplayer VR experience emulating the hangout with minigames nature of The District in Chambers.

These days, I feel that gaming industry is gross and the market oversaturated. I feel no impulse to contribute anything. I have no drive to make loads of money, to become famous; if anything, it’s repulsive. As one of my favorite artists Bo Burnham once said, “if you can live your life without an audience, you should do it.” If I’ve learned anything from GMG, it’s that true happiness doesn’t come from the game of capitalism and fame. If I’m going to make a game, or anything really, I’m going to do it because I enjoy it and I think others might too. What made GMG’s server unique was, quite frankly, not much. Most of its major features were just taken from other games I was inspired by, the actual unique stuff few and far between. The maps were weird, and they were bland. It was always the community and its evolution that made it special, and it’s not something I can get back.

Back in 2007 we were provided with a truly outstanding video game, and through its highs and lows it gave us a whole lot of enjoyment. Ultimately, I do have a lot to say about the direction of Team Fortress 2, Valve, and Steam as a whole, but I’ll keep those less-than-positive thoughts to myself. I believe that nothing lasts forever, and shouldn’t be forced to. I know that the Golden Machine Gun servers were reaching their end point around Chambers v60’s release, and I’m happy that we pulled the plug before it had long passed its expiration date. Why ruin what it once was? For what, greed? Pride? Unnecessary. All good things must come to an end.

We’re at a point in time where the group exists in a limbo, with no home base but still the occasional event. A lot of people continue to say “bring back the servers”, but it’s really not what you want. What you want is gone, lost in time. Let it stay there. The future holds so much more, just not from me. Last week, my childhood home burned down in the California fires. All of Golden Machine Gun came from within that house. That just reinforces to me what needs to be done. We’ve already said goodbye to the servers. Today, I’m putting the entirety to rest. There will be no more for Golden Machine Gun, it’s time for us to move on.

This will be the last video posted on this channel. Our history will always stay with me; all the updates, events, drama, fun. I really hope you enjoyed it all. If you’d like to stay in touch with the group members, we have a Discord server (https://discord.gg/QXGQRh5). I don’t do a whole lot these days besides random passion projects, but if you want to stay updated with what I’m doing anyways I very occasionally post what I’m working on to Twitter (https://twitter.com/noodleboy347). Thanks for watching, reading, and enjoy the rest of your lifetime. Farewell, friends.

Lemar Sullivan Sep 18 @ 4:30pm
VVV this. Would be much appreciated VVV

Lumi Sep 18 @ 7:25am
Does anyone have a collection of all the maps that I can download?

Lemar Sullivan Aug 18 @ 12:40am
god, I loved the GMG maps. too bad they no longer exist (to my knowledge). this takes me way back, back before the mann-conomy update and me loosing my main account

messing around in the admin rooms, having rooms you can open/close with a door, swimming in a pool, and in general just messing around like the simpler times

Aethierion Jun 3 @ 2:58am
Man, looking back at this relic really hit hard. I would think this was my first community group that I was interested in being part of; although I was the very quiet one, just lookin' yonder.
Back then I had a cursed amalgamation of a name, might recognize the name Novatuxo-Zretax or Xeno-Novatuxo Zaino-Zretax or some other cursed name.

ProfesSir Syko Jan 8 @ 10:44am
Just stopping in to say this was my home in Team Fortress 2; with a special shoutout to Jewish Pickles and Noodle for always being an active, helpful part of the community that made it feel like the family I've missed for so many years now. Like noodle said, a lot happened to TF2 over the years, and nothin' lasts forever; but I'm making sure to take those memories with me (From getting my first hat drop, to participating in the soldier/demo wars, to all the map changes in between) there was always something going on that managed to get everybody else involved, and pull us away from the traditional gameplay we'd known at the time.
Thanks again, everybody- I'll never forget you guys!
< >
VIEW ALL (2,125)
GROUP MEMBERS