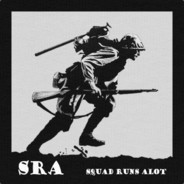 About us
We are a semi-competitive gaming clan that plays Squad. We value active members and therefor hosts weekly squad events where we get together on a public server and tries to play the game, teamwork and have fun.

Our Core Values:
Recruitment
We are open for new members. You will join as a recruit and will be considered a full member after you have 15 hours in our discord voicechats. We check this the 1st evey month and you need to have been recruit for atleast 1 week.

We are looking for individuals who:
Our requirements are:
Application to join
To become a ~SRAr~ Recruit. Join us on our discord[discord.gg] and contact a Recruitment Officer (RO), Mod or Admin and let us know you either want to join us or check us out.

NOTE!!!
We do NOT accept Steam Group membership requests without talking to you on discord first!

As some of you already know we have begun the first steps of transforming the clan into a general gaming community.
With that also game some changes to our rules and events so please review them.

Feel free to contact Klifinpol or Roxer for any further questions you may have. I will also say that we have an All Clan Meeting coming up this Saturday
(30th of march at 18:00 GMT+1).

As some of you probably already have read Fox is planning to leave SRA because we are in a coalition with Squad Europe and he has shared his view why he can’t support them. After what you have read you may wonder why we are still with them. It is our (mine and Roxers) view that things can be changed within the community and things have changed in the few months we have been there. For example 95% of our suggestions towards the rules been met. The community is constantly improving and although its not perfect one. we see the effort to become better. Their is now an admin guideline where common offences and their recommended consequence is listed.

About admin abuse. SE takes admin abuse seriously and investigates all accusations. You can now report admin-abuse anonymously in SE discord. #squad-admin-abuse and it's only the highest ranking FC guys that can read it. They have not tried to silent any accusation but asks that it's done in private. I agree on this that either you take something up directly with the person involved or the clan leader/representative.I wouldn't want to be called out in public for a mistake but i want to know if i have made one. If you don’t want to take it with that person directly you can report it to your clan leader or the FC administrators. The concerns the fox brought up about admin abuse have been dealt with and they have been reprimanded.

So for the time being we don’t see a reason to leave SE. However this doesn't mean that we will stay forever. Obviously the best thing would be to have our own server but its not possible with our numbers. Should the majority of the clan feel against Squad Europe we will of course rethink this but for the time being we feel that staying with SE is the best for the clan.