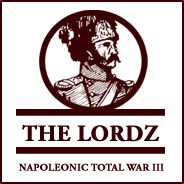 NTW3 version 7.5 has been released. Read more about it on our forum !

NTW3, short for Napoleonic Total War III, is an in-depth modification of the original Napoleon:TW game. In this latest version we added the short lived Irish Republic of Connacht of 1798, the army of King Joseph in Spain and the British expeditionary corps in Egypt in 1801, bringing the total number of factions to 50! A staggering 2500+ units are present with each one having its specific and researched uniform with also over 100 available maps unique to this mod.
Our ever-growing multiplayer community has reached several thousand members and is particularly active online on our discord server. Drop a message in the general chat and we will take care of guiding you through the elementary steps of playing this fantastic Napoleonic simulation.

Download & instructions[www.thelordz.org]
Join us for team play on our Discord Server[discord.gg]
Help us in promoting the mod and receive exclusive content on our Patreon[www.patreon.com].

Support our work on Patreon[www.patreon.com]

-Distinction between armoured and non-armoured heavy cavalry. Armoured heavy cavalry is slower (C1-C2) but has much better defense than non-armoured (C3-C4)
-New faction: Russian Imperial Guard (1812-1814)
-Spain 1808 climbs up to 10-points, with 90 new units, and major stats review
-Spain 1812 gets 60 new units, with also a wide stats review
-Prussia 1813 goes down to 9-points
-40 new units for the Holy Roman Empire, with several changes for its infantry stats
-Light cavalry and lancers get an overall lower defense
-Infantry generals can't inspire anymore (can still rally)
-Fighting generals price reevaluation, cheap ones are more useful
-New mechanic for melee-able skirmishers
-Ammo correction for Prussia 1806 and several underrated generals
-35 new generals in many different factions
-Correction on some generals' portraits
-About 250 new detailed descriptions of units and biographies
-New theme for the Russia Imperial Guard
-Mass rout effect slight increased
-Countless minor stats changes
-In-game flags are square-shaped, as they used to be
-MP hosting settings: only medium funds and medium unit size can be selected(modifié)
-Correction of a small issue caused by the NTW:Definitive Edition update
-More detailed uniforms for the Peninsular faction
-Chevrons removed from French Guard uniforms
-Many uniform bugs corrected
-400+ cards redone or corrected
-Screenshot mode (in the launcher) corrected
-Only compatible hosted battles are displayed in the lobby
-In the MP lobby, the map and duration are displayed

Scotvince Jun 15, 2019 @ 12:17pm
Hello. I am a newbie at this mod. I am looking to know how I could play my first battle. There is no game into the servers. Are there precise periods for multiplayer events ?