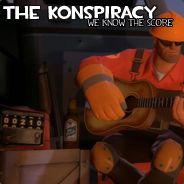 KSE started by tracking North American TFC leagues giving these clans one site where they can compare themselves with clans from other leagues via a stock exchange point system.

With TF2 this will once again be done and we hope to track leagues from all over the world.

Fortress Forever is also going to be tracked seperatly from TF2.

The Konspiracy Gaming League.. We've been wanting to do this for a long time. Unfortunately TFC's popularity was already declining when we first had our ideas about this league. Now that TF2 is finally out and is very popular we believe it's time for Konspiracy to have it's own gaming league! We have the resources for it and we've had multiple clans suggest us that we should start our own league... So here it is.

kGL is a season / playoffs based league where clans get to play season matches and top clans in the league get to make the playoffs. It's a concept that was first introduced by the TFL in TFC, but have been doing weekly titles for a long time now. We thought it was time to bring back some one of the unique formats for TF2. kGL was originally going to be a ladder, but we're leaving this to the OGL. We're not here to compete with another league but more to provide the community with another choice.

We will be looking for staff to help with the league, so if you are interested please contact me in the KSE forums or on irc, #konspiracy on irc.gamesurge.net - if you have any questions, i will be more than happy to help you. You may also contact kevin or dinosaurgas should I not be around!

If you're interested to participate please sign up on the site, as soon as the teams you create have at least 8 players listed they will added.

All matches will obviously be tracked on the KSE. For now the match day is planned for Sundays. We originally wanted to take Mondays, but seeing as IGL has decided to take mondays, we didn't feel it was right to compete with them. We are planning to start matches on 2007/11/11.

I hope to see all the teams from KSE participate

The day is subject to change, should clans feel another day would be more appropriate

I sent messges to Wireplay, GotFrag, The ESL, IGL, OGL and Enemy Down leagues.

If your clan plays on those leagues, ask your admins to be tracked by KSE and if you know of other leagues, let us know in the KSE forums.