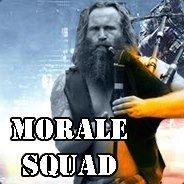 When the soldiers are in despair, the Morale Squad will be there!

Welcome to the revived Morale Squad! With the rebirth of the group, there is a plan in action to include more interaction than in previous group meetings. The rules are still the same: Your name should be Morale_Squad_X, X being your name. The flag we shall carry will be the golden bugle with a green background. This will provide unity and designate us as genuine music enthusiasts.

On to combat. Limitations on fighting are relatively nonexistent (save for when in a line battle). Outside of official regiment-styled meetings, fists, swords, pacifism, and scavenging weapons are all approved methods of combat. Personally, I try to refrain from fighting but will more than often fisticuff in personal defense. Of course, most limitations are optional 90% of the time and feel free to do whatever. That, then, is what they say about combat.

Other than that, the game is in your hands. Keep it safe, morale-based comrades.

"We will forsake our instruments. We will leave our conductors behind us and become one with this song. We have no sheet music, no chorus, no metronome, we play where we're needed, playing not for country, not for government, but for ourselves. We need to reason to play, we play because we are needed. We will be the deterrent for those with no other musical talent. We are Musicians Without Borders, our purpose defined by the instruments we play. We will sometimes have to sell ourselves, and songs. If the times demand it, we'll drummers, fifers.....bagpipes. And yes, we may all play Highway to Hell, but what better song than this? It is Amazing Grace. Our Treble, and our Bass. This, is the Morale Squad"

-Big Boss
VIEW ALL
POPULAR DISCUSSIONS
VIEW ALL (3)
RECENT ANNOUNCEMENTS
So long and thanks for all the fish
April 25, 2014 - Walther_White | 0 Comments

Salutations, comrades. I would like to extend our thanks on the behalf of the Morale Squad for the fun times and shenanigans. Unfortunately, of the six who originally showed up to the event, and that number has now sadly dwindled down to myself for the past two weeks. So it is with a heavy heart that I must state that the Morale Squad will no longer be able to attend a weekly meeting.

Perhaps, in time, I will find the proper reinforcements to make a triumphant return to the battlefield. Look to my coming on the first light of that day. At dawn, look to the east (or the forum pages). But until that day, I must place organized activity on hiatus.

"Farewell, my brave Hobbits. My work is now finished. Here at last, on the shores of the sea, comes the end of our Fellowship. I will not say "do not weep", for not all tears are an evil." - Gandalf

Finally set up a Teamspeak again, IP is 68.185.176.219, and we're gonna use it for tomorrow's Line Battle (8pm central). This will ensure proper coordination and distribution of morale. I'm likely going to be getting on it somewhere around 7:30, and will be getting mentally prepared until the event starts. Not sure if it's important, but I also have the permission key to make you a normal member of the teamspeak and not a guest. The code is SY5TwGbmjLYj7Bwp9ZqicGEW0QRNahafHRRjMmGe. Server might be down before the event, though, so just take note of that

Read More
VIEW ALL (25)
STEAM CURATOR
The Morale Squad reviews
"Games with fantastic, well-built morale mechanics, as well as any game that may raise the morale of downtrodden troops."
Here are a few recent reviews by The Morale Squad