Hop off the train and into your new life in the village of Hokko! Take over the old workshop and get creative; use crafted materials and design everything in town! With complete creative freedom, what type of town will you build?
Visit the Store Page
Most popular community and official content for the past week.  (?)
Hokko Life Devlog #11
Apr 1
Hello and welcome to this month's Devlog!

Character Work
February was primarily focused on character work. With the character artist getting stuck in creating new bodies and heads for the villagers, I worked alongside them setting up the skeletons and transferring animations from the avatar into them. This proved to be a lot more hassle than I had first anticipated, and resulted in some very frustrating days! Thankfully I managed to work out a lot of the issues and we now have a large amount of the main characters in the game.

Some of the main characters in the game

Now that the new bodies were set up for animation, I fixed a bunch of bugs causing strangeness with villagers interacting with objects and with one another. I also spent a little time making sure their conversation animations worked, as well as adding small short movements to help make their conversations feel a bit more alive (before they'd just stare at one another not doing much) 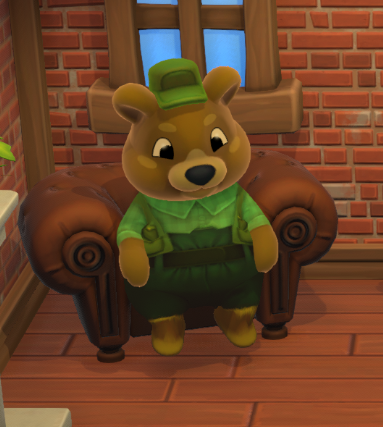 Fisher sitting in a rather comfy chair

Usability Results
We got the results back from the usability testing that was done last month, and they were generally positive, especially given the stage in development hokko is currently in. A lot of issues the playtesters encountered were bugs, or places where tutorial was lacking; both of which are easily fixed. Thankfully everyone responded that they wanted to play more of the game, and would definitely buy it, so that's good!

Support for audio
The last part of the month was spent helping out the audio folks at Team17, adding code where needed to trigger sound effects. Towards the end of the month the majority of the game had sounds hooked up, and a bunch of issues we had with music not fading properly etc got fixed too.

More Art
Following on from last month's update to the shop the Izakaya (Inn) location got a visual upgrade too. Based on reference photographs and a very rough block out we ended up with a really cosy location that I'm very happy with. 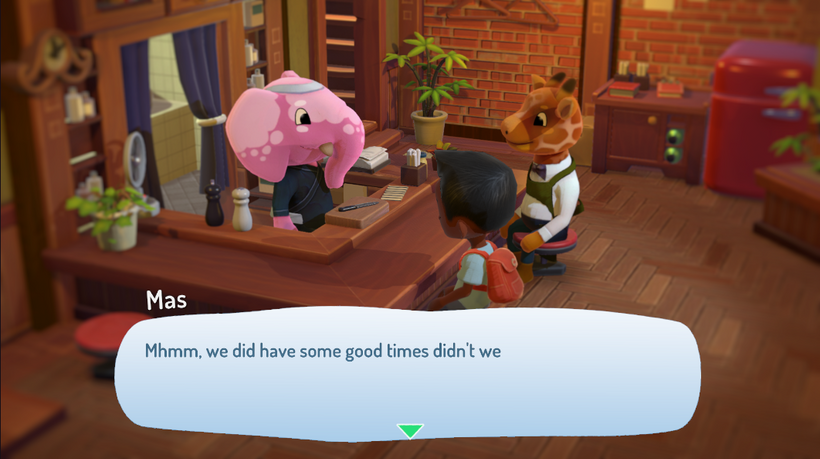 The Shop keeper and Inn keeper chatting in the Izakaya

And that's February! March will be focused tying things together as well as a big push to fix a lot of bugs, meanwhile adding new content from the artists as it comes in.

Thank you for your continued support as I work away on Hokko, please do let me know your thoughts in the comments!

Catch you in Discord!

Fish, farm, craft, design your own furniture and make a home for yourself in the peaceful town of Hokko!​

Get ready to live your best Hokko Life!

Well well, January disappeared fast didn't it!? In a blur of dark winter days and a little snow work continued on Hokko. So let's have a peek at what got done!

Lighting
I fixed up the lighting setup in the game so that it does things properly as opposed to the sort of half-finished setup I had before. This has meant the world and items have started to sit a lot better together, and have a more uniform look. Alongside this I went in and configured lighting for the different times of day, as well as several different summer weather types: sunshine, overcast and rainy.

To help me configure the lighting I built an editor window that allows me to change between times of day and weather when the game is running, and then live-edit colours for things like the sky, and tweak values for the sun intensity and other stuff. It made previewing and working on the lighting a lot more pleasant! 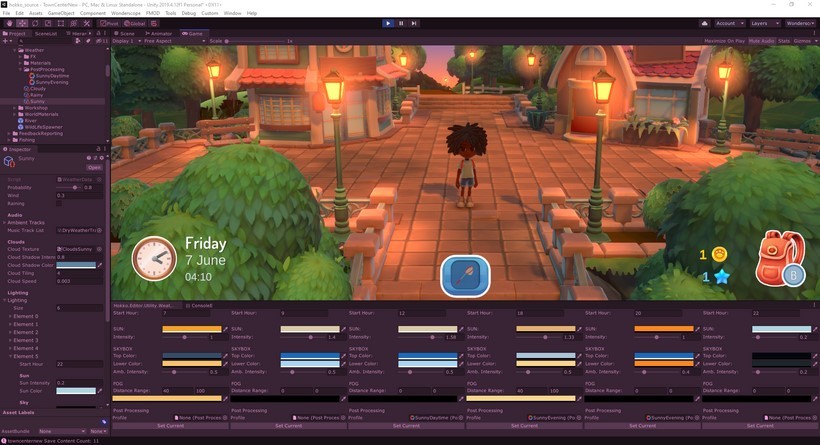 I also made sure things like the lights on streetlamps and houses were working too, and I managed to find an ambient occlusion setup that supports my custom-lit character shaders! (Ambient Occlusion is an effect that gives the appearance of contact shadows and darkens areas in crevices etc, where light naturally doesn't reach)

Timeline of Lighting on Sunny and Overcast Days

Game Intro
Most of my time this month was spent between two things, the game intro, and usability testing preparations. I completely reworked the start of the game, adding a small cutscene as well as going through and setting up quests for the player that guide them into the game.

By completing small requests for the villagers, you'll learn and unlock the systems in the game, and my work this month was focussed on writing the dialogue for these, as well as locking off parts of the game until the player reached certain parts of the quest line.

I even set up a very short cutscene that hints at your arrival in the world. It's really not much, but is far better than nothing! 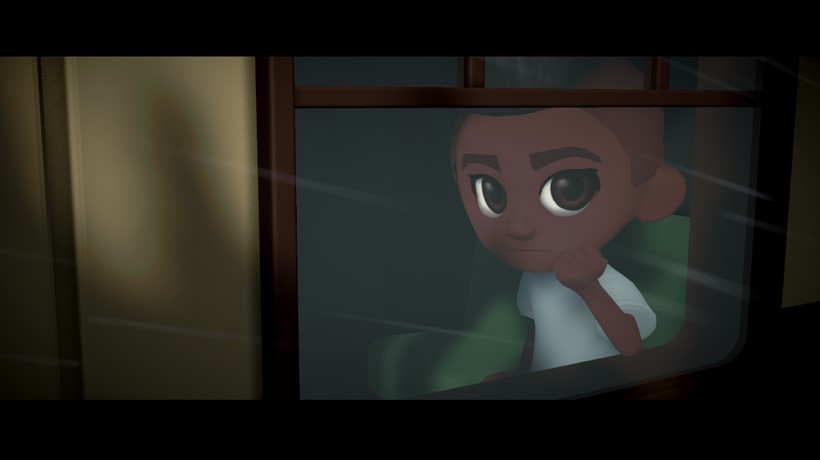 Usability Test
Like I say, the other major time-sync of this month was getting things ready for usability testing. What this means is we set a bunch of testers on the game to gain feedback on areas that are confusing, or that they struggle with. Doing this enables us to get really useful info on what parts of the game could do with some work on user experience. It's very easy to not see these issues when you're working on the game, as you understand how everything works; so getting fresh player eyes on it is extremely valuable. To make sure the build of the game the testers were playing was stable and had most of the rough edges smoothed out I spent a bunch of time this month squishing bugs and making tweaks.

I've not got the results back yet, but I know it's going to be very interesting to see what their report says!

Mine
With some of the remaining time I spent a day or two on the mine/cave part of the world. I replaced the old wall graphics with new meshes and also implemented a gameplay idea I'd had for a while.... darkness!

You won't be able to stray too far away from the light in the caves now, and will need to place out light sources to enable you to see and head deeper into the mines. This really enhances the feeling of exploration as you move further and further into the darkness and I think it offers a nice change of pace and gameplay feel to the rest of the game. 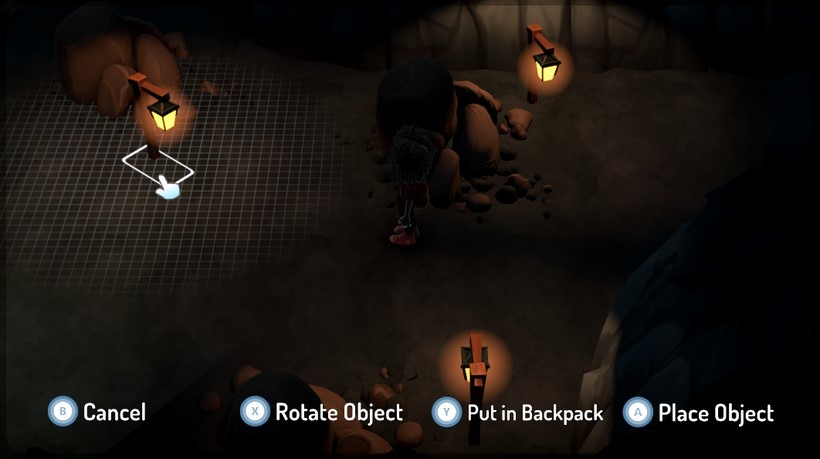 Placing lanterns in the mine to progress

Bomb
The bomb got a little bit of love too this month, updating the graphics with those done by another artist, and also setting up a proper throw animation. I added a fuse and flashing effect too. I'll be adding the explosion fx a little later, right now i'm using a very placeholder sphere!

More Art
The artists over at Team 17 have been beavering away producing more and more art for the game. Including: 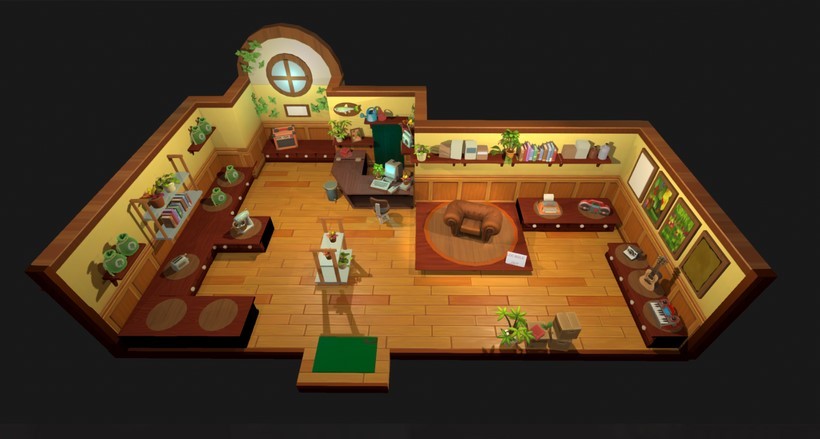 Updated graphics for the general store!

They also got started on the new character meshes, which I'm very much looking forward to sharing with you in the coming updates!

So there have it! Already we're part of the way into 2021, and more and more areas of the game are getting a lot of visual love. It's really coming along well!

I hope you're all keeping well, thankyou as always for your continued support!

Let me know your thoughts in the comments, and I'll speak to you all again soon!

Hokko Life
138
17
Turkish Language Support!
The first thing that came to my mind when I saw this game was to finally be able to play the PC version of Animal Crossing. For a better experience, please give us Turkish language support. I really want to play this game in my language.

Marchisio
Dec 27, 2020 @ 1:43pm
General Discussions
About time we saw some competition in the Animal Crossing space.
As a fan of Animal Crossing since the Gamecube, I'm both surprised and not surprised at the reaction to the Youtube trailer. I always expect other Nintendo fans to be petty vindictive children, but at the same time, Nintendo has basically been doing absol...
34

Xbob42
Jul 19, 2020 @ 10:25am
General Discussions
Dev talks about pronouns
"Can you choose your pronouns? Dialog currently in the game doesn't refer to the player using pronouns, and as such there's no need for this yet. If there were to be added dialog that needs personal pronouns, I would most likely use "they/them" to begin with as there's no extra work involved. A system for customizing your pronouns could be added in future though if it becomes important." Anyone else worried about this? I'm slowly starting to give up on this project....
31

Hermit
Oct 4, 2020 @ 10:10pm
General Discussions
Got Animal Crossing, it's pretty bad. Feedback for this game:
The graphics of AC are VERY poor. Low res etc, but of course that is due to the Switch being trash. However there is to much wait there, all tools break after 5 hits or so. And it takes to ♥♥♥♥♥♥♥♥ long to get something started. Hopefully it tools wont break every second here....
27