The cult-classic returns! Terrorize the people of 1950's Earth in the role of the evil alien Crypto-137. Harvest their DNA and bring down the US government in the faithful remake of the legendary alien invasion action adventure.
$29.99
Visit the Store Page
Most popular community and official content for the past week.  (?)
Hotfix v2512
Aug 5 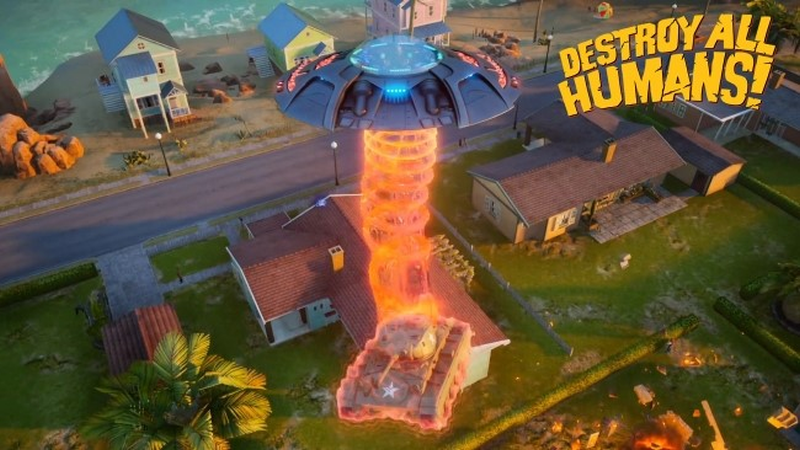 witness the glory of the Furon Empire - now mightier than before

Hotfix v2512
- Fixed a showstopper related to savegames at certain checkpoints
- Fixed rare crashes, and a few cases of edge-case “black screen” situations
- Fixed a few audio issues, added music to the Turnipseed Farm open world
- Fixed rare cases of holobob cancelling when holobob target despawns or is killed via an explosion. Now the ability will continue as it should even if the Holobob target is despawned; and explosions will no longer harm the holobobbed human
- Fixed some unlocking issues for skins
- Fixed an issue where “New Artwork” unlocked would show at missions ends even if there wasn’t a new Artwork unlock

Recommended
17.5 hrs on record
Destroy All Humans! Is a fantastic remake of an excellent power fantasy, that is somewhat held back by its remake status.
When I was a kid, I highly anticipated this game. I remember back in the day, I saw a Game Informer issue where this was the cover story, and I was instantly transfixed with the idea of being a little alien running around and blowing everything up. I was not disappointed when I finally got it, even if the game's crass humor got me in trouble with my parents for a bit. So I have a lot of nostalgia for the series. But how does the remake hold up?

The good news is that the gameplay here is totally revamped. Crypto feels more mobile and more powerful than ever before. You can skate around levels thanks to a new ability, allowing you to effortlessly dodge enemy projectiles. You can chain together several of your abilities now; In the original if you wanted to use your psychic abilities you needed to remain grounded, whereas here you can pick up a tank, fly through the air, and then shoot at a soldier while you throw the tank at another tank all at the same time. Your psychic energy meter is now totally gone, meaning you can use all of your abilities at will for however long you want. The power of all of your abilities is also greatly enhanced; The brain extraction power, for instance, was something you used rarely in the original, but is now a bread-and-butter tool in your arsenal for providing powerful crowd control utility. It can now be upgraded to spread on use, and victims under its influence will fight for you for a short time before their heads explode!

The weapons are also a lot more powerful. The Zap-O-Matic is never truly outclassed like it was before. The Anal Probe also remains a very useful utility through the end of a game, instead of being something you use exclusively for farming DNA for upgrades in between missions. The only minor problem I have with the arsenal is that the final upgrade for the Ion Detonator, which is your grenade launcher, isn't all that useful and actually harms the pace of the game. The time slowing mechanic cannot be cancelled as far as I can tell, and only serves to annoy. It's the last upgrade in the tree, so you can just skip it, but once it's installed it's installed for good.

The saucer combat sees fewer changes, but does have some nice updates. As before, your weaponry is vastly more powerful. The updates they make also means that you will be utilizing your entire arsenal frequently. You are actively encouraged to switch between weapons to maximize your destruction thanks to clever upgrades, meaning that you will deploy your Quantum Deconstructor frequently instead of just for special occasions.

In short, gameplay when you're fighting is what this game does best. It's a very video-gamey video-game. It's non-stop fun just going into sandbox and blowing away humans because the core gameplay loop in the combat is executed fantastically. There are a few control niggles, such as the auto-targeting sometimes not picking the thing you want, and the context-sensitive pop-ups sometimes misfiring meaning you might pop someone's head instead of implanting a command, failing the mission. But for the most part it works well.

Where the game doesn't hold up as well is the structure itself. The early 2000s stealth mechanics just aren't as fun in 2020. The actual missions and activities and collectables definitely feel 2000s as well, the product of an older school of game design. They hold up decently but it definitely holds the whole game back. The humor hasn't aged as well as I would have hoped, but it still gave me a few chuckles. The story itself is perfectly serviceable, leaning heavily into cheesy 50s b-movie territory which is totally fine.

So what do I want to see out of Destroy All Humans going forward? A lot of people want to see a remake of Destroy All Humans 2, but I actually disagree. The game is at its strongest when it's leaning into the stuff they could modernize, meaning the actual gameplay and combat mechanics, and how Crypto interacts with the world. The game is at its weakest when it comes to the overall dated structure. This structure also means the game is quite short, as I was able to 100% this game in just under 16 hours.

What I want them to do next is make a totally original game out of the IP. Take the fantastic foundation they laid for this game and disconnect it from the stuff that doesn't quite hold up in 2020. I think there's a lot of stuff that they can explore that they started to hint at in the side objectives you can do, such as neat Hitman-esque assassinations you can do in one mission, but they couldn't really flesh out fully due to the constraints of the story they had to adhere to. I think a fully modernized Destroy All Humans experience would do much better than another remake.

Recommended
4.4 hrs on record
Great remake. Probably the only one I can think of where I was actually excited to play it again. I hope they do Stubs The Zombie as well.

Recommended
8.6 hrs on record
I used to love playing the Destroy All Humans games after I got home from school back when I was still a kid. Essentially it's just the original game with better graphics, improved UI design and a tiny bit of bonus content sprinkled in here and there. Overall it's a great trip down memory lane and I fairly enjoyed my time playing this remaster. The only unfortunate thing that I sadly have to mention is that it only took me 8.6 hours to fully complete the entire campaign, complete all the optional bonus objectives, get 3 stars on all the side missions and collect probes. While it is a good game it's quite a short game which kinda leaves me feeling a bit disappointed. I believe we all sucked a little more at games back when we were kids so it's no wonder that we beat games faster as adults, but as a kid I went over 40 hours just playing around while trying to beat the game's campaign. Overall it's a great game, what I adore the most about this game is its strong cast of funny characters and simplistic look. My rating for Destroy All Humans is 9/10, I loved the game back then and I still love it :)

JetMidStedt
View screenshots
The Invasion has begun: Destroy All Humans! today, it's out now!
Jul 28 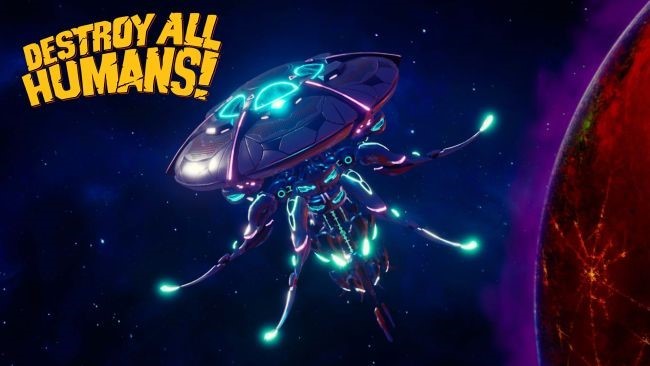 Vienna/Austria, Offenburg/Germany, July 28th, 2020: Puny Humans, rejoice! The day has finally arrived, Destroy All Humans! is now available on Steam. This device will allow you to witness the glory of the Furon Empire in your living room, no need to bring your resistance to the outside world!

The skin pack is also available for purchase:
https://store.steampowered.com/app/1254570/Destroy_All_Humans_Skin_Pack/

Crypto's Weapons Detailed
In his new video series, Cryptosporidium-137 is delighted to show off his fine arsenal for the extermination of mankind. Starting with the "Disintegration Ray", you will find a new weapon showcased every week on THQ Nordic's YouTube-Channel: https://www.youtube.com/playlist?list=PLY7YOSaI0JAOonXY3YCD-bggNwMxh-aFV

Welcome to ...
Crypto's adventures leading him to some interesting fictional places in the United States of the flaming 50s. In the new "welcome to" series, THQ Nordic will present the famous locations one by one, from the Turnipseed Farm and Santa Modesta to Area 42 and Capitol City. All "welcome to" videos are available on THQ Nordic's YouTube-Channel: https://www.youtube.com/playlist?list=PLY7YOSaI0JAPHV1iW_7n4NsC7kXEbzPhC

Free Demo Available
We know, most of you humanoids can't wait to witness the glory of the Furon Empire, so here’s your chance to play the Destroy All Humans! Demo for PC today, you can download it via Steam:

Probe Locations
Locations for probes with both text and pictures. Spoilers ahead. In the pictures taken, my 'crosshairs' will usually be pointed toward a probe unless Crypto is standing relatively close to it.
112 ratings

Splat
View all guides
The Lost Mission: A Teaser for Destroy All Humans! New Level
Jul 21 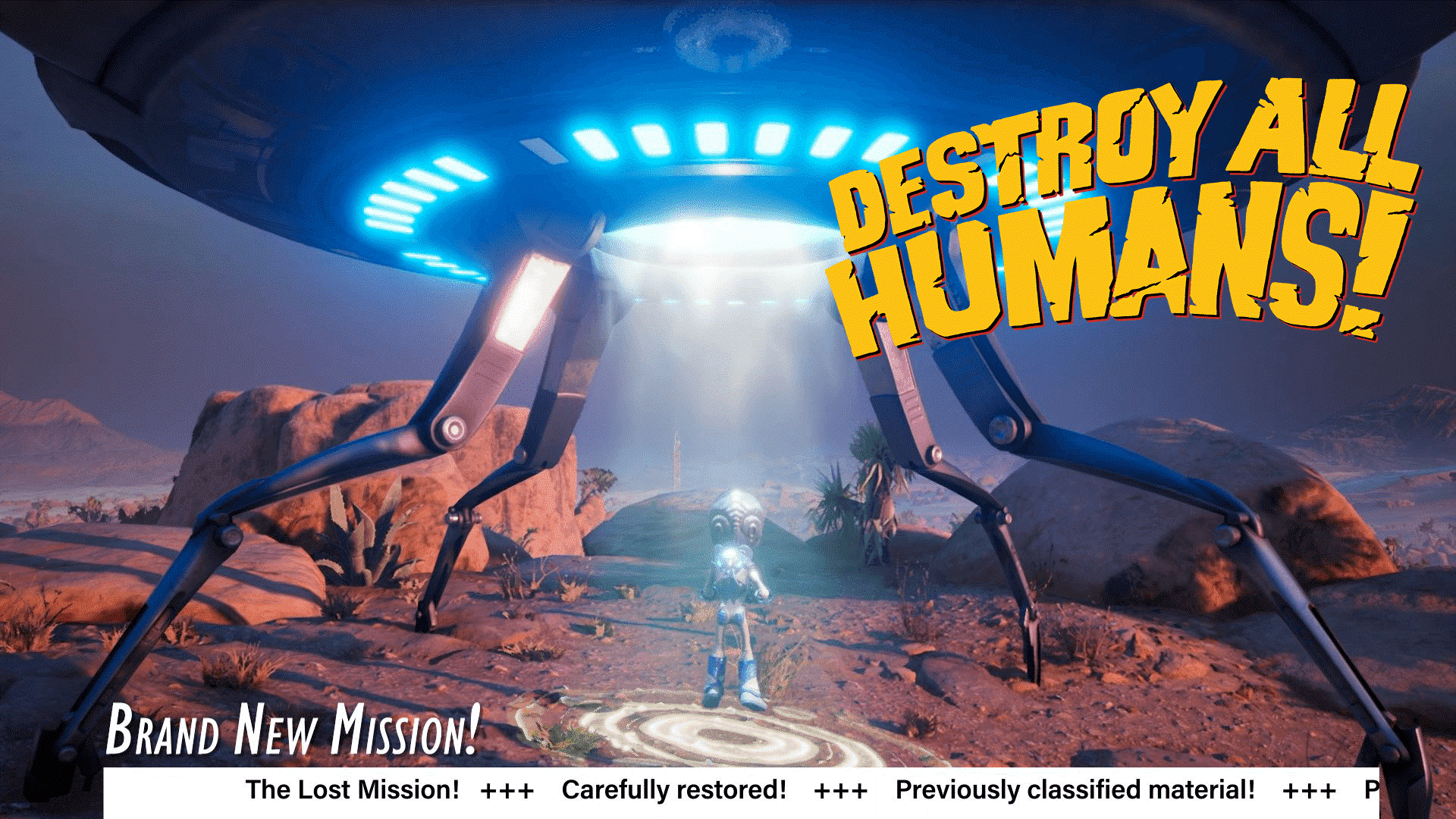 Vienna/Austria, Offenburg/Germany, July 21st, 2020: Destroy All Humans! is a remake of the beloved 2005 video game classic. Developer Black Forest Games has massively upgraded the graphics, with the game being created completely in Unreal Engine 4. Among new visuals, also the controls have been modernized and some interesting new content was added, special challenges after a mission of the campaign is completed for example.

BUT ... there is one lost mission. The dev team found - hidden deep in the archives of Pandemic Studios - an unreleased mission in the middle of the campaign. This mission has been restored and finalized and will be part of Destroy All Humans! coming on July 28th.

Watch the teaser for the lost mission: https://youtu.be/LhxPFL0ebnE

Crypto's Weapons Detailed
In his new video series, Cryptosporidium-137 is delighted to show off his fine arsenal for the extermination of mankind. Starting with the "Disintegration Ray", you will find a new weapon showcased every week on THQ Nordic's YouTube-Channel: https://www.youtube.com/playlist?list=PLY7YOSaI0JAOonXY3YCD-bggNwMxh-aFV

Welcome to ...
Crypto's adventures leading him to some interesting fictional places in the United States of the flaming 50s. In the new "welcome to" series, THQ Nordic will present the famous locations one by one, from the Turnipseed Farm and Santa Modesta to Area 42 and Capitol City. All "welcome to" videos are available on THQ Nordic's YouTube-Channel: https://www.youtube.com/playlist?list=PLY7YOSaI0JAPHV1iW_7n4NsC7kXEbzPhC

Free Demo Available
We know, most of you humanoids can't wait to witness the glory of the Furon Empire, so here’s your chance to play the Destroy All Humans! Demo for PC today, you can download it via the Steam product page: 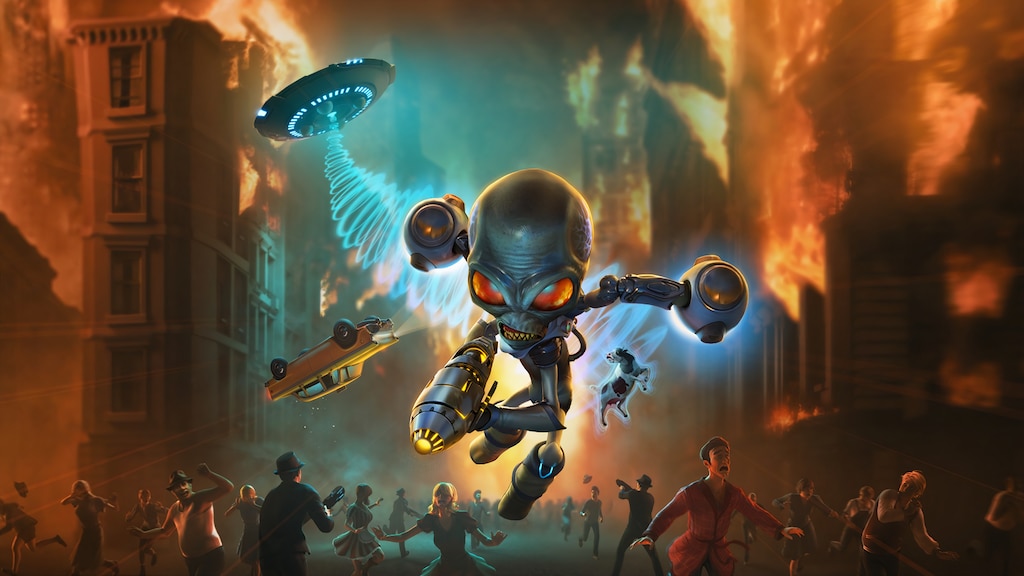 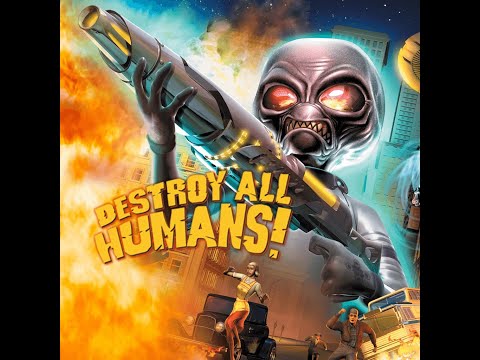 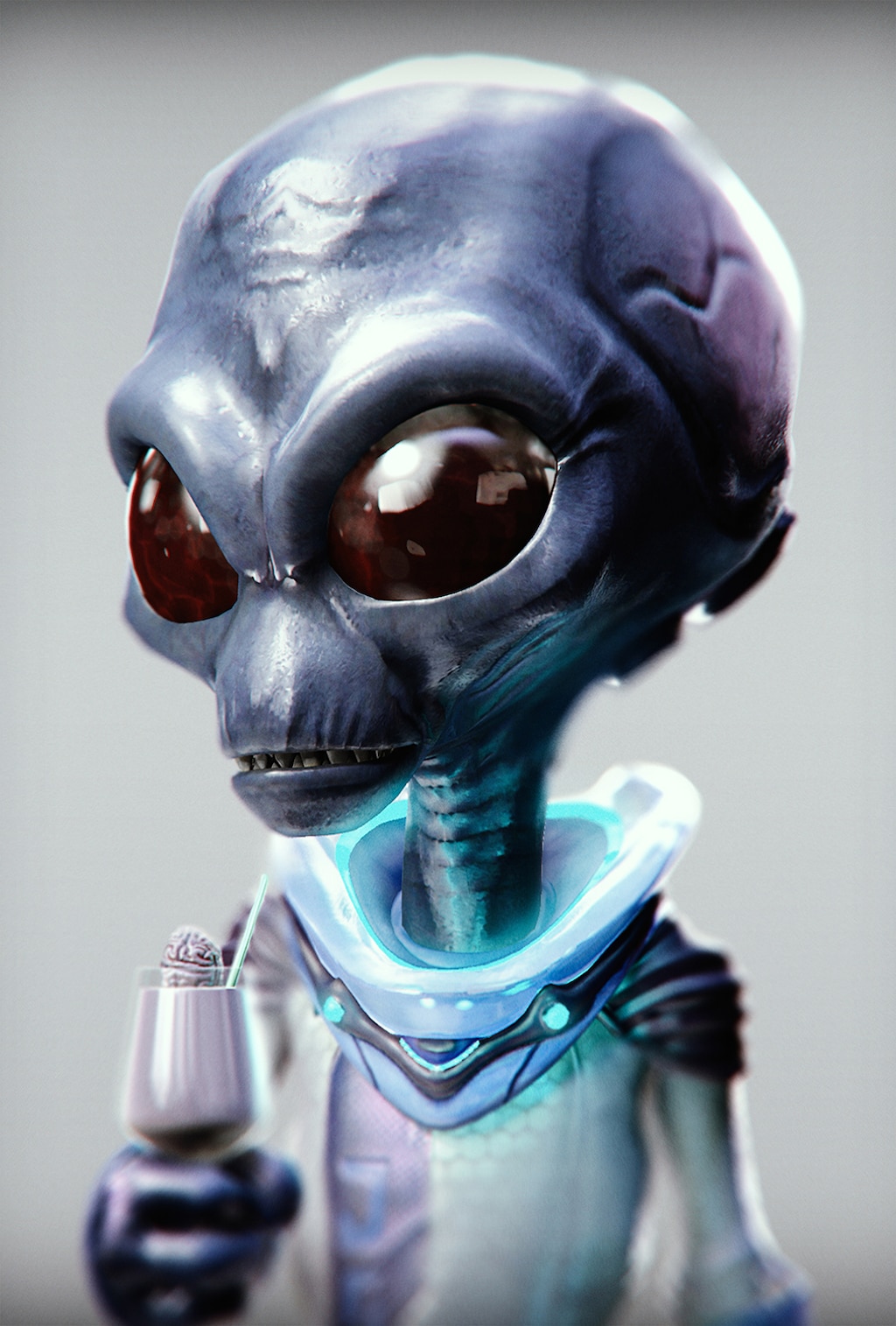 Play anything at the drive-in
Swap out the MP4 for your own, and play anything on the projector during 'Teenage Zombies From Outer Space'.
30 ratings 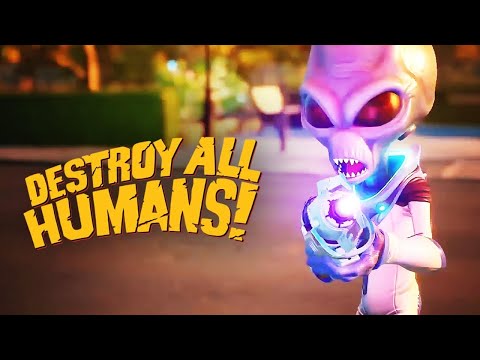 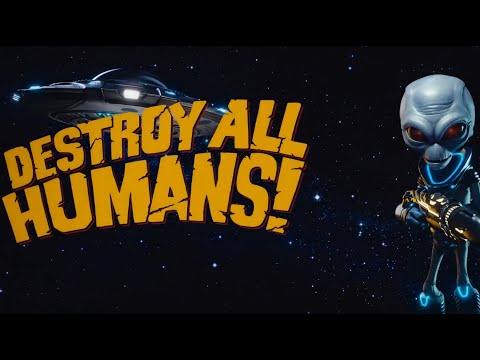 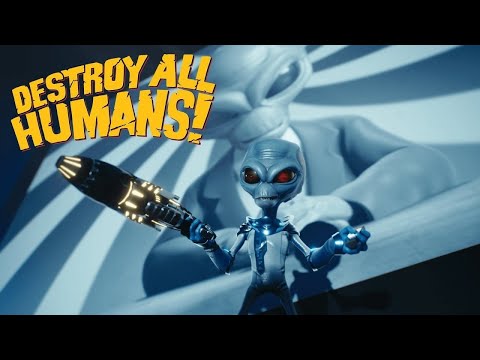 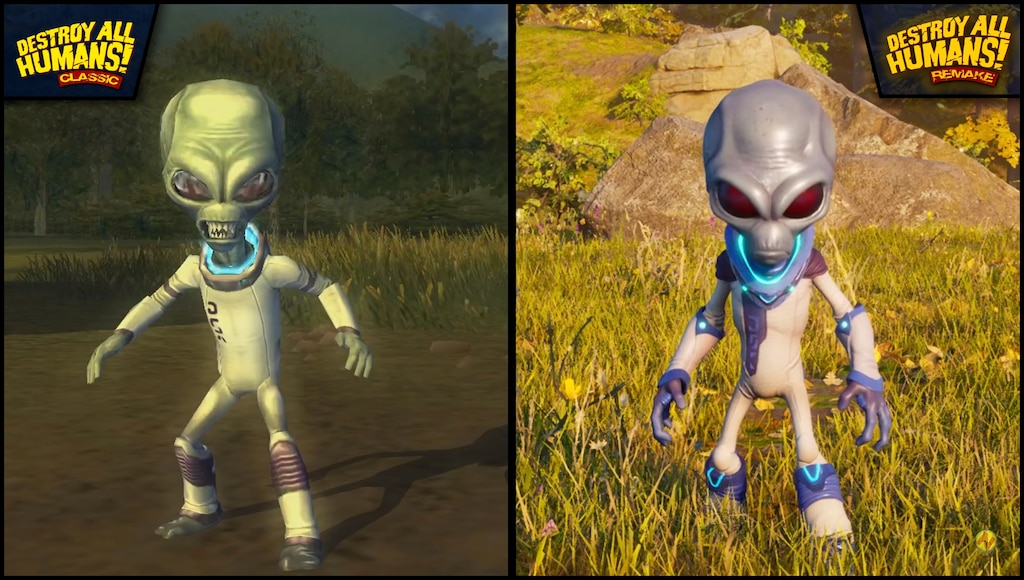 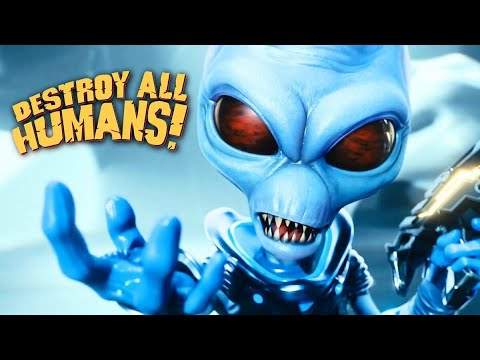 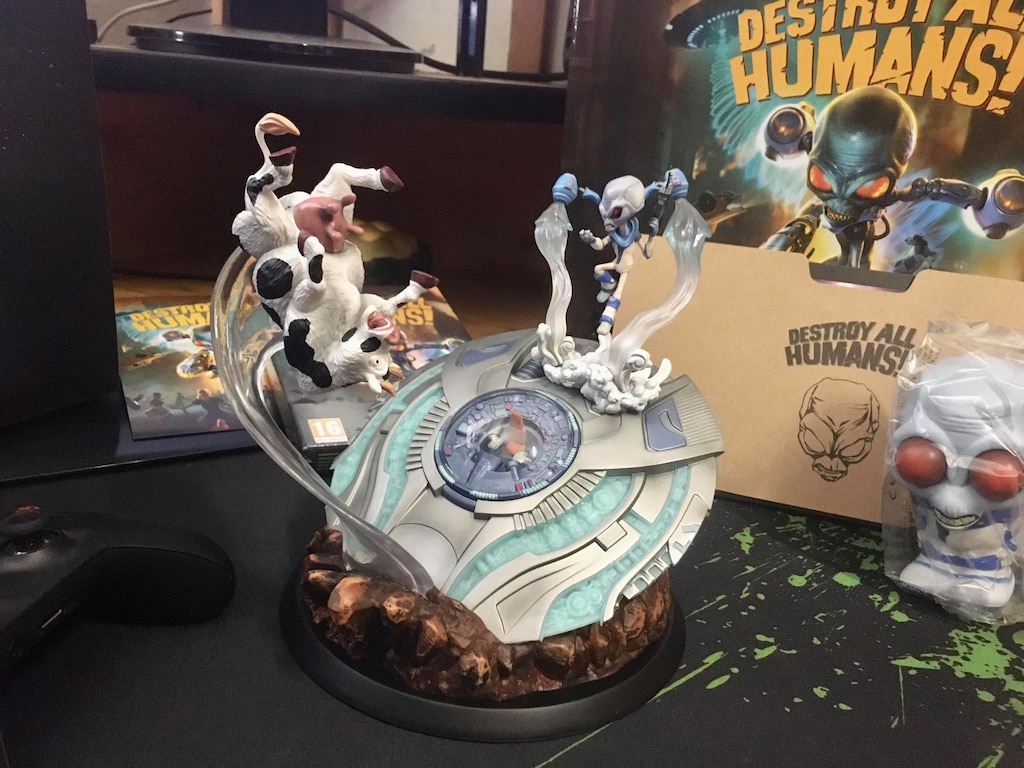 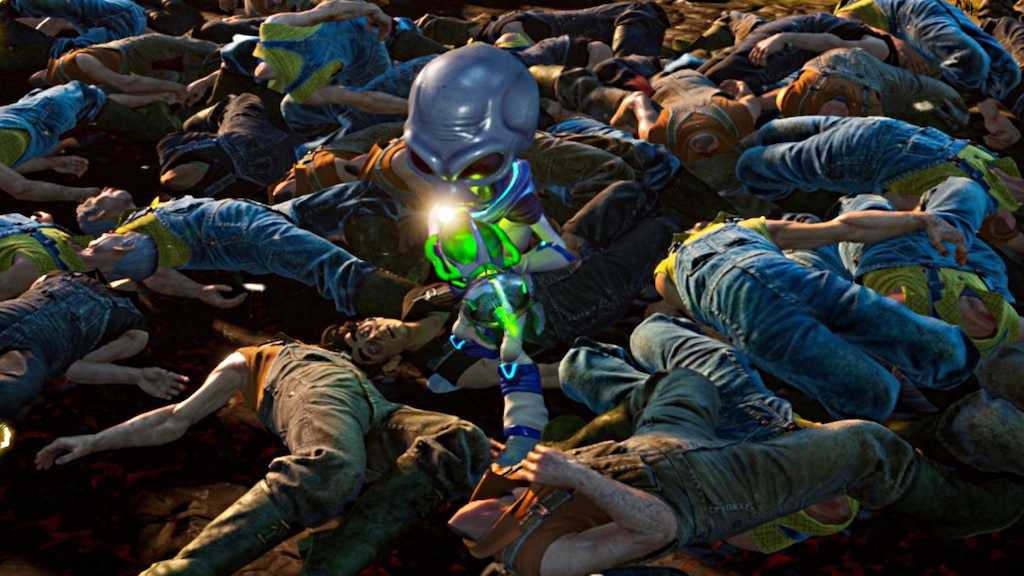