Manage a Dwarven mining colony in the unexplored mountains of Mara. As conflict rages in the Overworld, you will need to craft, explore and fight as you provide the allies of your choice with the finest weapons and gear to assist them in the battle for glory.
-33%
$24.99
$16.74
Visit the Store Page
Most popular community and official content for the past week.  (?)
Quality of Life 3 Update - Version 1.1.20.0
Dec 22, 2021
We're back once again with another gem of an update! This time around we've made a huge number of quality of life changes that are sure to put the ale back in your tavern.

Take a look at the patch notes below:

As always, thanks for your continued support and we'll see you down the mines soon!

Hammerting
377
25
Dwarves not using hand carts on railway
I have a railway with a rail station at each end. There is a hand car and a cart on the railway. But the dwarves use neither and just run along the tracks to the other end and back. Any ideas what might be wrong? https://steamcommunity.com/sharedfiles/filedetails/?id=2728441408...
2

grrantu
3 hours ago
General Discussions
Unmanaged professions
I dont really get the tooltip description, cannot figure out what it wants and how to manage the professions..
5

Not Recommended
40.5 hrs on record
These dwarves make Disney's lemmings look smart. I've hit a wall twice now where the Dwarves dig stupid deep, and one cavern has enemies that wipe them out. What happens is the rest of the colony then goes down there to go grab the best equipment from their fallen comrades, or they go try to heal everyone - in the middle of where they fell surrounded by super strong enemies.

This happens in end game, regardless of difficulty. I've had it happen twice now, once on normal and once on the easiest difficulty setting in the game. I can not keep the dwarves out of the war zone. I've got everything unlocked, and have them wearing mithril and platinum armor. What happens is I continually hire new dwarves, they drop into the meat grinder for gear, and there's not a damn thing I can do about it. This repeats until either all the enemies are dead (They respawn quickly enough), or I run out of gold. I can't micromanage fast enough to work around it, and the rest of my colony falls to dust after waves of attacks.

BluefootFox
86 products in account
0
How is item rarity affected? How to improve?
Hi, Hello everyone, does anyone know that there is an increase in the career failure rate in the game, what does this value affect? Does it affect the rarity of crafted items? There seems to be no detailed explanation yet? What attributes in the game affect the rarity of crafted items, especially weapons, accessories and other items, looking forward to a reply from the big guy! !...
6

A casual guide in english
I could not see any guides in english when I tried to look for information on the game, so I thought I'd make one and share what I learned so far.
31 ratings 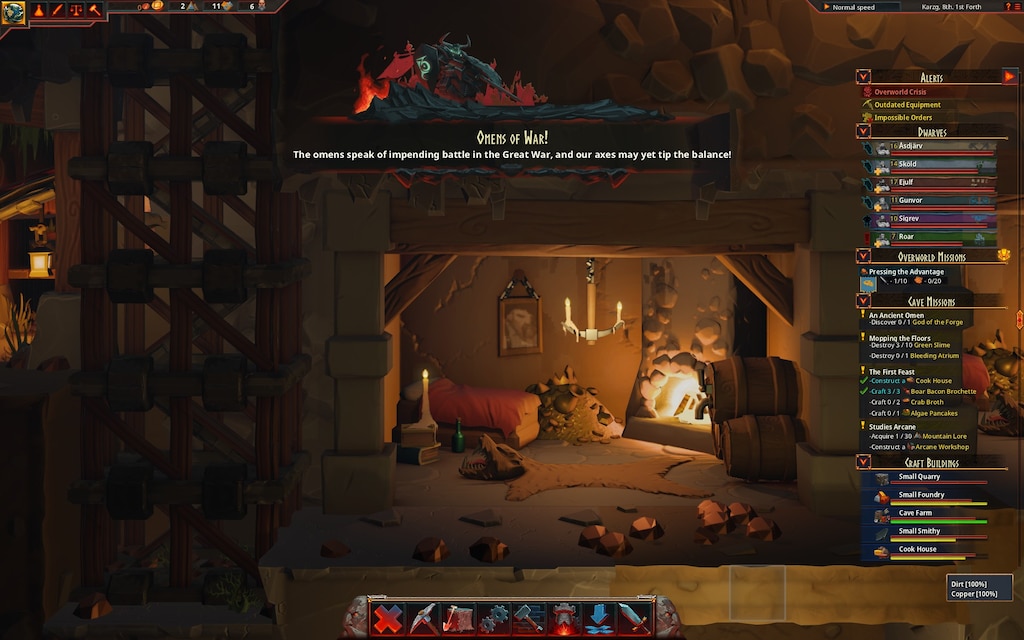 0
5
Every Dwarf needs his own room with a small hoard. 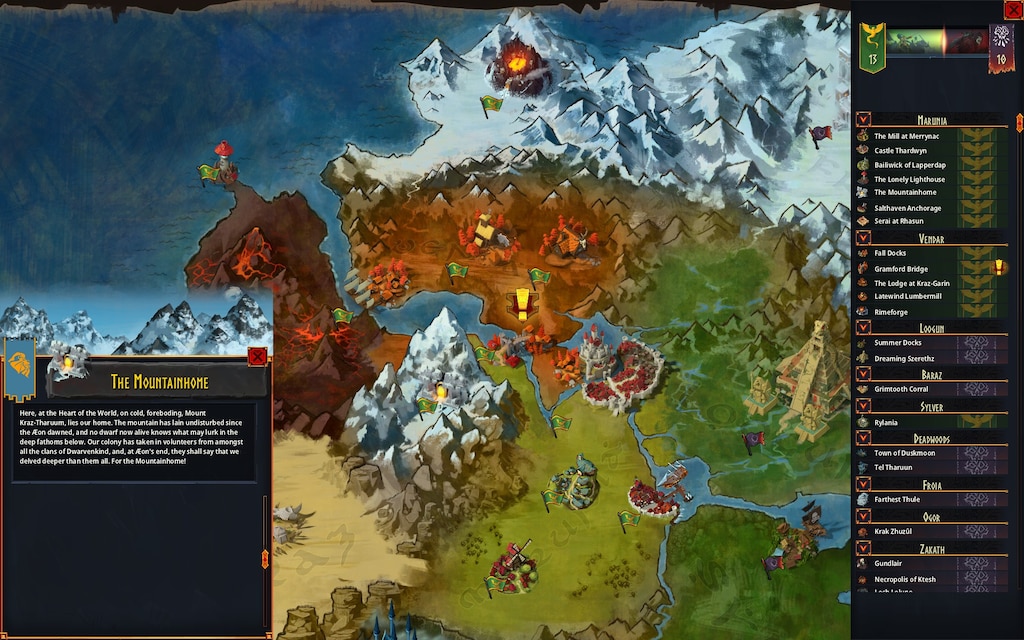 0
4
There are missions here, and a war going on. 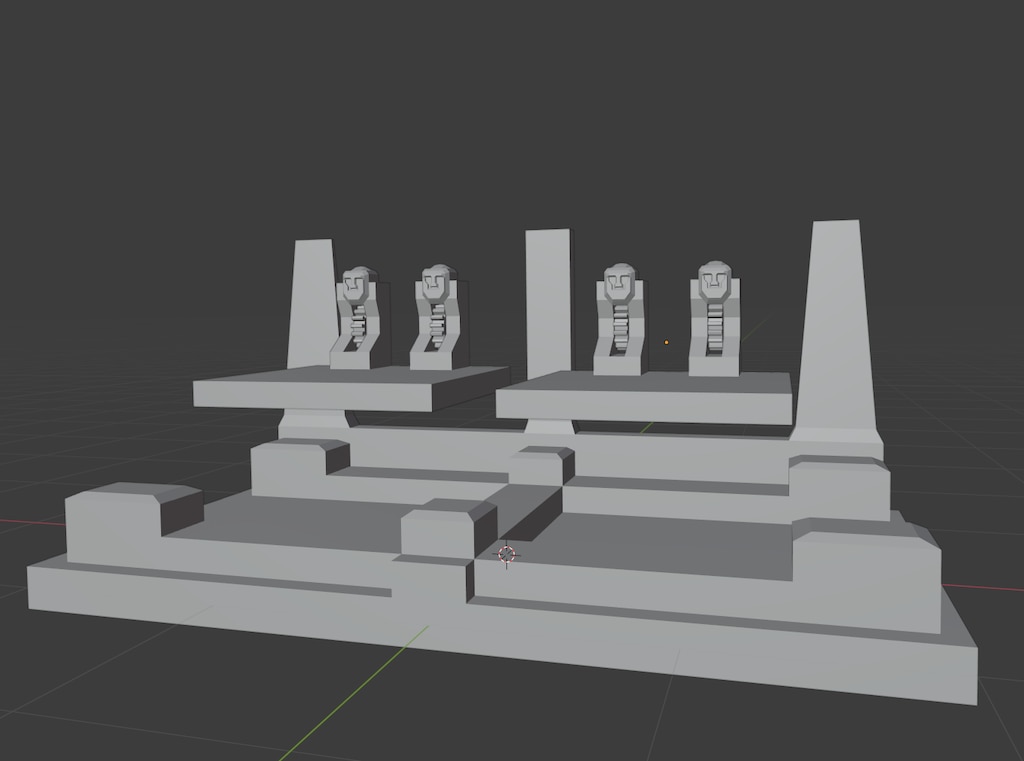 Crafting - What to do
A short guide that will teach you, how to make the best tools and weapons in the game

Recommended
20.7 hrs on record
Pretty good, might be great someday if they keep updating and adding things into the game.
Prettier than craft the world, lighter on features, then again craft the world has had many more years to get free updated and DLC. Crossing my fingers we'll get to see the same thing here.

If you are on the fence, perhaps check some youtube letsplays.

Multiplayer coop makes you share the same colony / dwarves which might not be best for two experienced players but is great for introducing new people to the genre, like your SO, kids etc =)

Also just as a random note: There are quite a few negative reviews with 100-400h. This is my personal opinion, but if you get 400h of entertaiment from 24,99€ game before getting bored/frustrated/whatever, it should be considered as a positive review ;) 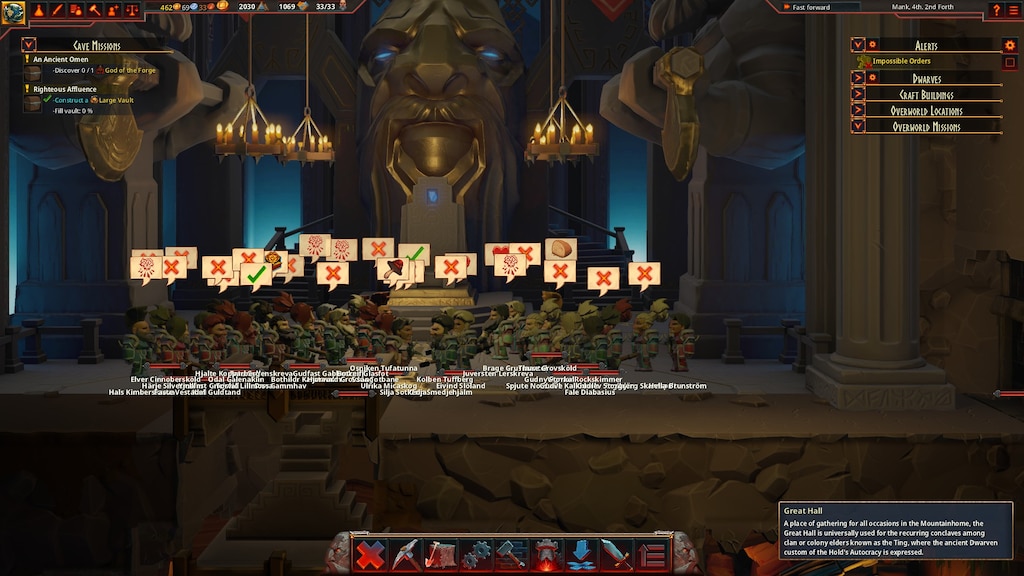 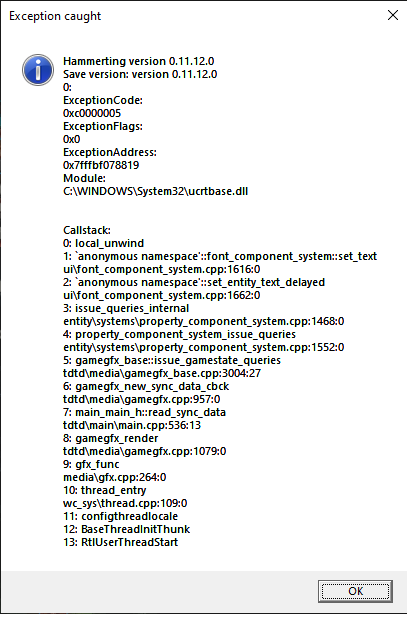 0
3
My favourite part of the game

Not Recommended
29.4 hrs on record
There's a lot to be desired about this game, unfortunately how the AI conducts itself, especially in the later part of the game becomes more of a nuisance than a help. The hauling system is not intuitive and the cart system is questionable at best. Unfortunately, there isn't much in the realm of help when it comes to looking up information in the help menu. There was a lot of fore thought put into helping explain the beginning part of the game and helping "new" players to transverse the mountain home. The Overworld is lack luster and the end game goal for making "friends" doesn't seem to work, or maybe I'm just a little slow when it comes to that. I was glad to see that the put in an automatic sell button for items, but the same thing would be extended for automatically buying. I don't want to have to keep going to the overworld to buy eggs, hides, or lichen every 5 minutes. I would be nice to see a feature added where I can just say to automatically buy these items when they come up for sale. Would I recommend this game right now, no. Unfortunately, it still seems within the beta "final" release stage. Has the game come a long ways of when I first played it about a year ago, absolutely. I'll probably revisit this game in about 6 months to see if there are any major improvements to the dwarfs AI, clarity around the mid and end game features (rails, crafting, metal), and improvements to the Overworld 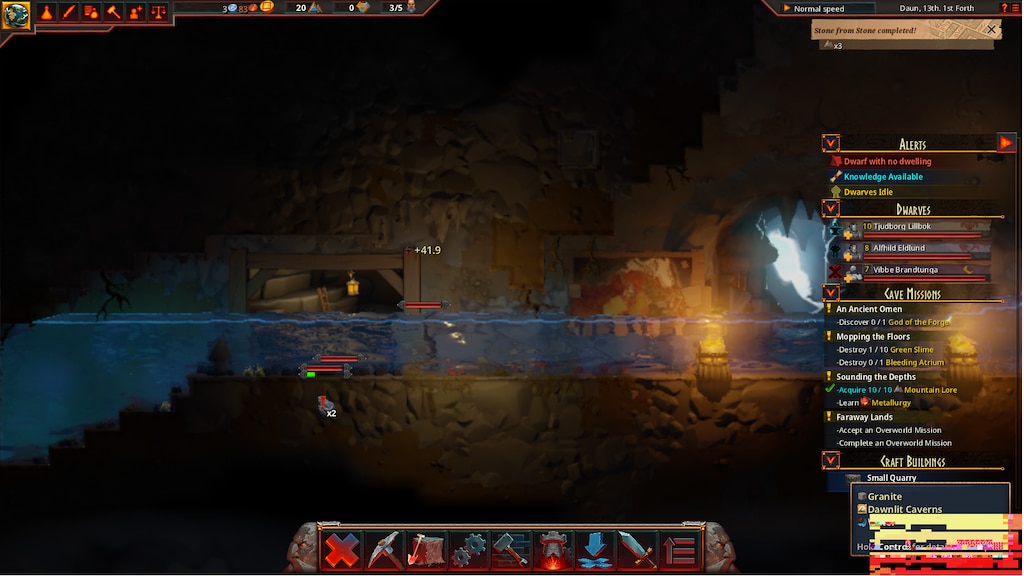 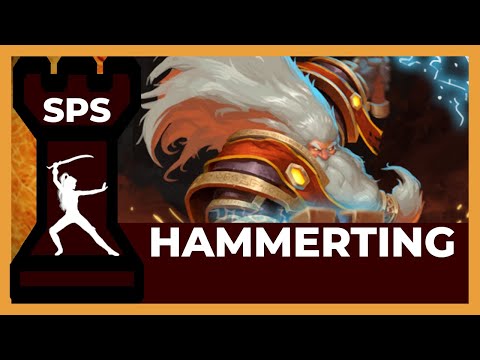 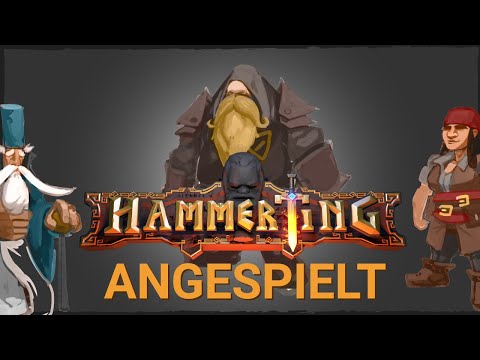 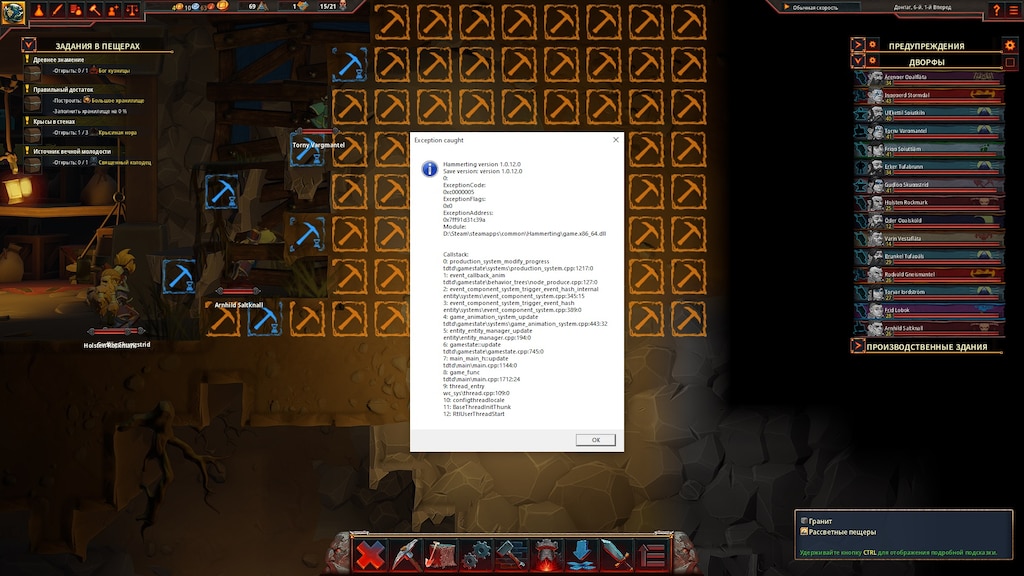 0
0
Game crash during building a tavern 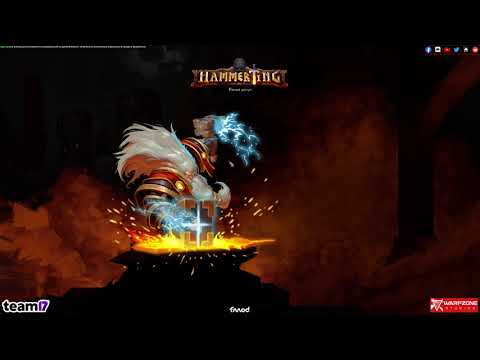 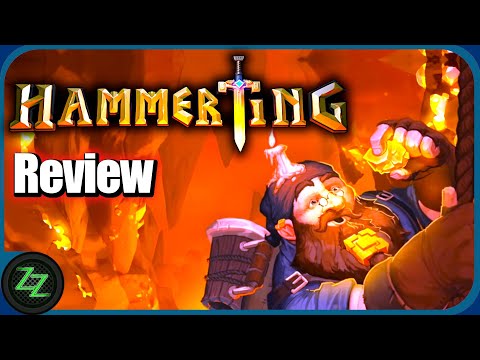 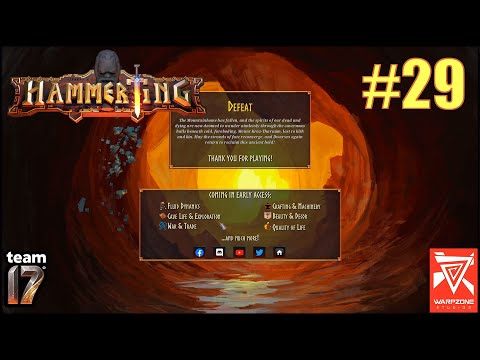 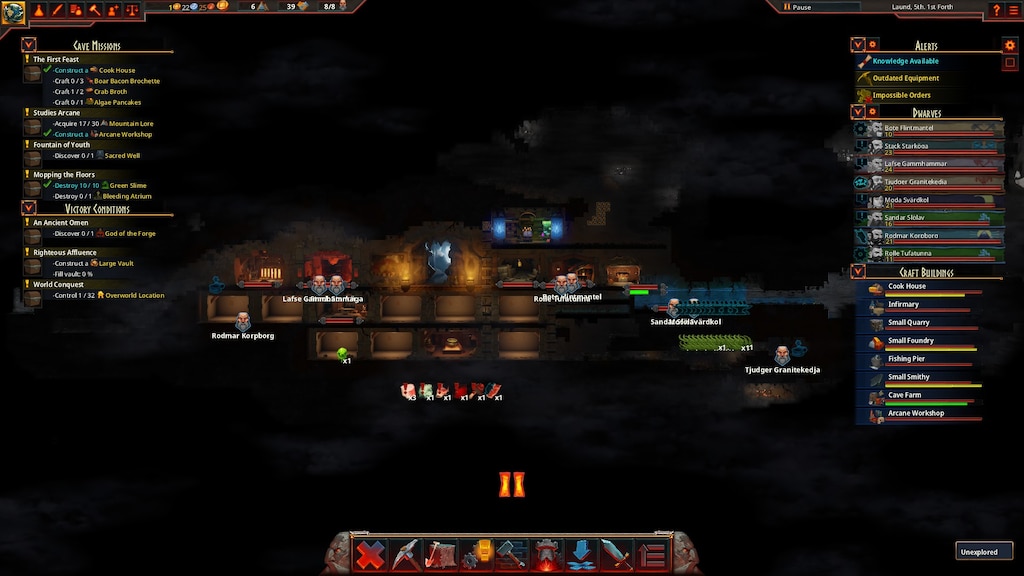 0
0
As always, micromanaging and constantly switching between pause and normal speed, but things are pretty well organized here.

Aydaylin
View screenshots
Mining vs Excavating
Hi, Sorry, I'm sure this must sound like a dumb question, I get that Excavating is the art of digging out your cave, both foreground and background tiles. Mining seems to be the act of a job, like the stonemason, but there's already a job called Stonemason, so it's not that. What exactly is this Mining job please? Thanks!...
21

Storm
Jan 21 @ 1:22am
General Discussions
Store Citadel Mushroom Spores not being stored
Hi, In the kitchen, I have a job for "Store Citadel Mushroom Spores", but it's not actually storing them, they're just lying out in the fields. Any ideas please? Also, any idea how to "clean up" the farm? It's just overfilled with harvested stuff like CItadel Wood and Spores. Thanks!...
16

Storm
8 hours ago
General Discussions
The Dwarves & Lords Bundle
Nov 25, 2021
We’ve teamed up with the wonderfully charming Lords & Villeins to bring you the Dwarves and Lords bundle, where you can get both games for a whopping 32% off!

As you may have noticed from the title, Hammerting is a whopping 33% off as part of the Steam Autumn Sale, So If you’ve ever wanted to fulfil your wildest mountain dwelling, beard owning fantasies, there’s never been a better time to do it!

Get yourself over to the Store page if you're interested: https://store.steampowered.com/app/760650/Hammerting/ 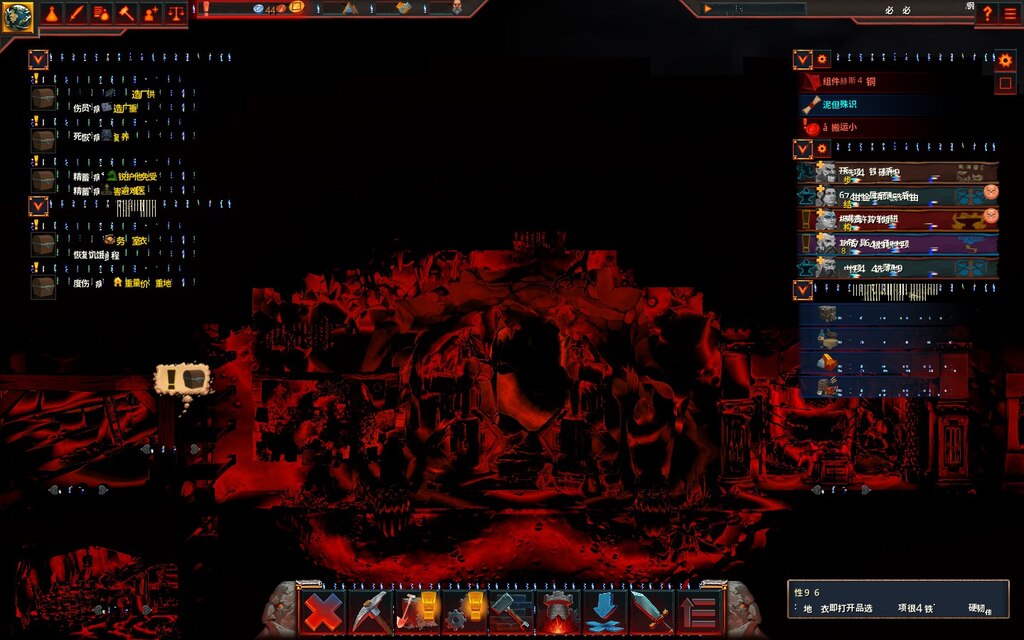