As you may have noticed we have over the past few days been doing some adjustments to the ATC system of Airport CEO, specifically targeting a few undesired behaviors featured mostly within very large airports. Today we're releasing the (most likely) final update in that series which takes care of some final stabilization in relation to these new updates, specifically...

While these balance issues primarily, as mentioned, with very large airports - ultimately airports of all sizes benefit from these improvements.

Thank you for playing and see you around the community!

Happy Halloween! We're back with a super small update as a result of the flight planner double booking fix part of the recent -42 update. The automated flight booking system is one of the most complex and involved systems in the ACEO code base and this particular change caused some performance degradation that we are now sorting out. We'll most likely be back with another stability update in the near future, but until then here's today's patch notes:

It's happening! We're back with another update, this time Airport CEO 1.0-42, that not only fixes a fringe case with double booked flights on very large airports, but also brings no less than four new aircraft! Taking flight in this update is the Airbus A220-100 and A220-300, flying for Maple and Air Strada, as well as the Pilatus PC-12 and PC-24 which are both GA aircraft! These are part of the base game so no DLC needed to enjoy them. Please refer below to the full list of changes for this update...

That's all for now, thank you for playing and we'll continue to keep tabs in between developer of Project Venus. We'd also like to thank forum user andyc for the lovely Airbus A220 mod featured in this post's cover image. Fly safe!

Update 2:21 PM CET 21/10/2022
A fix for the stalling bug report form was mistakenly not included in this update, we have since now hot fixed the current version with that fix!

Salutations from Gamescom 2022! Today we're bringing you an extremely small stability update as a threading issues has started showing its ugly face on the Windows version of the game, causing the game to not always correctly executing a quit to menu without crashing. This issue has now been mitigated as per the patch notes below...

We hope you've had a good summer and are looking forward to supply additional updates over the coming months!

It's been a while since we last corresponded but today we're breaking the silence with a small quality of life update: Airport CEO 1.0-39! As you will see per the below patch notes, this update mainly solves a few extremely rare issues that have come across our backlog per your bug reports over the last half year. Since Airport CEO is, as of over a year ago, fully out of early access we're not working on any additional major features but there are still a few lingering aircraft models that are being prepared for their maiden V1 and rotate. And while they're not deployed with this update; you can rest assure that we have not forgotten them!

Here's what's changing with this update...

While it's currently quite quiet over at Apog Labs, we're still burning the midnight oil. After feeling a bit of an early access communications burnout, communiqués from us has had a bit of a break as we've put our heads down and focused on the development of a new thing. But we'll be taking a break from that break later this summer via a studio update on the Apog Labs website[www.apoglabs.com], detailing some of the things we've occupied ourselves with during the first half of this year.

We hope you're doing well and that you're staying safe. Today, Airport CEO celebrates one year since the 1.0 release and because of that we'll be running Airport CEO and all DLCs at 50% off throughout the weekend starting 19:00 CET! We're also launching Airport CEO 1.0-37 which is a super small update that mainly fixes a rare occurrence of certain aircraft in certain instances requesting the wrong type of fuel. Here's the change log for this update...

We are currently mainly focusing on Project Venus, the working title of and the next Apog Labs project but there are still a few aircraft left to be implemented in Airport CEO; we have not forgotten about those! However, since we are for the moment mainly occupied with the future of the studio these are put on very low priority but will hopefully make it into the game sometime before the start of the summer.

Thanks for reading and stay safe! 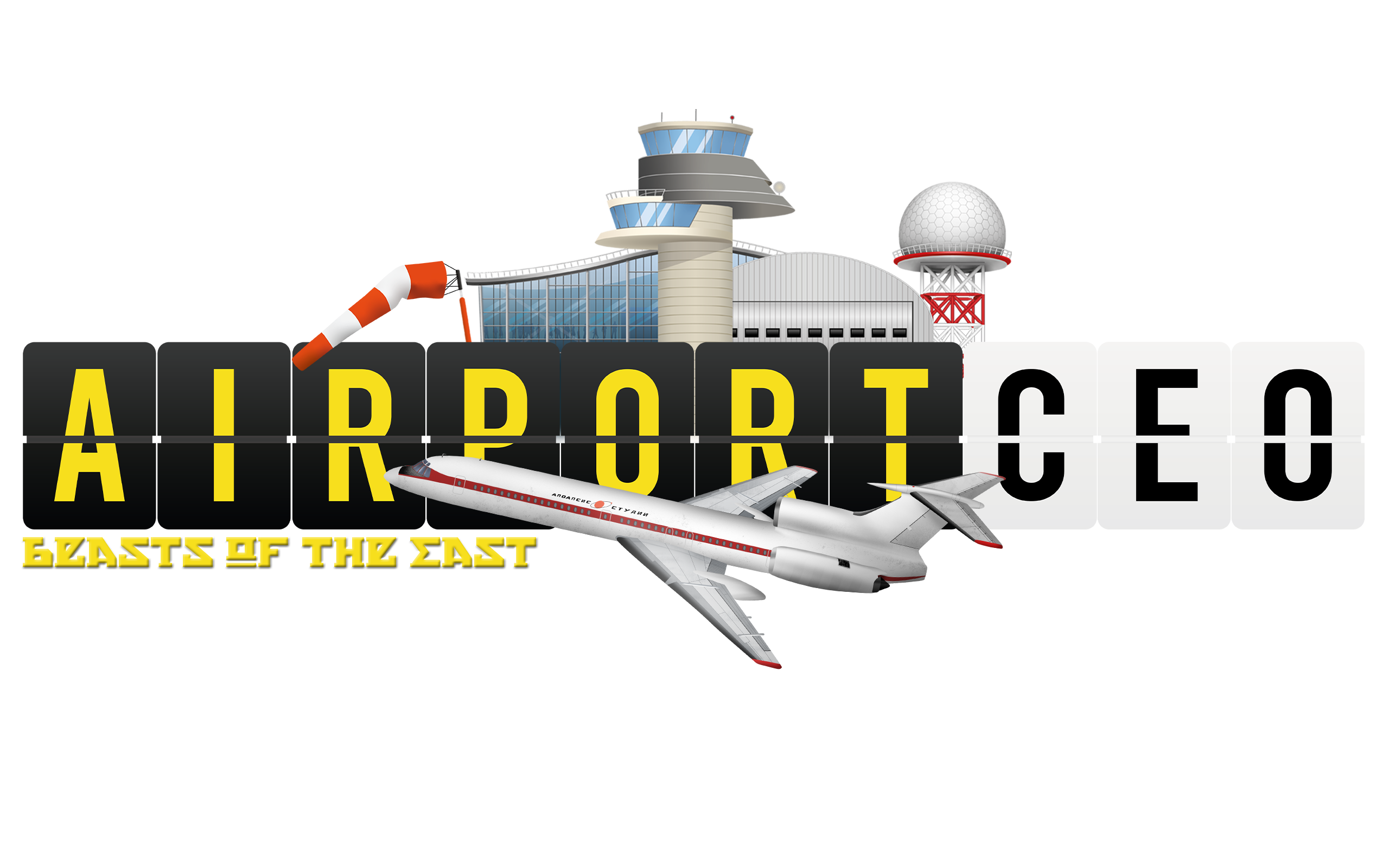 Unique engine placements, see through nose cones and raw power! Those are just a few of the components that summarize the eastern aircraft, birds rarely seen flying in the west yet special enough to leave a mark in the aviation history. Including the Tupolev Tu-114, the world’s fastest and most powerful commercial prop aircraft, the Airport CEO Beast of the East DLC contains a total of four different aircraft models significant to the eastern aviation history.

Downloading this DLC will add the eastern aircraft to the new eastern airlines Yuri Air and Сибирские авиалинии (Siberian Airways).

This aircraft pack DLC marks the final release of the planned aircraft packs as of the 1.0 launch. Airport CEO has since its launch always contained loads of western aircraft and we're today happy to include at least a few eastern types, completing the representation of the aircraft and aviation history in ACEO.

Read all about the Airport CEO: Beasts of the East DLC here!

Happy new year and welcome to Airport CEO in the 2020s! We're kicking off this year with the release of Airport CEO 1.0-36, bringing about another batch of fixes and balances as well as a new GA aircraft, the Learjet 75, and also the final aircraft pack DLC as planned since the 1.0 release: Airport CEO: Beasts of the East!

Permanent solution for MacBook Pro M users
With the recent rapid release of Apple's new MacBooks containing M chips, both regular and pro, we've for the past months had a few issues with font rendering on those machines. That problem is with this update now finally permanently fixed and any new Apple M variants will run Airport CEO without any future font rendering issues.

Thanks for joining us in 2022 and we hope you'll have yet another flourishing CEO career year! See you soon.

We hope you had a good weekend. Last week we had another Steam sale event which means loads of new airport CEOs starting their career. As a result of this we've made sure to watch the backlog carefully during this past week and that's why we're back today yet again with another small stabilization update.

MacBook M1 Pro chip support
This update includes support for the latest MacBooks running the M1 Pro chip and will ensure that the game runs normally, however not natively, as Rosetta is still required for the game to launch.

That's all for now, enjoy your days at the office and see you later - fly safe!

It's been a few weeks since we last spoke and a lot has happened since but we're back once again with another minor quality-of-life update of Airport CEO! This time it's time for 1.0-30 which again primarily addresses a few fringe case bugs along with some other very minor improvements but most importantly it addresses the bugged bug reporting system and brings that back to full functionality. But first...

We're now Apog Labs
As of October 15th 2021, our company’s legal entity name has changed to Apoapsis Game Laboratories AB but we will be known as Apog Labs. Other than this change, nothing will change in regards to how we develop, maintain and support our past and future products.

You can read more about the name change here[www.apoglabs.com].

Bug
[/b]: "The collector" achievement considers aircraft that are not in a non-modded airline fleet
[/list]

As you can see, there's not only been changes made to the game but also to the bugs themselves. They are now labeled as "MERCURY" instead of "ACEO" as we've named our games in the order of planets in our solar system. We'll see how many we get to.

Anyway, that's it for now. We're currently focusing mostly on the development of the next Apog Labs game but there are some minor things cooking for Airport CEO as well! But until then, have a spooky Halloween and...

Update 10/29/2021
We have received reports about the newest MacBook Pro with the M1X (pro) chips not parsing text in Airport CEO correctly. This bug has been fixed on the experimental branch of Airport CEO and will be available as part of a default release later this coming week.