El Presidente is back! Prove yourself once again as a feared dictator or peace-loving statesman on the island state of Tropico and shape the fate of your very own banana republic through four distinctive eras.
$49.99
Visit the Store Page
Most popular community and official content for the past week.  (?)
Tropico 6 Hotfix #3 for 'Guerra de Guerillas' Update released!
Aug 12
Fellow Tropicans!
We have just released a new hotfix for the latest update ‘Guerra de Guerillas’ (v.10) - thanks to your
feedback and support!

Tropico 6
112
5
Tropico 6 No Longer Working on my Mac
Hi, I recently tried to continue playing the game on my mac after a long hiatus, but now all of a sudden I'm getting stuck on endless loading screens right after the main menu. When I originally bought the game last September, it worked perfectly fine on my mac, enough for me to play through 3 of the missions without any problems. Why would my computer suddenly not be sufficient to run the same game? Here are my specs: Computer Information: Manufacturer: Apple Model: MacBookAir7,2 Form Fact...
3 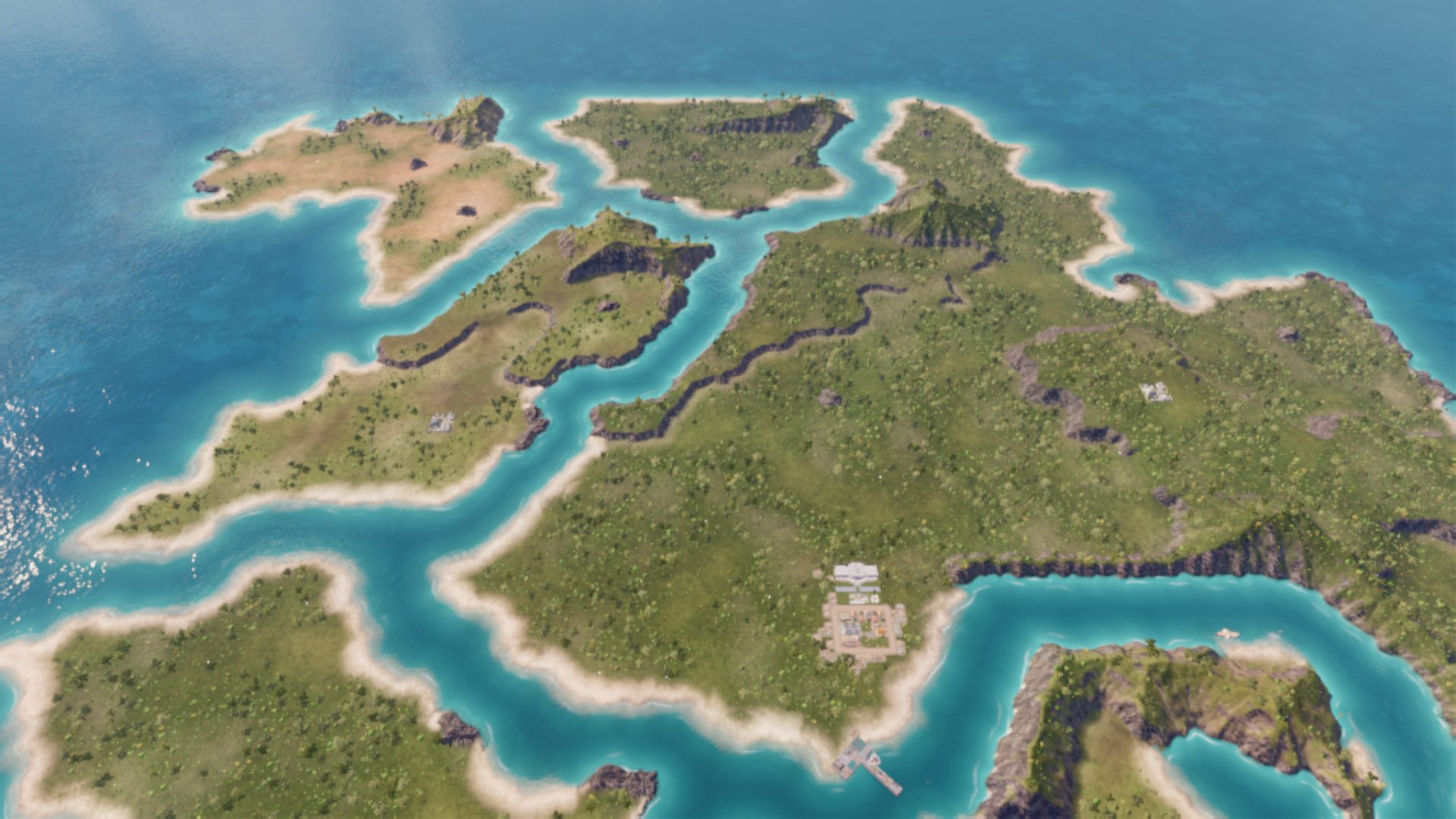 Nerzghul
View Steam Workshop items
Sea Power Grid
Is there going to be addition to sea power grid. Or allowing for turbines to be put in the sea?
1 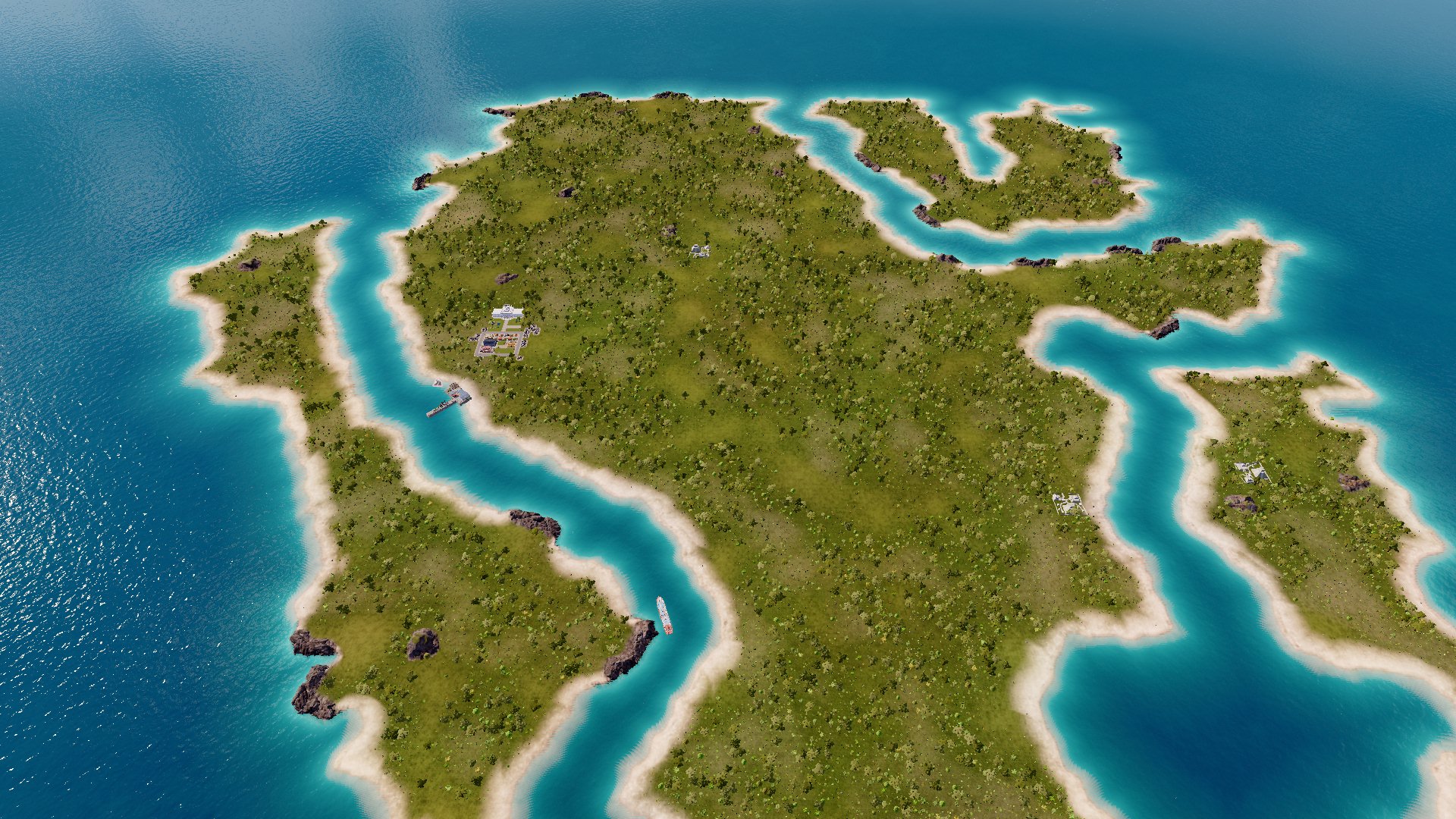 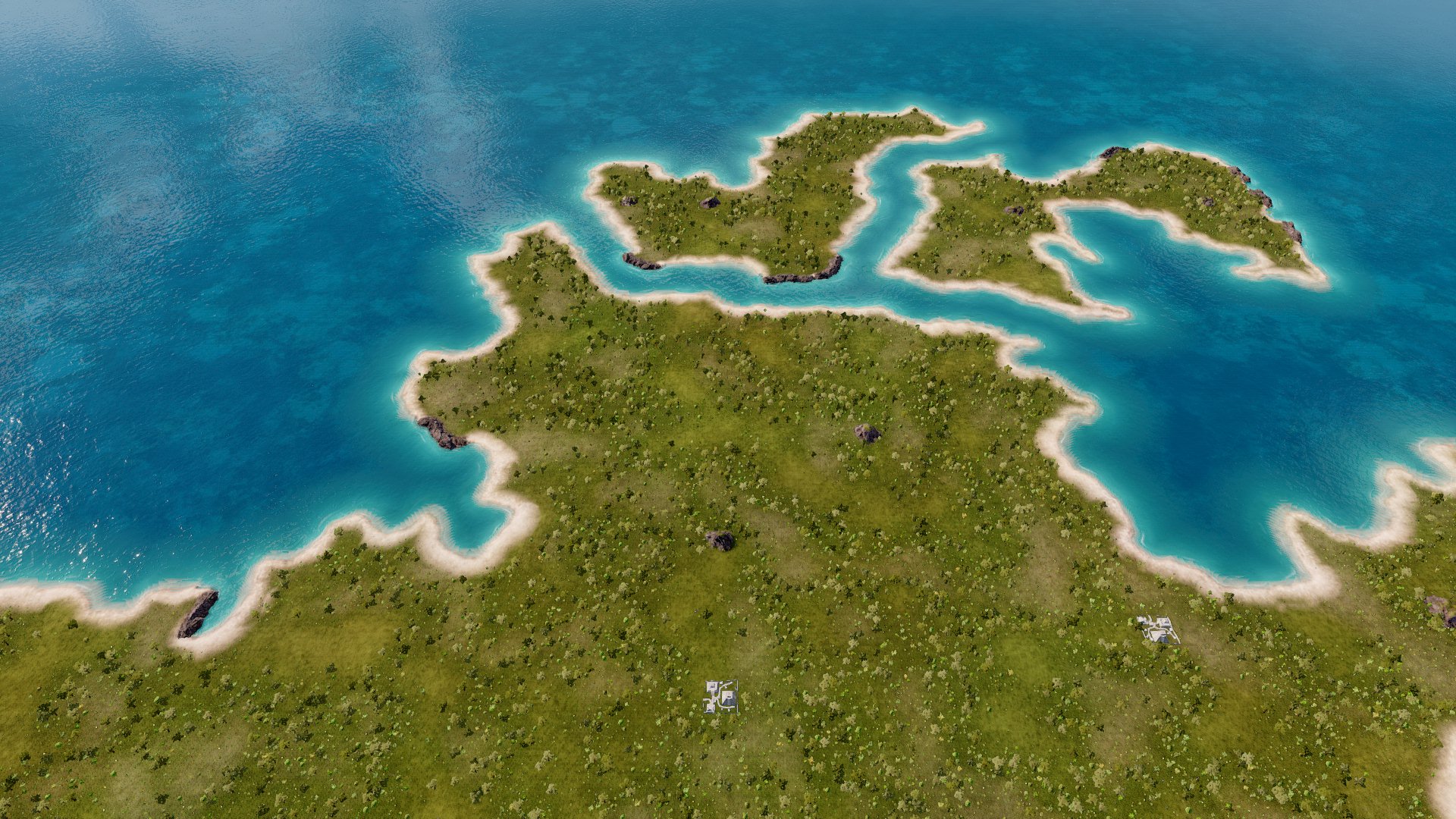 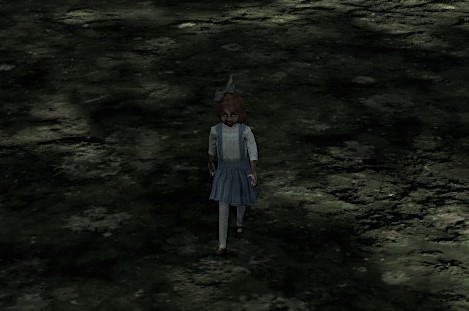 Fox's guide to resources in Tropico 6
A handy guide to all the resources in the game, whether they're renewable or not, and what produces and consumes them - including upgrades and work modes
55 ratings

Achievement Guide for Tropico 6
A comprehensive guide to every achievement in Tropico 6. If DLC achievements are added, I will resolve those as quickly as possible.
35 ratings 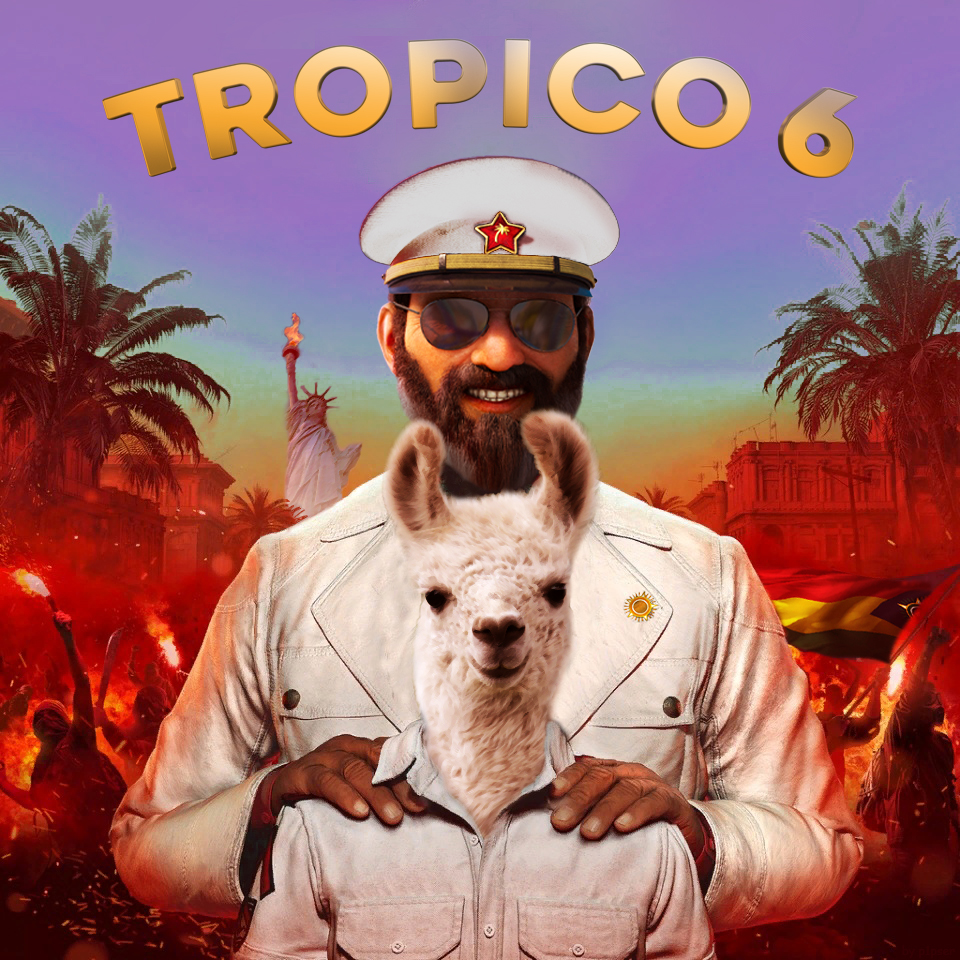 Guide to getting filthy rich with Tourism
This guide rolls back the veil of mystery and despair surrounding tourism and reveals how to make gobs of money with pure tourism. 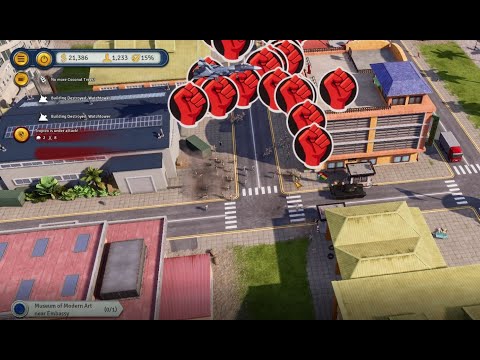 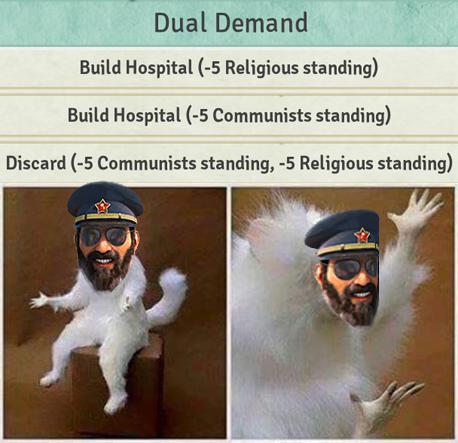 0
3
When you play this game on hard difficulty 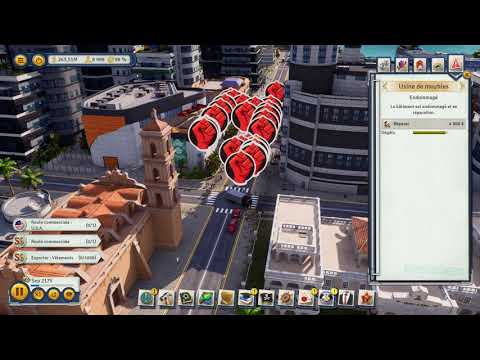 The Referendum (Mission 12 / Apocalypso Achievement) - Easy
A list of things to complete mission 12: ‘The Referendum’ the easiest way possible. 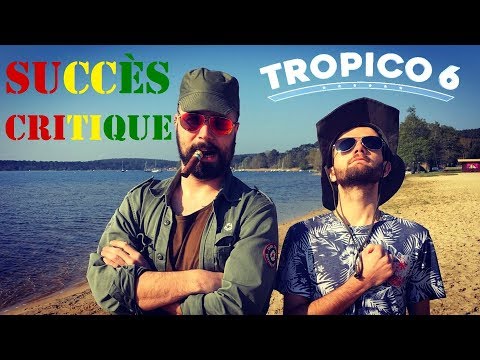 Recommended
32.0 hrs on record
i like all these games just good ol fashion fun!! 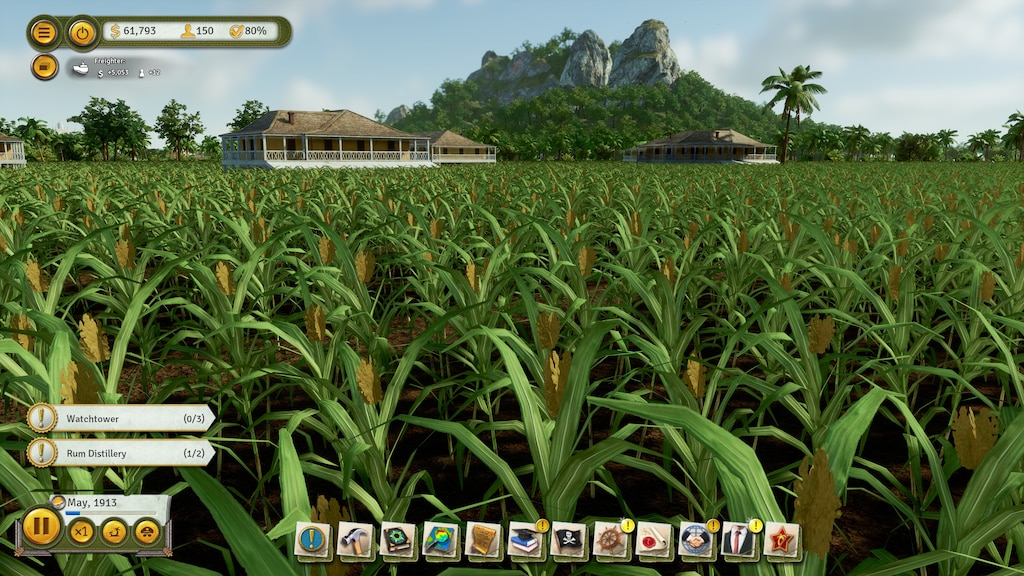 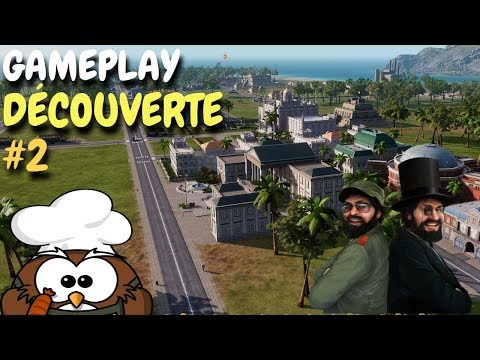 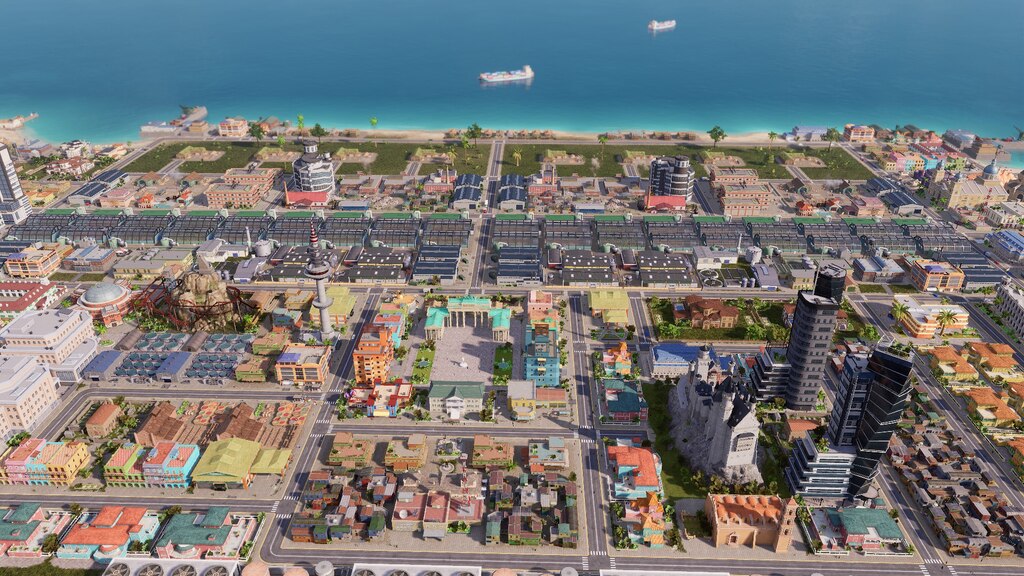 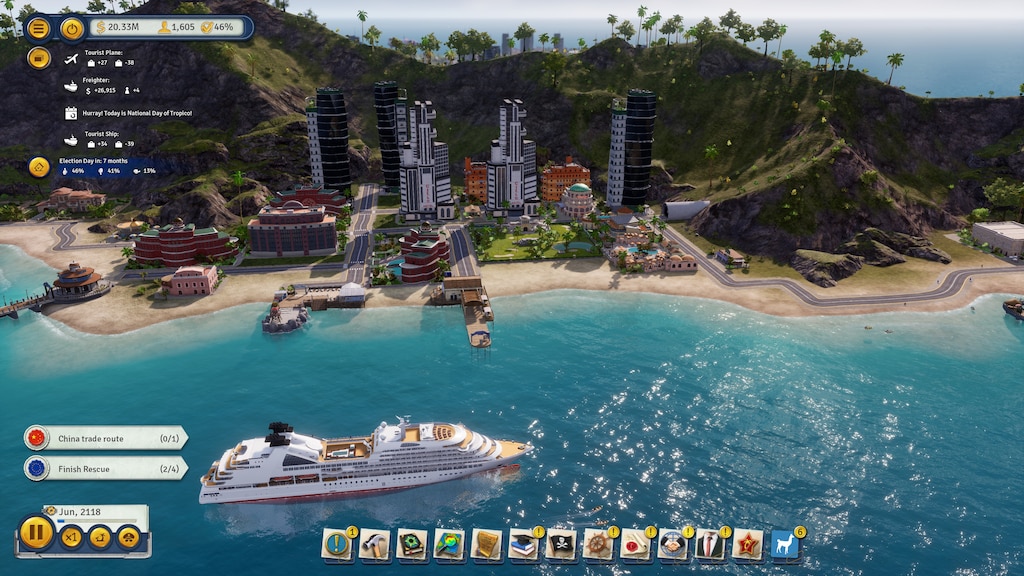 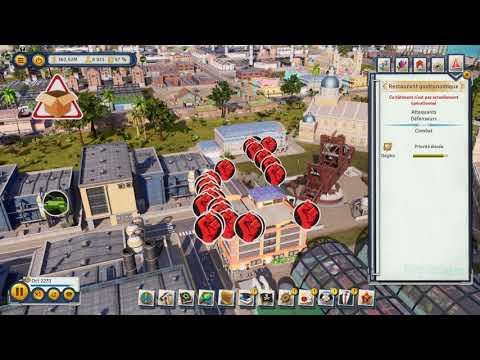 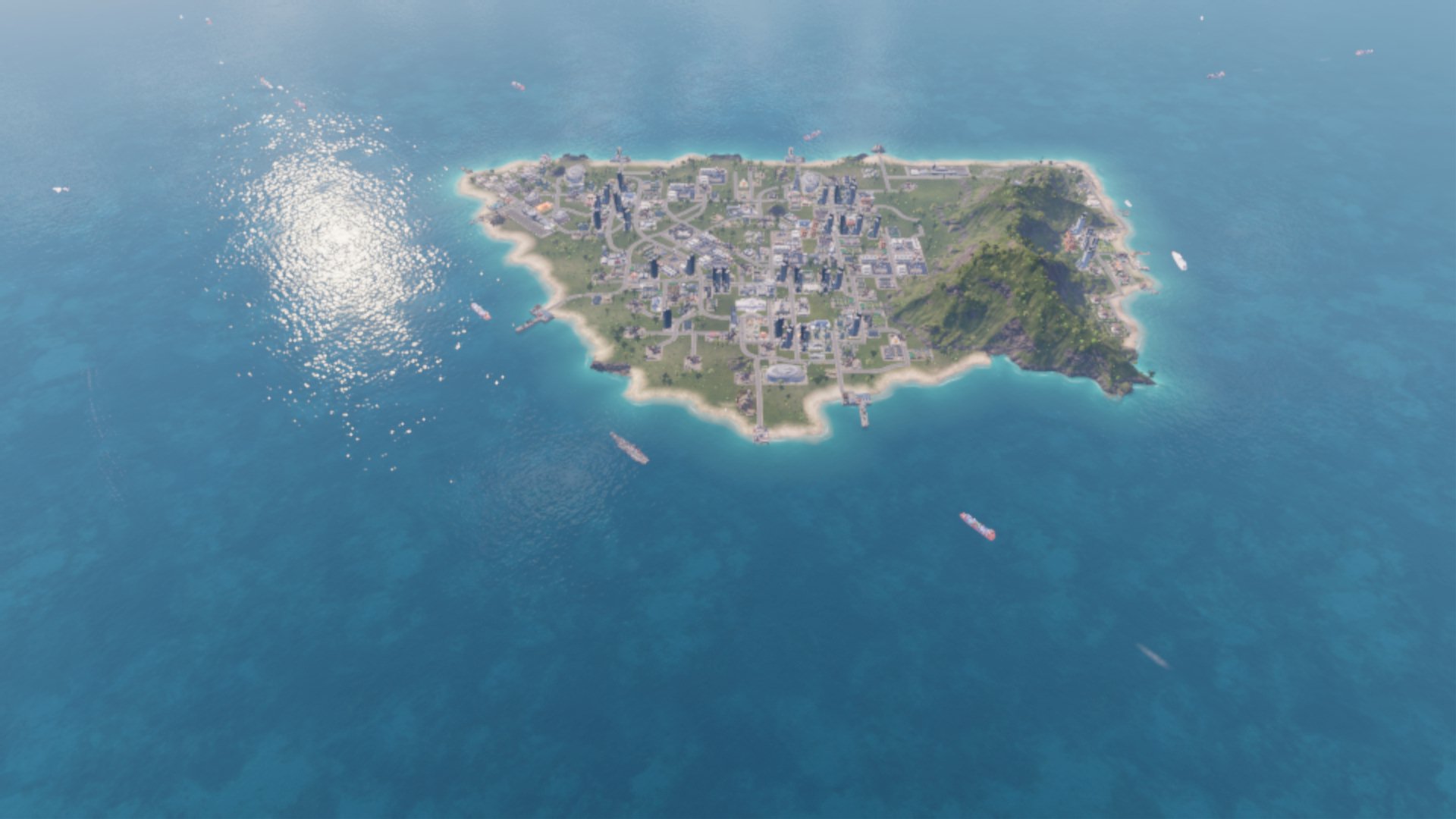 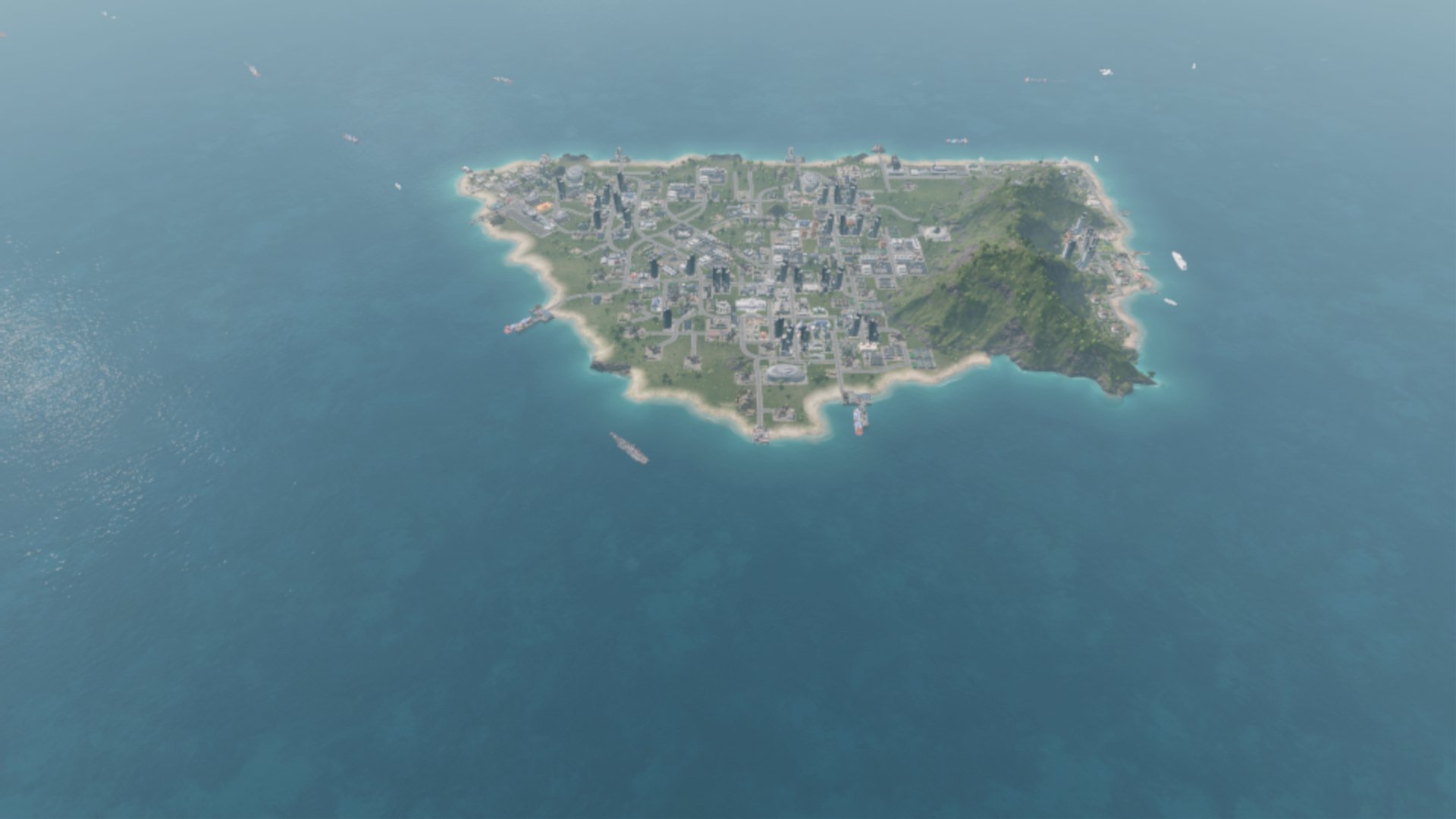 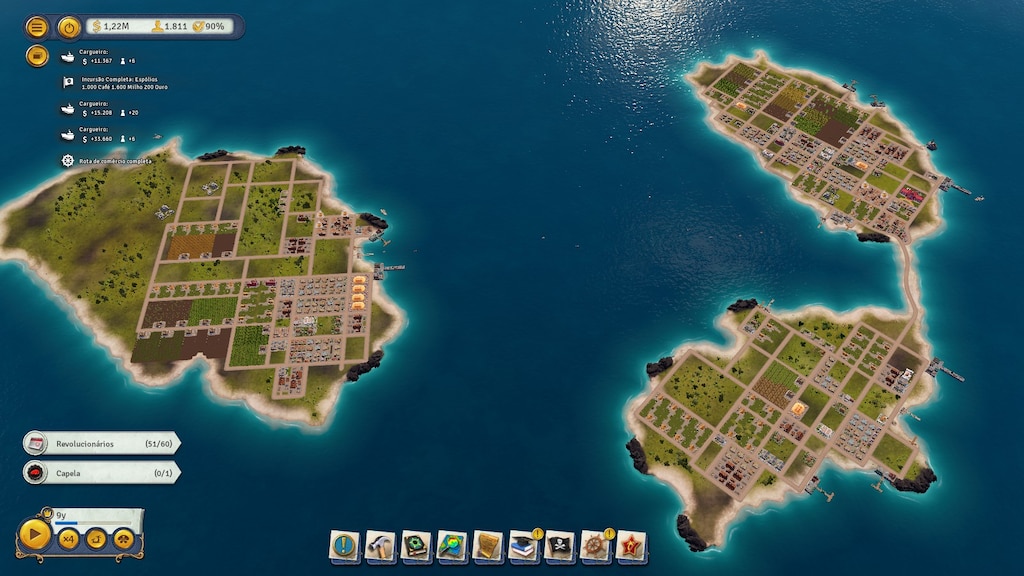 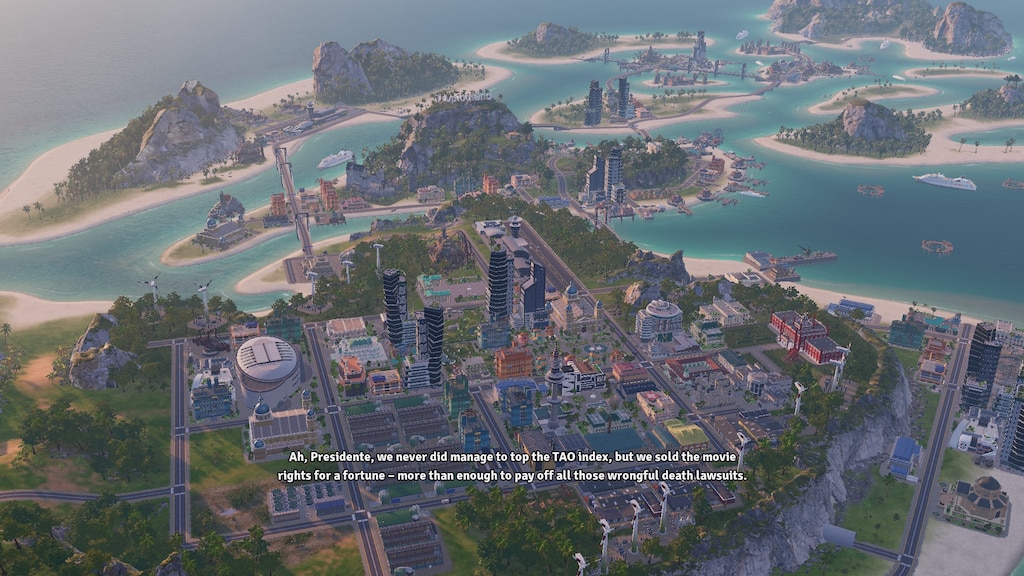 Not Recommended
19.1 hrs on record
I like the graphics and the way in which the game has kept some of the original features. However, I feel that there is a severe lack of choice in the levels like there used to be and they have been made a lot harder, which has put me off playing the game.

gillianclark44
12 products in account
0
Immersion DLC request
Hey Kalypso, I would like to make a request for a DLC. Wouldn't it be cool if we could select random tropicans and set them to a "focus". Give us a 3 or 5 focus slots and once tropicans are selected script up some random events for those focused tropicans. If you wanted to keep it simple you could have 30-50 random events and just cycle through them. Don't make the events pop to often or they will become tedious. An event every hour of gameplay or so would be good I think. If you really want to impr...
9

simona.sergi.84
20 hours ago
General Discussions
Celebrating the Tropico 6 Free Weekend
Jul 9
Check out our discounts on all titles of the Tropico Franchise

Tropico 6
96
13
Tropico 6 free to try this weekend on Steam, new 'Lobbyistico' DLC available now
Jul 9
Tropico 6 is free to try this weekend for all Steam users. Unanimously praised by critics as the greatest, most attractive dictator simulator of all time, we thought it would benefit everyone to share in its glory, and we look forward to welcoming a host of talented new players, with big brains, to the shores of the republic.

Additionally, Lobbyistico, Tropico 6's third DLC, is out now and it's a great DLC - amazing DLC if you look at a long lineage of amazing content made by a very smart company. "Incredible DLC" - it's always been said, and that's no surprise, really. The appearance of DLCs like this one is rare, but when they do arrive, they come in the best packages. "The best DLCs for the best people", we say, because those people and us and companies like that have everything they want in life. More content and more DLCs, really. Bigger and better than anybody else.

Lobbyistico DLC offers unprecedented access to big league politics, more so than any other video game. The European Union has arrived on the isles of Tropico and with it, new buildings such as the El Presidente Club - a brilliant place to meet with the best leaders and lobbyists to discuss tremendous and well thought out political ideas. Another new addition is the Corruption Agency, a terrific and reputable outfit whose services can be employed to fight the spread of corruption - or at least sweep it under the rug.

Tropico 6's Lobbyistico DLC is available now at the Kalypso Store and on Steam, with PS4 and Xbox One versions to arrive later.

About Tropico 6 - Lobbyistico DLC:
What do the European Union and corruption have in common? Nothing, of course, since the EU is as pure as a drop of finest Tropican rum. So why not run a field study and get to know more about this curious political entity; and why not run it from the great nation of Tropico, so famously governed by corrupt politicians (except for El Presidente, of course)? Join the EU in their investigations into 'corruptionomics' and unlock powerful new perks in Tropico 6 - Lobbyistico DLC.

Corruption lies at the heart of the Lobbyistico DLC. Invite faction leaders as lobbyists into the El Presidente Club and conduct backroom politics to unlock a unique new set of perks to boost the economy and manipulate faction standings. However, with increased lobby work comes increased corruption, all of which will impact the wider Tropican economy and society.

Fight the spread of corruption - or, let’s be honest, just try to cover everything up - using the new Corruption Agency. Enjoy two new traits, three music tracks and a fetching new set of customization items for El Prez and his palace.