Slime Rancher is the tale of Beatrix LeBeau, a plucky, young rancher who sets out for a life a thousand light years away from Earth on the ‘Far, Far Range’ where she tries her hand at making a living wrangling slimes.
$19.99
Visit the Store Page
Most popular community and official content for the past week.  (?)
Pool Party Update
May 26 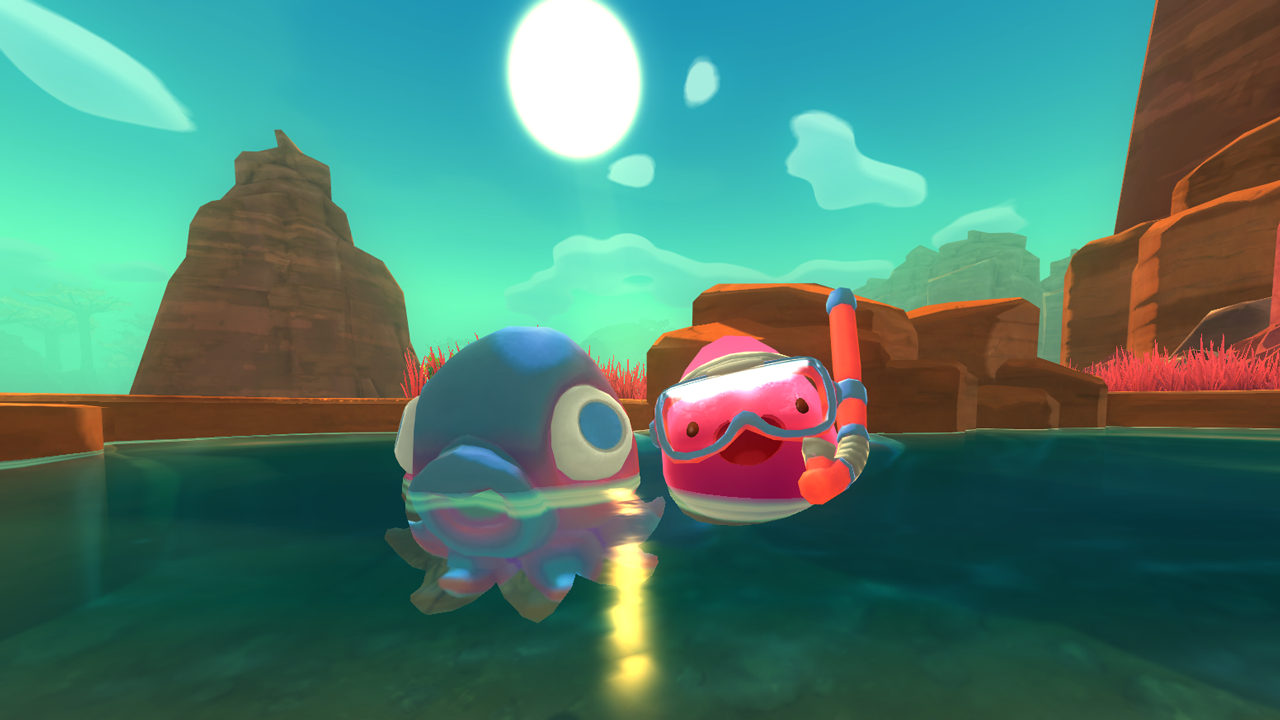 Hey ranchers! Today, we've got a little summer-fun update for you today ːslimetabbyː

New Fashion & Playset
Party Fashion - With these super rad Party Glasses, your slimes will be the stars of the party! Just note that the Party Hat + Glasses combo is a unique fashion for our VIPG (Very Important Party Gordo).

Scuba Playset - This new Playset includes a Scuba Fashion Pod and Octo Buddy Toy! Slimes that are wearing the Scuba Fashion love to play with their best pool-pal, Octo. 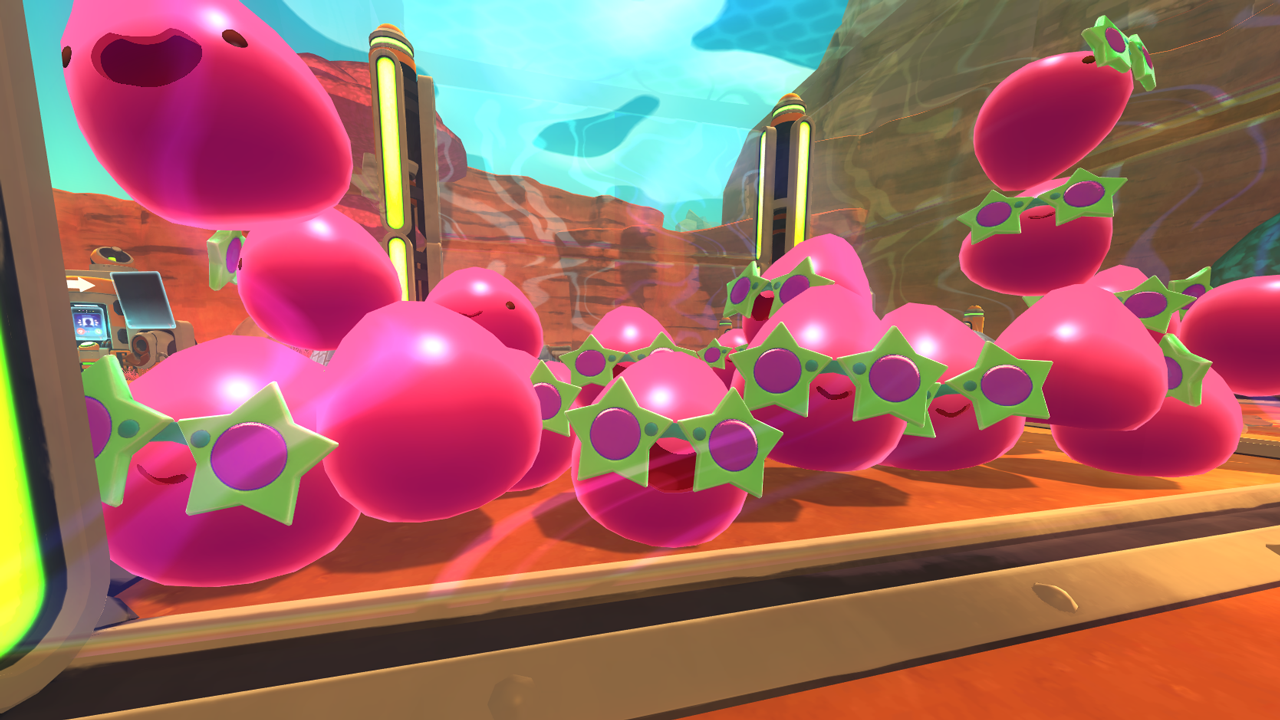 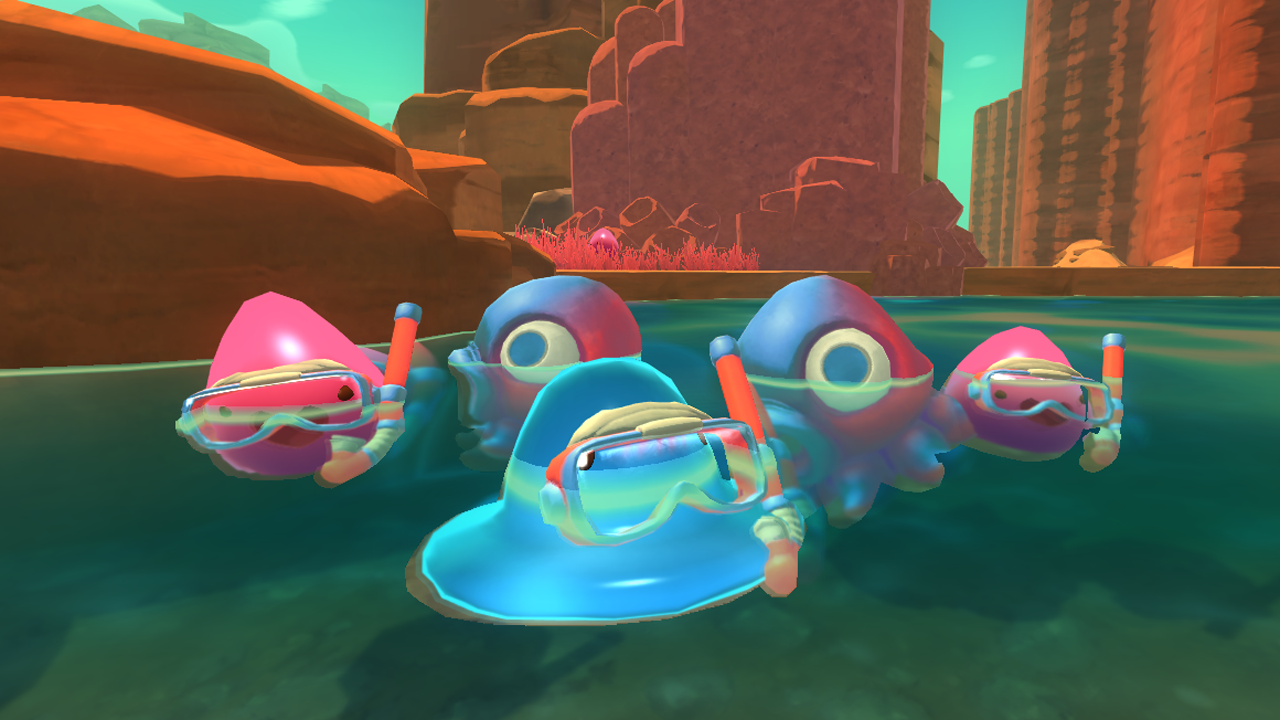 Workshop Disposal
Things were starting to get a little crowded down in Viktor's Workshop so he built a recycling system to help keep the place tidy. Go ahead and toss any unwanted items or slimes into the water chute and Viktor will see to it that they are recycled or released back into the Far, Far Range!

Minimal HUD
Have you ever wanted to take a little break from ranching and just enjoy the sunset in the Ancient Ruins or the sunrise over the Moss Blanket? Give the 'Minimal HUD' option a try!

Be sure you're extra careful if you use it while exploring! You may find your jetpack has run out of energy halfway through a risky jump across a wide canyon that spans across the Slime Sea... ːslimescaredː

Patch Notes
New Features:
- Now every day can be Friday once you’ve unlocked the new Party Fashion Pod (party hats not included).
- Make a splash with the Scuba Playset!
- Added a “Minimal HUD” feature so you can relax and enjoy the scenery.

Changes:
- Added a disposal mechanism to Viktor’s Workshop to help recycle any unwanted items.
- Reduced the frequency in which the game will passively auto-save.
- Added auto-save checkpoints after: a Slime Gate is opened, a Ranch Expansion is purchased, and a 7Zee Rewards Club level is purchased.
- Gamepad now scrolls through menus quicker. Scroll through your dozens of ornaments faster than ever before!
- Improve Gadget Mode messaging to better emphasize the ability to rotate gadgets.
- A few ranchers accidentally deleted their collection of gold plorts and rare ornaments, so we made it take a little bit longer to demolish Silos.
- Range Exchange icons will now change to reflect a slime’s active secret style (from the Secret Style Pack DLC).

Fixes:
- Enhanced the delicious, smoky aroma of the charcoal brick toys to make them more exciting for fire slimes.
- Added +5 luck to all lucky slimes to prevent them from being eaten by tarr.
- Fixed an astrophysical anomaly that was causing phase lemons to shrink in size.
- Also fixed a similar anomaly that was preventing phase lemon trees from casting shadows.
- Fixed a bug related to the “Boop” achievement.
- Fixed an issue with hunter largo mouths.
- Fixed a missing music track that should play while relaxing by the Slime Sea at night.
- Fixed a rare issue that you could run into while collecting gilded gingers.
- Corrected some typos and grammatical errors in the Spanish and Russian translation.
- Fixed a very science-y issue with quantum slimes. (It would take at least 6 years of University, plus a deep understanding of Slime Science to understand it fully, so we’ll just call it the “Failure to Duplicate Phenomenon”)
- Fixed a bug where Range Exchange reward crates were not persisting between sessions.
- Fixed a UI issue so mouse icons will properly display in tutorial popups.
- Fixed an issue where the autosave icon wasn’t appearing when the game autosaved after a rancher got knocked out.
- Fixed some bugs that were resulting in errors when trying to load an existing save.
- Fixed an issue where Mochi’s Nimble Valley tutorials weren’t clearing properly.
- [XB1/PS4] Fixed a number of pesky bugs that were the cause of a handful of game crashes.
- [PS4] Fixed a graphical issue that was causing water to be extremely reflective.


There are even more Slime Rancher adventures in development, but we’re not ready to reveal them just yet! Look forward to getting a peek of what we have planned… when we’re ready ;)

Until then, stay wiggly!

Alex [GER]
6 hours ago
General Discussions
Game crashes all the time
When I'm ingame it freezes between 10 seconds and 2 minutes. Then it crashes. I tried reperation mode from steam, reinstalling, new game / old game, nothing helps. I lowered the grafiks, didnt help. I played with controller / with the keyboard, didnt chan...
30

Every Slime Explained
Hey there! This is a little guide on all of the current slimes in the game, just to help you out a little, if you're new to the game or not. Be sure to rate and favourite this guide if it helped you!
14
64 ratings 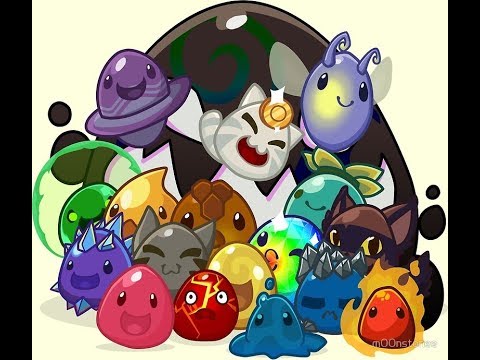 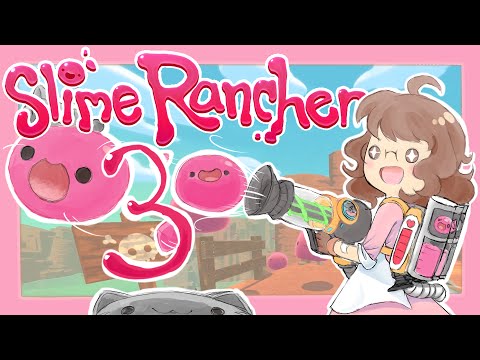 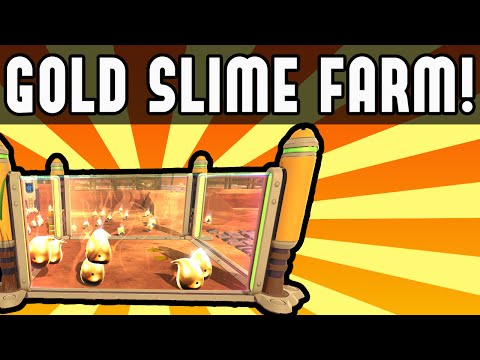 AdamBomb
View videos
Ideas for future updates
I've been playing for a while now, and loved how the game has changed since alpha. Not to mention the automation. I have a few ideas on how this game could be even more exciting and fresh. 1. Map Builder for new places to show off to players. 2. Worksh...
4 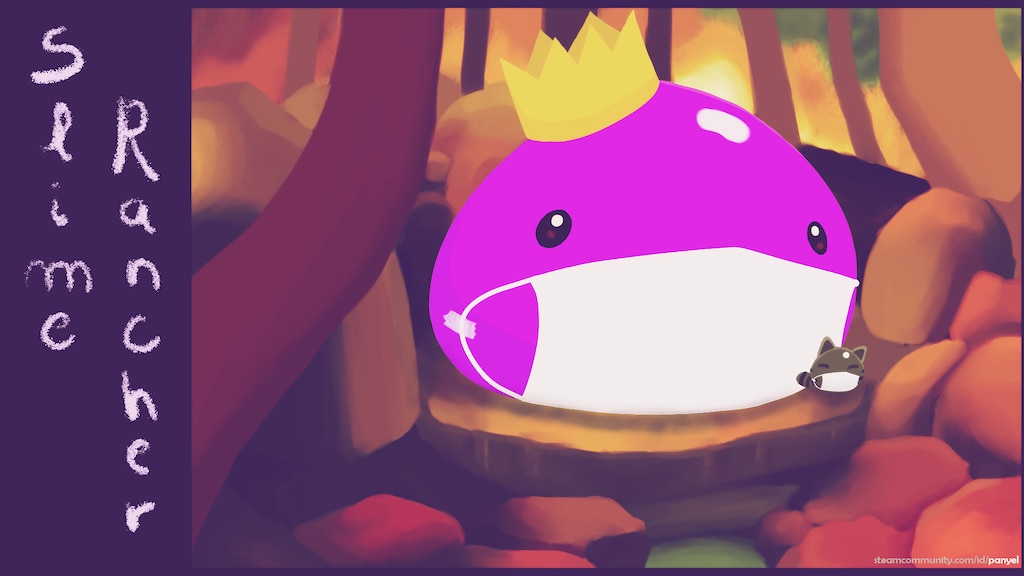 5
Ban
40
Slime King and his servant during the pandemic 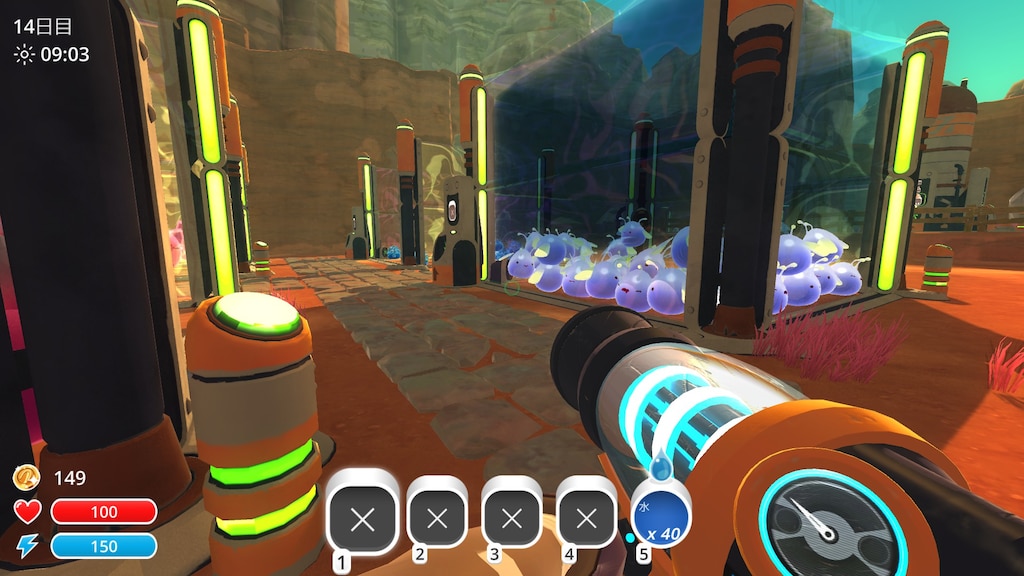 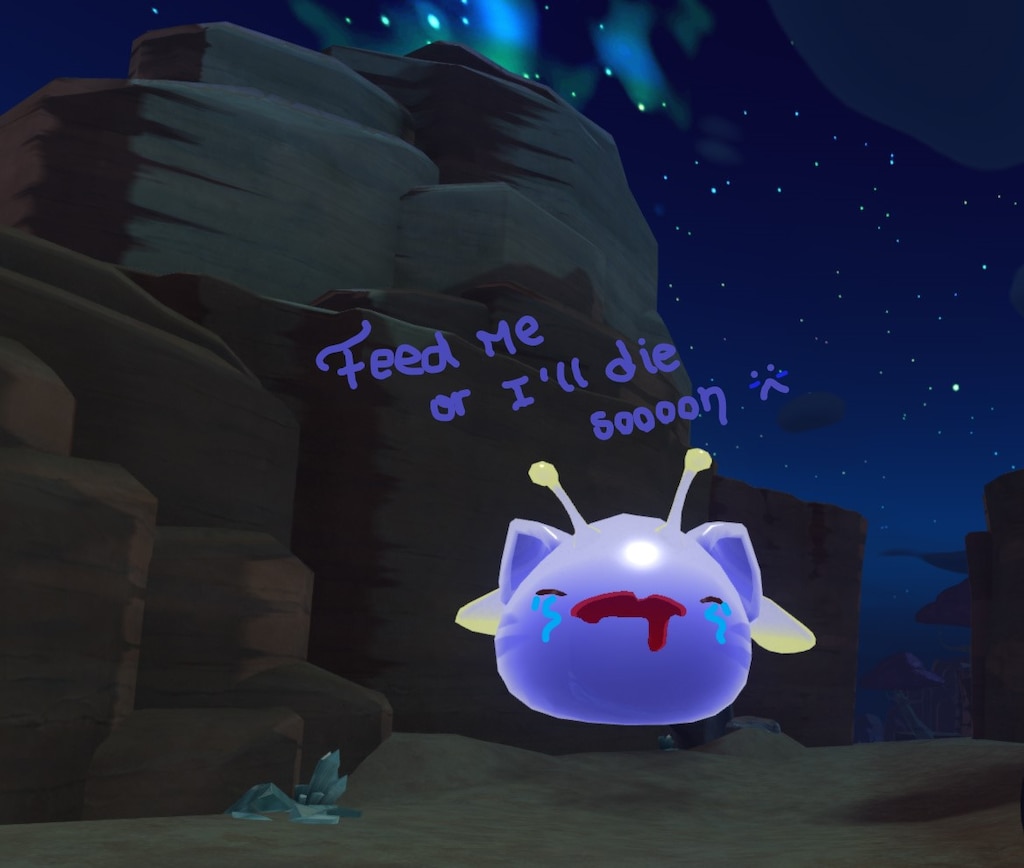 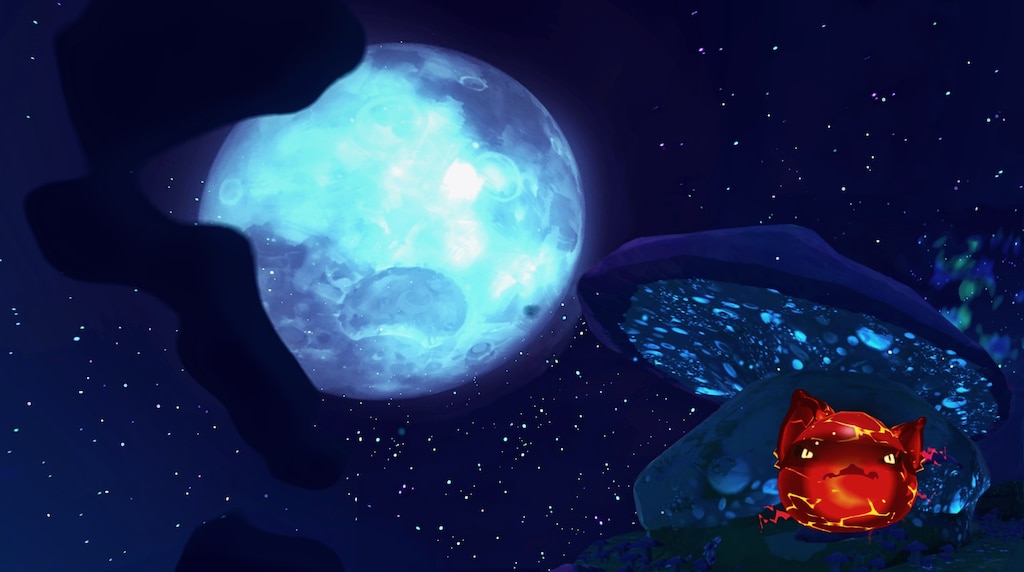 Fuego Fatuo🖤
View screenshots
Anyone Else Having Crashes
Now and again the game crashes suddenly for no reason. I don't know why. I have a GTX 1660TI graphics card and a 16GB memory. I can still run the game so far in safe mode but not sure for how long. Any tips?
5 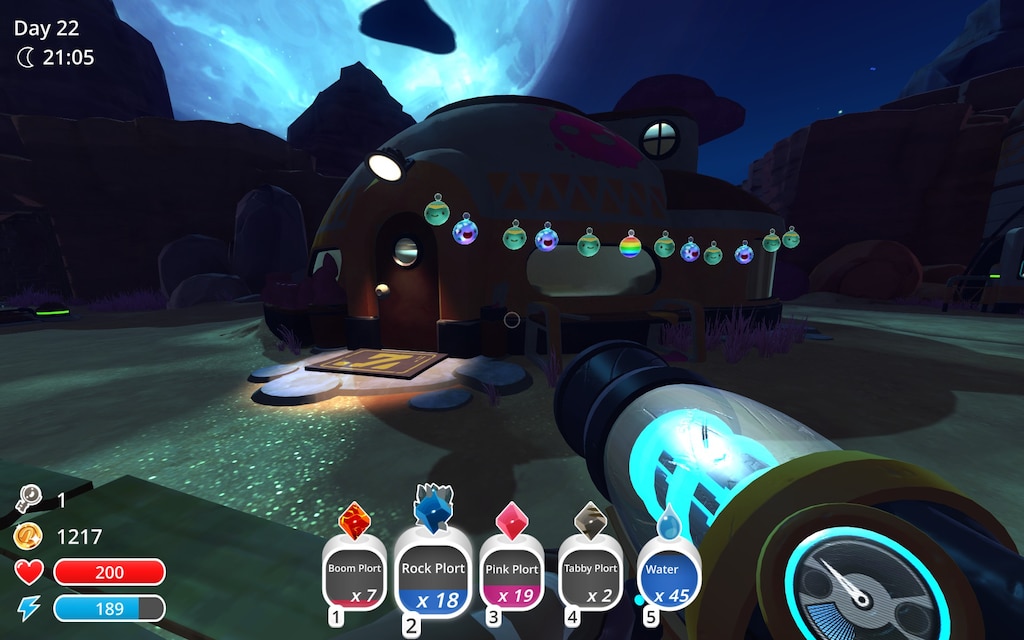 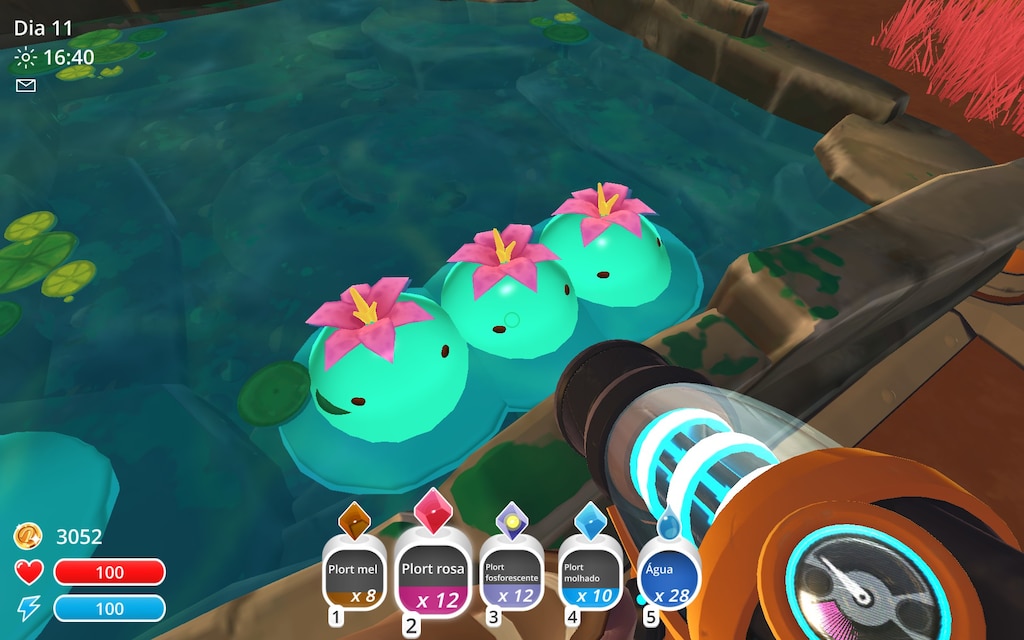 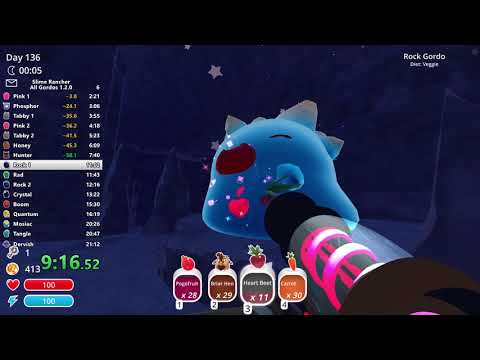 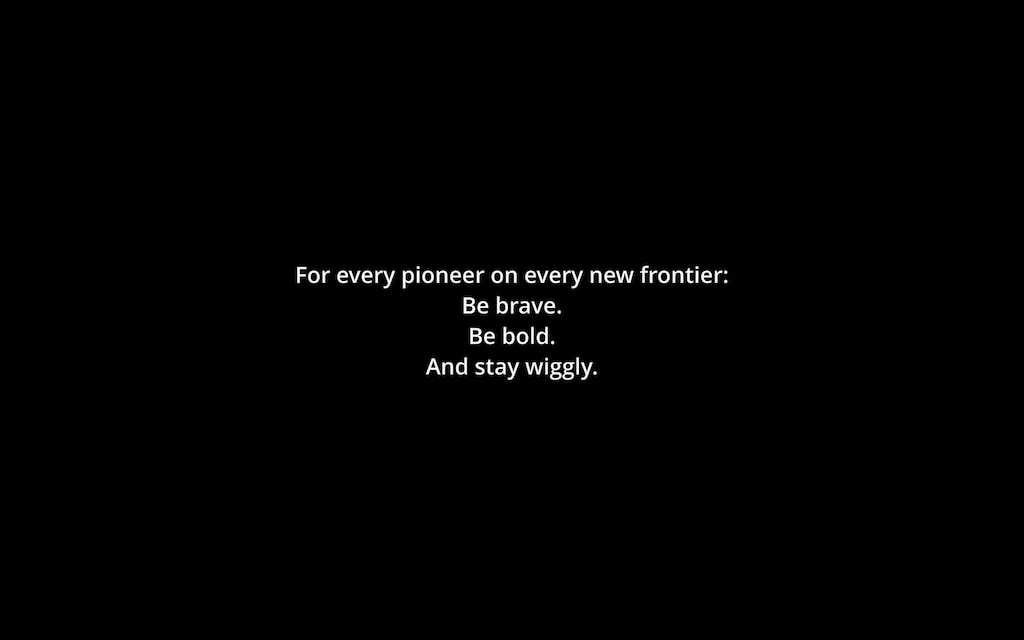 Recommended
95.4 hrs on record
buy it

Recommended
27.6 hrs on record
really really fun happy little relaxing game.
enjoyed my time thoroughly with it.
worth the price 100% now after two+ years of free updates especially with a sale.
9/10 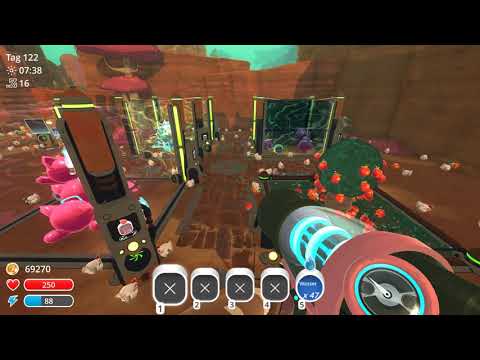 How To Unlock Treasure Pods
Have you ever walked around the world of Slime Rancher, and encountered a colourful little pod, and wondered how to open it? This is a quick, simple guide for beginner ranchers on how to unlock all 3 tiers of the treasure pods.
0

Wotan
View all guides
Should I rework my ranch into free-ranging?
Given that we have so many expansions with all the updates, I'm thinking on moving from an drone-optimized corral full largo farm ranch layout to a similar one with free range instead. Pros: - Larger slime capacity (currently even a single food-producing ...
5

Hope everyone is doing well and taking care of themselves. I wanted to share a quick update on what we've been up to and to point you towards some great community resources that can help you connect with other ranchers.

A few weeks ago, our studio transitioned to working remotely in order to ensure the safety of our team and our families. While video calls are not our preferred way to collaborate with each other, we are still working hard on building new adventures for you to experience in addition to the next Slime Rancher update.

What's Next
Slime Rancher update v1.4.2 will bring some new bits of content, but is primarily focused on improving performance, adding a few community-requested features, and some additional back-end tweaking. We will be sharing more information on this update in the coming weeks. 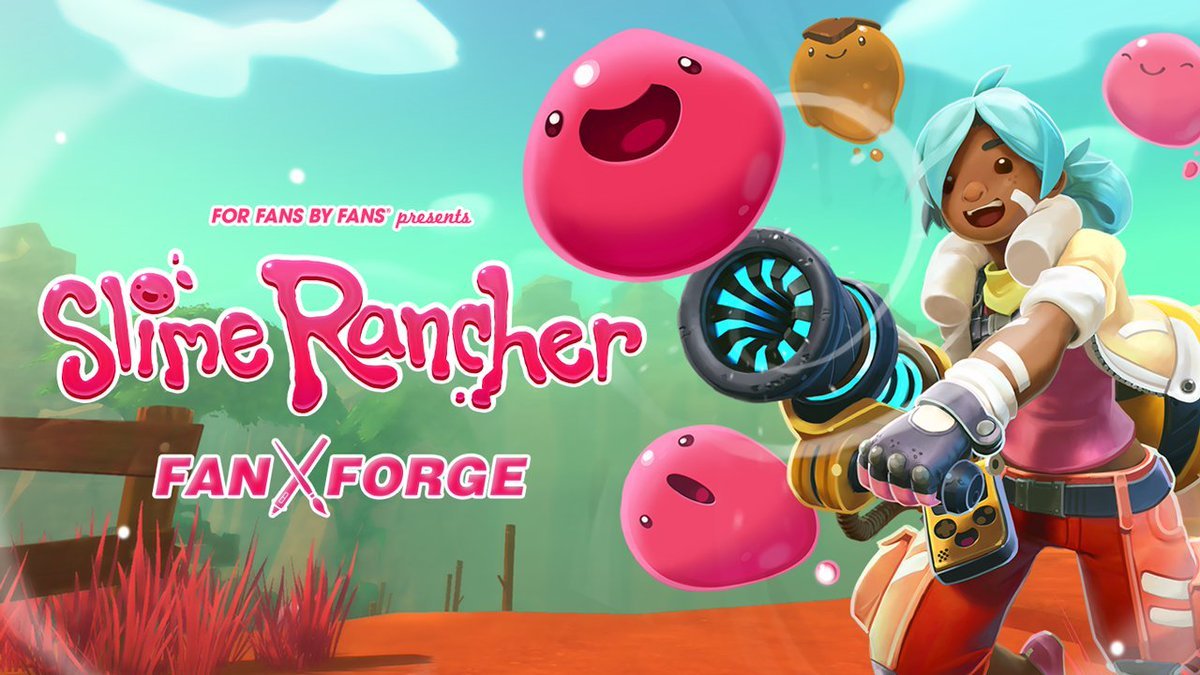 We’ve already seen a ton of amazing community designs come through, but we would love to see you submit your artwork and vote on all of your favorite designs.

Here are just a few of our favorites, which is yours? 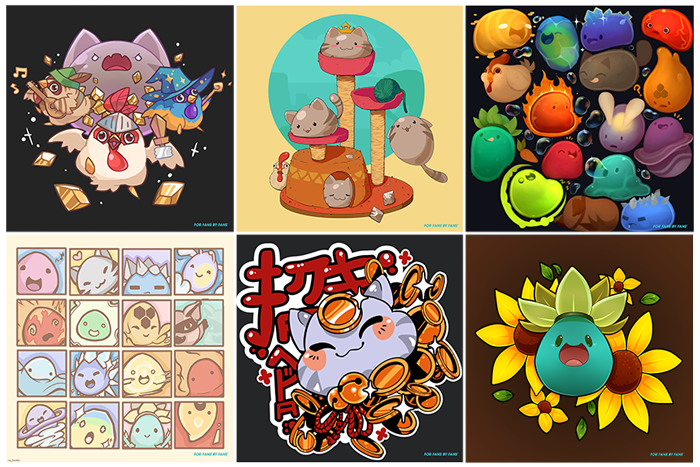 Keep an eye out for another announcement showcasing merchandise from all of the top community designs in just a few weeks!

While the opening round of submissions is all wrapped up, you can still submit and vote on artwork in the Fan Forge. For Fans By Fans will continue to choose top community designs to be printed as official Slime Rancher merchandise!

Learn how to vote & submit here![www.forfansbyfans.com] 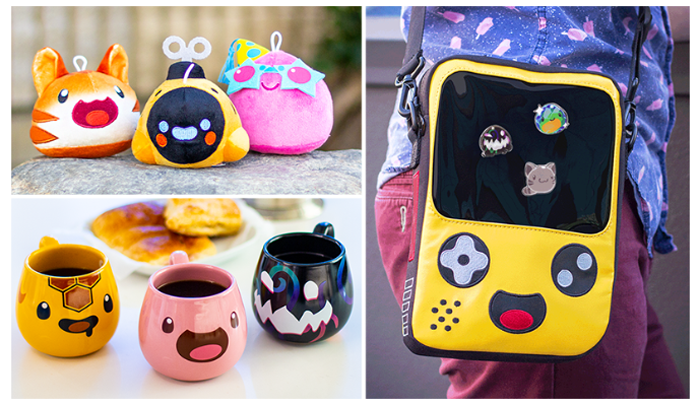 Plushies, Mugs, & More!
Speaking of For Fans By Fans[www.forfansbyfans.com], have you seen all the Slime Rancher stuff they've released recently?
I'm honestly running out of room on my shelves. They were literally overflowing with slime plushies already and then they had to go and make not one, not two, but three perfect little plushies. How dare they do this to me!?

And the list is about to get longer with all the new community designs coming out later this April... ːslimescaredː

Staying Connected
We're hard at work on lots of new stuff at Monomi Park and we can't wait to share what we have planned with you.

Remember to sign up for our newsletter[monomipark.us11.list-manage.com] and follow us on Twitter if you want to stay up-to-date on any Slime Rancher or Monomi Park news. (Trust me, you’ll want to be the first to know about what we have planned next)

You should also check out the community-run Slime Rancher Discord. It's a great spot to hang out with and chat with other ranchers! 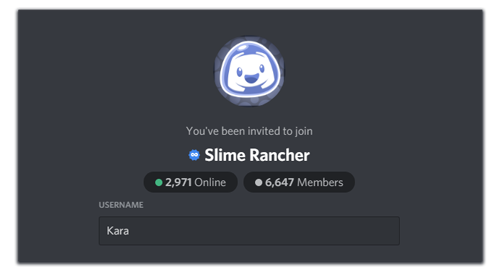 
We'd also love to see what you've been up to on your ranch. If you recently redecorated, snapped a cute photo of your pet tabby slime, or created some adorable Slime Rancher art... share it with us! Either in the Steam Community Hub or on your favorite social media channels.

You can tag us directly using one of the @'s above or use #slimerancher on your posts. We're always ready to like, favorite, and share your colorful creations.


Thank you for being such an amazing community. Until next time...