Aseprite is a pixel-art tool to create 2D animations, sprites, and any kind of graphics for games.
$14.99
Visit the Store Page
Most popular community and official content for the past week.  (?)
Aseprite Discount
May 18
These two weeks are the last chance to get Aseprite at $14.99. We're planning to increase the price to $19.99 on June 1, or probably a couple of days before on Steam because price changes go through a review process on Steam.

Remember that this doesn't change anything for current users, you don't need to pay again to continue receiving updates!

Aseprite
6
72
Quick question about animating
Is it possible to animate something on a different file, then drag said file into another file with all the cells animated?
2

Hatty's Guide: How to Aseprite - The Basics + Animation
A basic guide for those who want to know how simple this program is. ALSO PICTURES! GLORIOUS PICTURES!
41
270 ratings 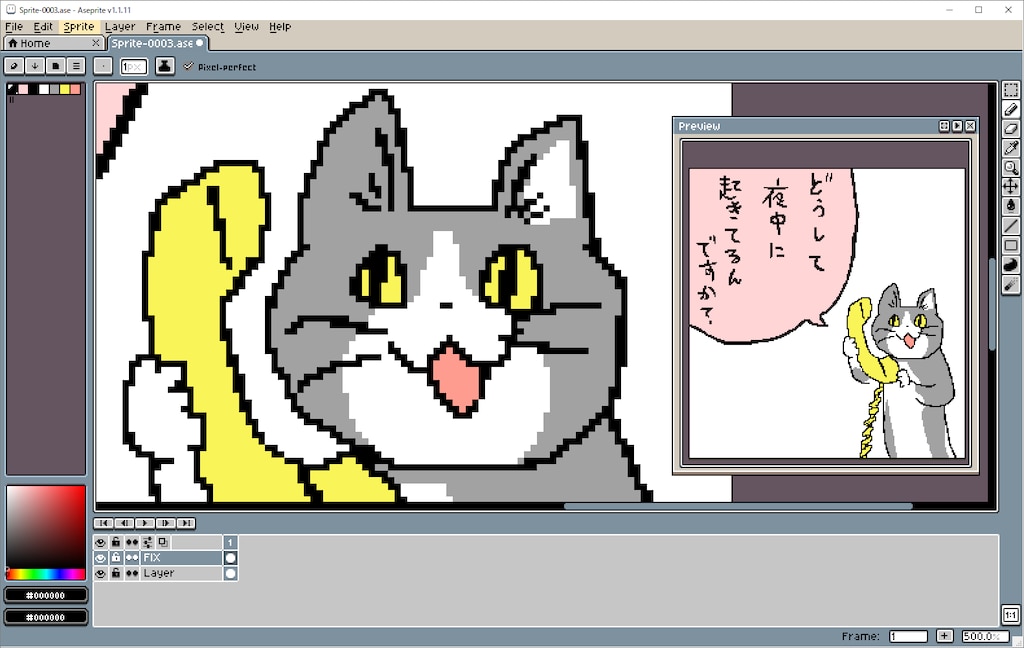 How to Make Animations
Remember, this guide is more of a reccomendation than anything else, so, don't go to me saying how I make you do stuff. Thank you!
26
218 ratings 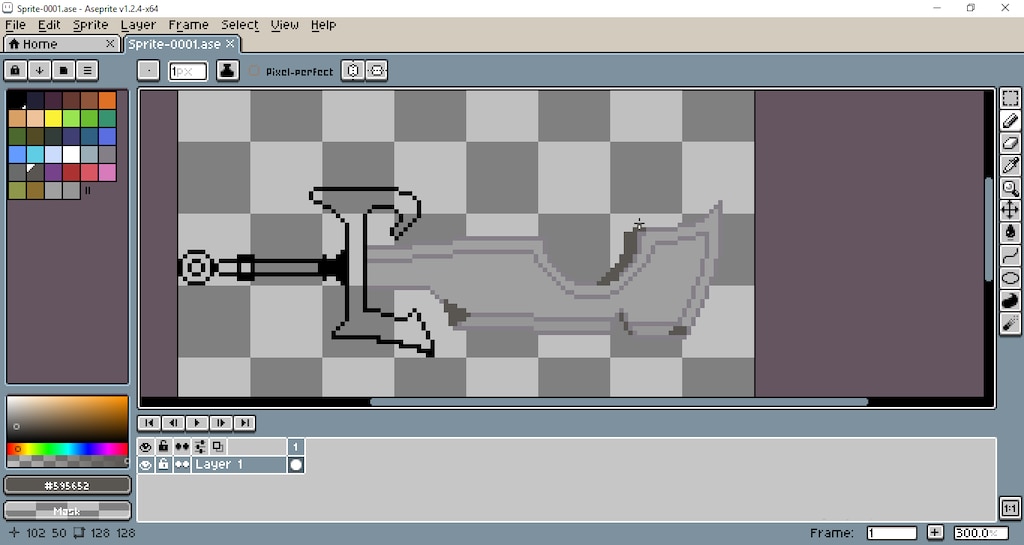 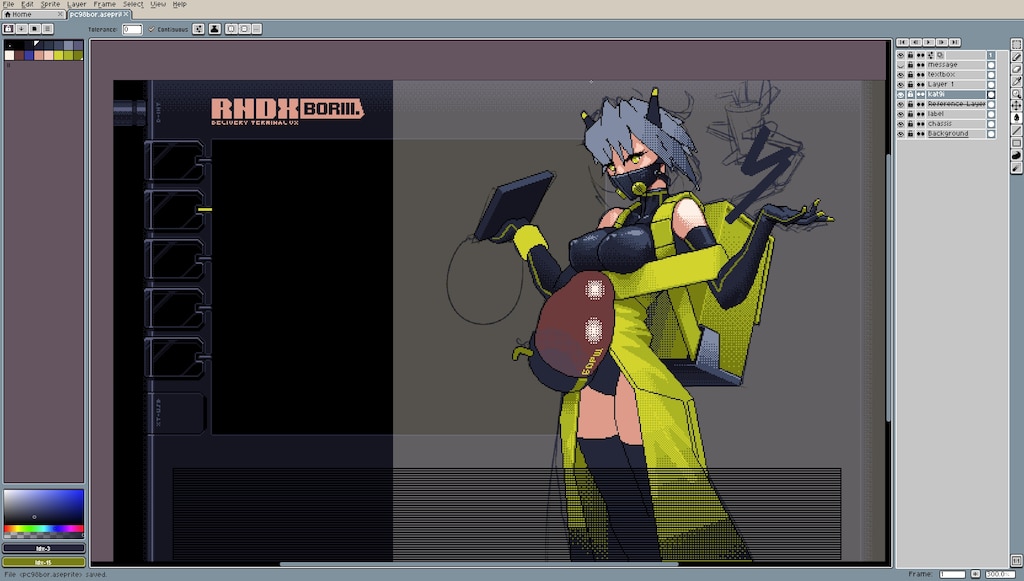 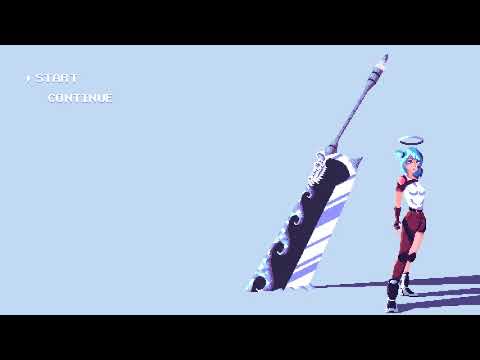 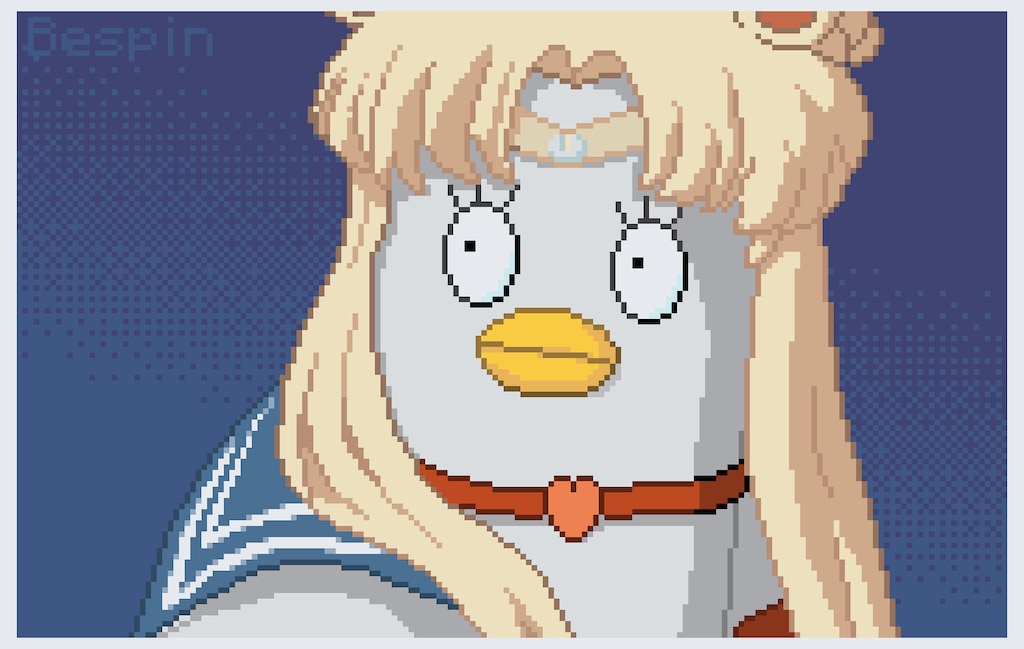 Recommended
268.5 hrs on record
Disclaimer: The number of hours shown isn't anywhere close to my real total. I've been using Aseprite as my go-to pixel art solution for over half a decade. Since I originally bought the product through the Gumroad page, not on Steam, most of that time isn't reflected on this platform. If it were, the number would be well into the thousands.

As for the review: Aseprite is bar none the best pixel art software I've used to date. That's all there is to it. You can stop reading now, if you aren't interested in comparisons.

Now, there's a surprising amount of competition in this pixel art niche. Looking around for dedicated programs, you'll probably hear about MS Paint, ProMotion NG, GraphicsGale, and PyxelEdit. Photoshop is occasionally mentioned by the stark raving mad, as are GIMP and Krita. Those last few being more general-purpose programs, however, I'm cutting them out of the running, as you do not race a cat against a race horse. It's just not a rational comparison.

Now, of the dedicated pixel art software on the market, Aseprite does not have the most features. That award probably goes to ProMotion NG, which has everything from animated brushes to tileset and level design tools. I've used it off and on, both here on Steam and on non-Steam installs. Unfortunately, I've found that ProMotion is a bit of a monstrosity - its approach to workflow hearkens to the old days of image processing on a Commodore Amiga, and doesn't have modern luxuries like a proper selection tool, or shortcuts a standard-issue human can master without a cheat sheet and a couple weeks of practice. Because of these design choices, there's really not much commonality between it and most other graphics editors out there. As a result, powerful as it is, the learning curve is perhaps too steep. As for its development cycle: while the devs are responsive on community pages, updates are glacial, since the same team is spreading their efforts around to multiple projects.

Meanwhile, our other competitors: GraphicsGale is free to use, but no longer in development (last update in 2017). It's most well-liked for its animation tools, which Aseprite has in at least equal measure. Pyxel Edit can be gotten for $9 and, by all accounts, has some interesting tileset and level editing features. That said, it comes off feeling clunky whenever I use it, its devs are semi-silent and its development has been standing still for a good long while now, so God only knows if it's still worth the trouble. And finally, MS Paint is...well, it's MS Paint, is what it is. It is what you use when you don't have a better option, or when you want to challenge yourself. Can it do the trick in capable hands? Certainly. Would most artists use it professionally? Nope.

Which brings us to Aseprite. Besides having most of the features I've seen elsewhere, I've found Aseprite's usability rating to be the highest of the lot, with easy editing for palettes, tools which were clearly designed by someone who understood art workflow, and the easiest-to-use animation features I've encountered anywhere. (That includes dedicated animation software.) Its shortcuts are generally similar to those used in other programs, and where they aren't, they're at least easy to wrap your head around: shift+N for new layer and alt+N for new frame, for instance. As for those features it does lack, such as tileset editing? Those are on the way. Seriously, there are screenshots and videos from the dev on his Twitter page. We just got brush sensitivity for graphics tablets last month, which was the other big thing Aseprite was missing in my eyes.

All told, Aseprite isn't just the best all-rounder for pixel art. It's also the easiest to learn, the easiest to actually work with, and the most frequently improved upon. It is a bit pricey compared to some of its competition - but with frequent updates and an active community, that's worth the price of admission. If you're looking for an all-purpose pixel art package that doesn't require a minor in computer archaeology to master, I could not recommend it more highly.

Recommended
29.5 hrs on record
I'm a beginner pixel artist and I'm trying my best to learn Pixel Art, I'm so glad I chose this software, it's highly functional and easy to use and understand, has many different tools and functions that will help you make good art no matter what your level. I absolutely recommend it and I'm deeply in love with it, and damn it's just $15 which is extremely fair and I wouldn't mind even if it had a higher price because it's definitely worth it, I'm really hyped to be better and if any of you guys have some tips for a beginner like me or can teach me some stuff send me a message please :)

Recommended
15.8 hrs on record
This is probably the best tool you can use to make pixel art. If you're used to a simple program, then this will be a big leap, but it is completely worth it! I would definitely recommend this tool.

Aseprite 101: Pixels and You
Tips, tutorials and resources for those who are new to the art of Pixeljitsu.
1 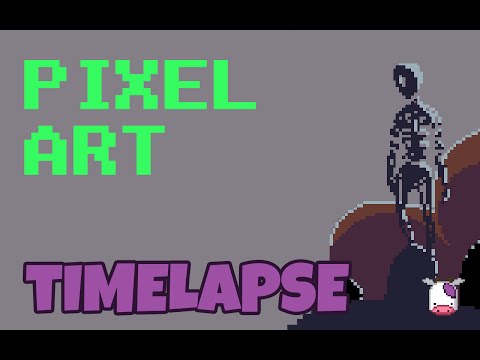 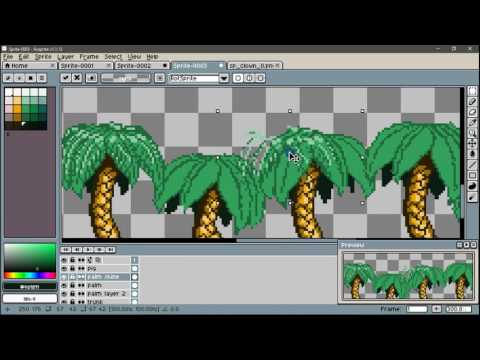 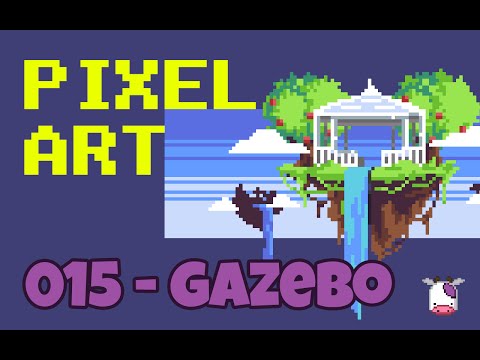 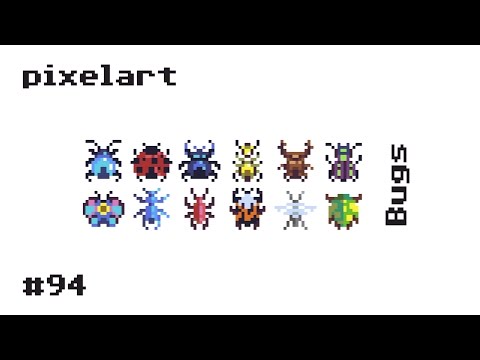 Bakudas
View videos
Aseprite v1.2.18
Apr 24
Hi asepriters! We hope you are taking care of yourself in these hard moments we all are living. Today we are releasing Aseprite v1.2.18 with important fixes and a little new feature which you can start playing with:
How to update Aseprite?[www.aseprite.org]
Official announcement[community.aseprite.org]

Aseprite
19
305
Dithering with opacity
I'm sure this has been asked but I can't find it. I'm trying to dither a sprite but the edges have a low opacity. I turn my brush into a dither texture but when I go over a color more than once it adds alpha values.. I only want the alpha value I am pai...
2

JB
May 23 @ 3:59pm
General Discussion
What is something that keeps you motivated to get better at Pixel art?
When ever I suddenly decide to try to draw and learn pixel art I draw like a few crappy sprites and then not touch Aseprite in a long time. What are some things that keep you guys motivated?
1

Darunia
9 hours ago
General Discussion
Raise in price?
Aseprite is now on sale on the Humble Store and its official site, for ($20 - 25% OFF = $15) I might be wrong, but last time I checked I recall it costed around $15. Has the price been raised? Just because, or is there a new version or feature?
3

LaramyFisk
9 hours ago
General Discussion
Side Scroller Waterfall Tile Help
I've been trying to make a waterfall tile for my side scroller mockup level but I can't seem to come up with anything that looks remotely good any tips? Thanks :)
2