Built exclusively for VR, Arizona Sunshine® puts you and up to 3 fellow survivors in the midst of a zombie apocalypse. Survive solo or in co-op, handle weapons with real-life movements, and explore a post-apocalyptic world in VR. Putting the undead back to rest is more thrilling than ever before.
-63%
$39.99
$14.79
Visit the Store Page
Most popular community and official content for the past week.  (?)
The Steam Summer Sale is coming in hot!
Jun 26
Get the Vertigo Games titles with a sunny discount until July 9th! ☀️

One of the biggest sales of the year has made it back to to Steam and we've got some refreshing deals for you to cool down with! 🌊

Arizona Sunshine is now available as a complete pack! Whether you're a VR veteran or new to virtual reality, if you're looking for the original zombie-obliterating experience then here it is! The Deluxe Edition bundles the game with all DLC and some digital extras, and an item pack for our upcoming co-op shooter "After The Fall[afterthefall-vr.com]"! If you already own any of the Arizona Sunshine game offerings, an upgrade to the Deluxe edition is available too.

If you're just looking to kill zombies, the base game and its DLC are on sale as well!

Looking for some mind-bending puzzling? The award-winning A Fisherman's Tale immerses you in a beautiful story where you will meet some uncanny sidekicks!

Get the Innerspace VR Bundle NOW!

Don't forget about these other Vertigo Games classics:

Skyworld, Skyworld: Kingdom Brawl, The Perils of Man and World of Diving!

Enjoy the summer and happy gaming!

Arizona Sunshine
29
2
Just got the game.
Anybody down to just chill and end some zombie lives. Just bought the game though.
1

Chase B.
Jul 6 @ 11:57am
Multiplayer
This game is not standup compatible
It says it is on the store page, but to even get past the main menu in the RV you have to pickup cartridges which are inside my PC desk and bed, and not when I am standing. Can you remove the misleading feature on the store page please? Not a huge deal breaker, as I move my PC into my living room to play room sized VR, but it's still a lie and I rather keep my PC in my room instead of moving it around....
14 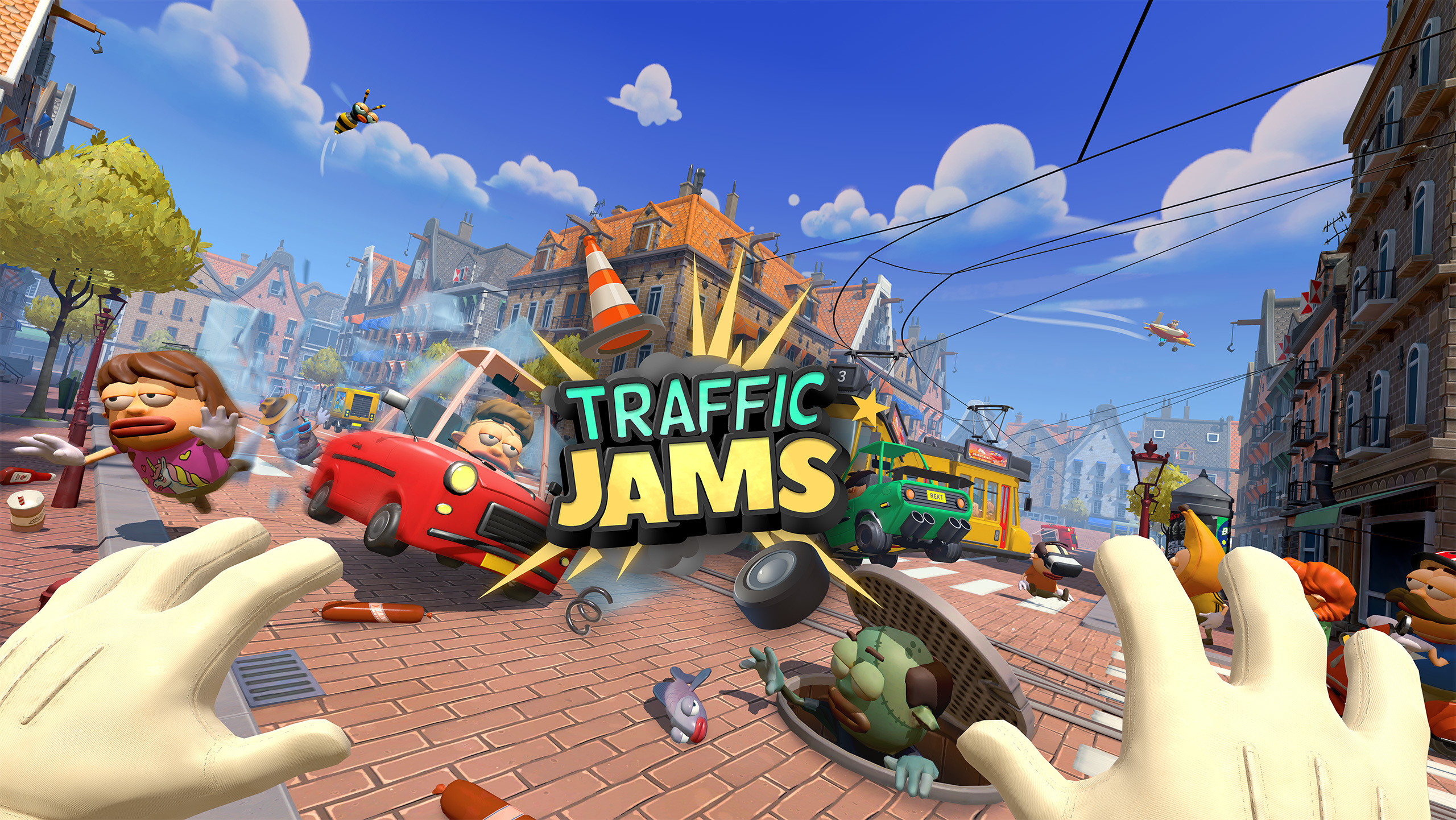 Get your first hands-on with the first level of Traffic Jams in the demo on Steam!
In the world of Traffic Jams all traffic lights have gone out and you are the only one who can keep traffic flowing in the face of outrageous events and flagrant road rage. You start off in the quiet town of Gouda, but as you progress, traffic control job offers soon start pouring in from iconic cities around the globe.

Rude pedestrians, impatient drivers, and the occasional meteorite will be yours to control before road rage strikes. Yes, you read that right; meteorites! But those aren’t the only hazards; This chaotic VR game is full of monsters, (un)natural disasters, and something called… ‘cheese bowling’?

During the UploadVR Summer Showcase, we've announced couch party mode! Share the fun of VR with up to four friends (read: frenemies), locally, on mobile devices! Have a look at the multiplayer trailer featuring none other than VR content creators Cas & Chary! 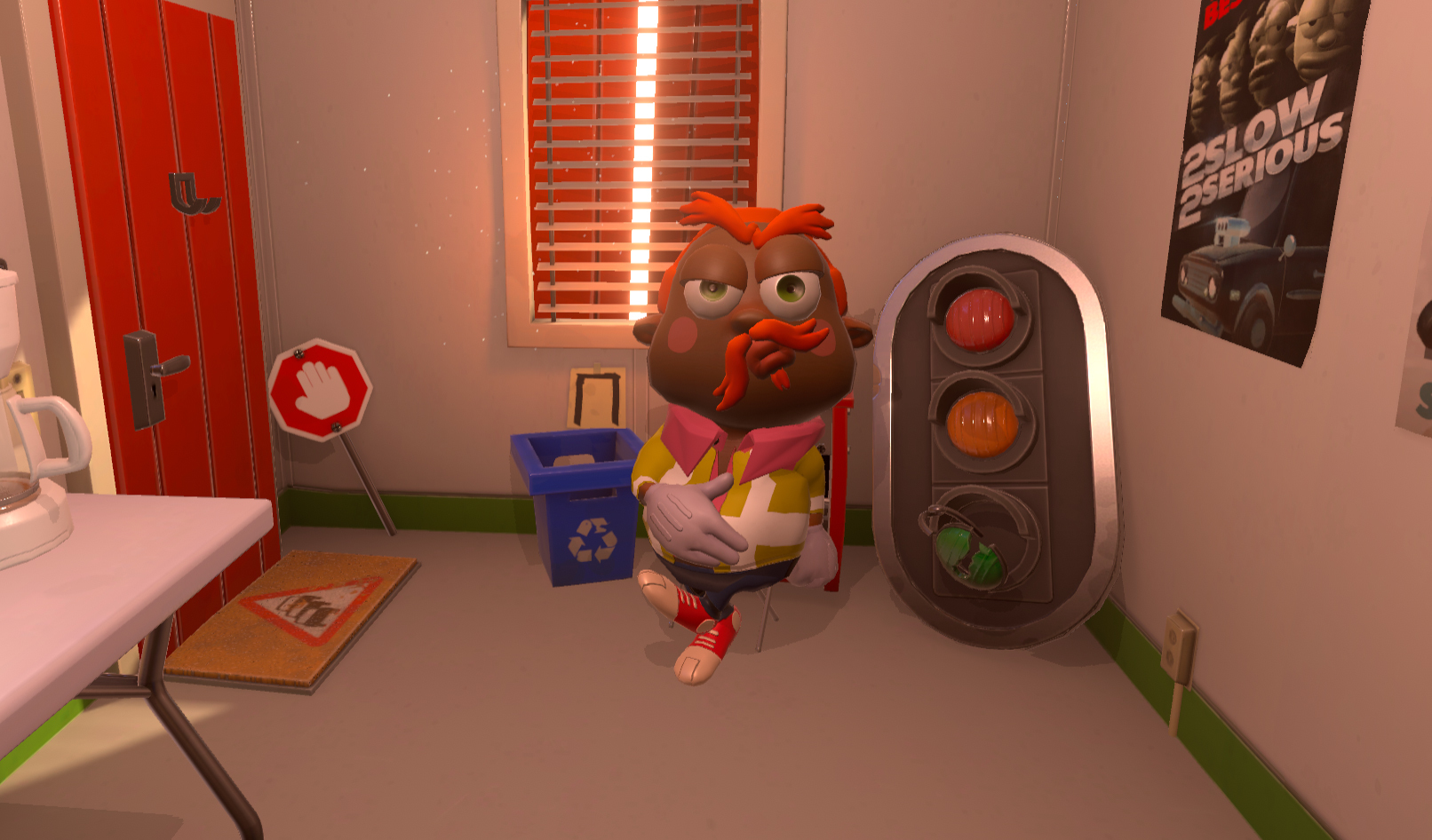 Dennis is your greatest frenemy, your rival, but most importantly, for better or for worse, your teacher. Hailing from Jam City, the self-proclaimed "best traffic controller...EVER", takes you under his wing. His experience comes from the many flash mobs and packed intersections that his hometown is known for. Armed with dreams of superstardom, a sassy attitude and fresh dance moves, he has taken it upon himself to teach YOU the ropes of traffic controlling.

If you give him a chance, (and the occasional dance), he'll take you on a jam-packed global adventure to become the Ultimate Traffic Showman.

This is only the first glimpse of the cities you’ll be handling in Traffic Jams, as there will be many different challenges, each with their own crazy events to face on this worldwide trip! We hope to see you on the crossroads for the full release; Traffic Jams will be available for Oculus Quest, PlayStation VR and all major PC VR platforms in September 2020.

For more news about Traffic Jams, find us on Facebook[facebook.com], Twitter and Instagram[instagram.com] to stay up to date on all things Traffic Jams, and sign up for the newsletter at trafficjams-vr.com 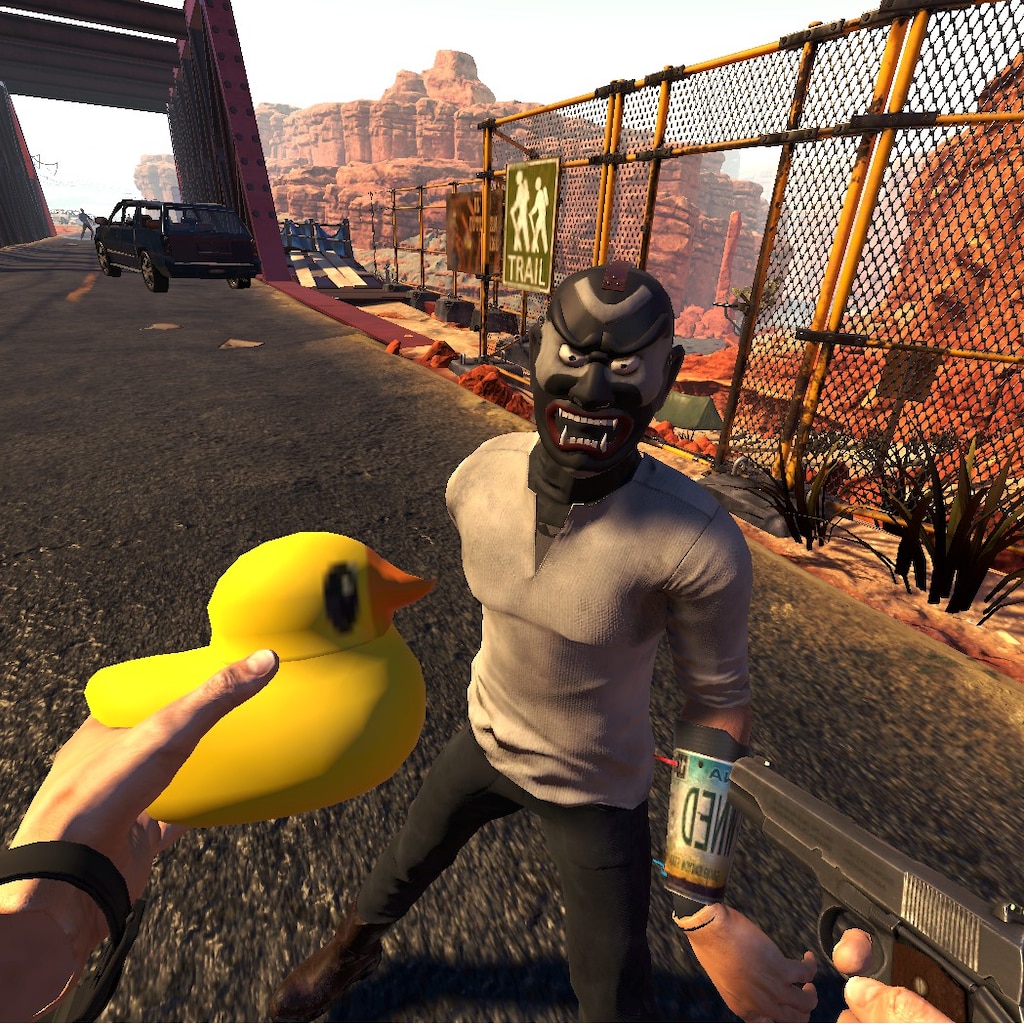 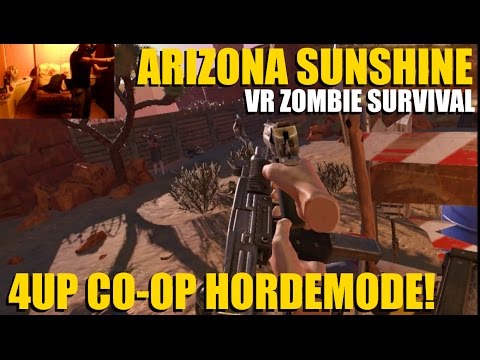 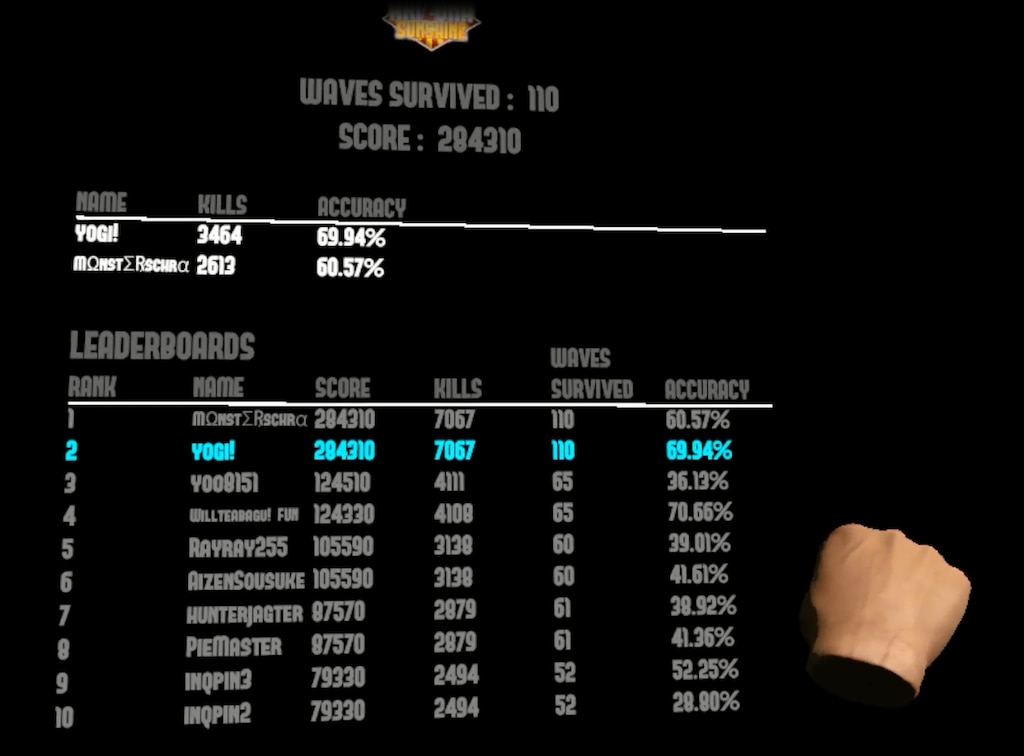 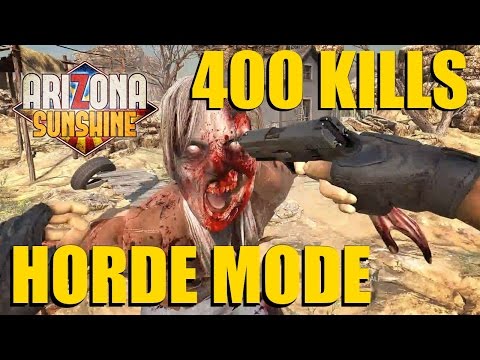 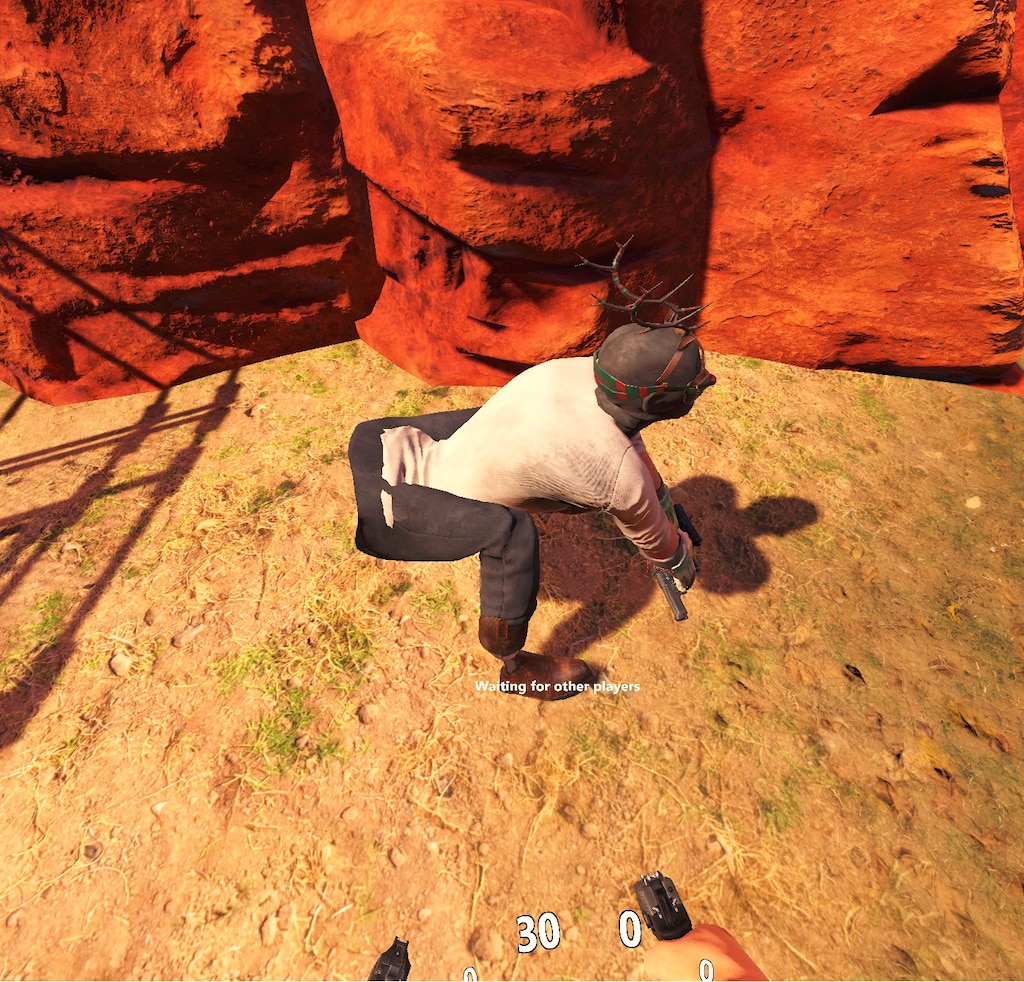 kenobi
View all guides
Zombies Invisible Through Rifle Scope
Same issue on 2 computers with 2 HMDs (Rift and Odyssey+). RX 580 for the Rift and GTX 1650 Super for the Odyssey+. Video drivers up to date. Zombies are invisible. Sometimes you can make out their outlines. Weird growths and helmets are rendered. In the stage with the trailer park, the nearby zombies are invisible while the very far off zombies can be seen and shot with the rifle. Submitted a support ticket with logs attached from one computer to Vertigo Games Support. I have a vague recollection ...
24 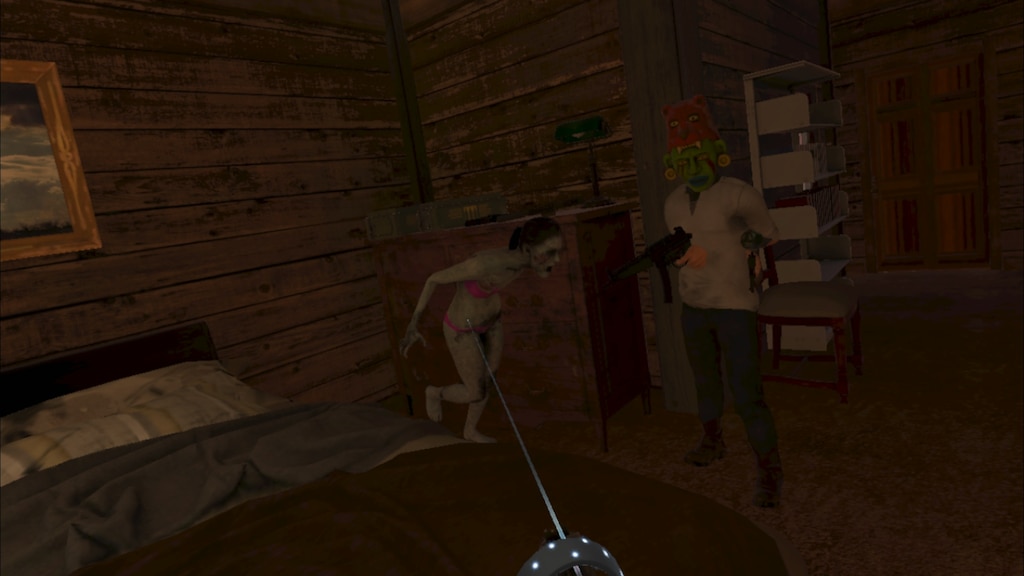 love_san
View artwork
Unable to buy Deluxe Edition - "Requires ownership of After the Fall"
Hi I was about to buy the Arizona Sunshine Deluxe Edition, but after choosing my payment method I receive the following error message and cannot complete my purchase: "Your transaction failed because you are trying to buy 'Arizona Sunshine' - Deluxe Upgrade' which requires ownership of 'After the Fall'. Please correct the error and try again." Surely a mistake on the publisher's end, considering After the Fall isn't even out yet, so I hope they notice and correct this during the current sale....
9 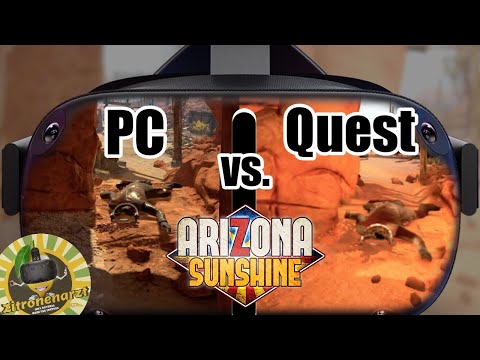 Not Recommended
1.5 hrs on record
This game is ridiculously overrated. Leave it to the Game Awards and everyone else who follows all the hype to steer you in the wrong direction.

For one, as soon as I started the game and went into the settings to adjust the graphics to High, it instantly froze and crashed my brand new high-end computer before even asking me if I wanted to "confirm" changing those settings (like pretty much every other game does).

So this was already off to a bad start right out the gate.

Also, in only an hour and a half of playtime:
-Ton of bugs.
-Poor game design.
-Overall lack of creativity.
-Very repetitive.
-Holes in the map, glitches, etc.
-Guns get stuck to your hands.
-Can't drop or actually "holster" weapons, only swap.
-Everything feels "sticky" and character feels laughably "weak."
-Can't throw grenades. Just kinda have to "oomph" them.
-If you like the style of combat of traditional Battleship or Chess you'll love this game. Move, stop, attack, move, stop, attack...
-Gameplay, settings, controls = All are SUPER restricted.
-If you think you're going to "prep" for an incoming horde and use that saloon you just came out of - think again. what stairs and doors you could use before suddenly become "roped off."
-Weapon control like changing mags and handling, grip etc. is totally backwards from every other shooter I've played in VR.

I could get behind the developers here if this game was early access but it's been out for 4 years... C'mon guys, seriously?

Doesn't reward creativity or "thinking-outside-the-box," only stifles it and funnels you in.

I get it. It's just supposed to be a simple, campy, corny 3D arcade style Z-shooter but I really think it was just meant for the more simple-minded and easy to please.

Great choice of game for a 10 year old after he's finished his homework and has 15 mind-numbing minutes to spare.

SUPER overrated, there's better out there. Had I known I wouldn't have even paid the discounted price of 15 bucks for it. 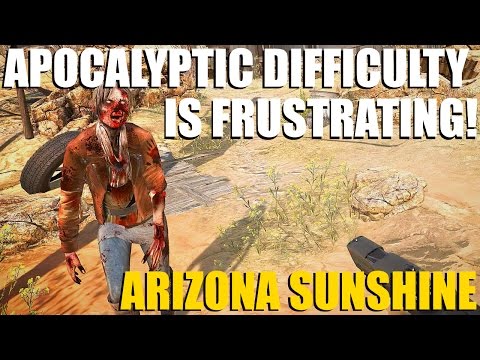 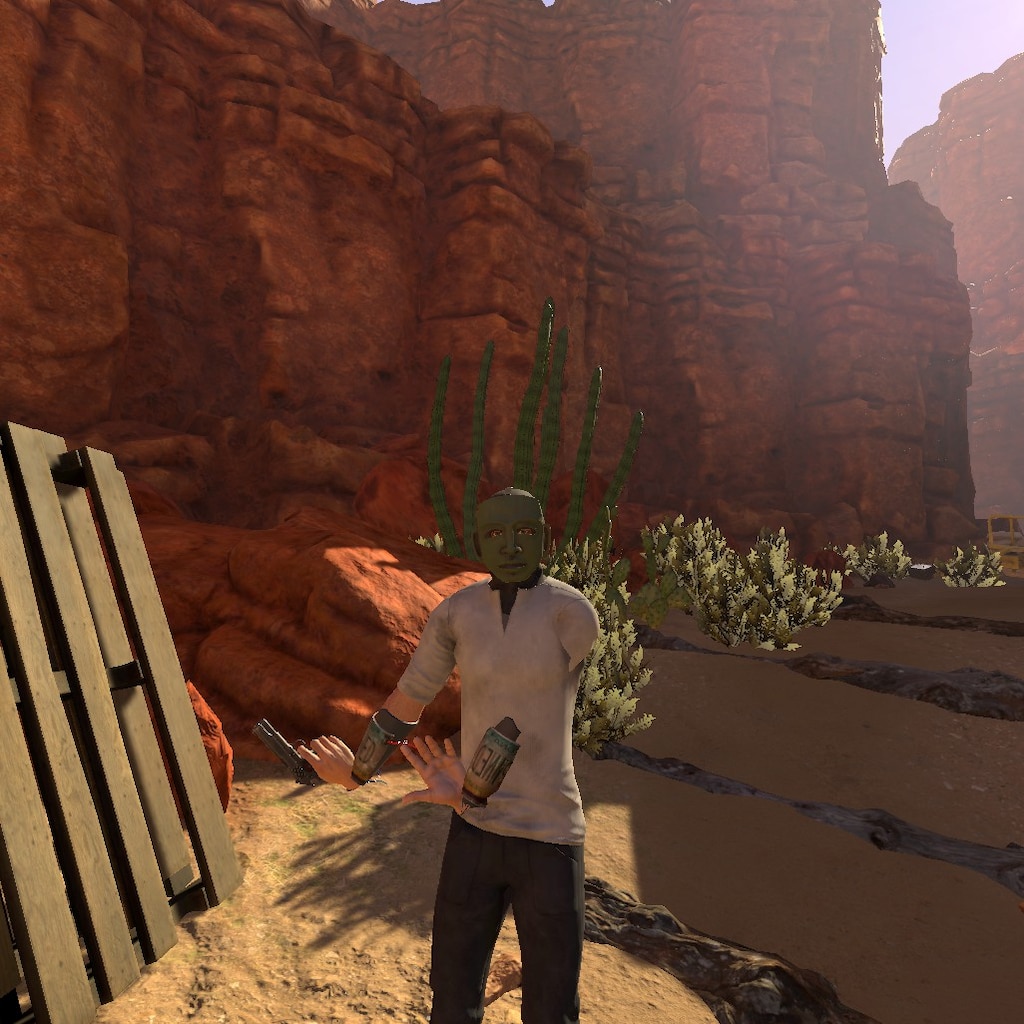 Not Recommended
0.8 hrs on record
This game was one of the main drawing points to vr back in 2016 but having actually played it now 4 years later, it doesn't really live up to what I expected, with all the other games out now. 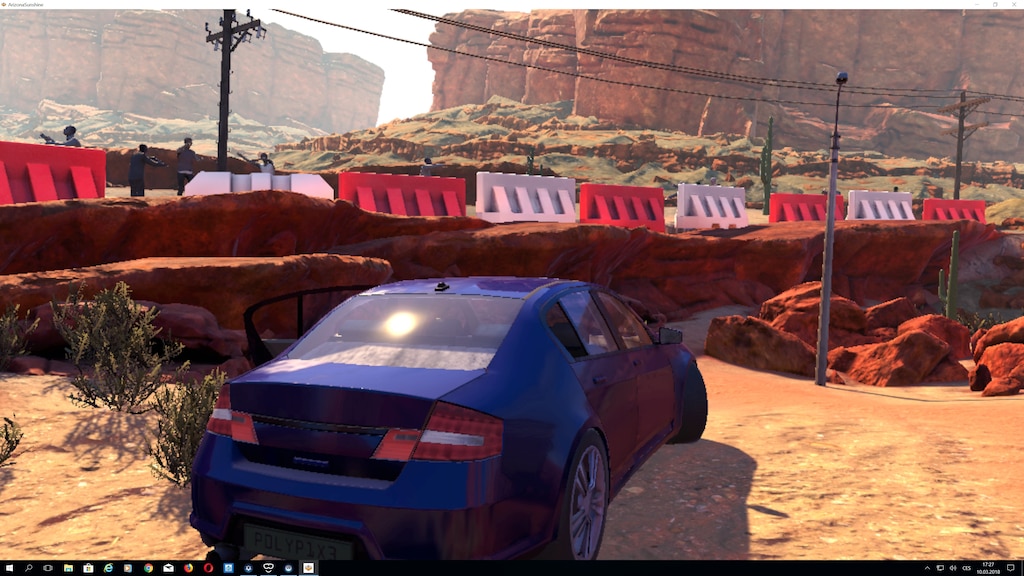 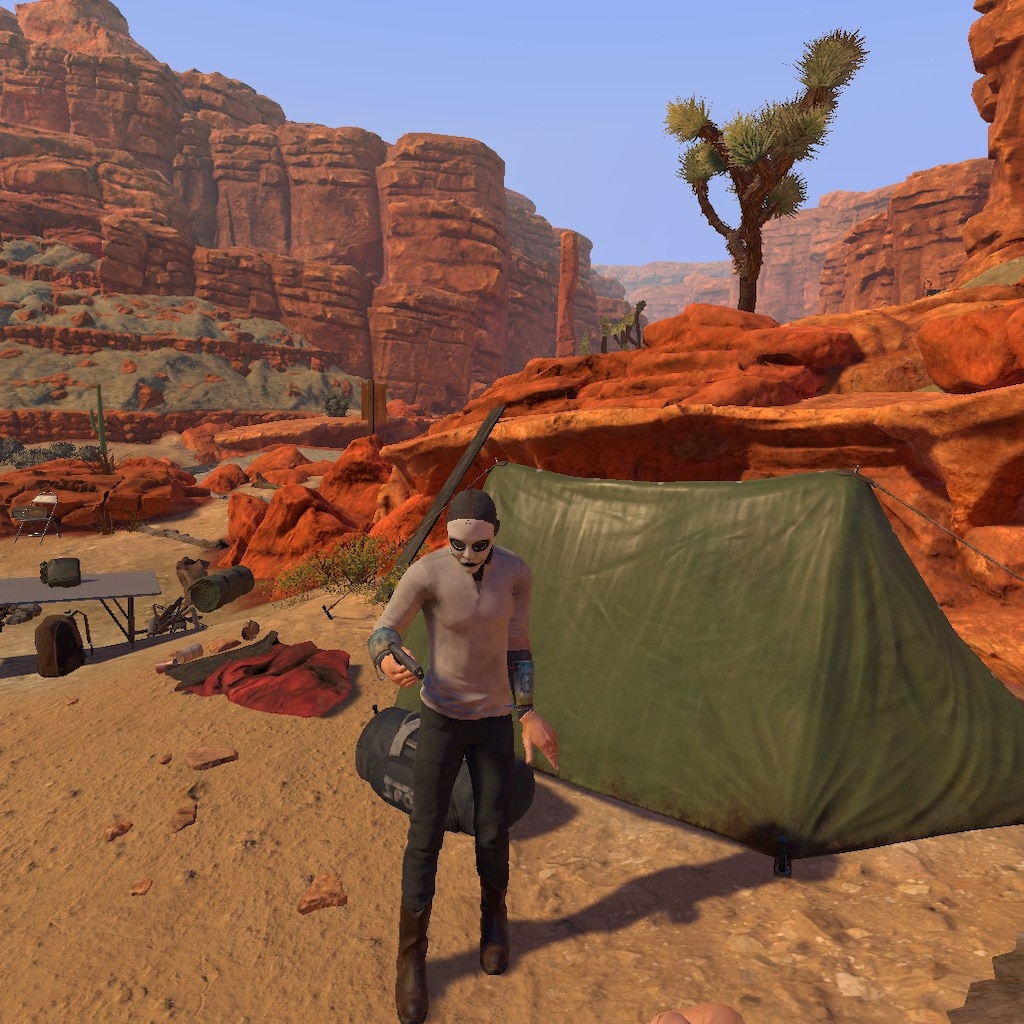 That means the original VR zombie shooter and all DLC released to date - Dead Man DLC and The Damned DLC - together forming the full Arizona Sunshine story, as well as some additional special extras for the yet to be released post-apocalyptic VR game After the Fall. 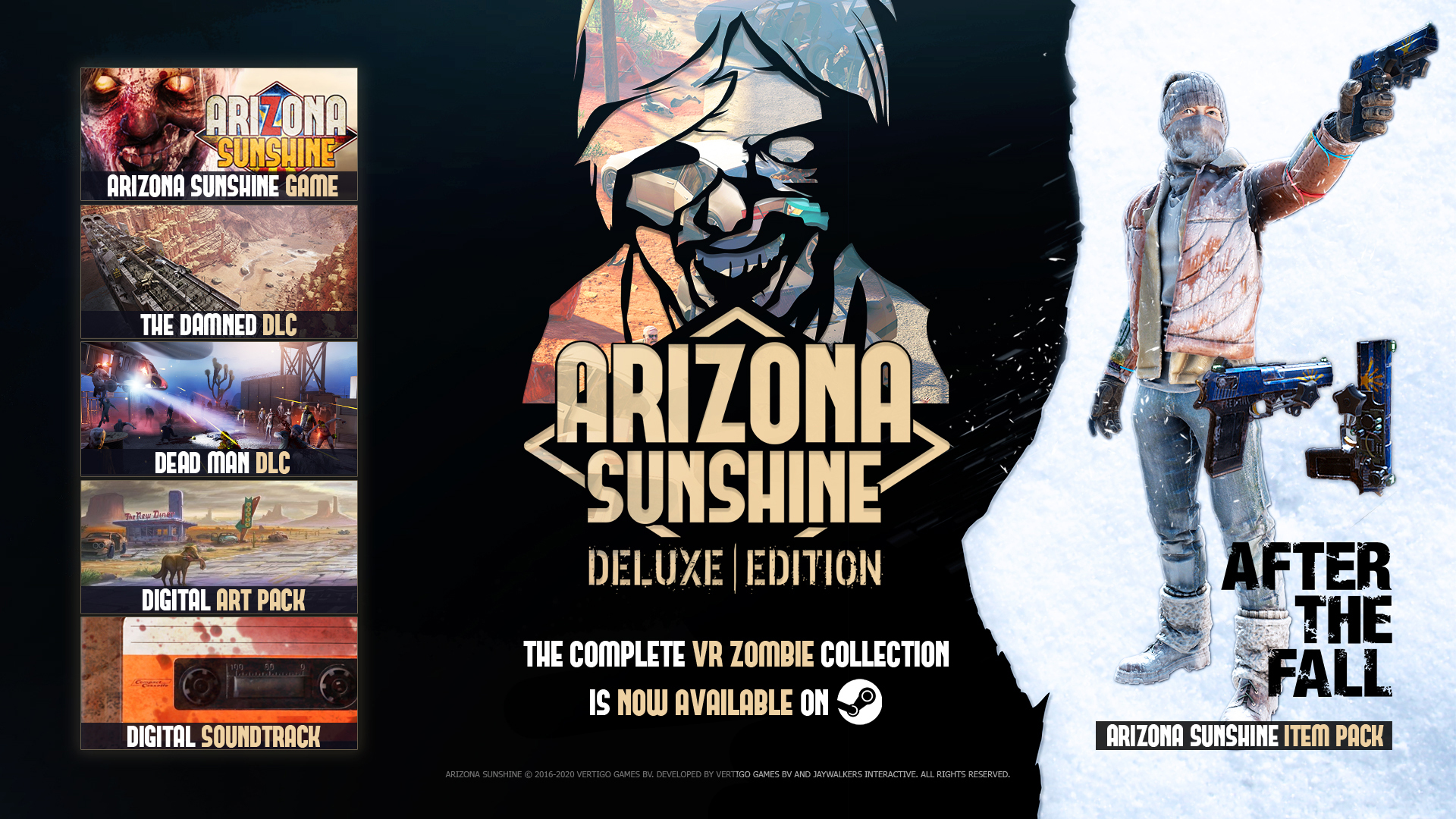 The Deluxe Edition loot includes:
And by the way, that right there is a little hint at the customization possible in After The Fall and we’re eager to show you more in the future! In the meantime, there are plenty of hordes to take care of in Arizona Sunshine, and if you are looking for fellow survivors there’s always someone to team up with on our Discord[discordapp.com] channel.

Stay safe and watch your ammo!