ADOM (Ancient Domains Of Mystery) is one of the most successful roguelike games ever created, boasting a brilliant mix of story, RPG, exploration, and intensely strategic and flexible combat.
$14.99
Visit the Store Page
Most popular community and official content for the past week.  (?)
Get the classic ADOM during Assemble's Gamescom Sale!
Aug 25
Adventurers!
Assemble Entertainment's Gamescom Sale is upon us!
Perfectly fitting of Gamescom 2021 kicking off today, Assemble Entertainment’s Gamescom Sale on Steam has started!
Giving you the unique opportunity of getting great games with discounts up to 90% off!

Get ADOM (Ancient Domains of Mystery) for magical 35% off!
https://store.steampowered.com/app/333300/ADOM_Ancient_Domains_Of_Mystery/

But this is just the beginning!
Get a lot of great games from Assemble Entertainment on huge discounts with up to 90% off!

Find all of Assemble Entertainment's games currently on sale here:
https://store.steampowered.com/publisher/AssembleEntertainment/#browse
Simply click the tab 'discounts' to see all games on sale! 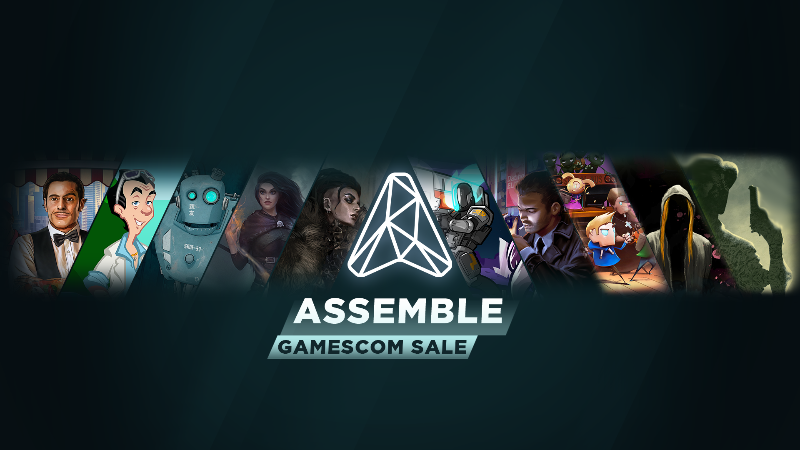 ADOM (Ancient Domains Of Mystery)
22
0
Achievements not working.
I have reached a few milestones for the steam achievements but I have not unlocked any of them, is there a reason for that? maybe some options I have to change or a specific game mode I have to play?
2

Etheer
Sep 17 @ 1:10am
General Discussions
ADOM or ToME?
Both ADOM and Tales of Maj'Eyal look like super awesome roguelike RPGs but I dunno which one I should get. They both remind me so much of D&D
17 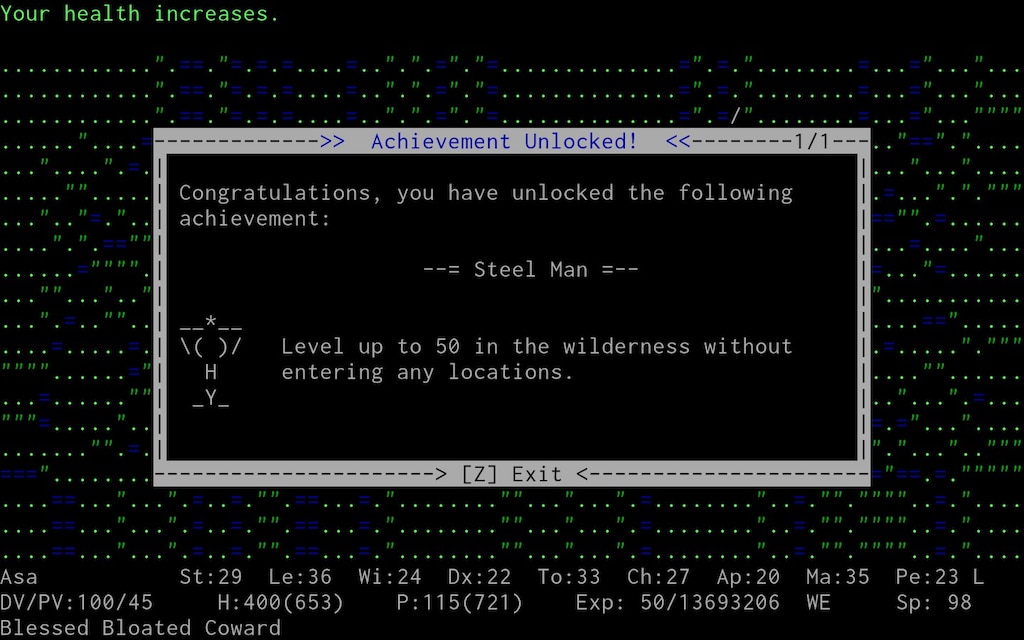 1
28
Yeah, I don't think I'll be touching ADOM again for a good while 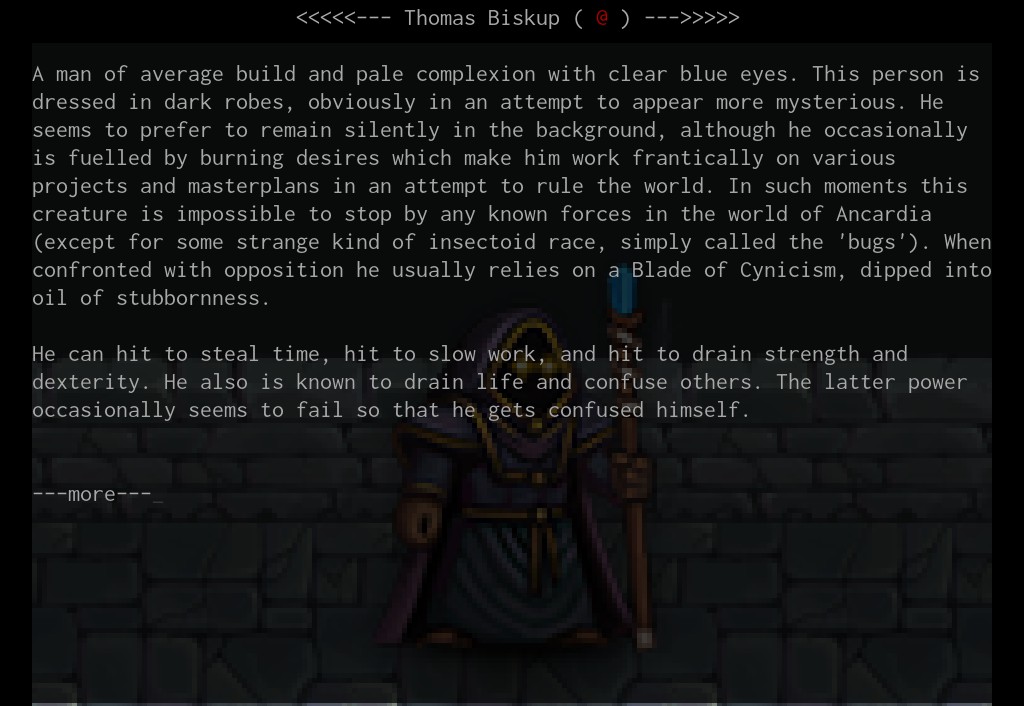 Early-Game Quests and Locations
Where to go, what to do, and who to talk to, from the beginning of the game to the start of the main dungeon.
65 ratings 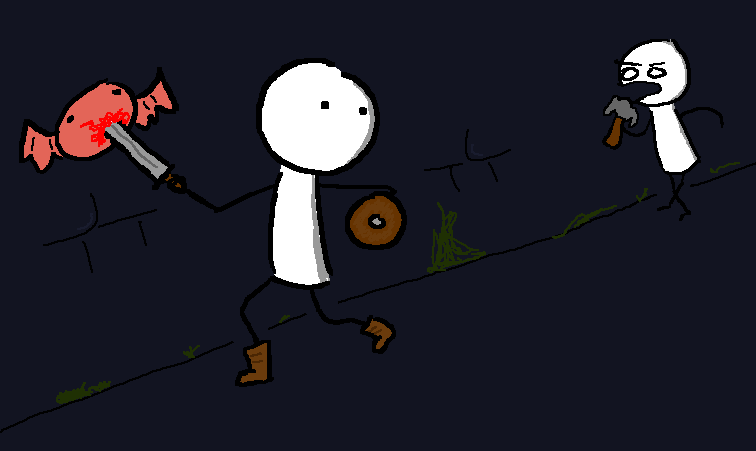 Attributes & Point Buy
Details on attributes, training, potentials, and how these inform your decisions with point buy.
53 ratings 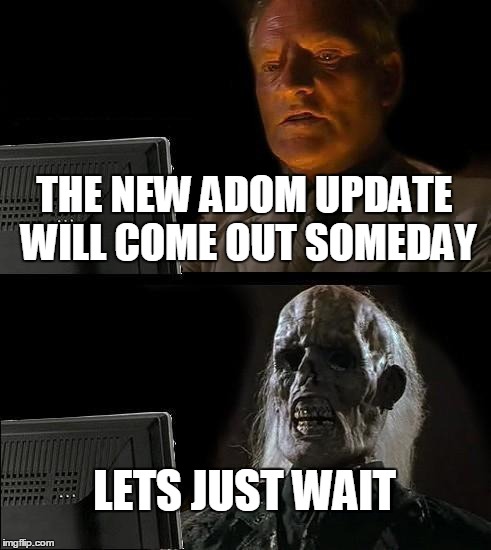 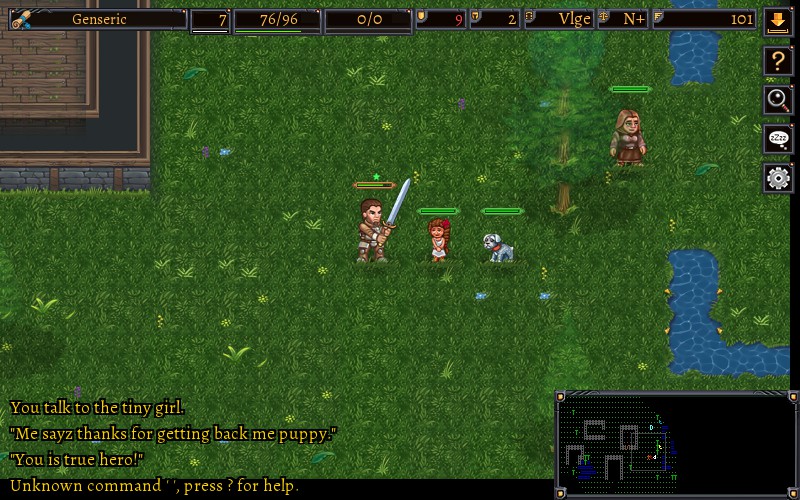 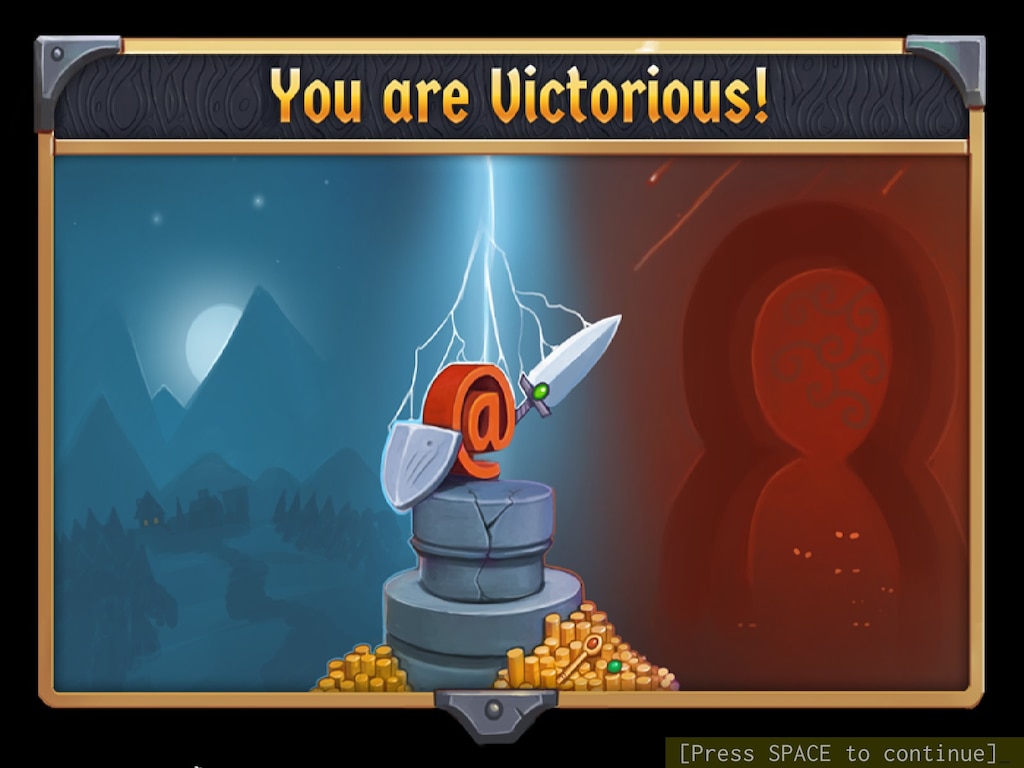 How to not replay the first 30 minutes 50 times.
How to not keep replaying the same content. Simple effective early character build, what to do in what order, how to identify effective equipment, and list of early game character killers.
39 ratings

Kolwyn
View all guides
Uncursed item was actually cursed
Seriously wth? I dropped a pair of gauntlets on a friendly altar and they came up uncursed so I tried them on and *bang* cursed gauntlets of peace.
3

Silverblade
Sep 12 @ 8:16am
General Discussions
Going troll or orc and just evaporating enemies with your pecks alone is pretty fun
You know when you finally defeat a hard boss and then you unlock them to play as, but they are suddenly super weak when you play as them? Well starting as a troll or a orc feels like the opposite of that.

(And i don't even have to unlock them)

You don't even have to be the bad guy playing as a troll or a orc since you can just change your alignment by doing good deeds, (or sacrificing hundreds of thousand of your own brethren, or rocks if you are a tr...
4 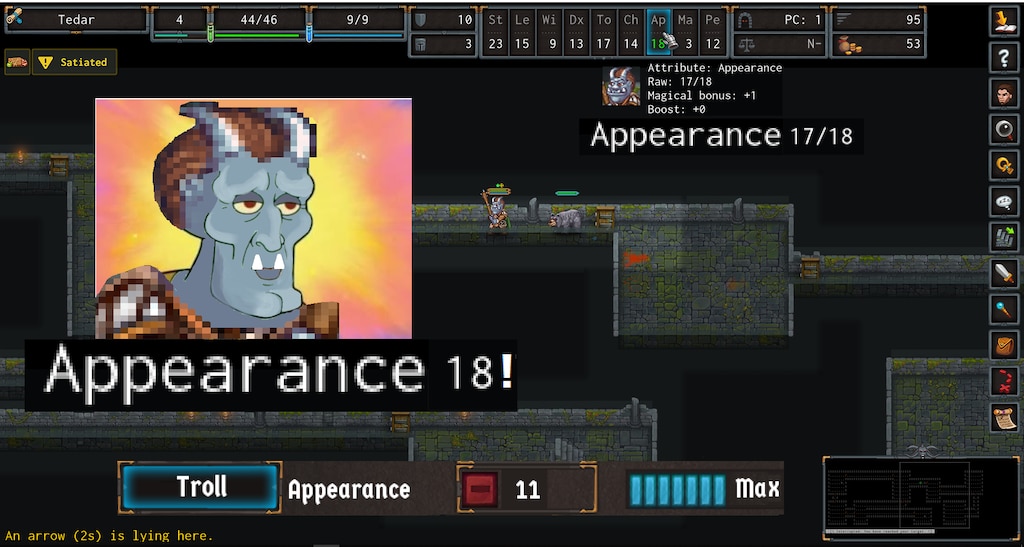 0
1
The world's most handsome troll

ADOM, Monks, and You.
This guide is a work in progress. New sections will be added as I (hopefully) complete my current game as an Orcish Monk. This guide is not for profit and any videos present are not monetized.

Greg
View all guides
Ultimate ADOM is now fully released on Steam along with Massive Content Update!
Aug 25
Together with developer Team ADOM we are excited to announce that Ultimate ADOM - Caverns of Chaos — the classic-meets-modern hardcore roguelike — is available today for Windows PC, Mac, and Linux via Steam.
And that’s not all!
The title also today receives the “​Update of the Living Dead”, which includes a brand new class — the Necromancer — along with three new magical skill trees, for a total of 68 new skills, 19 new spells, and more than 20 new monsters to slay!

Exclusive 30% off Launch-Discount
Get Ultimate ADOM now and get an exclusive 30% off launch-discount on both the Standard- and Save The World Edition:
https://store.steampowered.com/app/1266820/Ultimate_ADOM__Caverns_of_Chaos/

Overview features of the 'Update of the Living Dead':
"You have my sword." -Adventurer "And you have my Bow" -Archer "And my Axe" -Fighter "And your (un)dead fellow fighting alongside you!" -Necromancer 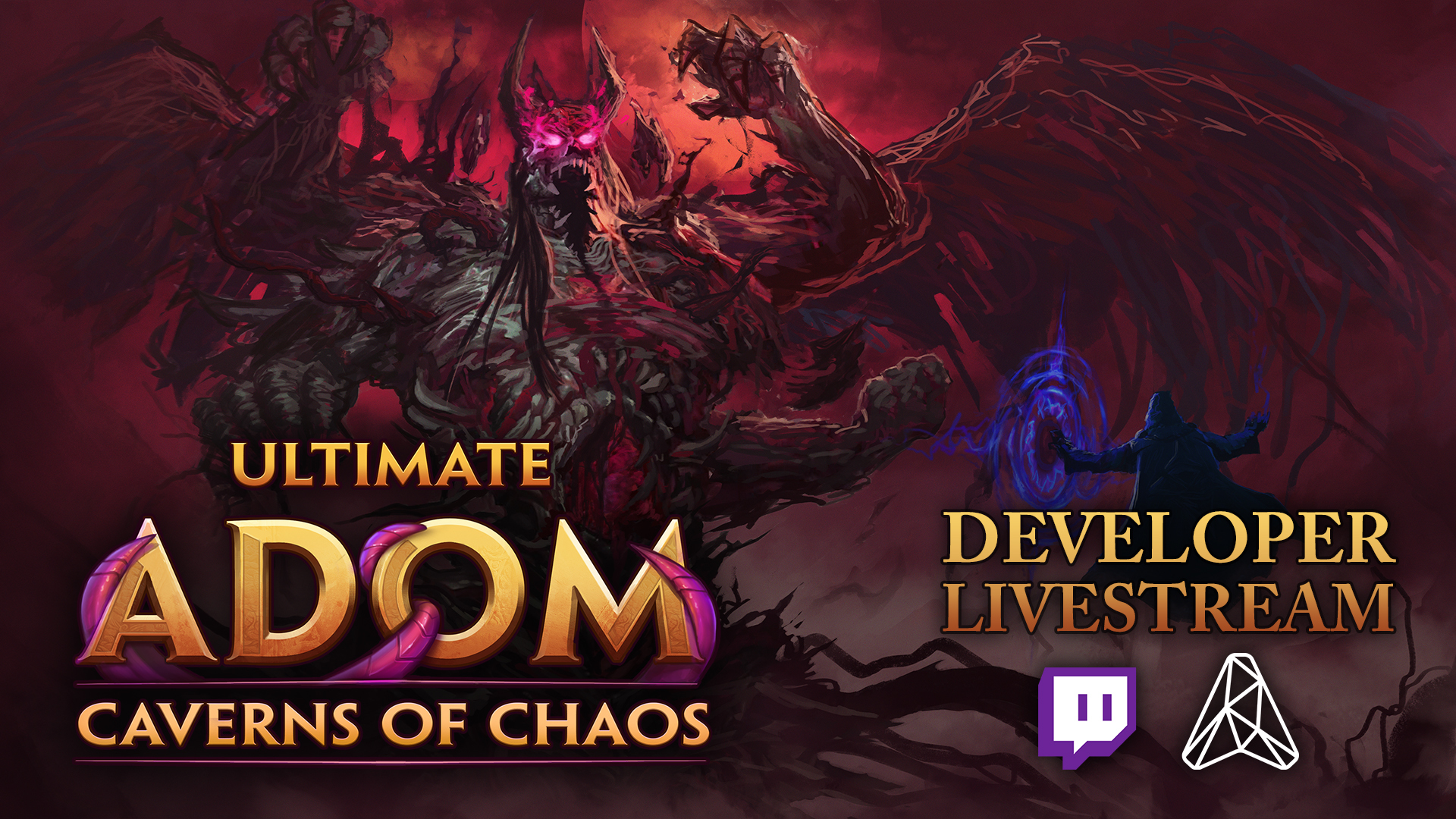 [www.twitch.tv]To celebrate the full release of Ultimate ADOM, Assemble's Uwe will livestream the full release version, giving you a glimpse of what the game looks like and the new Necromancer class!
Tune in starting at 2pm CEST/5am PT/8am ET on:

About Ultimate ADOM
A sequel 25 years in the making, Ultimate ADOM takes everything players love about traditional roguelikes — procedurally generated levels, random encounters, tons of skills, and a ridiculous amount of build varieties and play styles — and adds in modern sensibilities like multiple graphics options, intuitive controls, and a slick presentation.

Since the events of the first game, the big bad known as Andor Drakon has been seemingly vanquished and Ancardia is still struggling with the cataclysmic aftermath of Andor’s defeat. Unfortunately, power abhors a vacuum, and seven factions are now scrambling to be the new top dog. While they bicker with each other, however, a new evil begins to stir below the surface. It’s up to you to head down into the aptly named Caverns of Chaos to investigate these ominous rumblings and keep things from getting out of hand. Dust off your spellbook, grab your favorite cloak, and maybe graft a new arm to your body so you can hold another weapon — you’re going to need it.

Key Features of Ultimate ADOM Include:
Ultimate ADOM - Caverns of Chaos is now available on Windows PC, Mac, and Linux via Steam.
The game is currently available in English, German, French, Russian, and Simplified Chinese. For more on the game and the development progress, visit the official site at https://www.ultimate-adom.com

Assemble Entertainment is also offering a “Save the World” Edition for Ultimate ADOM - Caverns of Chaos that contains bonus wallpapers and the original soundtrack!
In keeping with the game’s theme of battling corruption, for every “Save the World Edition" sold, Assemble will donate 10% of the proceeds to the International Agency for Research on Cancer (IARC).

Join us in the battle against cancer and contribute your share to save the world! 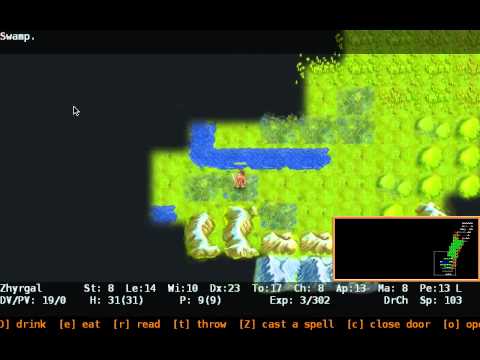 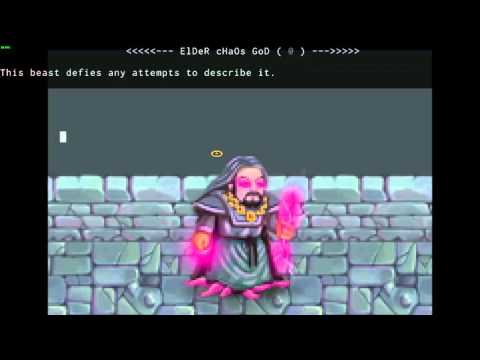 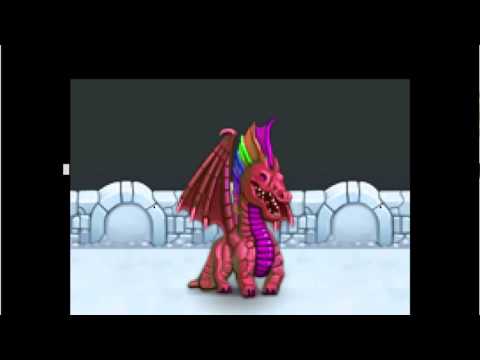 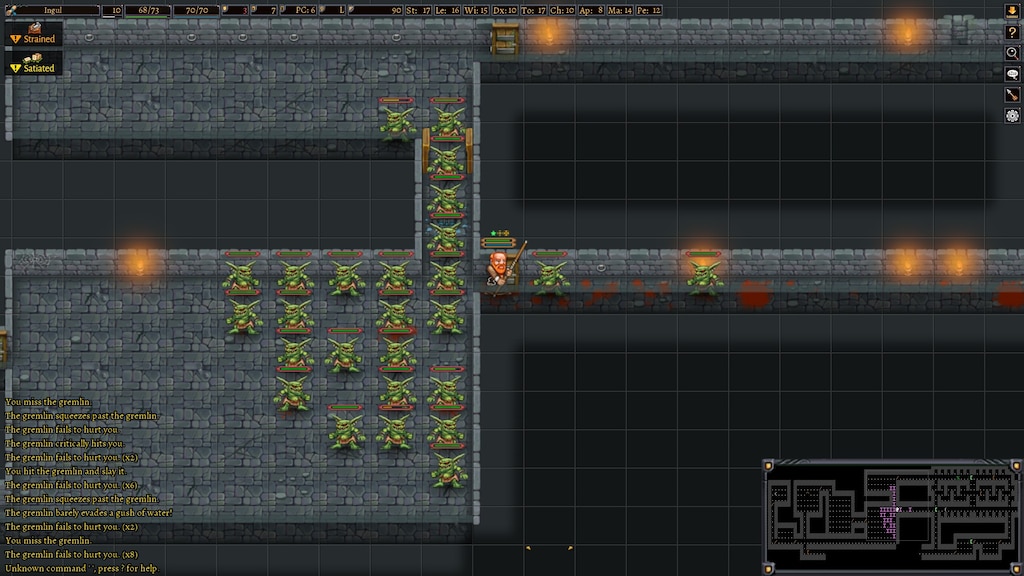 0
2
Gremlins stepping on a water trap and multiplying, its like in that movie hurr hurr. :D 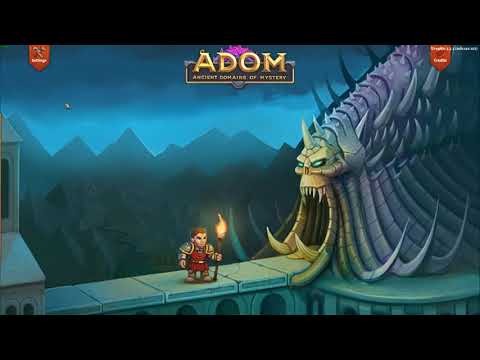 0
0
ADOM: How to play in First Person Perspective!

Recommended
2.6 hrs on record
Simply the oldest Rougelike sitll alive and in development! Awesome gameplay and decent story with multiple endings. Endless replayability with dozens of classes and races.

Overall hundreds of hours of fun! If you enjoy roguelikes you should already know this title if not - you should rush towards it immediately

excal
246 products in account
0
Morgia roots does not give anything?
I have dwarf paladin 13 level. Stats: Strength: 21/34 Willpower: 14/27 I have: 9 uncursed morgia toots 11 cursed morgia roots 4 blessed morgia roots When i will eat every root no strength or willpower increase - even by 1 point. How it should work? I need to wait for a effect or it is some kind of bug. Can even sent a savegame as archived before eating as in previous game had similar problems. Not sure if herbs even work for me. Please help :)...
5

Geralt
Sep 2 @ 5:27am
General Discussions
No one has rated this review as helpful yet

Recommended
14.7 hrs on record
I'm absolutely terrible at this game, and I freakin love it. Plenty of variety in ways that I can die, new and unexpected ways to disappoint myself - it's almost like real life

Not Recommended
12.6 hrs on record
Combat is either mind-numbingly easy where everything dies in one click, or it's virtually impossible to kill something. I never found anything in between after playing for 5 hours. Also, one meal ration weighs as much as two entire orc corpses... what?