There is a world beyond ours. Beyond nations, justice, ethics. It never sleeps. It exists everywhere. And once you enter....there is no going back. Welcome to the World of Assassination. You are Agent 47, the world's ultimate assassin.
Visit the Store Page
Most popular community and official content for the past week.  (?)
In VR?
How do I play this in VR? I have Hitman 3. Can't figure out how to get this working in VR.
25

HITMAN™ Achievement Guide
an Steam Guide for unlocking every Achievement in the game HITMAN™ (2016) by IO Interactive. (Last Update 10.11.2018, dd,mm,yy) This Guide is finished and wont get any more updates. Thank You so much for all your feedback! My New Guide: [url=https://
760 ratings 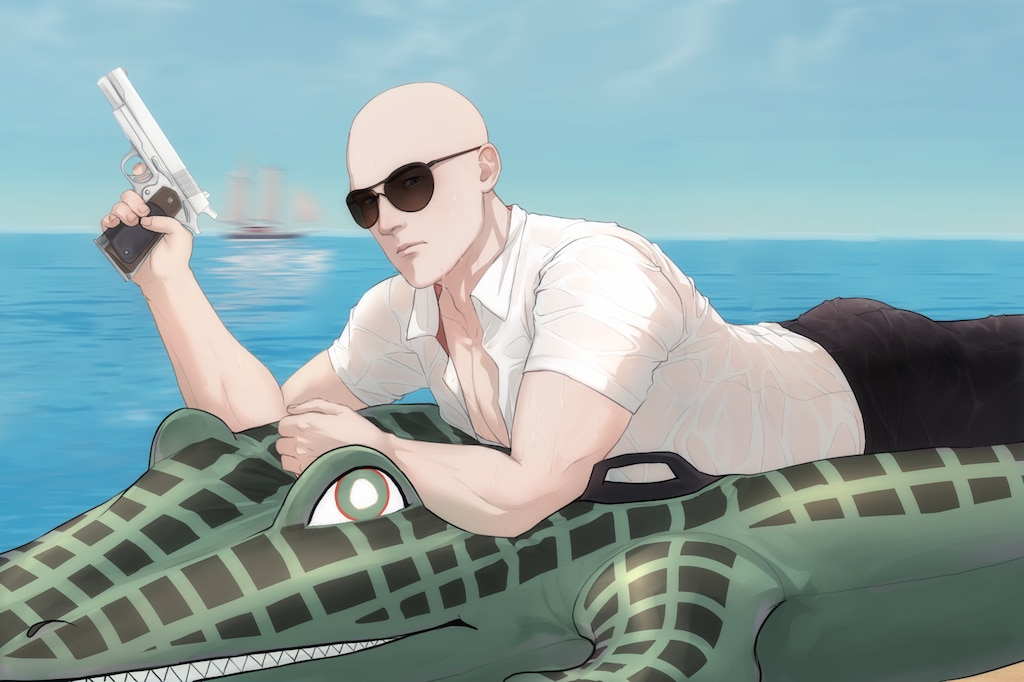 Inventory (Weapons and Gear)
A complete rundown of all weapons and gear.
183 ratings 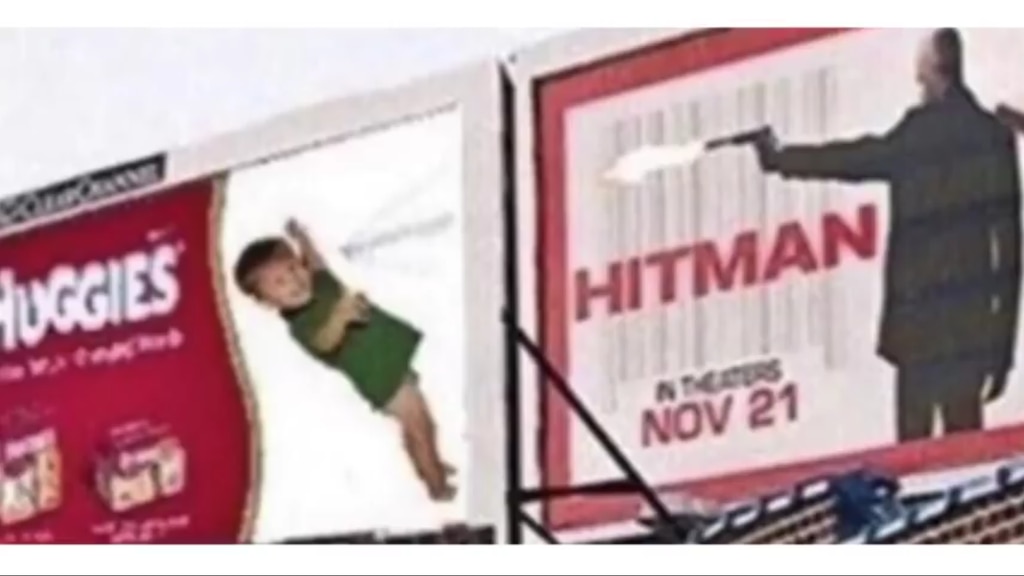 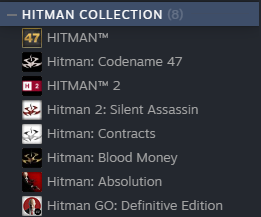 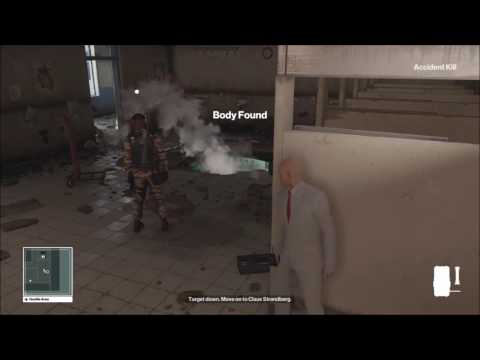 Paris SA/SASO guide written out of sheer anger due to there being no good written guides for this game
There are no ♥♥♥♥♥♥♥ good written guides on this game, I mean this probably isn't gonna be good either but I'll ♥♥♥♥♥♥ try. The sole reason I created this was because I couldn't find a good one. Also, I'll be updating this as I learn more methods and ♥♥♥♥....
129 ratings 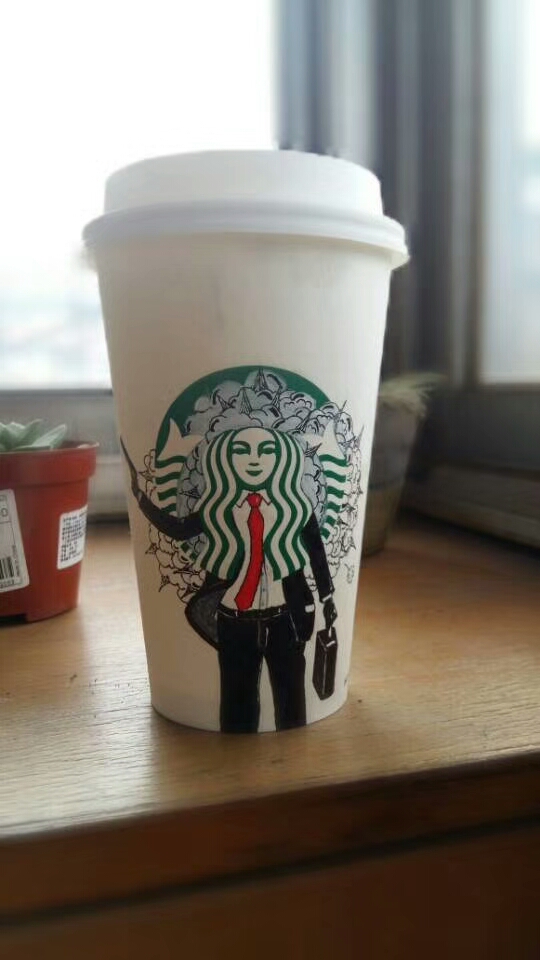 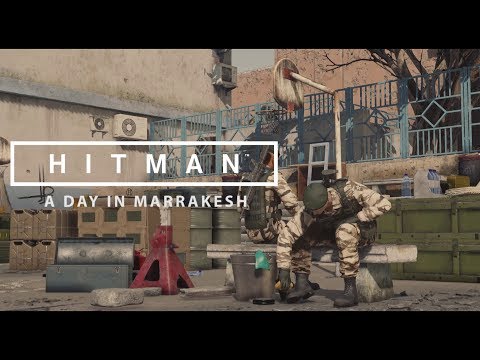 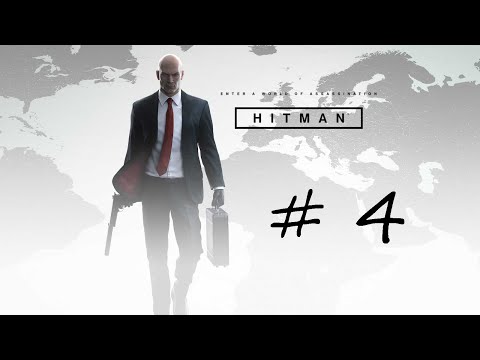 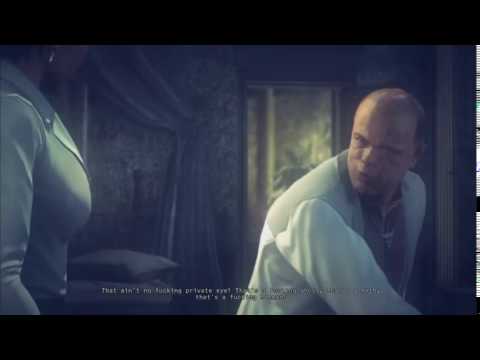 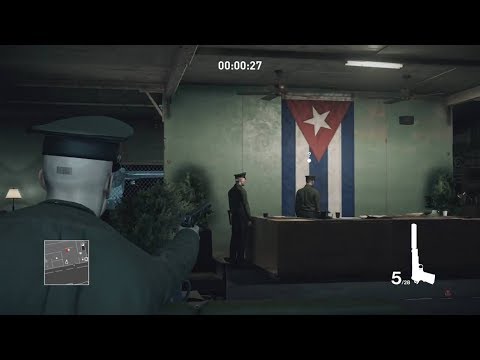 Not Recommended
18.1 hrs on record
Fun game until the server goes down, like right now. Turns out in offline mode half the content is disabled. You can't even do challenges or progress in your masteries. You can't progress in this singleplayer game when the server goes down or you have no internet. I will never understand why game developers make insane decisions like this. 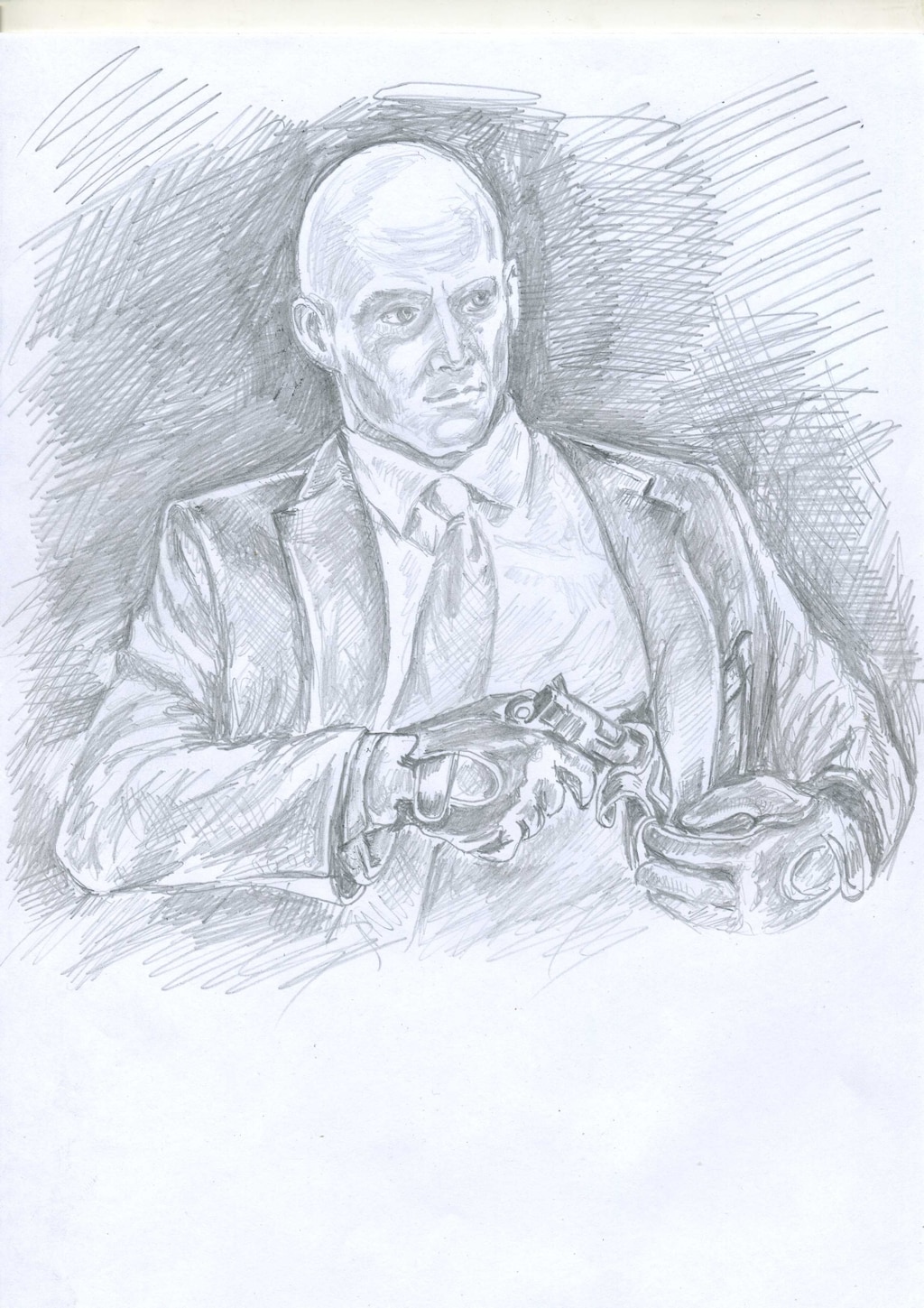 Recommended
0.5 hrs on record
Purchased this for Hitman 3 VR.
Only wish more game developers would implement the sequels in the next chapter (next release of the title). 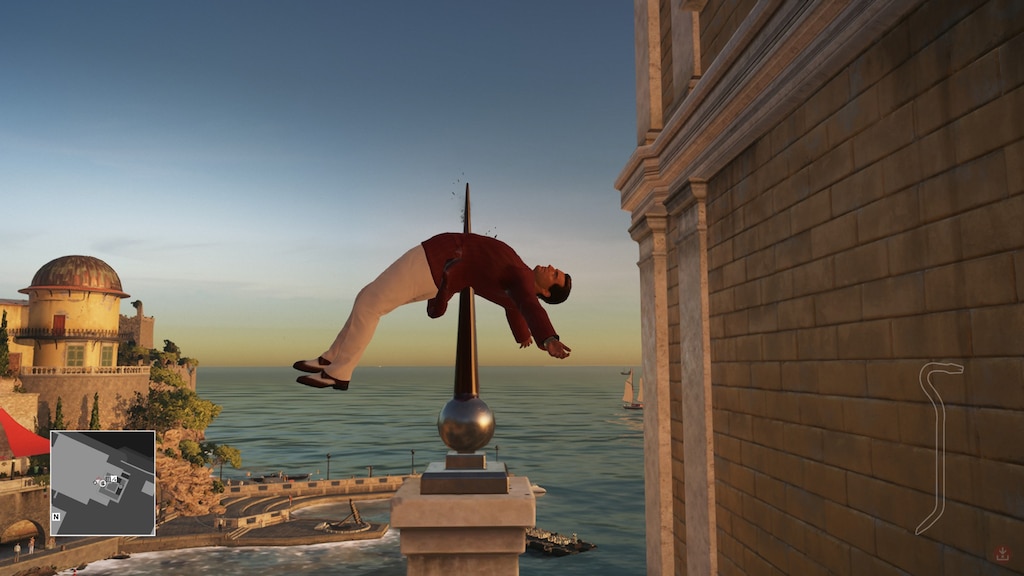 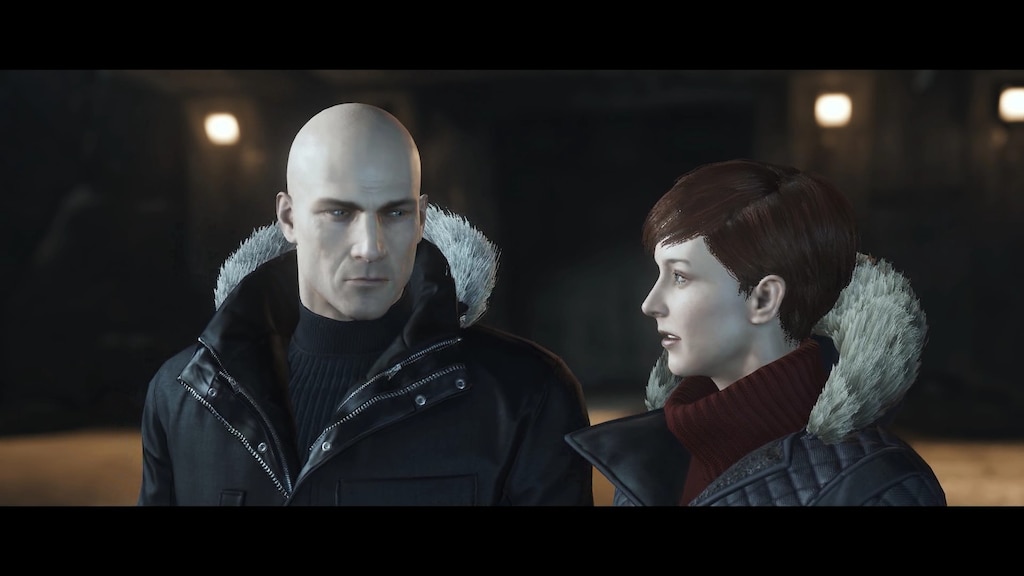 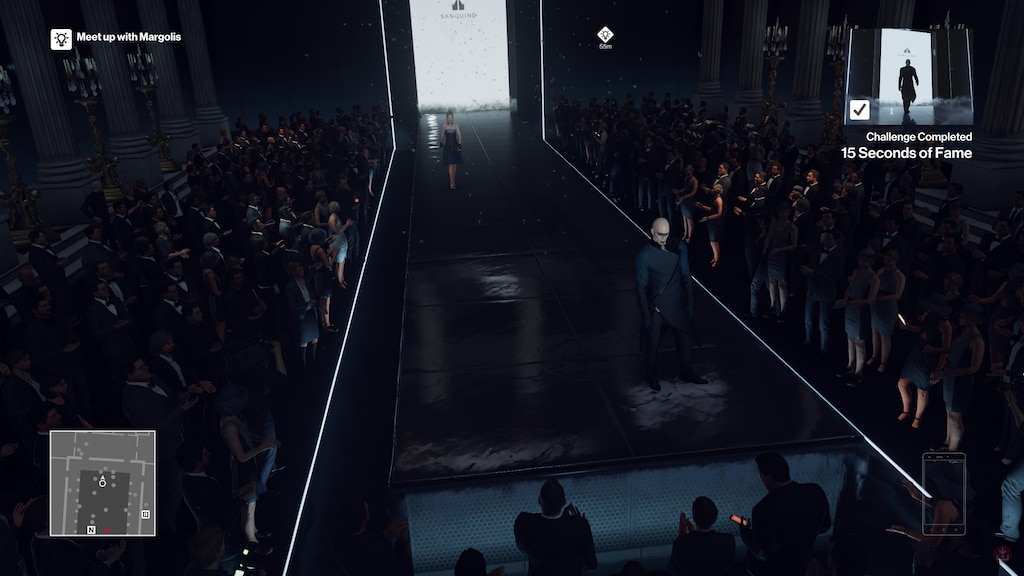 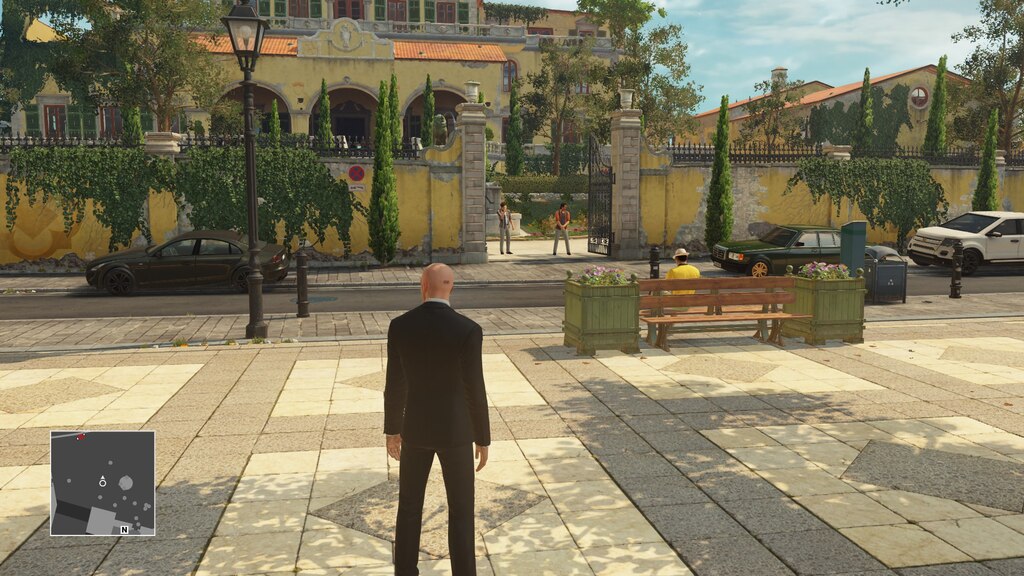 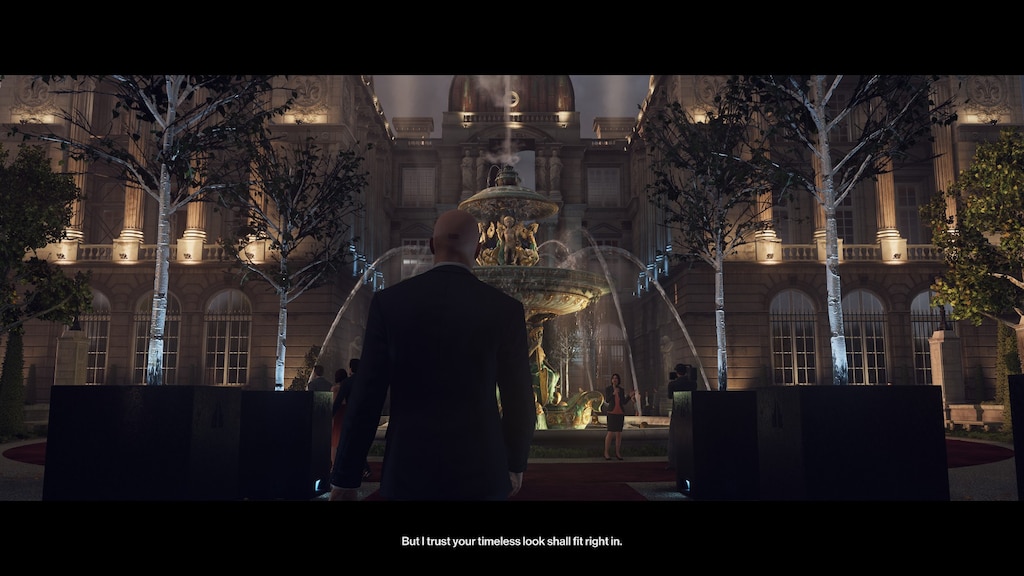 Not Recommended
0.3 hrs on record
I have enjoyed my time with Hitman, but I reccomend reconsidering a purchase, not because it is a bad game but because it has several notable flaws. The online DRM is nonense, this game is entirely single player. The online aspect is included only to discourage piracy. My internet connection basically never goes down, but Hitmans servers do, sometimes at the worst of times or for no reason at all.

When this happens all progress is lost, and the game kicks me out. This is a single player game, they're ruining the experince in the hope some pirate will be forced to buy it. The game does have a solid autosave and manual save system which helps, but I still don't like this.

Gameplay wise, the game is great, it's a return to the open ended style of the older Pre-absolution games.. Blood money namely, where there is a focus on non-linear creative assasinations.

Pros:Graphics are good, not ground breaking but they work.
Enviroments are well designed,very detailed and "lived in" and the amount of NPCs in some of the levels is very impressive.

Each level has many many ways to solve it, and there's always a way to get out of trouble if you haven't ♥♥♥♥♥♥ yourself into truly unrecoverble situations. The ways vary from straight up murder with a sniper rifle, pistol or any number of direct assault methods, to more elebatorate accidents. Among other things. Unlike Absolution you will die if you try and shoot your way out, gun fights are dangerous.

The AI is, accetable. They will work together and are fairly observant compared to some stealth games, but as always they are easily defeatable when you learn the patterns.


Cons: The voice acting has almost zero vartiation. The Asian guards in Thailand sound like some Marines from America. This is a small thing, but for some reason it is noticable to me because of the detail of the enviroemtns, it sticks out as odd. They could do with some accents and variation.

Online DRM, it is useless, locks you out of content if you happen to want to play online and is a failure point for the game when the publishers decide to drop it. It is a terrible practice that needs to be shamed out of existence.

The game doesn't run very well. I have aging but still competent hardware and while it's accetable it runs fairly poorly with frequent frame dips. It is playable for me on near max settings, but it could be better, and the sheer amount of NPCs rendered makes up for that slightly.

The music is average, it just seems there to fill the silence, rather than to add to the game atmosphere for the most part. It's alright, generic. That's fairly subjective though.

I have enjoyed my time with the game, the gameplay is good, and unlike Absolution, it's a good Hitman game, but I don't suggest buying it for these reasons unless you're really commited to the Hitman franchise. If you do buy it, make sure to be ok with always online.

EDIT: This review has ♥♥♥♥♥♥ more attention than I anticpated, so I decided to add a little info about the DRM.

Hitmans DRM works by tying your progress to their online servers, you CAN play the game offline, but you can not continue a save that was made while online, and while offline you also lose access to all unlocks, and from what I understand but I'm not certain, you can unlock the items, but the online and offline saves will be treated seperatly.

In my opinion, while I love the game, this is unnecetable, this is blatant potentially intrusive DRM that is presented as a feature, and while the devs have done an excellent job with the game otherwise, whoever made that marketing decision made a mistake.

The only reason I don't reccomend this game is because of this DRM.

𝓢𝓾𝓹𝓻𝓮𝓶𝓮
149 products in account
6
Worth Playing Standalone?
I'm just wondering if I can play and enjoy the game by itself, or should I buy 3 and get the pass for 1. I understand how purchasing all the different versions work. I spent an hour reading that damn guide :) I just want to know If It runs and looks that much better in the upgraded engine....
4

MaxxGold
Jun 24 @ 8:17am
General Discussions
I only have one full copy of H2.
So lemme get one thing clear. A friend, gifted me a full copy of H2, for now I don't plan on getting H3 anytime soon, so I wanna start with H1, which I only have one mission of. Knowing these games are connected into one huge game per se, I don't really have a clue what to go with here. I read what I could from the Store Guide here, but I'm either missing something or there's no info on what to do if I only have H2 and wanna start with H1 which I don't have in full yet. Someone please fill ...
3

WuB
Jun 23 @ 3:51pm
General Discussions
Not all content available in Hitman for Mac?
Hi, why is the amount of content / levels in the Mac version of Hitman so limited compared to the PC? Seems unfair!
6

jure.jerebic
Jun 19 @ 9:15am
General Discussions
Really annoying bug. Missing exit.
I tried to get one of the more difficult challenges done: Silent Assassin, Suit only in Paris (Showstopper) but after I killed the second target (Viktor), the exits don't load. I tried to exit thought the front gate, I tried to exit through the catacombs, I even managed to get the key from the Sheik's room and went to the boat and also the damn chopper, but nothing. There is no option to leave the map. What the ♥♥♥♥♥♥♥ hell? How can such game breaking bugs still be in a 6 year old game?...
10