Realm of the Mad God Exalt

Team up with dozens of players and battle through the Realm of the Mad God, Oryx. With a retro 8-bit style, Realm is an evolution of traditional MMO gameplay.
Visit the Store Page
Most popular community and official content for the past week.  (?)
Patch notes 1.2.1.0.0
Nov 24 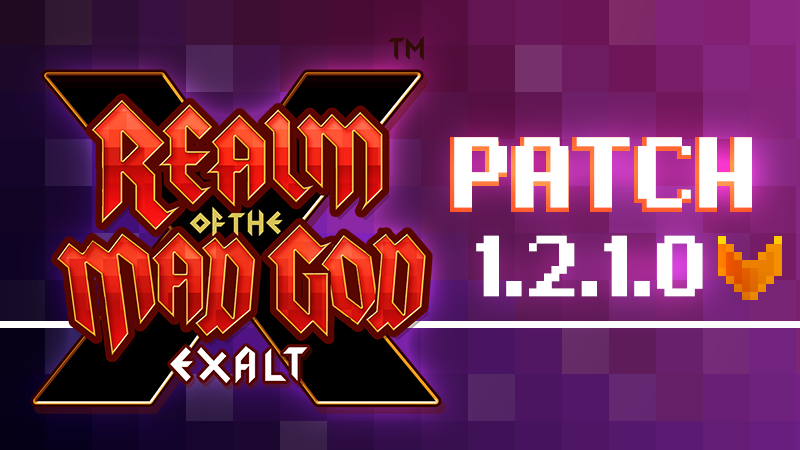 Today it’s all about fame, isn’t it? Well, we couldn’t agree more. The much anticipated Fame rework is finally here.

Fame reworked:
The fame system has been reworked with the goal of creating a system that rewards a character accordingly throughout its life, no matter what kind of playstyle you may have.

Stat Bonuses:
Abilities such as spells, shields and quivers should now properly increase the shots fired stats
The potions drunk stats will now properly increment no matter where you drink a potion
We’ve added the potion attribute to a lot more consumables as well, you can find a full list of all consumables that count as potions here. Keep in mind that it uses internal object ids.
Teleport stats is now only incremented via player teleportations. Prisms and other teleporting abilities no longer increment the counter.
Party Level Ups now are granted to any players who participated in the enemy’s death rather than only the one who lands the fatal shot.

Enemy Kill Bonuses
11 new enemy kill stats have been added on top of the existing ones (Cubes, Gods, Oryx):
Lesser Gods: Tough enemies that inhabits the highlands and enemies that are more powerful than the rest within dungeons
Those stats have been distributed across all killable enemies in the game! You can find here a full list of all of those, keep in mind that some enemies may appear listed twice (for example a Beast that is also a God)
Enemy kills are now distributed to people who participated rather than only the person who dealt the last hit.

Dungeon Bonuses:
Dungeons stats have been added to almost every dungeon in the game!
Keep in mind that your previous dungeon completion stats have been reset with this update.
We mentioned some bonuses that were being removed in the past. Check them at our previous blog post. Here is the full list of the bonuses from now on, including their rewards.

Agent of Oryx Equipment Update:
Rings:
Along with them, we are releasing Shard of the Advisor, which will stack up to 35 and turn into a random Agent of Oryx Ring upon consumption. Additionally, you can choose to save up 70 and turn them in for a Ring of Choice at the Tinkerer’s.

Similar to other event items, the rings gain power based on the amount of Agent of Oryx equipment you are wearing.

Realm of the Mad God Exalt
46
5
Immense lag after new update
Anyone else experience immense lag after the update? My frames are literally garbage... its not as smooth as before...
1 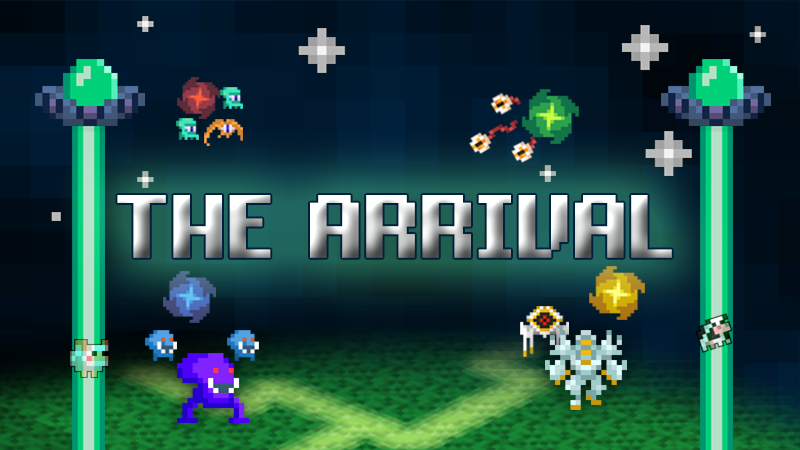 We were wondering: this has been such a peculiar year… what are we missing? Yes, you guessed correctly: Aliens! Aliens are arriving (only to the Realm, hopefully) this Thursday for a 10 day event with plenty of quests and lots of loot to grind. And this event has some peculiar oddities to it that you never seen before in an RotMG event before. You’ll only be able to get the full experience if you play throughout the whole event. As the days will be passing we will be unlocking new rewards in wormholes and rewards that, if combined, will give you the best loot.

Commander Calbrik, the acclaimed leader of his homeworld’s notorious army, is back and he’s trying to take the Realm for himself.

And do you know what’s also back? The Universal Fragments. Here’s how to get them:

Take a look at the quest table at our blog[remaster.realmofthemadgod.com].

And to add to this, there will be x2 XP in all wormholes throughout the whole event!

Enjoy!
And remember... the truth is out there.

Top 10 Tips
This guide will help newer players that are struggling keep their items, not die and get better at the game in no time!
442 ratings 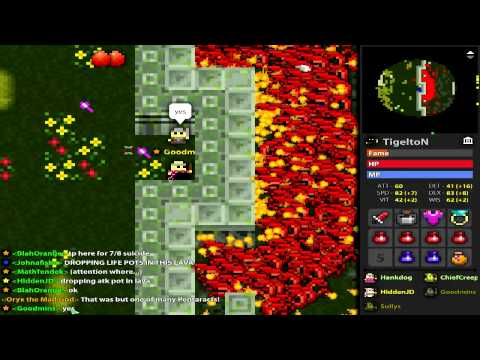 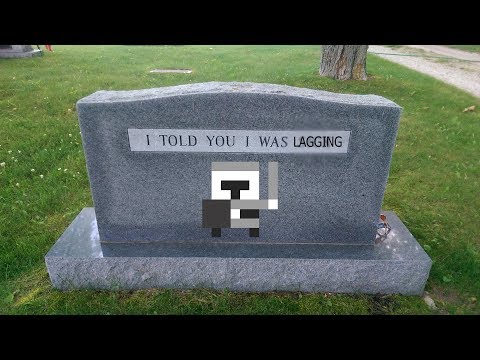 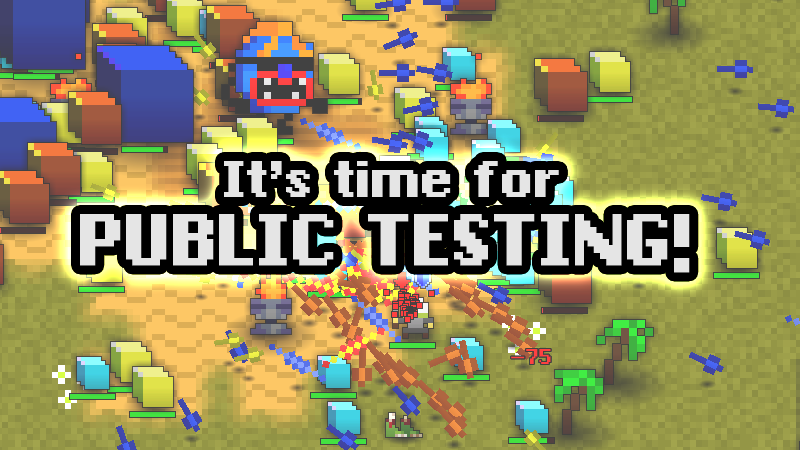 We’re excited to announce that a public testing session is beginning today and throughout the weekend! Please feel free to leave feedback on the thread on the RealmEye Forums![www.realmeye.com]

What’s up for Public Testing?
Fame Rework – The main purpose of this PT session is also the most hotly anticipated! We know you’ve been eager for this promised expansion of fame bonuses, and although it has taken some extra time to prepare, we’re now ready for mass testing!

Agents of Oryx – This is a two-parter! Not only will you get to try out the current versions of the Agents of Oryx accessories to complete the sets at last, but we have also taken the time to make numerous balance changes to the weapons, abilities, and armors to improve usability.

Transparency Improvements – No more black voids! With these changes, overlapping transparent sprites should no longer stack up their opacity and become hard to see through. 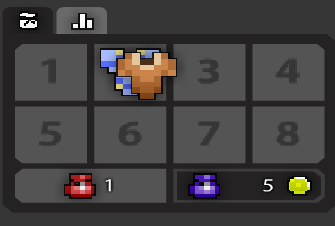 0
9
I hate it when this happens 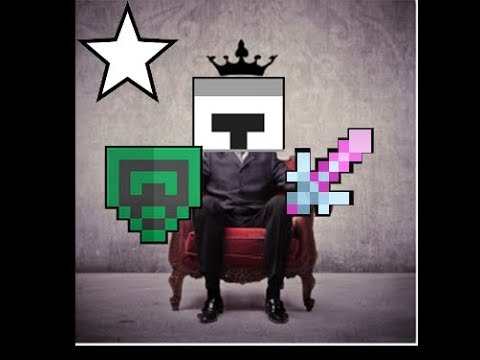 How control hero when you confused. (+ MINIGAME created by me)
Dont panic and no rage press tp Nexus, you can control it
78 ratings 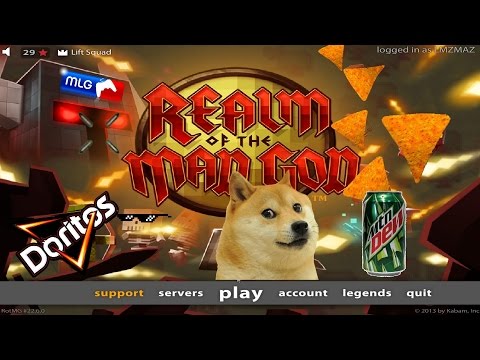 Recommended
30.8 hrs on record
I am only really making this review as most of the reviews on this game don't actually talk about this game, like at all. I have played Realm of the Mad God off and on for the past 6 years or so and I can say they improved a lot. I picked this game back up a few days ago after I saw it had a new update and I still love it.

Realm of the Mad God is best described as a rogue-like MMO. You start out at level one and fight your way through randomly generated worlds and dungeons, potentially with the help of whoever else happens to be playing at that time. When you die your character is permanently dead and you lose all the equipment on that character, forcing you to start from scratch. The more you play the more classes you unlock and the better items you can get and store in your vault for future characters. The level cap is 20, and after that your main goal is to fight the biggest baddies in the highest number to raise your fame which can be used to purchase some items in the shop and other upgrades.

This game does in fact have a pay-to-win system, however in all my time playing, I have never spent any money on this game and still had a lot of fun and even have gotten some really high-tier equipment.

Score Breakdown:
Graphics: 3/10, While I personally don't hate the graphics, I can tell you they suck.

Sound: 5/10, The soundtrack is simple with a few songs that can get annoying so I normally turn it down so I don'treally notice it, however the beginnings of some songs do give me nostalgia.

Gameplay: 7/10, While not excellent, it isn't bad by any means. I love the game and I get a bit annoyed at how tough some enemies are before remembering you are supposed to play this game in big groups when you get to level 20, not soloing the raid bosses. Other than that, it plays like your standard bullet-hell rogue-like what do you expect.

Story: Not really applicable, There is minor lore bits in dialogue but there doesn't seem to be any story or world building.

Difficulty: This game is brutally unforgiving and several times I find myself resorting to cheesing out bosses or enemies, there is definitely a steep learning curve and probably best experienced in a group of 4-6 friends.

I know this may seem like a low score breakdown but I am gonna give it a 6/10 overall. I can't quite put my finger on it, but there is something about this game that is just really good. And hey it is free, why not give it a try to see if you like it like I do. 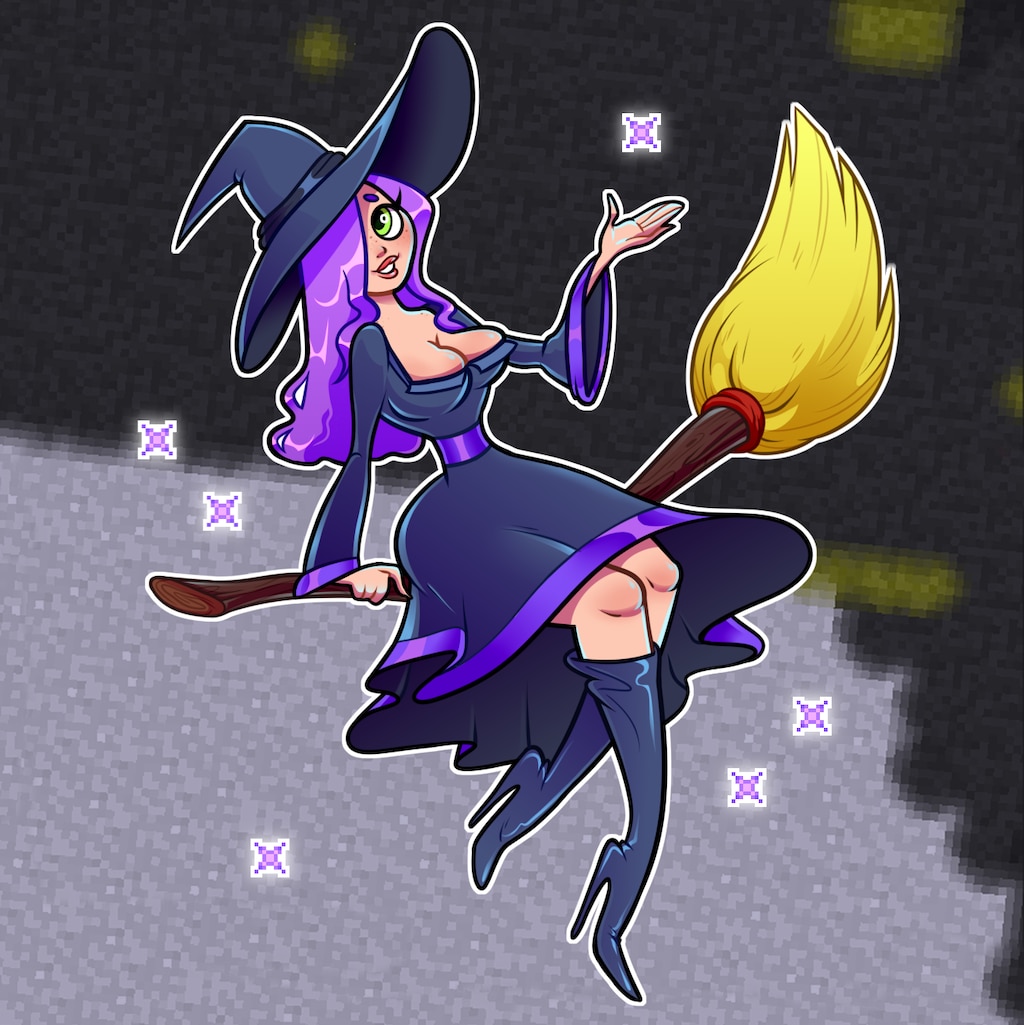 Not Recommended
2,073.0 hrs on record
wasted my time

Recommended
673.5 hrs on record
i have a brain tumor from this game 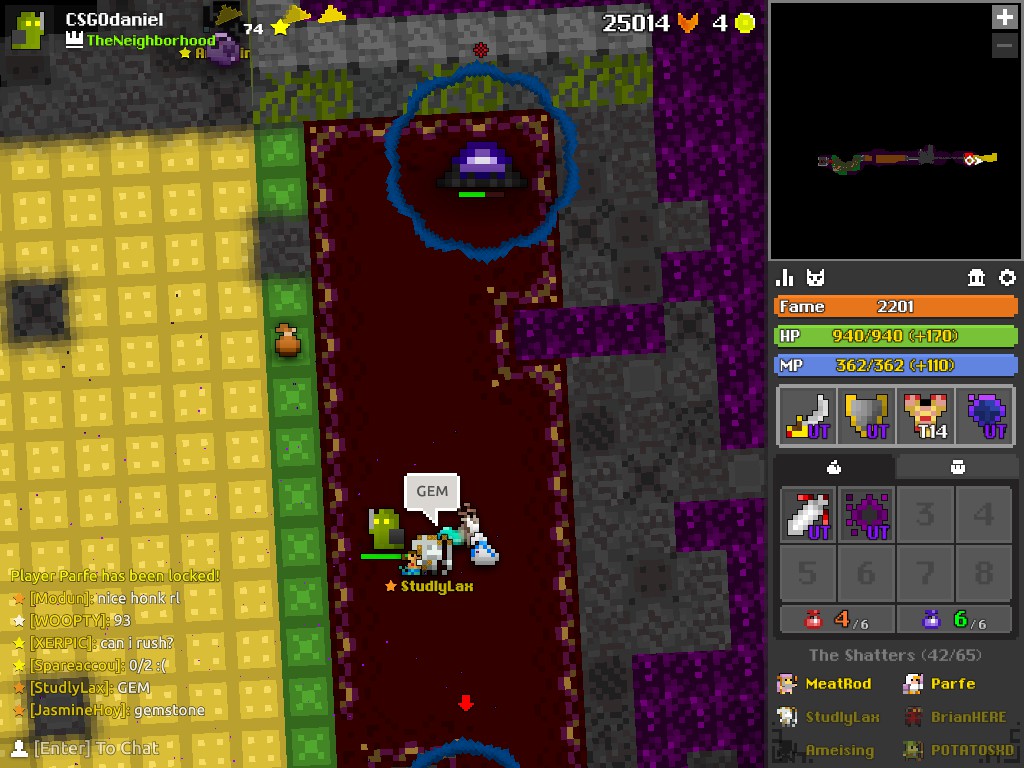 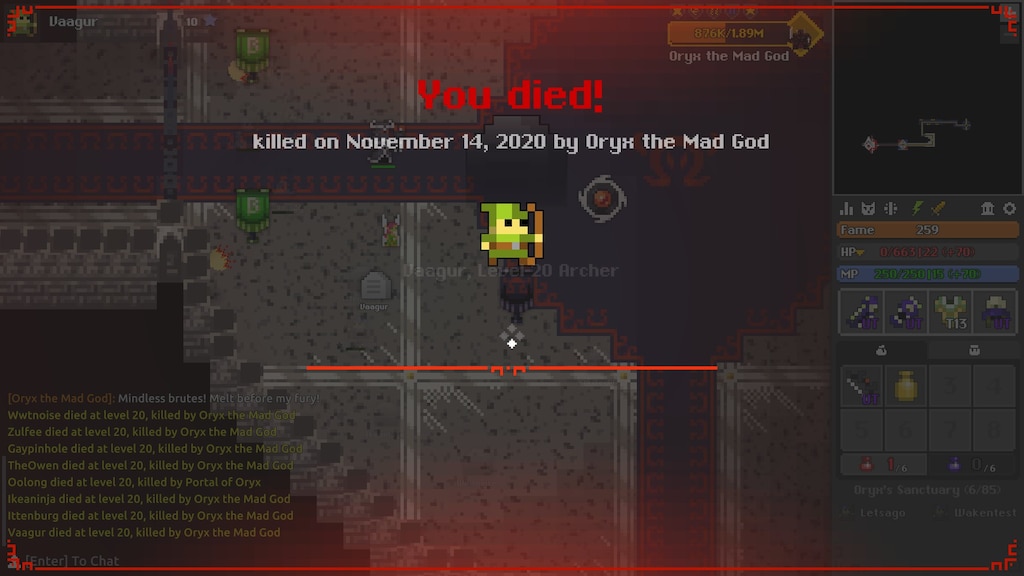 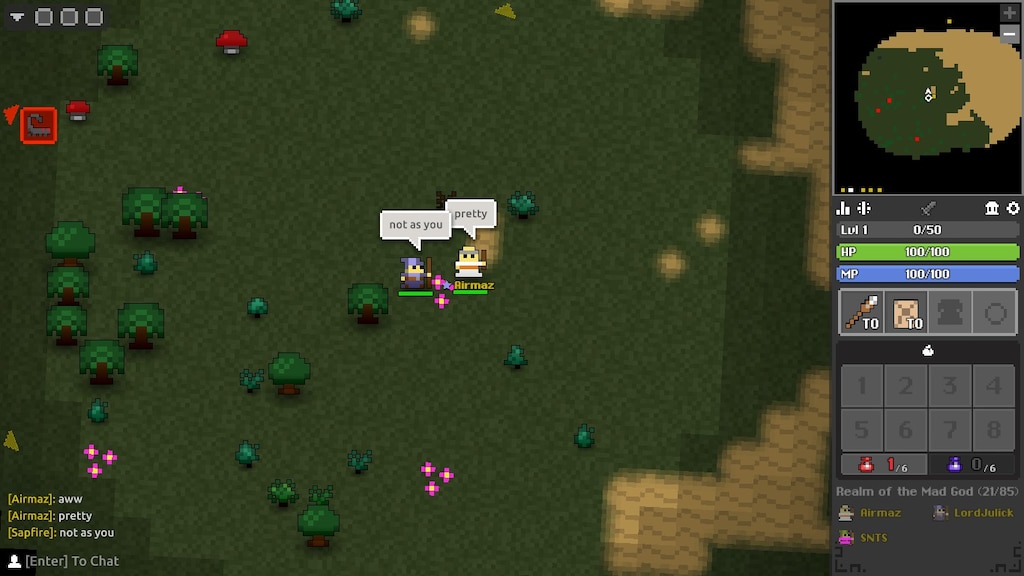 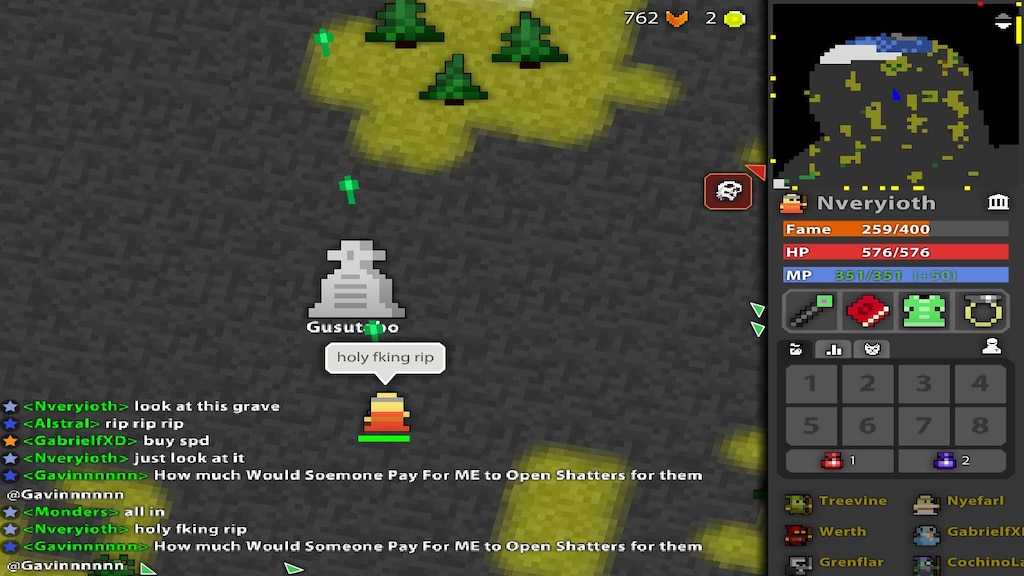 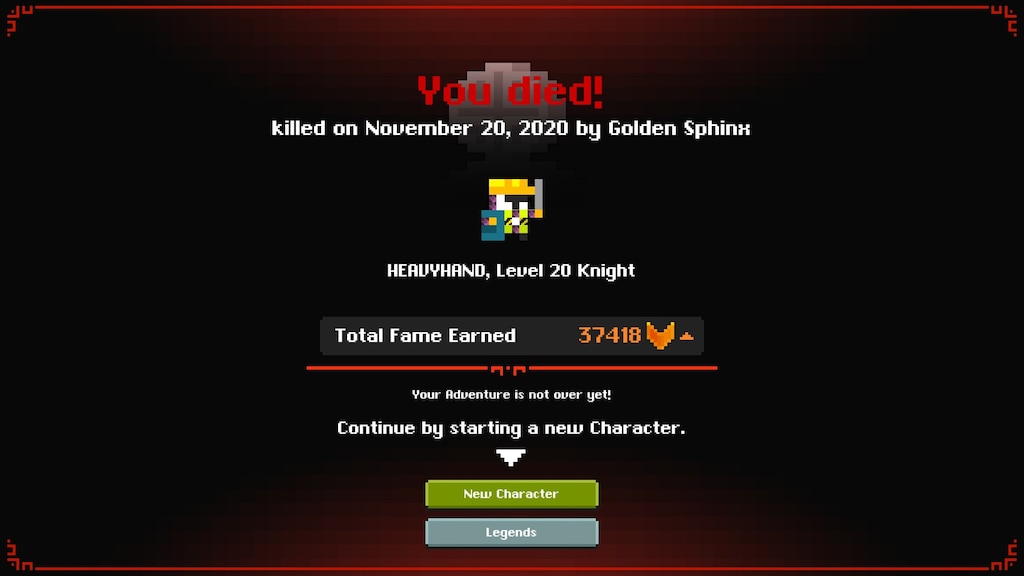 is-david
View screenshots
REMOVE PERMADEATH
This game is very annoying with permadeath. People say the game will get boring without it because everyone will just get maxed really quickly but you need to update the game more frequently. Make oryx almost impossible to defeat make new weapons and add new quests and dungeons. Stop wasting money on stuff like making a halloween skin for a sword.make the drops even rarer. Lots of players are leaving and you need to make frequent updates and changes. Create different gamemodes idk. Just do something that ...
2,901

Sassy the Sasquach
12 hours ago
General Discussions
Make a hyper-limited way to gain back a dead character per year
Maybe in the form of 1 day per year events on successful completion on a player can earn the right to raise one and only one of their dead characters back. Priests exist in the game so there being an extremely limited resurrect feature is pretty reasonable....
14

rf switch
Nov 20 @ 9:30pm
General Discussions
My opinion on Permadeath and what should be done
Permadeath, love or hate it, it's bound to stir some... Talk. But I'm going to give my take, on why I don't agree with it in this game, what I think the execution should be. First things first: Is it an attractive feature? Short answer: no, specially not in a MMO setting, that's the equivalent to saying "your efforts will always amount to nothing by the end of the day". But what's the long answer? It's an easily divisive feature to use in ANY game, but bound to cater to a specific player group and have va...
19