Rogue Tower is a tower defense game with roguelike elements and a continuously expanding path which you can influence. Unlock, build, upgrade, expand, defend.
$14.99
Visit the Store Page
Most popular community and official content for the past week.  (?)
April Fools all April
Apr 5
For anyone who missed out on the April Fools patch or wants to have a little more fun with it I have good news! For the rest of April you can get access to the April fools patch. To access it, right click on Rogue Tower in your Steam library and select properties. Then, go to betas. You can then select the April Fools beta to gain access to the April Fools balance patch. The patch will be available for the rest of April. Most achievements are able to be obtained on the patch except any victory related achievements. Happy defending everyone!

Rogue Tower
165
21
3 Lane only ballista, how to ?
So, i've done another run through, this time focused purely on ballista's, but i cant figure it out. At some point i always get overwhelmed. I've tried many ways, full slow ( poison and frost bolts ), doesnt matter, little ones still rush though everything even when i set my towers to focus on fastest, they just ignore it (bug?) I've tried the mana on ballistas, but in order to keep them going, even with % mana, mana on kills, mana with vaults, I spend so much money on the vaults to keep it going and no...
7 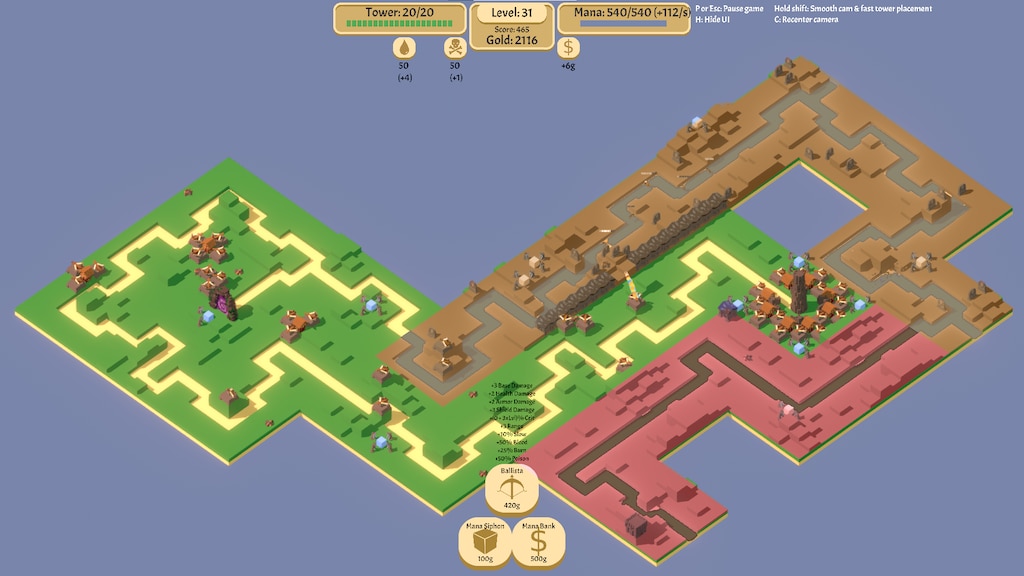 Mod Install Guide: SpeedControls
This guide is a basic introduction to Rogue Tower mods, where to find them and how to install them.
46 ratings

How to change resolution and windowed mode. (Current as of launch)
Launch Options Right click on the game on your Steam list. Or click on the little "gear" icon (called "Manage") at the game page on your Steam library. Select Properties from the context menu. Click on Set launch options button. Type in your desired ...
31 ratings 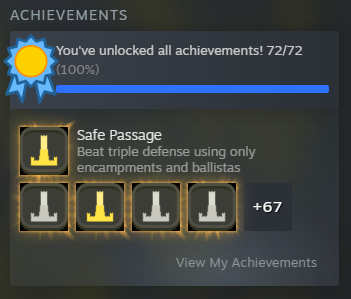 Not Recommended
188.8 hrs on record
TL;DR: Far too hard in the worst way possible.

I can not wait to be finished with this F-ing game. Once I finish a three lane defense, I'm uninstalling and never playing it again. I suggest anyone who hasn't played it, don't start. This game has simple enough of a design, immediately familiar concepts, and, now having played almost 200 hours of it, is worth the money.

But it is a poorly constructed game, due simply to it's difficulty. It's not hard in a good way, that you can overcome just by getting better at. First, the card unlock system is absurdly designed. There's 'blue card,' a permanent unlock, that increases your draw frequency from every five levels, to every two levels, and eventually every one level. The game is ACTUALLY impossible, even on the easiest difficulty (one lane) until you get that first draw difficulty card. You've got to grind a bit, and buy the cheapest cards possible (blue card are accessable after a certain number of orange cards, which are what appear in the draws between levels, and are new towers and upgrades) to unlock and then buy those draw frequency cards. Frankly, that grind doesn't even take that long, but it indicates a much wider problem: The devs paid NO attention to the difficulty of the game, and it shows up everywhere in it.

This leads to the second issue. The game has random factor on top of random factor, on top of random factor. You choose where on the path you place the next tile. What the tile is, is random. Which direction it faces is random, what monsters come from which end spot on the trail is random. Which orange card options come up after the level is random. The placement of the iron ores (which you build mines around to gain HP) and mana cubes (which you siphon magic off of by building) is random (sometimes you don't get nearly enough of one or the other or either, sometimes they're placed in locations that would be great for towers and take up the four neighboring spots, sometimes they show up on the map and are blocked things around them and are useless.) There's a building, the university, which gives great accumulating buffs, at random.

Because of all of these random factors stacked upon one another, you're not winning or losing because of your strategy, your placements, or even your choices. You're totally playing, winning or losing, at the mercy of RNGesus, cubed. Nothing proves that more than when you beat 45 levels, doing nothing more than placing ballistas on the highest spots, and just upgrading them, choosing no other towers or complex strategy, it just turns out the map unfolded well for you and the monsters spawned luckily.

The ramifications of this phony-challenge actually reveals further terrible design of this game: You'll unlock ALL of the cards, blue and orange, usually in the first ~20 hours. Once that's done, the "rogue" element of the game is done. It's just tower placement, and its just banging your head against the wall until the stars align for you. That will include MANY games where you get a great map lay out, but terrible card choices (half of the towers in the game are useless.) MANY games where you get great card choices, but a three way path split one tile away from your base. MANY games you hit one of the multiple difficult cliffs built into the progression of each attempt (30 and 40 are insanely more difficult than their preceding levels, in an obnoxious way. You can not tell if you're ready, or what to reinforce, or how to develop a strategy, you know, fun things) and don't even know what you did, or how to improve next time. Just another hour of your life wasted, no big deal....

Then there are all the little ticky-tacky problems with the game. You click on a tower, it's stat windows cover it's range circle, and you can't even see what it will place. Stupid game design, but whatever. Towers, and features like houses and mana siphons, block the space to their immediate north. Stupid game design, but whatever. The particle effects cover the screen, blocking your vision of what's hitting what monsters, and how much danger you're in. Whatever. All these would be forgivable if the game was difficult, not just infuriatingly random.

The are pretty simple solutions to these issues. Raise the prices of all the cards in terms of EXP. Lower the cost of additional towers (the price of each tower goes up with each one you build, and FAST. Tons of the achievements are based around using one or two types of towers, but the game punishes you for that, and yet, weirdly, punishes you WORSE for using a large variety of towers as the high level upgrades for each type are absolutely crucial.) Make five levels of frequency draw, and don't block their access ability behind number of other cards purchases. That's a stupid gatekeeping mechanism, that creates perverse incentives (unlock many towers to get to their cheapest upgrades to get the raw number of cards needs, or stand NO chance.) Show the player WHICH tile is going to be places next, allowing them to choose where it's going to be place. It's still random what comes next, and how it's connected to the path can be random, but give the choice of where to place that randomly selected tile with the knowledge of what it is. These are easy fixes that smooths out the difficulty curve while maintaining the randomness and challenge, and makes the game less infuriating. 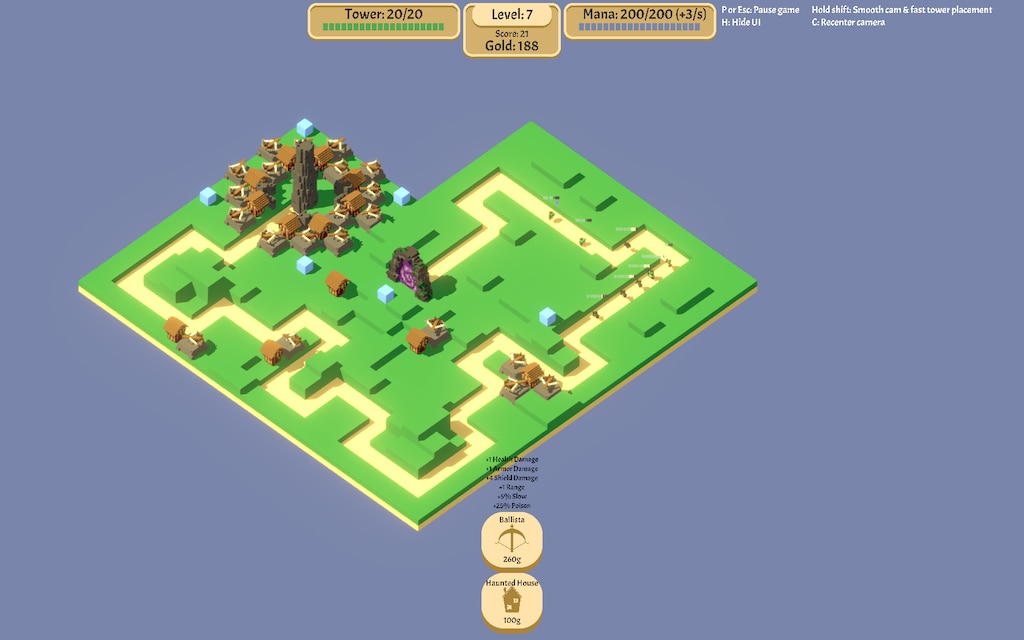 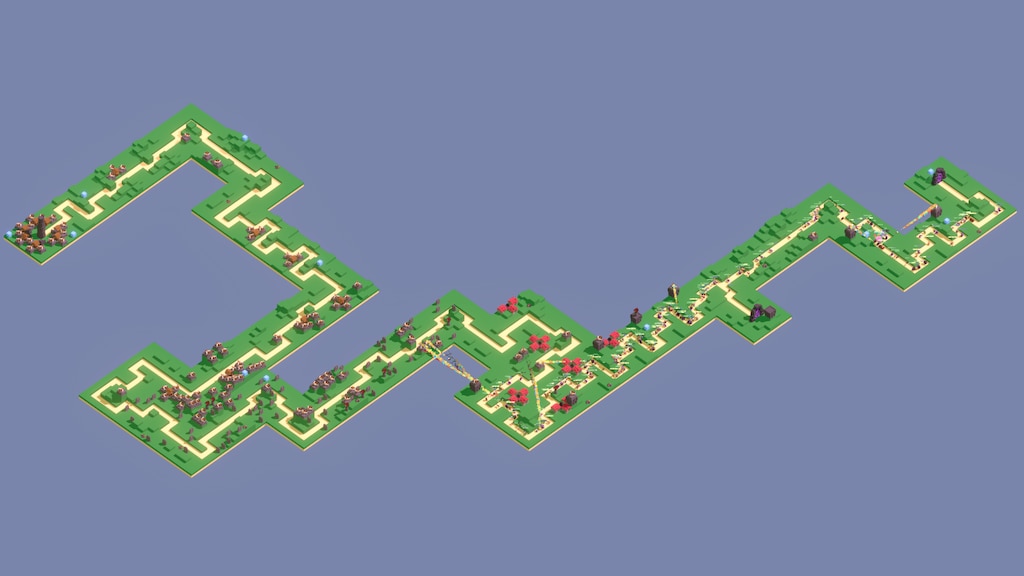 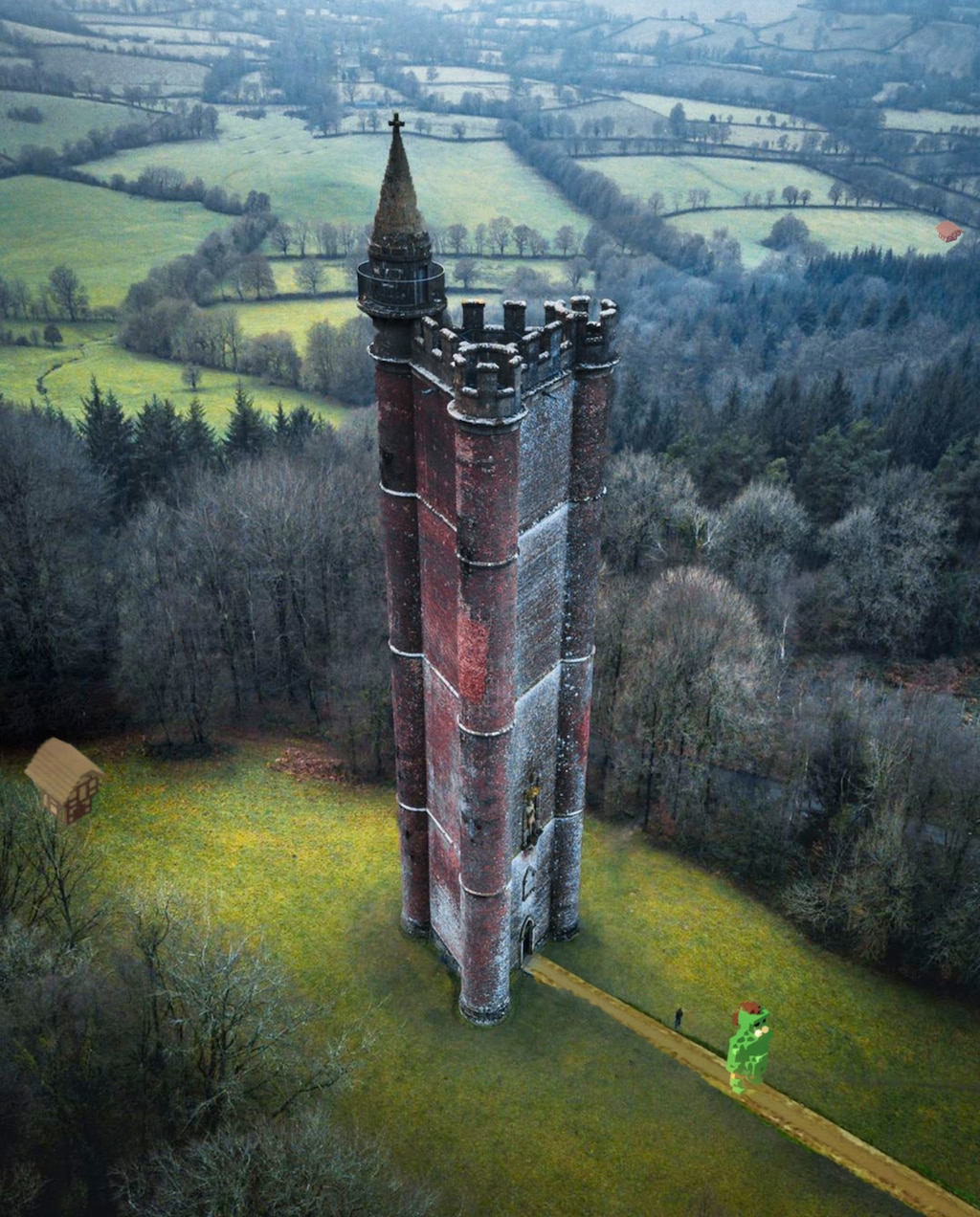 Not Recommended
132.6 hrs on record
Game is horribly balanced, the game ramps up in difficulty without warning. You have 30 ways of no trouble only to die without warning. It feels like your chance of winning is completely controlled by RNG. The game has a lot of potential but I cannot recommend it in it's current state

Not Recommended
21.9 hrs on record
This game was fun for the first 10-15 hours, then became more and more tedious as time went on. No time control (and seemingly no plans for time control) adds to the problem, but after a while I found myself just getting bored and quitting before I finished a round. April fool's day prank was imo a blunder, and left a sour taste in my mouth. If you can get it on sale, it's probably worth $5 all things considered. 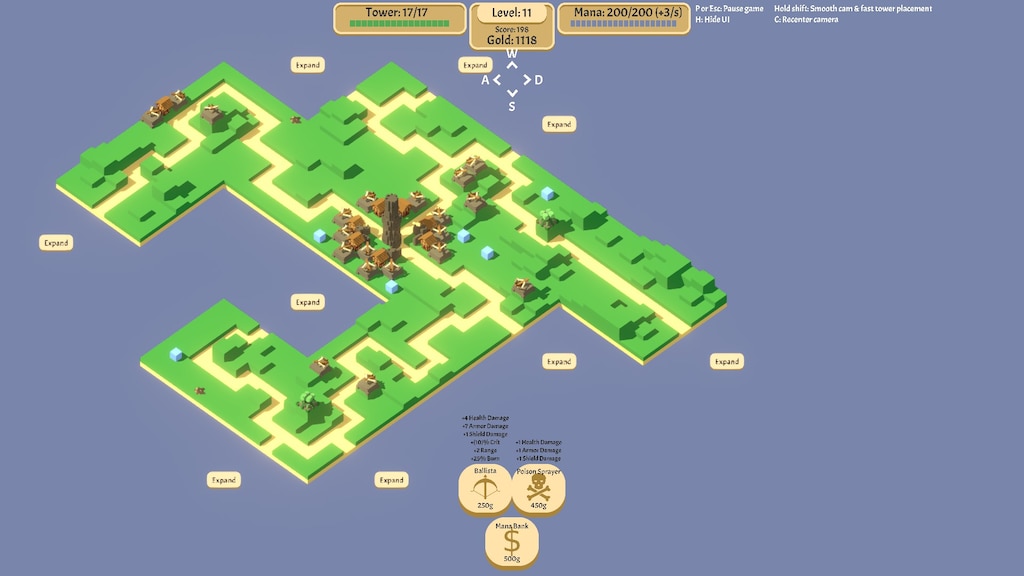 0
1
When the RNG gods hate you, this is the kind of map you get 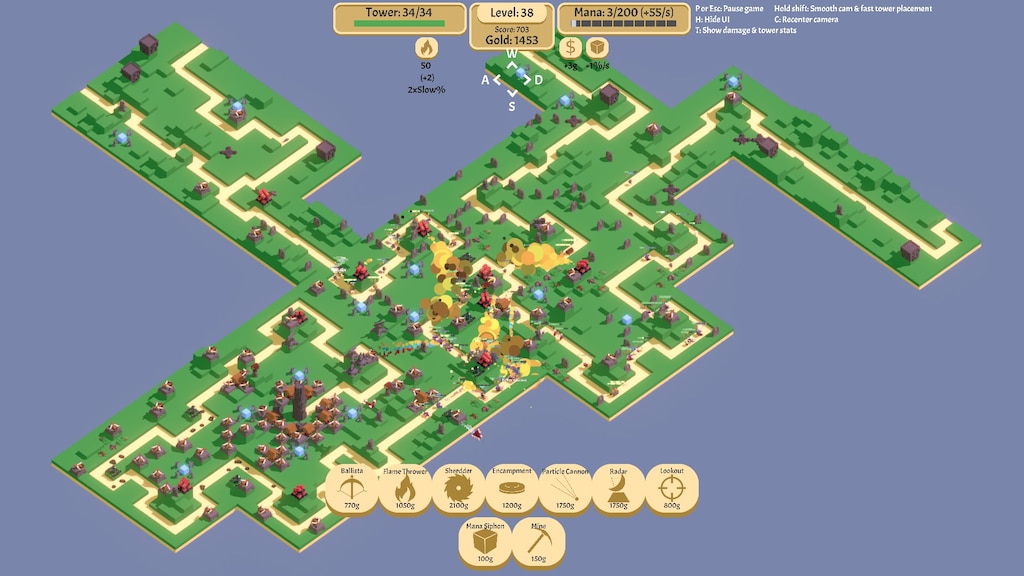 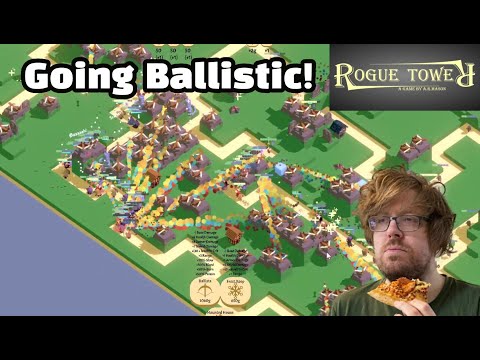 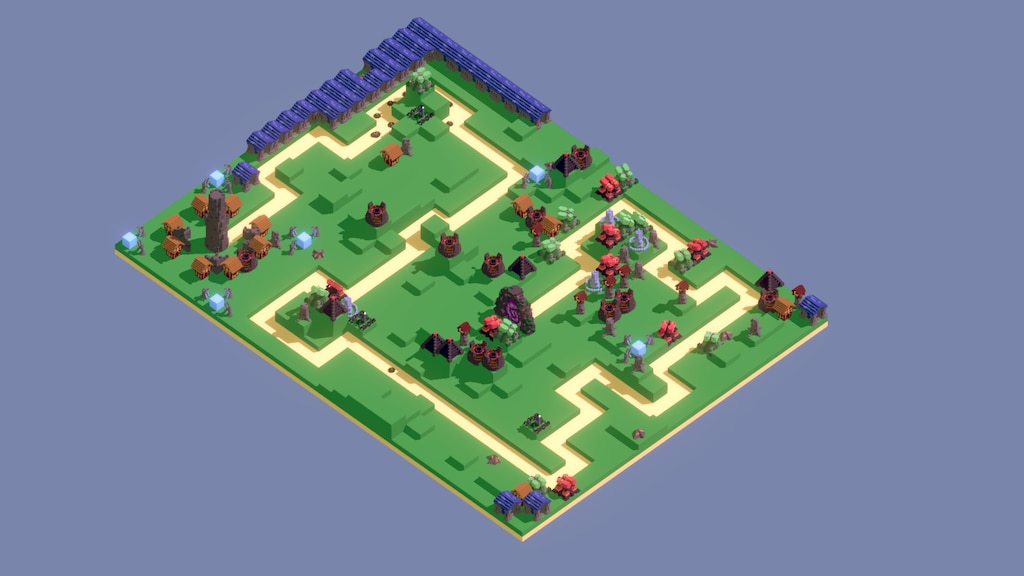 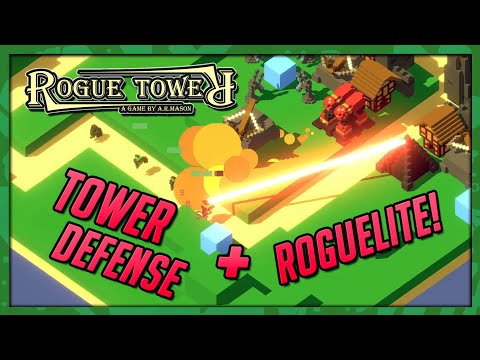 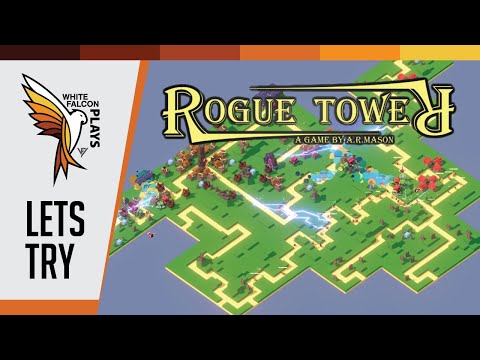 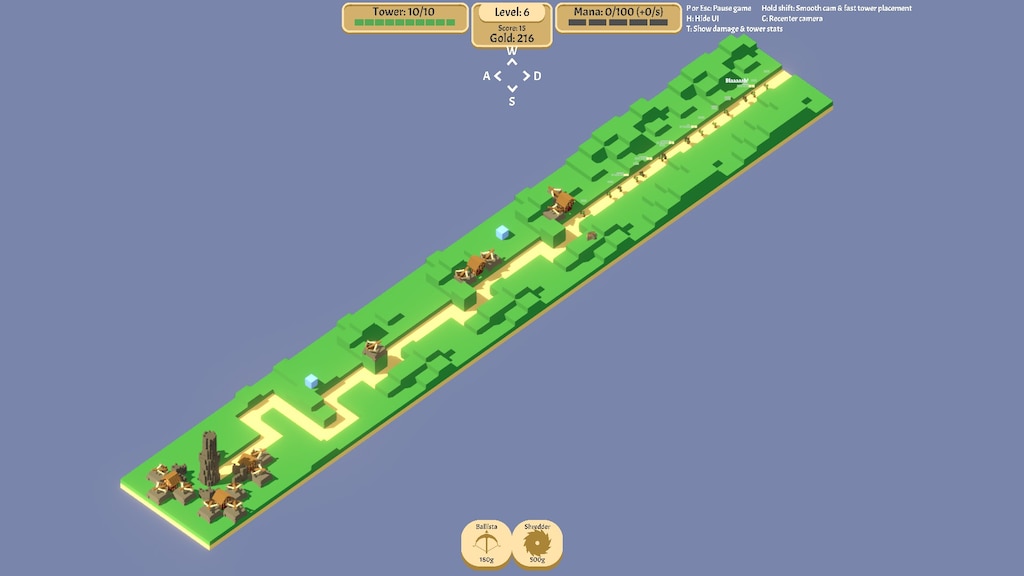 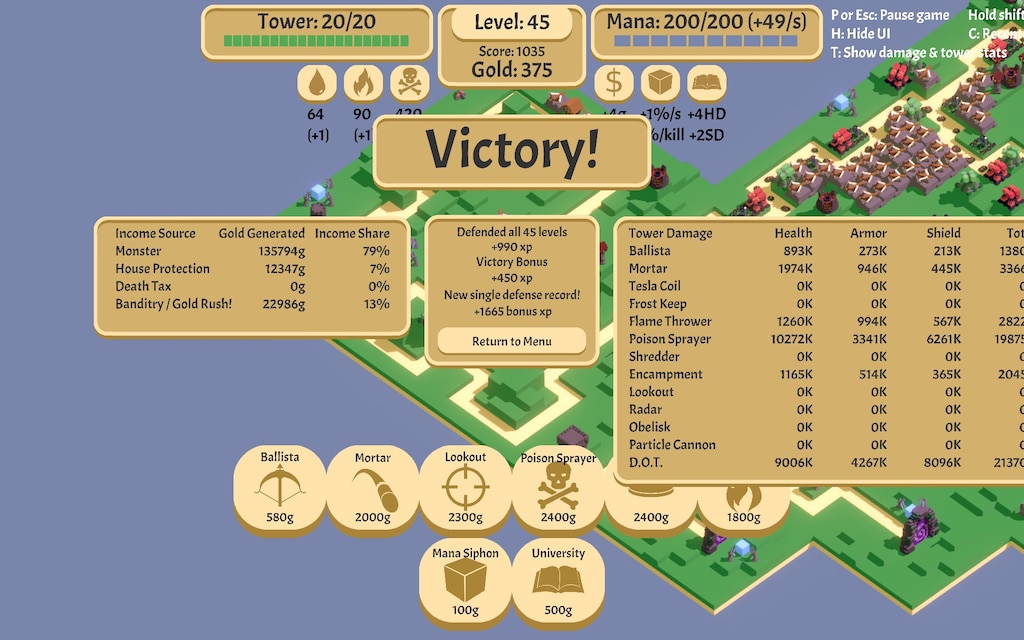 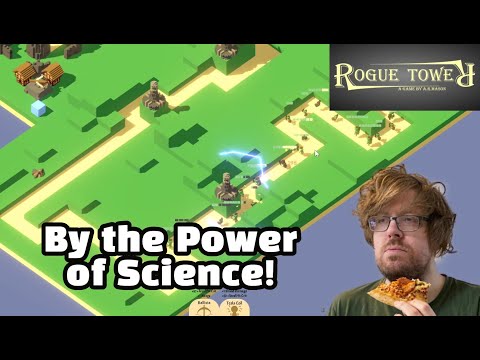 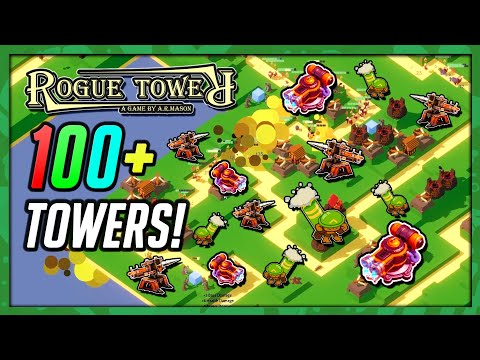 TimeToGrind
View videos
Lacking info
I've seen streamers have their in game buff displays over their weapon. Lets say you get 25% fireonf your balista, it says 25% fire dmg on top of your balista icon. My game doesn't display that. If I click on a balista it will show me it also do 25% to fire, but is there any way I can get it to display in game? There isn't really a lot of option to fool around with, so I tried everyoen off and every on, but it' doesn't seem to change anything....
3

satioh
23 hours ago
General Discussions
Put Your Suggestions Here
Let's consolidate all suggestion ideas here. I've skimmed through other threads and pulled suggestions from there too. Leave yours in the comments. Try to keep suggestions realistic. Adding nukes or the ability to choose your own pathing will take away from the spirit of the game. Menus/general gameplay 1. Fast Forward - at least add the option if there are fewer than 10 creeps left 2. Stat Board - A master stat board showing what towers you have, how many of each, which upgrades you've unlocked, and ...
125

Punk
May 5 @ 8:21am
General Discussions
Happy April Fools
Apr 3
I hope everyone enjoyed the totally balanced balance patch this weekend. Just a bit of festive fun to bring in the new season. The game has been reverted to version 1.0.15. Now it's time for me to get back to work on the next patch which may not be released for a short while since It will contain the first major feature update which will bring new life to the monsters of Rogue Tower and hopefully some fun extras too!

Changes
The ballista has received absolutely no change.
Mortar is no longer long-range artillery.
Increased the amount of love the Tesla coil can spread in one hug.
Frost keeps no longer slow but are still rather chilly.
Because of the recent rise in gas prices, the flamethrower’s price has been increased due to its high amount of fuel consumption.
Someone injected pure mana into the poison sprayers.
Shredder’s sawblade has been rescaled to be more realistically sized.
The encampment has taken up Frisby golf.
Lookout reticle has been slightly altered to make it more clear which enemies are currently marked.
Honey, I shrunk the planes.
Obelisks are tall boys now.
Particle cannon thiccc-ness increased.
Due to the massive increase of ghost hunter YouTube channels, haunted houses have loss all value and are now free.

Rogue Tower
947
235
why do frost towers suck so much?
why do i have whole armies of guys just walking through frost tower zones and none of them are slowed? is there some kind of resistance unit?
13

jackal[ronin]
May 3 @ 8:40am
General Discussions
I got a short map - i thought i'd get rolled
But holy COW did the ballistas tear sh*t up!!!
7