Blast through sinister enemies and bring peace to the Solar System in this exciting space adventure for players of all skills!
Visit the Store Page
Most popular community and official content for the past week.  (?)
Bringing the Characters of B.ARK to Life
Dec 19, 2020
At Tic Toc Games, we put together our love for SHMUPS and traditionally animated TV shows together to create our multiplayer co-op shooter, B.ARK. The look of the game went through quite an evolution from when we first showed it to today. Here is the story of how our art process and the game’s look got developed. 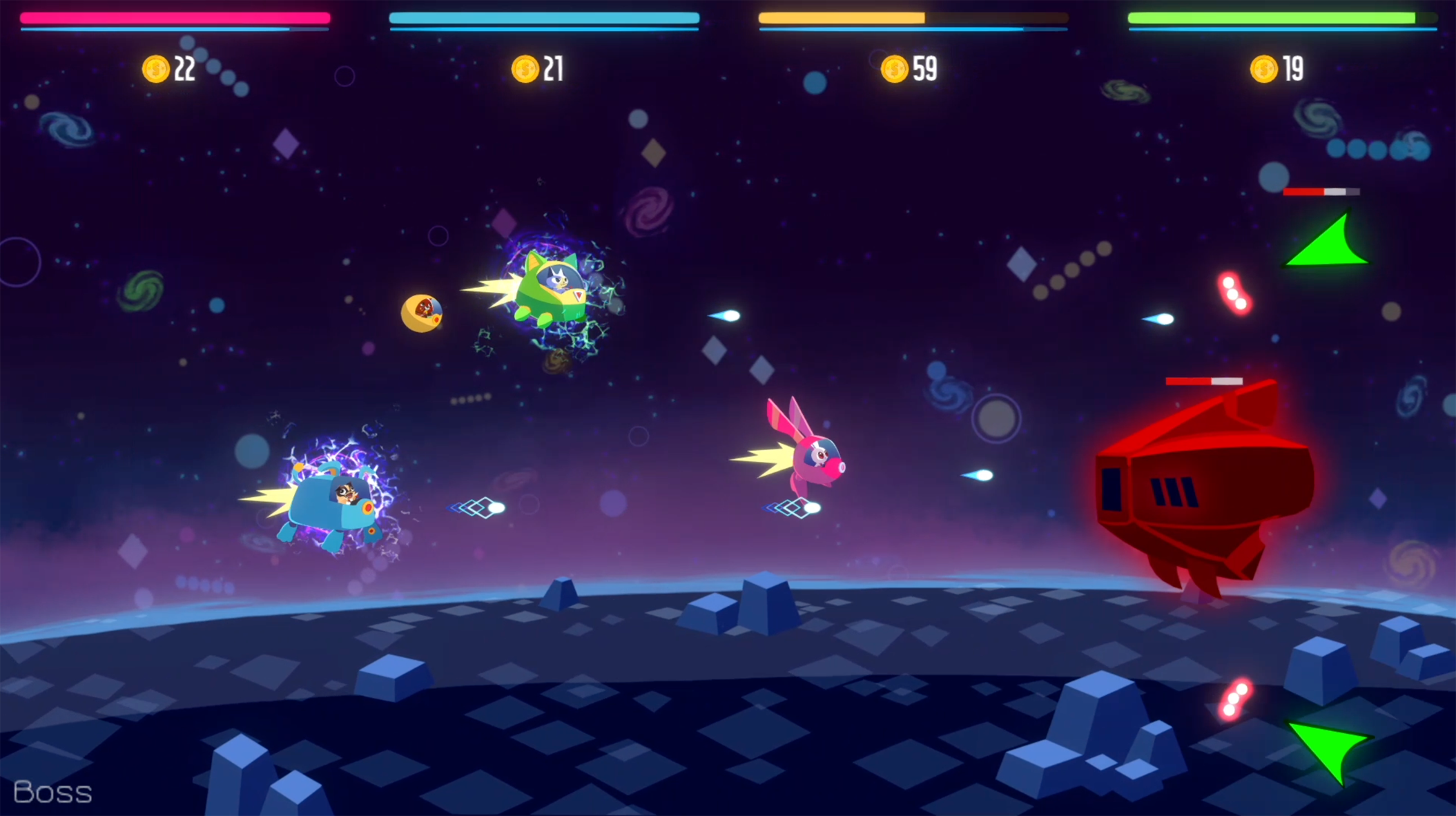 The core concept behind B.ARK was to make a SHMUP that was accessible to all age groups while still maintaining the challenge for more hardcore gamers. To achieve that, we wanted to make a game that was very co-op friendly where a stronger player can help carry a more novice player through the game.

We made a 4 player prototype, and our test audiences really enjoyed it! We then had to think about where to take the narrative and look of these characters, and how we were going to bring them to life! 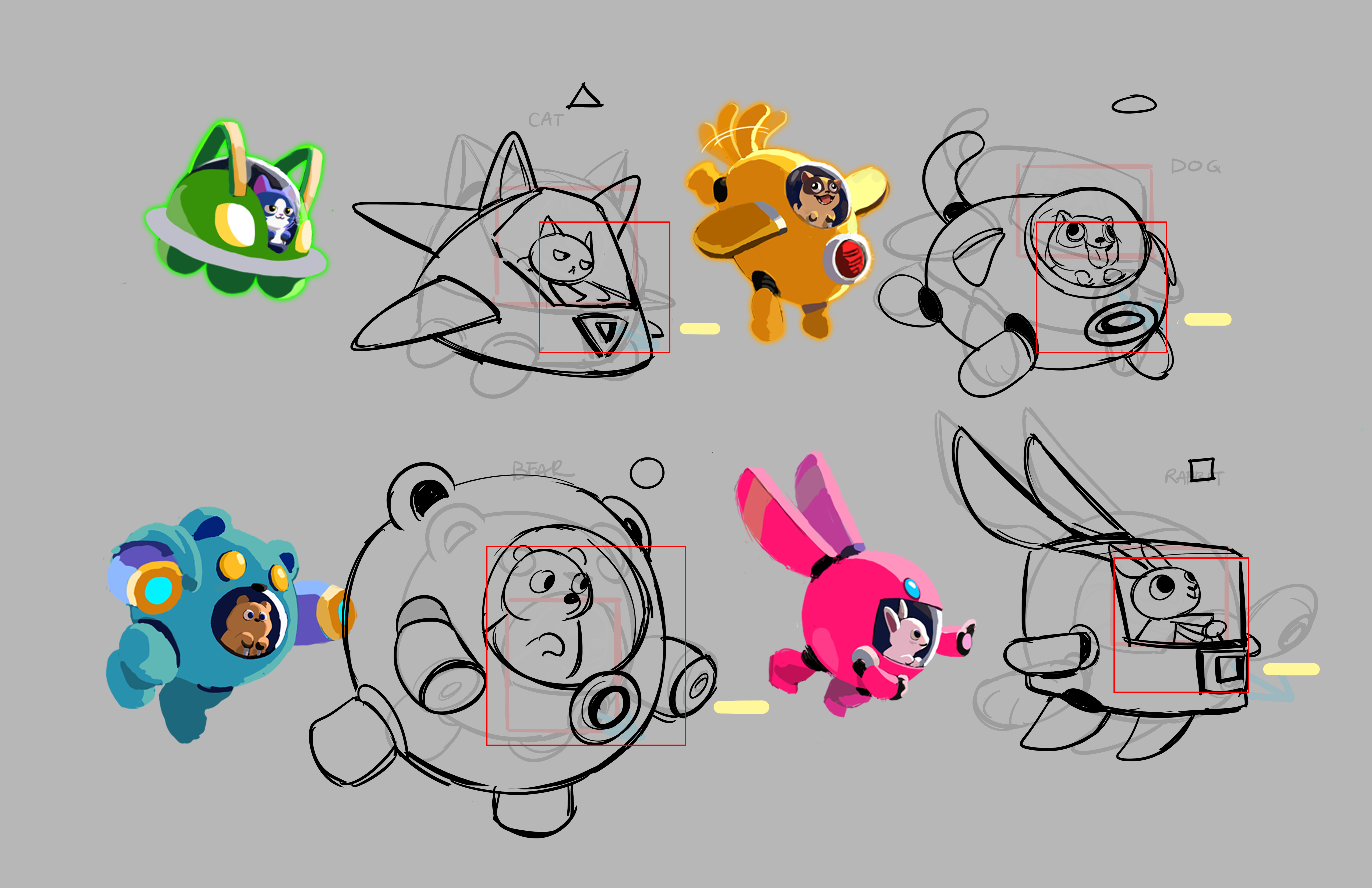 Many iterations of the characters were made while thinking about the type of abilities each one has and how that gets reflected in their look. We wanted the cat to be small but aggressive, the dog to be friendly, the bear to be strong and defensive, and the rabbit to be quick. 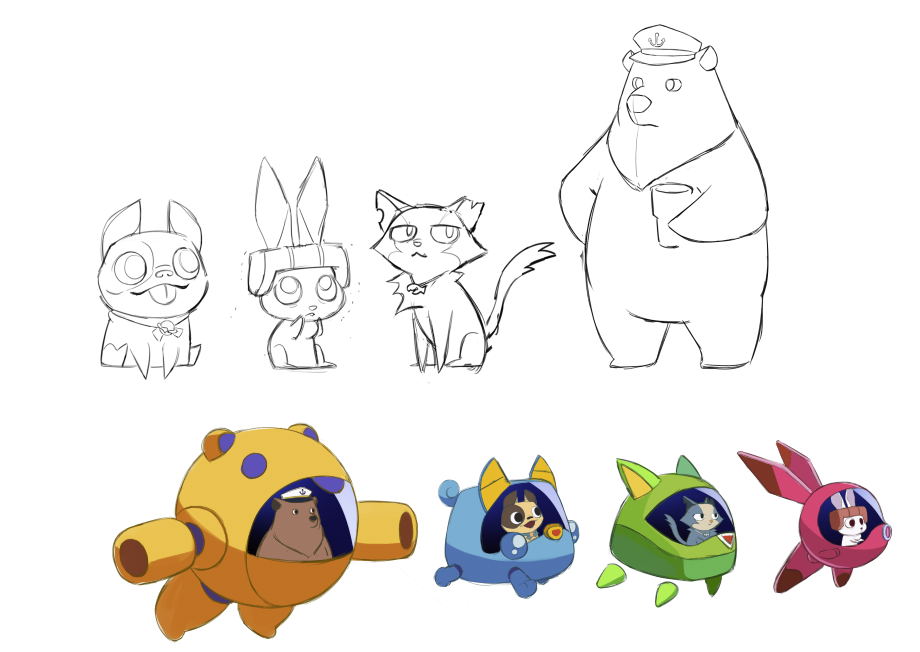 We settled on looks that best represented their abilities as well as their personalities.

For the final design of the ships, we decided to go with yellow for Lucio the bear to show that he’s strong and fortified, but a lot of round edges to also show he’s still cuddly. Barker the dog, we went with blue as he’s the friendliest, but gave him a few angles, so he’s not just a softy. Felicity the cat retains some sharp features, but also stays compact, and Marv the rabbit is very much a big triangle showing that he’s all about speed.

During this time we also did a few passes on the pilots. Making sure their personalities match their abilities and the backstories that we were giving to them.

Turnaround
Once we finalized our design, it was time to prep it for animation! Animators were provided with turnaround sheets of each character so they have a good idea of what details they need to know about from all angles.

Expression Sheet
Along with turnarounds for the characters and their mech ships, we also created expression sheets for the 4 main characters and some of the non playable characters. These were useful for several areas including dialogue box portraits, cinematics, and player heads up displays.

Expression sheet for all of Marv’s emotions

Thumbnails
Now it’s time to animate! Animators usually start will small thumbnail drawings to map out the animation sequence that they are going to work on. This helps them prep, but also helps us review and make sure the sequence works for the gameplay in mind.

Keyframes and Timing Charts
Once thumbnails are approved, the full scale animations are started with animators drawing keyframes. These are the important poses that define the action and provide enough information to be sent to other animators to inbetween the motions. 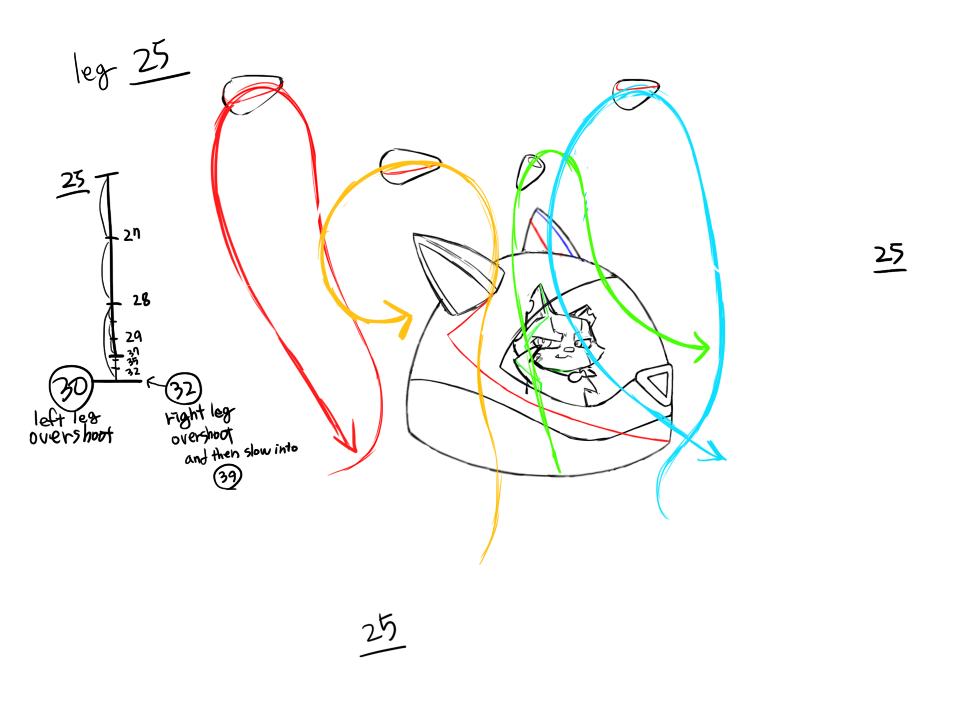 Keyframe of Felicity’s victory animation with guidelines and timing charts

To further help the inbetweeners, the keyframe animators will provide timing charts that show how many frames will need to be added between each key, and how to space out those frames to ease in and out of motions.

Inbetweens
After keyframes are completed, they are sent to inbetweeners to fill in the animations between the keyframes. This helps smooth out the animation and bring it to life!

Final Color
With approvals on inbetweens, all that’s left is cleaning up and coloring, and that’s one animation done! Below you can see the whole sequence coming to life.

Now you just have to take that and multiply the process with all characters, enemies, and bosses! Whew! Thanks for reading! Hope this provides you with more appreciation for animation and the time it takes to make this beautiful art form!

Don't forget to add us to your Steam wishlist!

B.ARK
3
0
B.ARK Questions
1. Will there be any pre-order/limited time/exclusive content? 2. Is there anything missable or could I replay any mission? 3. What systems will this game be released on? 4. Will this game be identical on all platforms?
4

joeymeboy98
Sep 30, 2020 @ 2:02pm
General Discussions
Feedback
Cool game! I like how it does away with some of the old mechanics in shmups, like contact damage upon hitting walls or one-hit deaths. I like the dodge, too. The presentation is cute and the music is nice. I had some gripes though: - Non-rebindable controls - The default controls felt weird on a 360 pad. "A" was back and "B" was confirm, it's usually the other way around. For some reason, "Start" was also confirm (pretty old school) but for some actions only Start worked as confirm, when usually A does t...
2 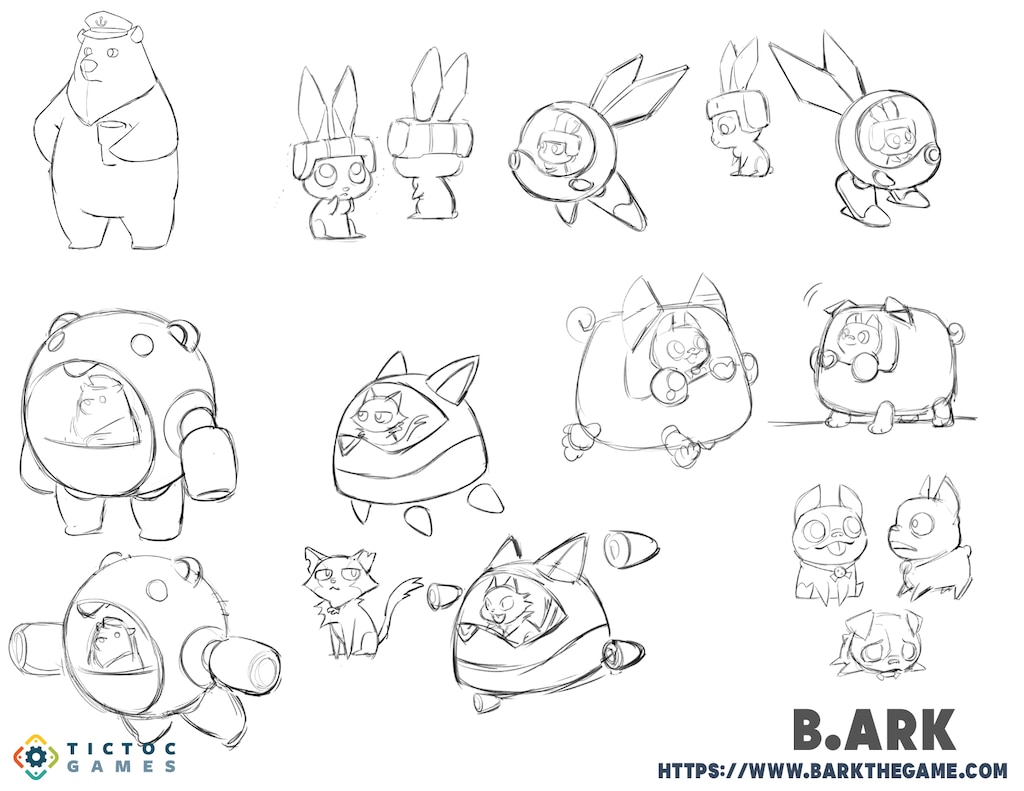 We are very excited to announce that B.ARK will be coming soon to Steam!

Thank you all for playing our PAX Demo, your feedback helped us a lot during development and kept us really motivated!

We will be announcing a Release Date very soon, so please follow us for updates and cool giveaways!

Have you seen our game's Intro Cinematic? Let us know what you think!

Don't forget to add us to your Steam wishlist! 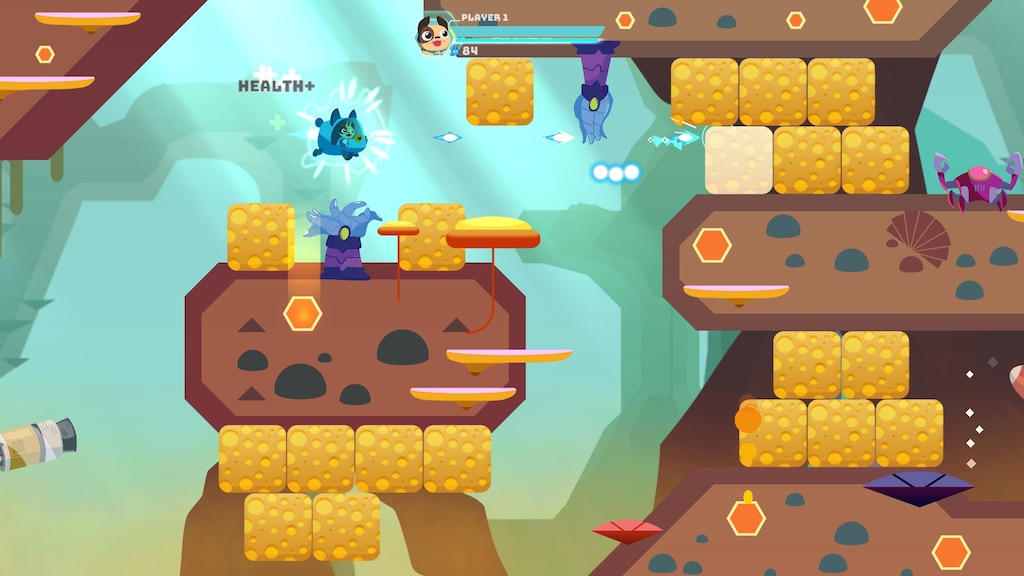 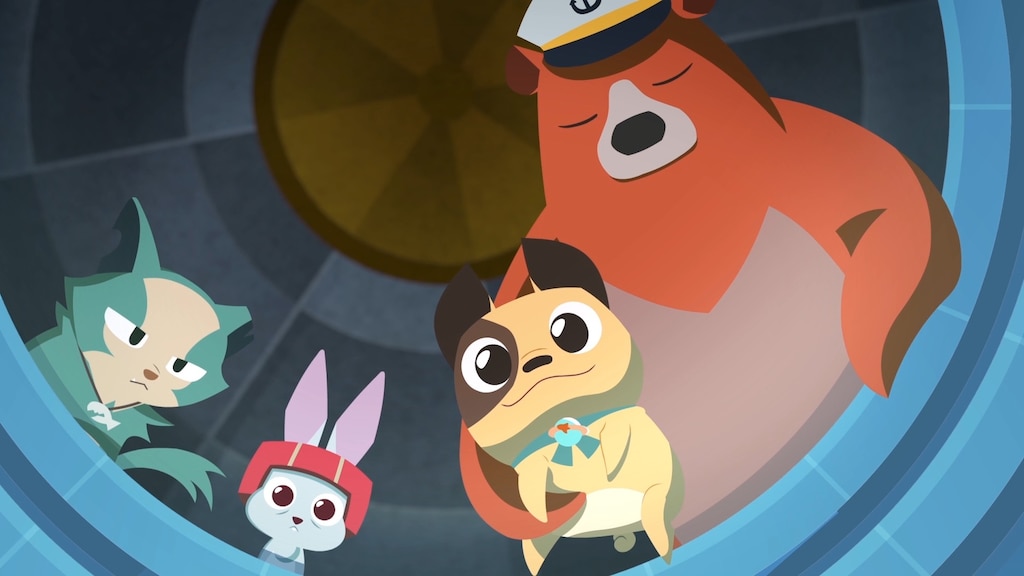 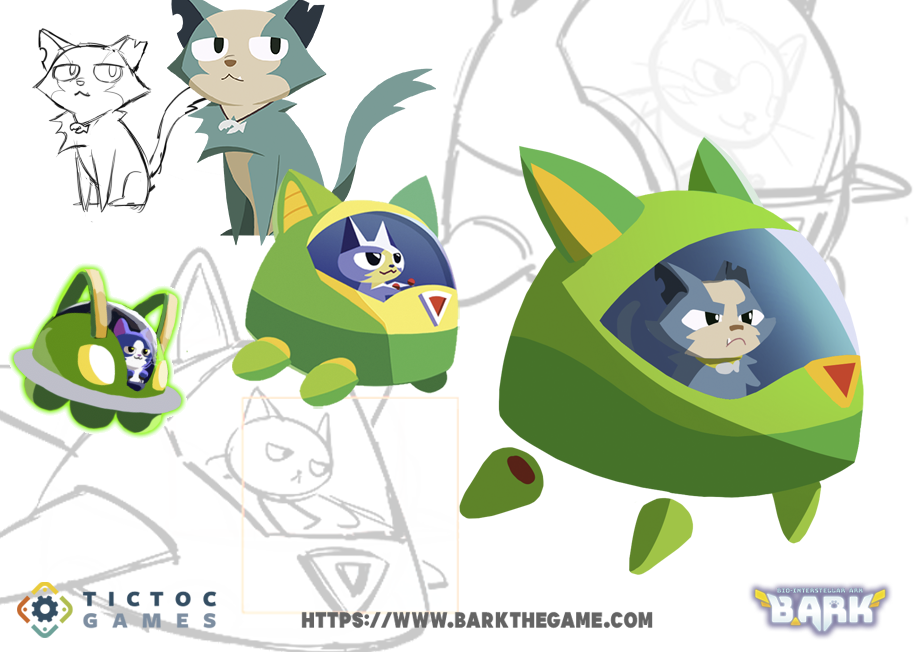 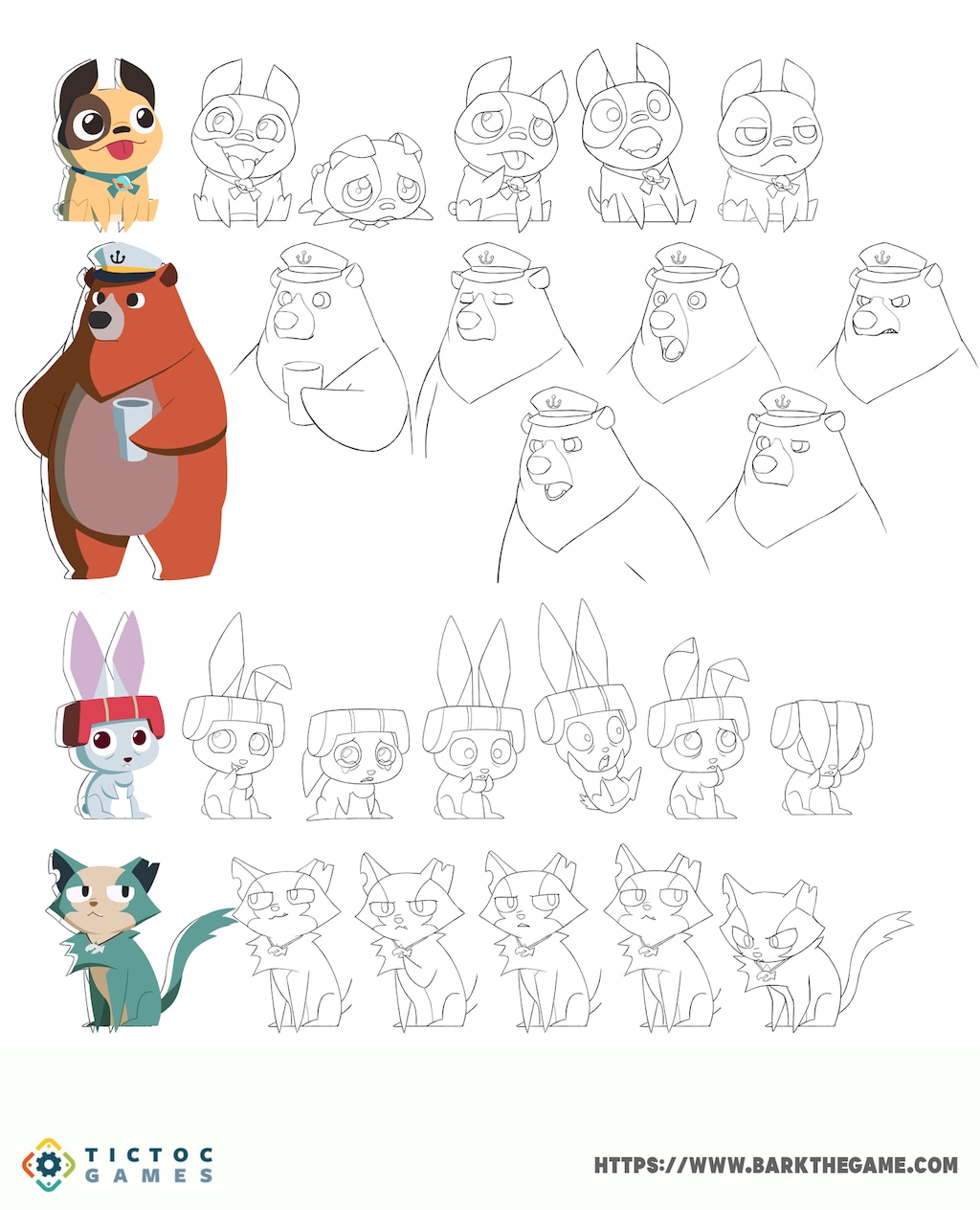 marcyay
View artwork
Welcome to B.ARK!
We hope you enjoyed our demo - we look forward to having you play the full game later this year!
0