BPM is a rhythm-action FPS rogue-like where you must shoot, jump and dodge to the beat of an epic rock soundtrack. Delve into a randomly generated dungeon where one missed note can lead to your death. Gain game-changing abilities and loot powerful weaponry to defeat your ancient enemy: Nidhogg.
-10%
$19.99
$17.99
Visit the Store Page
Most popular community and official content for the past week.  (?)
Patch #1 Patch Notes
Sep 23
Thank you everyone for a great launch! We’re so happy to see people enjoying the unique experience that BPM offers. We’ve been working on a patch last week to fix some issues. This is not the end of our support for BPM but the beginning.


You’ll have to start a new run to get some of these changes.

We’ve been reading your comments. We’ll be focusing on doing the things that improve the game for everyone over the coming months. Going forwards we want to add more: difficulties, challenges, characters, items, modes and weapons.

BPM: BULLETS PER MINUTE
590
72
FEATURE REQUEST MEGA-THREAD
Hey guys, we think it would be helpful as we work on patch #1 to have one place for all the feature requests to go. So if you could check this thread for duplicates. Bug requests to go in the "BUG MEGA-THREAD".
254

Recommended
3.1 hrs on record
Product received for free
Crypt of the Doomdancer
Overview
BPM: Bullets Per Minute is a first-person shooter where DOOM meets Crypt of the Necrodancer. Your (and your enemies') ability to shoot and use magic is tied to the beats of the awesome rock soundtrack. Shoot, tear and dodge at the rhythm of the music through procedurally generated levels in this rhythm-fps roguelike: will you be able to reach the end of the dungeons and defeat you sworn enemy?

Asgard I
Like in similar games roguelike games, at the start of each run you get your standard weapon and ability, both based on the character you chose. The first available character is Göll, a valkyrie armed with a simple pistol and a dash ability. The more stages you complete during your runs, the more characters you unlock for later use. The structure of the game, along with its unlock system and even its levels, are incredibly standard and sometimes the deja-vu sense from games like The Binding of Isaac kicks in. Although very classic, it's a gameplay loop that was tried and tested for years in similar titles: this means that will not exceptionally innovative, it's a familiar system that just works.

After you spawn in the central room of the dungeon, you'll feel right at home: rooms are interconnected and you can't leave one before clearing it. Clearing it means fighting hordes of enemies (most of the time) or bosses that change according to the dungeon you're in: the main problem, in this case, is the low variety of enemies per dungeon. Similar roguelikes got us used to a good number of both enemies and bosses, so having to deal with just a handful of monster and one single boss for the first dungeon can get pretty boring pretty fast. The same goes for rooms: playing on the same room layouts over and over becomes boring fast, making the initial areas (the one you play the most) more of a chore than something you actually enjoy.

Shoot, Dash
Tying up shooting and music beats is the main aspect of BPM and, luckily, it completely succeeds in the task, both on the controls and the actual OSTs. The latters are not as beat-heavy as in other similar games, which makes some rooms filled with enemies harder to play, since the quite frantic action makes it a bit easier to lose the beat. Controls, on the other hand, are very dynamic and shooting enemies can be quite rewarding. Moving is obviously not connected to the beats and can be done freely without limitations, along with the double jump available to the various characters. Abilities, even the ones used for moving, can instead only be used on the beat, which makes for a more thoughtful use.

New Weapons, Anyone?
Being a roguelike means that BPM is filled with objects and weapons to equip during each one of your runs: these can give your character special abilities, increased stats or simply a higher firepower. But let's proceed with order: these items can be either found on chests or bought at shops. The former is something you won't do very often, especially during the first phases of a run. This is mainly because keys are quite scarce and can be used to open up libraries, which give you a new ability. Shops are more common, as you can find one in every dungeon, but the display of objects is left to RNG, so you'll find healing potions and MAYBE some useful objects. Damn you giant chick.

The weapon shop is instead less RNG-based, but only when you actually manage to find it, as it doesn't always spawn in each dungeon. Weapons and items are, honestly, a hit-and-miss, since items usually just upgrade one or more stats and only sometimes add interesting effects to the game: when you get one of the said items, though, its description is often cryptic and it happened to me, multiple times, to end runs with an object which ability still wasn't clear to me. Weapons are instead more standard, I appreciated the different reload patterns (that must be synced with the music), but even here the variety isn't stunning, especially in the first stages.

Verdict
I usually really like this kind of games, so I had quite high expectations for BPM. Unfortunately, while the game's core works (and works really well), the low variety of enemies, rooms, items and weapons can make this title quite repetitive. My advice is to either wait for an update which brings new content or pick up the game on a discount.

texdade
611 products in account
0
BUG MEGA-THREAD
Hey guys, we think it would be helpful as we work on patch #1 to have one place for all the bugs to go. So if you could check this thread for duplicates. Feature requests to go in the "FEATURE MEGA-THREAD".
169

Recommended
5.2 hrs on record
Good game. Simple, reload and shoot on the beat. Music goes well with each level. Only thing I wish it had was an explanation of gear, characters, guns, enemy etc. in the main menu.

Not Recommended
1.1 hrs on record
Product refunded
This genre has potential but this game isn't it.

It feels barren, samey and uninspired. It's like a 90s shooter developer was brought to the future, shown DOOM/roguelikes/rhythm games, and given a year and Unreal Assets to come up with something as fast as possible. There is heart in the concept but the execution is bland. 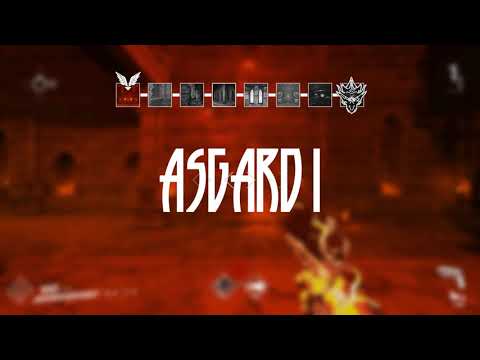 0
0
What if BPM: Bullets Per Minute supported custom music? 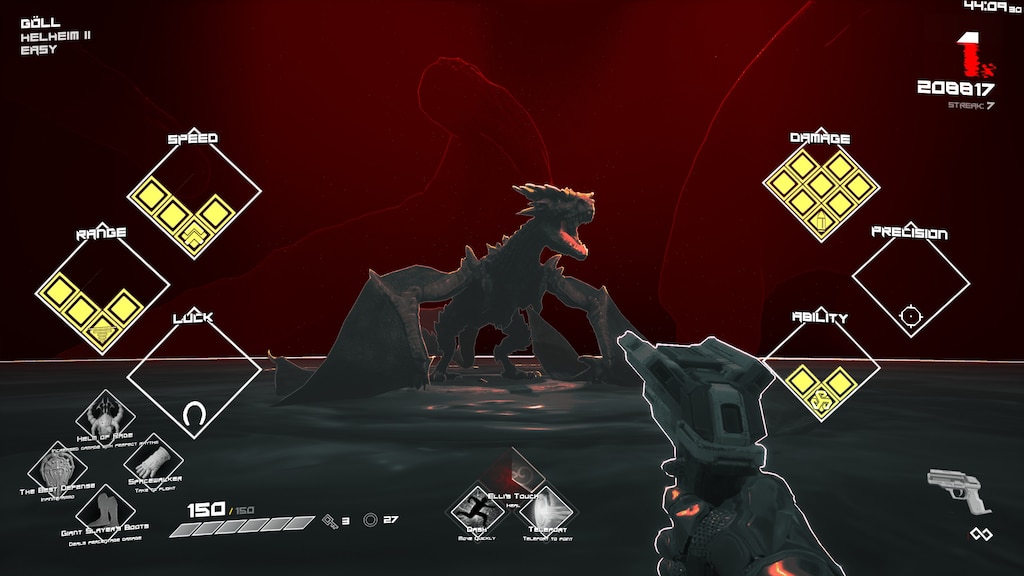 A Simple Guide To All Weapons
Nothing too fancy. Just a simple explanation of the guns' stats and how each one works.

Raidey
View all guides
Guardians nerf?
Do you think guardians should be nerfed? So many times I'm obliterating every enemy but they wreck my ♥♥♥♥ nearly every run, it's overwhelming when they're in a room with a buncha others
7 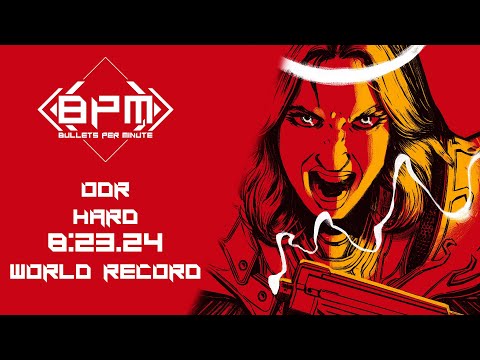 Beginner's Guide to BPM
A beginner's guide made from a beginner. Let's get something out of the way I did not have early acess to this game I am no expert on this game If you have new stuff you discovered comment it down belo... 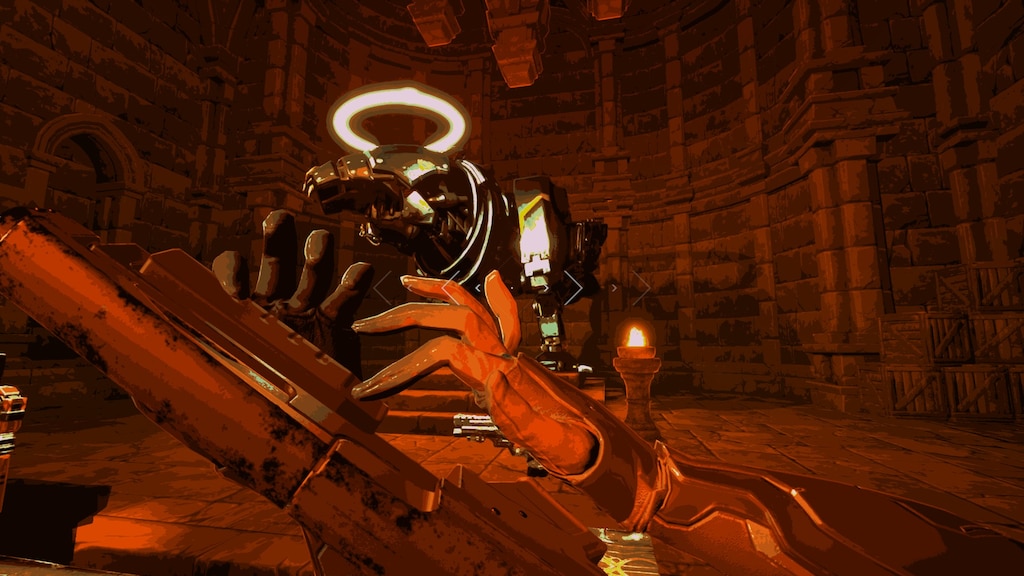 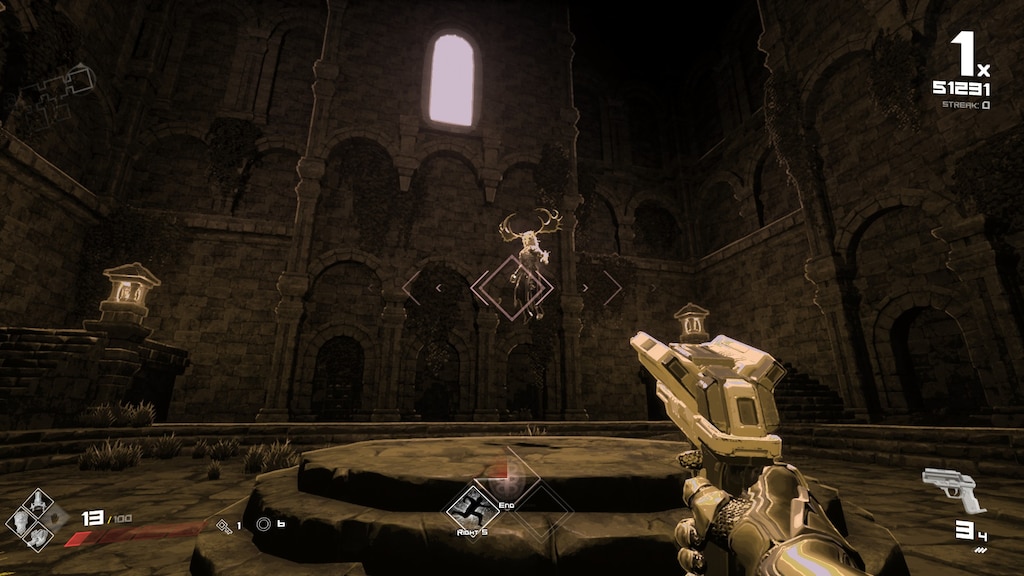 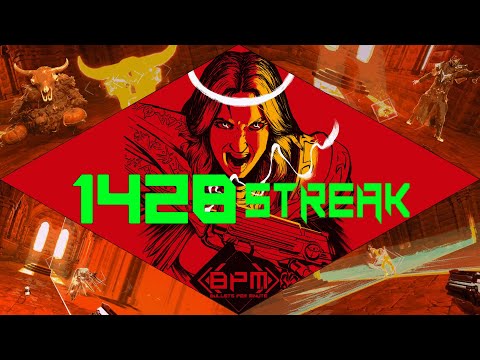 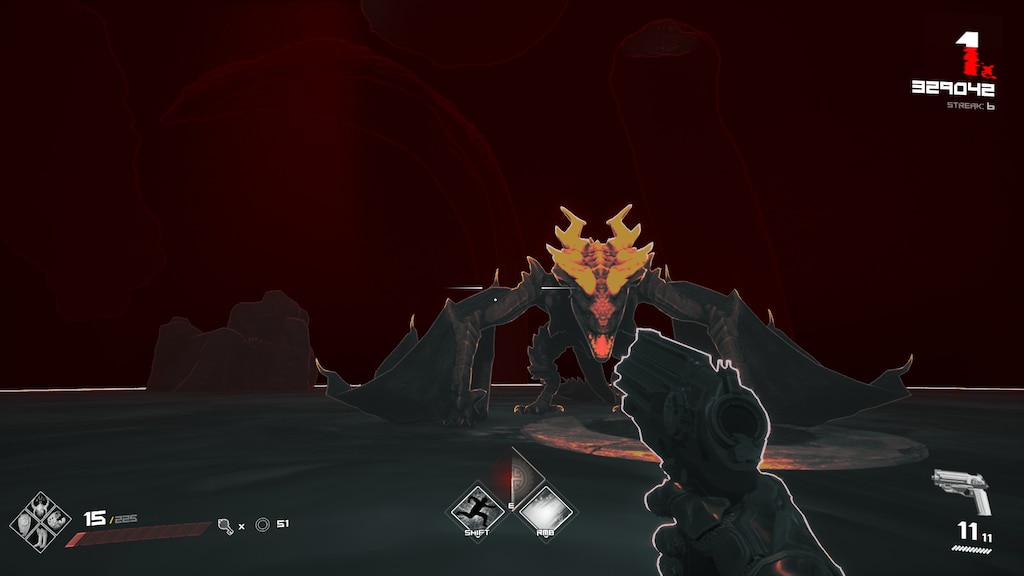 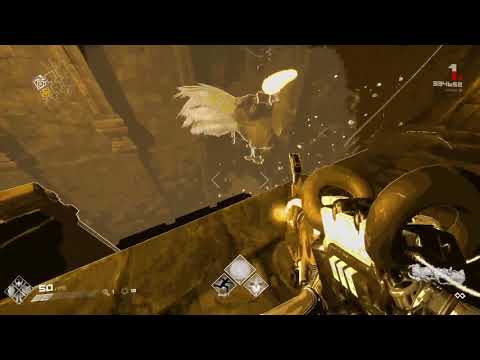 BPM - 100% Achievement Guide
Most of the achievements in BPM are straightforward, but I thought it might help to list some tips/tricks for the harder ones. Keep in mind that beating the game on hard difficulty will unlock the easy difficulty achievement (and ability) for each char... 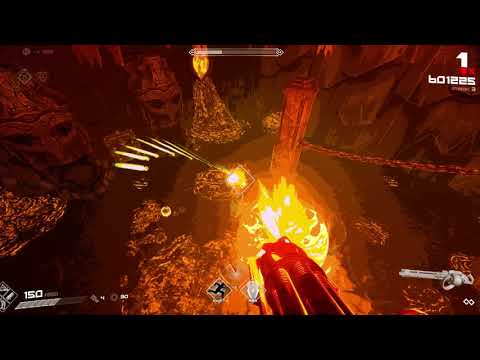 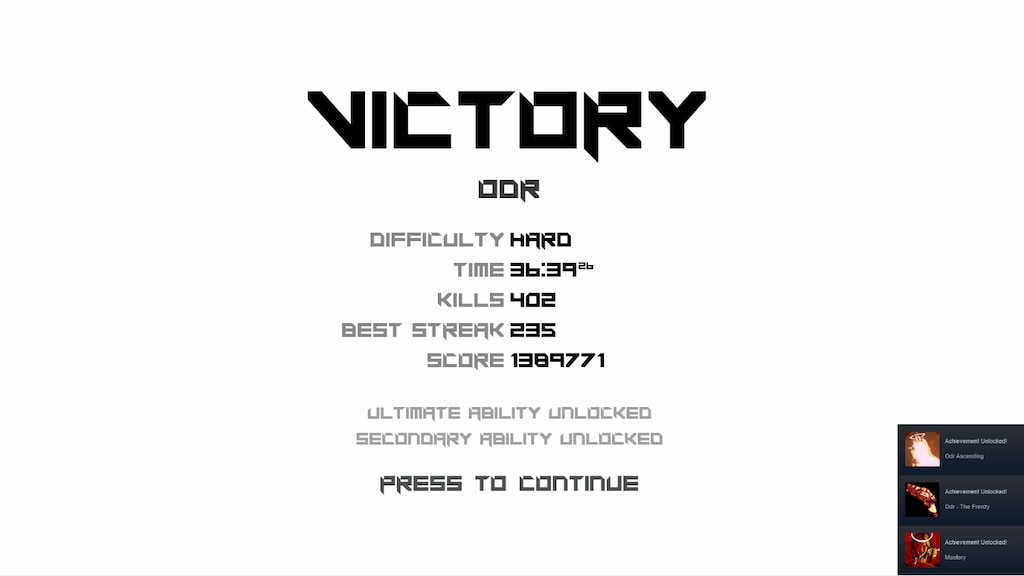 Etriuswimbleton
View artwork
Why this game have such awful artstyle?
Played it a little bit, gameplay wise it looks interesting, but after 10 minutes of playing my eyes get hurt. I am sorry dev, but its a refund.
14

Dimax-men
4 hours ago
General Discussions
Items question
So what does boots with "Strike to the beat" and helmet with "Opening Mega shot" do? I didn't find any effects from these items.
2 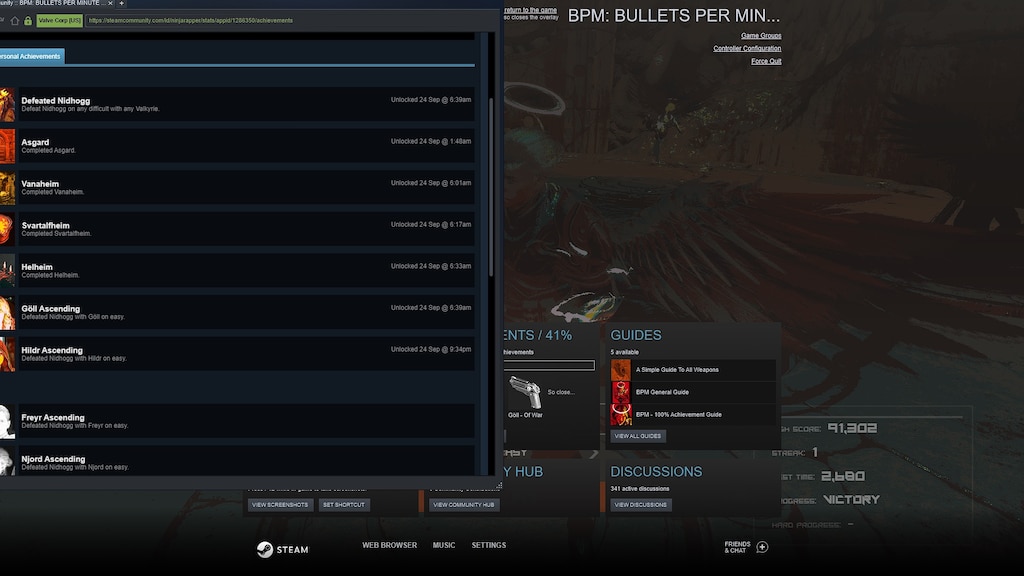