BUILD YOUR VIRTUAL WEED EMPIRE: Grow the hottest strains & crossbreed new ones, roll your own Blunts, sell Bongs, hire Growers, make Solventless Concentrates, handle Rival Dealers, befriend Influencers, smoke Dabs, ride a Dolphin, and More! WELCOME TO WEED SHOP 3!
$19.99
Visit the Store Page
Most popular community and official content for the past week.  (?)
The Not-An-Update Update
Jun 23
So this week we had a bit of an oopsie when the game crashed the editor and corrupted some project files. Yeah, Weed Shop 3 not only crashes on potato gaming PCs but also on semi-potato development rigs ːws_damanː Anyway, long story short, we had to revert to an older backup and waste days of development time restoring and testing the latest changes to make sure we don't brick the game for everyone else...

So this week's update is mostly just fixes with a couple of new items sprinkled in:

ːws_peaceː Updated the sales staff AI to not sell strains marked "not for sale" when they run out of stock.

ːws_peaceː Fixed the shop PCs from clipping through furniture.

ːws_peaceː Added some decorative planters to the Pawn Shop inventory. Weed planted in the decorative pots is for show only, it will be completely ignored by the grow staff and give no yield on harvest.

ːws_peaceː And lastly, added a couple of longboards for cruising on the boardwalk and stuff. They should handle a little bit better than the possessed chair and can be found at the Pawn Shop.

From today, we'll start working on adding new mid-to-late-game tasks to Mission Control as well as Steam Achievements. We are currently taking suggestions for the latter, so if you got some crazy achievement in mind, swing by our discord server and drop it in the #achievement-ideas[discord.gg] channel!

Weed Shop 3
274
43
Questions for new player
1. When I set up my rolling table, used my AK-47 for my weed, then began rolling. Had enough doobies for a period. When I wanted to sell the rest of my weed of AK-47 I could not remove it from the table. 2. Grew more AK-47 to get a sale bunch and it was no where to be found, I gather going into the stash on the table. Damnit. 3. Deleted the table, sold everything hoping my stash of weed will go back to my inventory, but nope... now I have no weed or cash. So... how do you remove the weed from the table to ...
6

IcewaterCreek®
3 hours ago
General Discussions
The Cloud & Storage Update
Jun 17
THE CLOUD
So this week we had quite a few reports of save files getting corrupted or players overwriting their saves by accident, so we worked on improving the save system. at least to some extent. Here's what's been done:

ːws_peaceː From now on, each manual save will be checked for data corruption and, as long as it's not boned, will be backed up to the Cloud dir.

ːws_peaceː All the save files in the Cloud directory will automatically be synced to Steam Cloud and will be available in the Cloud Backups section of the Save/Load menu.

ːws_peaceː The autosave is also going to be backed up, however, to prevent possible loss of progress, it'll only be restored from a cloud save if the main autosave file is missing. So if you're playing on multiple PCs, use the manual save option to save and load your progress over the cloud.

ːws_peaceː And while we can't do anything about you ignoring the warning prompts and overwriting your save files by accident, we've added an auto-backup feature that'll make a copy of your main save file on an hourly basis. That way the most you'll lose is an hour's worth of grind which is virtually nothing in Weed Shop 3 terms ːws_damanː

THE STORAGE
ːws_peaceː Added a few storage room upgrades to the main shop that can purchase on the Pimp It app.

ːws_peaceː The storage rooms are basically late-game upgrades with the sole purpose of storing your weed and other worthless crap,

ːws_peaceː Fixed an issue with the PhysX engine causing the game to crash on load.

ːws_peaceː Reduced most of the lab equipment prices by up to 50%.

ːws_peaceː And lastly, fixed the rendering issues on HDR monitors... maybe. Don't have an HDR monitor to test on so let us know if the visuals still look funky on your end,

Weed Shop 3
210
35
613 Patch Notes
Jun 13
We're kicking this week off with another patch mostly focused on bug fixes and a couple of QOL improvements:

ːws_peaceː Fixed the shop tourist popularity logic. Now tourists will enter your shop when its combined popularity is at 15% or when the shop has been upgraded to a medium-sized one.

ːws_peaceː Made the new exterior wall upgrades count towards the base popularity.

ːws_peaceː Made preventative supplements stack time instead of potency since they're all at 100% anyway.

ːws_peaceː Replaced a couple of f****d up decorative item models.

ːws_peaceː Updated the Merch manager AI to prevent them from following you around when they're out of inventory.

ːws_peaceː Made the Grow staff ignore all the pots placed outside the bounds of your shop. If you already have a pot placed somewhere random, you'll have to pick it up and put it back down for the fix to kick in.

President Joe Bungulite
506 products in account
0
crypto miner
power and memory maxed out... anyone else having this issue
4

[Endgame] Simple 100% service rating with maximum profits
After about 200 hours of experience, I've derived the profit meta for Weed Shop 3. This strategy will not produce XP. The only focus is pure revenue in the late game, when there is nothing left to unlock. Let me know if my reasoning is wrong, or if there a... 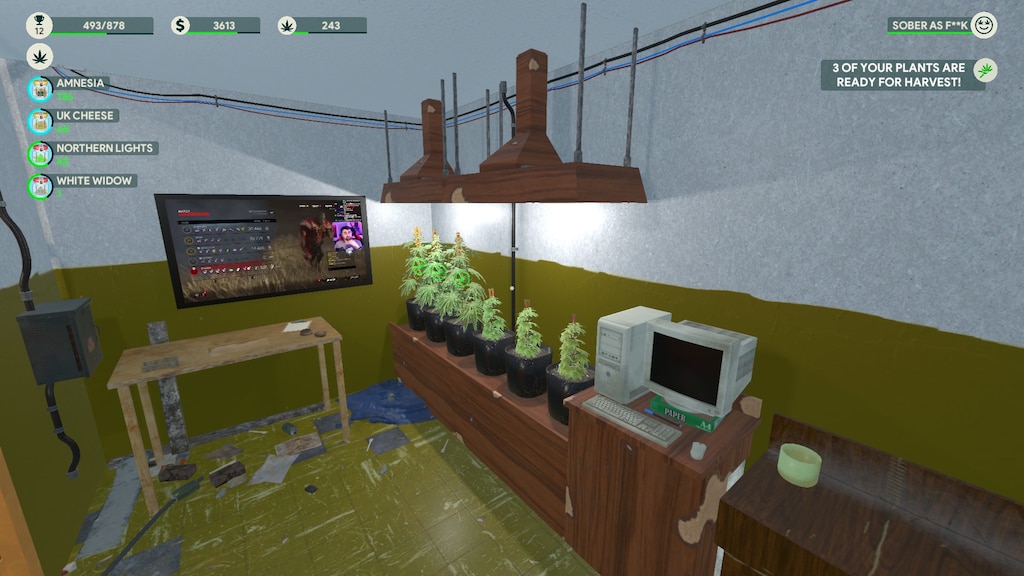 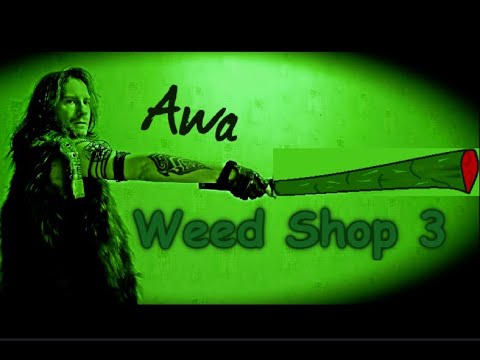 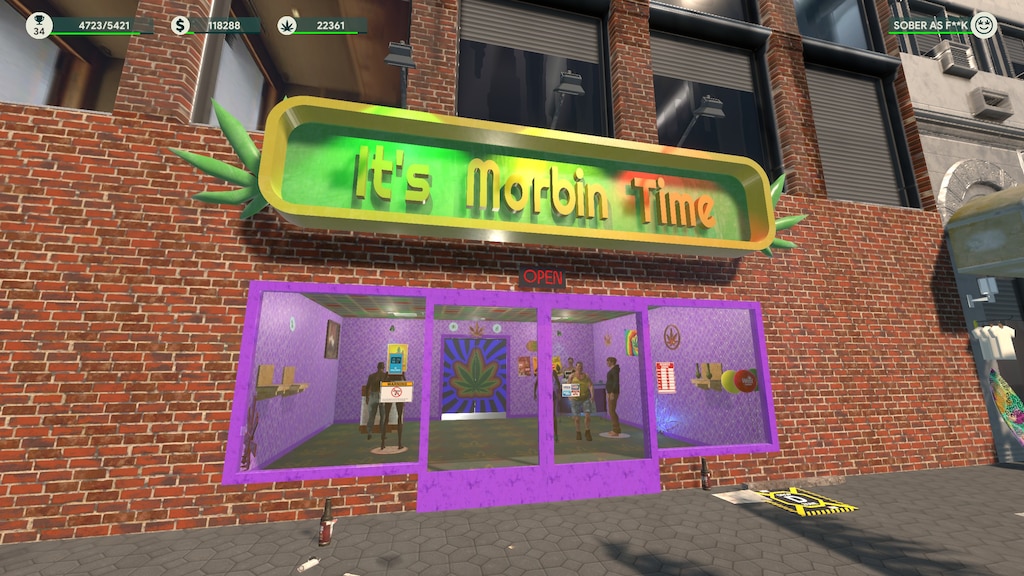 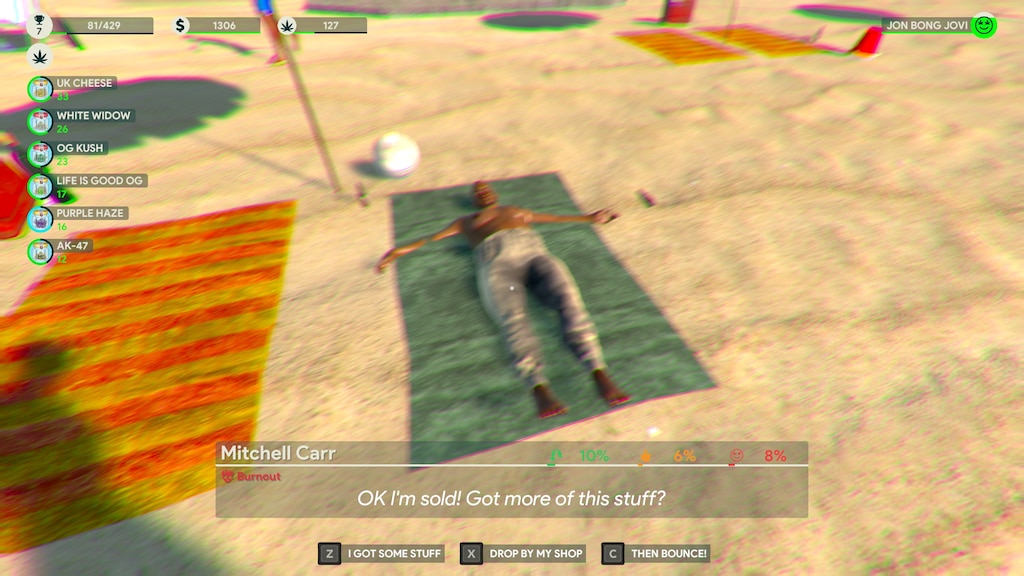 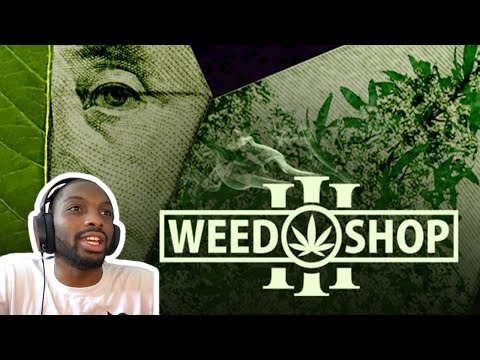 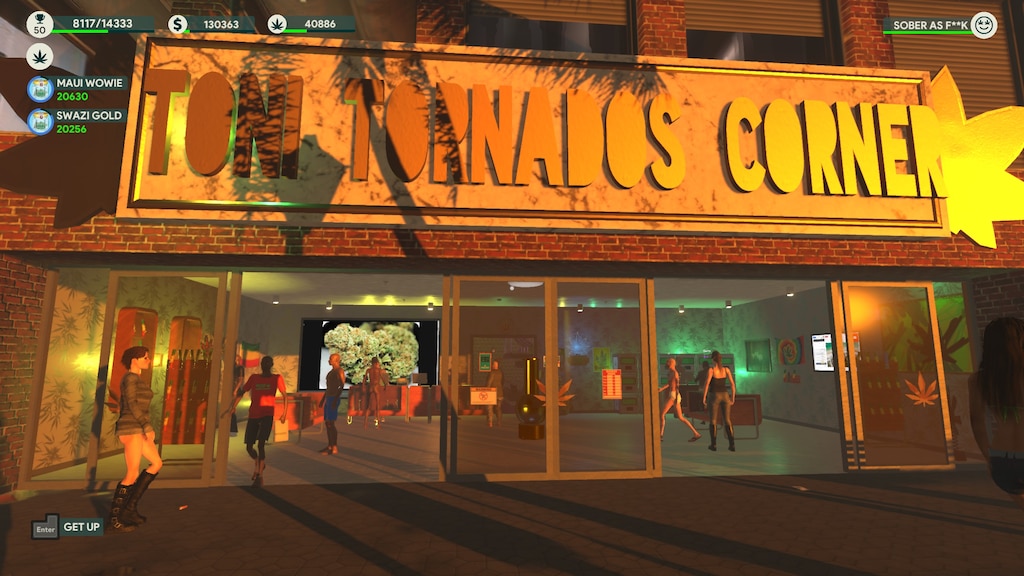 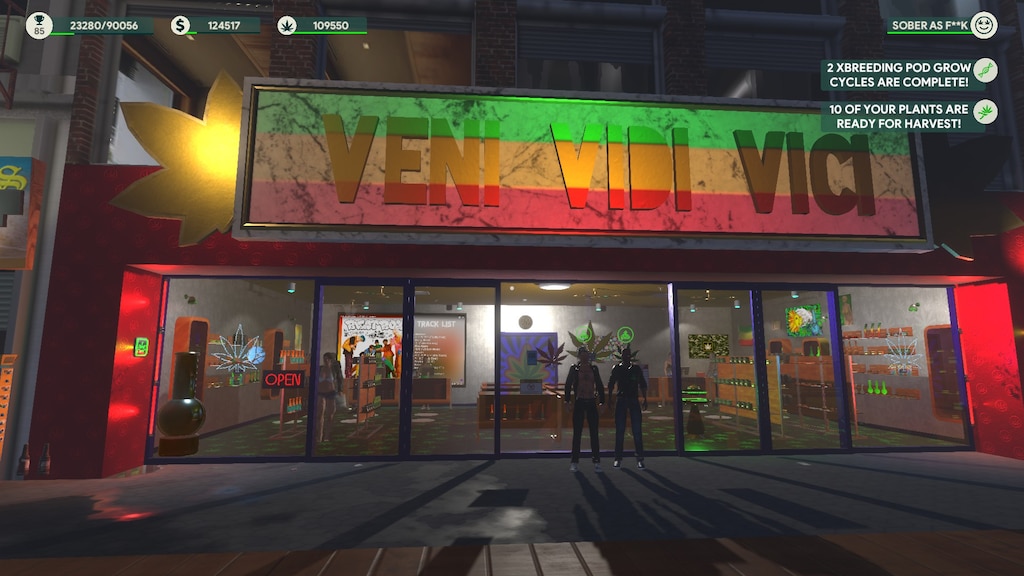 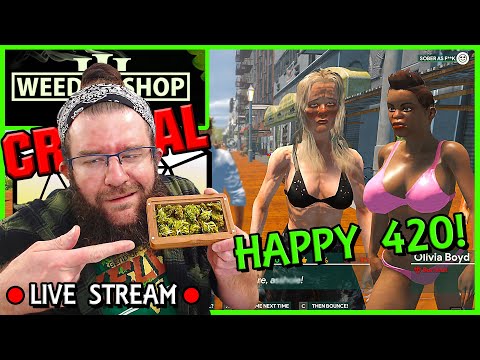 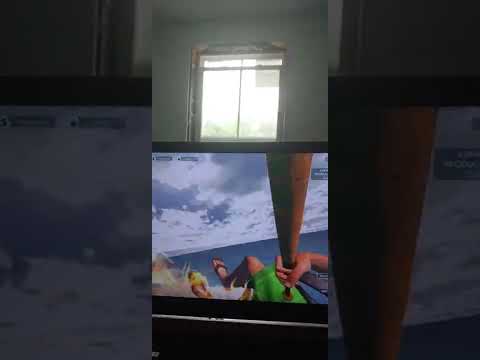 Minimap Enabled
A mod for Weed Shop 3 that enables you to minimap. 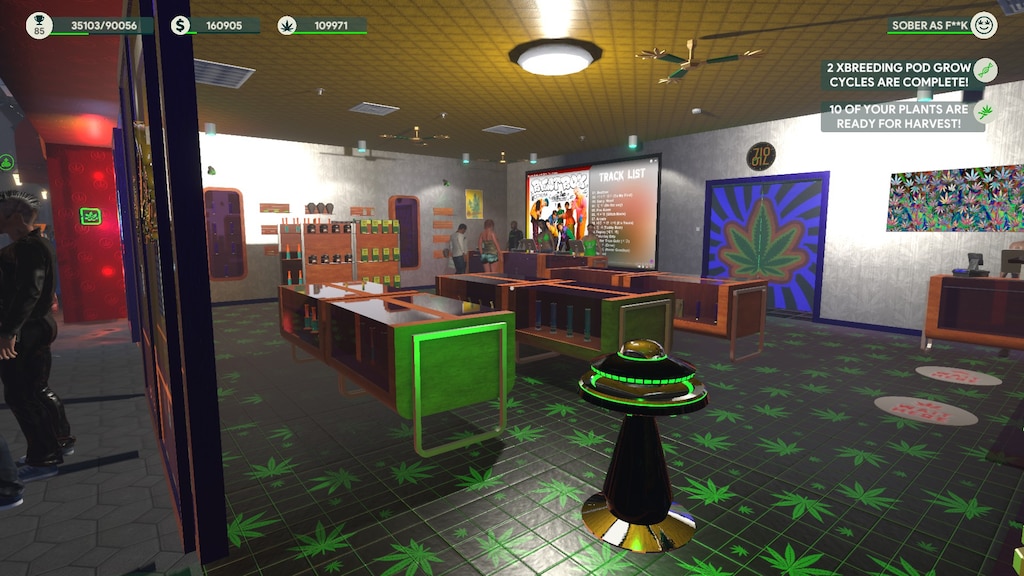 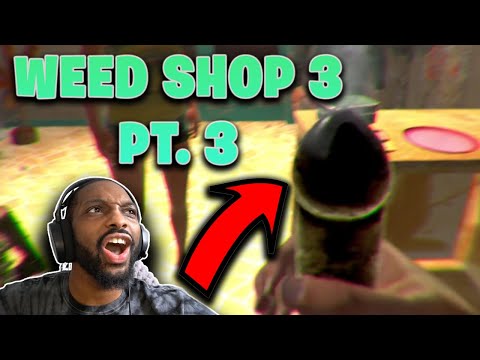 MalikChildish
View videos
Lab Pc
Where can i buy a lab pc? Cant find it
7

Warchyle
Jun 26 @ 2:18pm
General Discussions
Game crashes in loading screen of starting a new game
I have re-downloaded the game twice, updated my computer, and verified the integrity of game files. Every time I tried creating a game it would take about 5 minutes to load to 71% then stay on it for another minute and crash the game. I want to try anything I can to play it before requesting a refund....
9

Balls
13 hours ago
General Discussions
not able to continue/load games anymore
I played without issues up until lvl 12 but now everytime i try to play, as soon as i press continue my monitors go black and my pc fans go loud, still able to hear audio.. i tried updating drivers but didn't help. sad since i was enjoying the game

edit: tried reinstalling and didn't work, also tried making new save, loaded to 21% and did the same issue. still unplayable ;(...
1