A unique hybrid between turn-based tactical games and traditional, character-centric RPGs. Knight's Tale is a modern retelling of a classic Arthurian mythology story filtered through the dark fantasy tropes, a twist on the traditional tales of chivalry.
-35%
$44.99
$29.24
Visit the Store Page
Most popular community and official content for the past week.  (?)
Hotfix for Knight's Tale - v1.2.1 | June 27
Jun 27
Updates to King Arthur: Knight's Tale have been released. The updates will be applied automatically when your Steam client (in on-line mode) is restarted.

King Arthur: Knight's Tale
150
15
Best 2 Handed Knight?
Which Knight is the best? White Knight? Black Knight? Lancelot? I played Sir Keie always first, cause of the -1 point cost passive, for new abilities. I found that pretty strong. But I like sir Lancelot too. I am not sure, who is the best. White Knight sounded steretype, just with buffs. Black Knight jump, I don't know how important it is, when you have teleport per kill items?...
21

GoMeZ-T.T ™©®
8 hours ago
General Discussions
The Chained God - Content Update for Knight's Tale | June 23
Jun 23
Updates to King Arthur: Knight's Tale have been released. The updates will be applied automatically when your Steam client (in on-line mode) is restarted.

King Arthur: Knight's Tale
440
97
Reduced install size coming on Thursday
Jun 21
Knights!
One of the most requested features to be added - or rather removed - was addressing Knight's Tale's install size. We're happy to announce that after in-depth testing we found a working solution that allows us to keep the game's visual fidelity while significantly reducing install size, and it's going live with the next update on Thursday.

With this fix, the game's directory will take up nearly 60% (!!!), or roughly 70GB less space, on your disk. We achieved this by compressing most texture files so that Knight's Tale is less demanding on storage devices.

Please note that the update will be larger than a normal patch, but once everything has finished downloading and installing, the overall file size of King Arthur: Knight's Tale will decrease significantly.

Once again, we'd like to thank everyone who voiced their feedback on this matter.

See you all on Thursday for the release of The Chained God!

King Arthur: Knight's Tale
672
65
Sword in left hand
Is there a way to change this? It looks and feels extremly weird to have sword and shield in the wrong hands.
4

Tips, Tricks and Things I wish I knew at first playthrough
I have played a couple of hundred hours between EA and Beta. Here is, if not a FAQ, then things I wish I'd known if I were to start today.
66 ratings 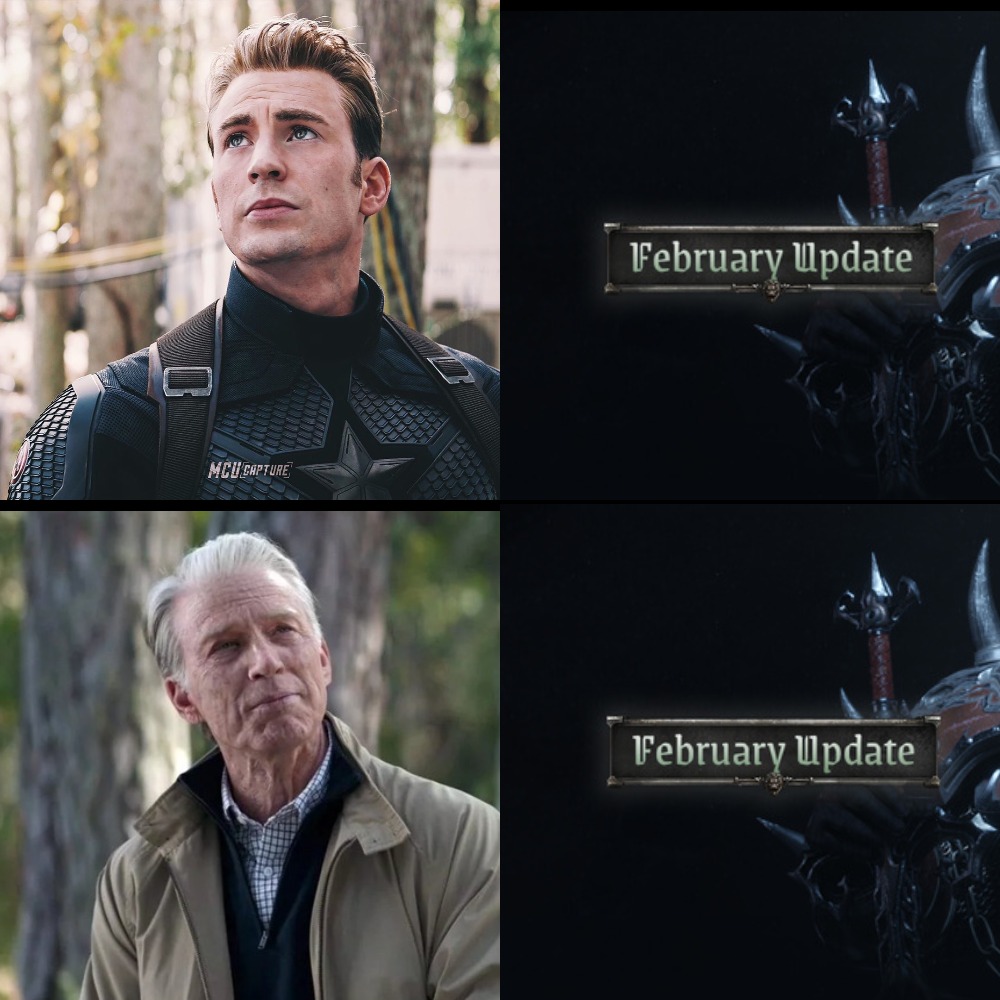 5
7
Waiting for an update 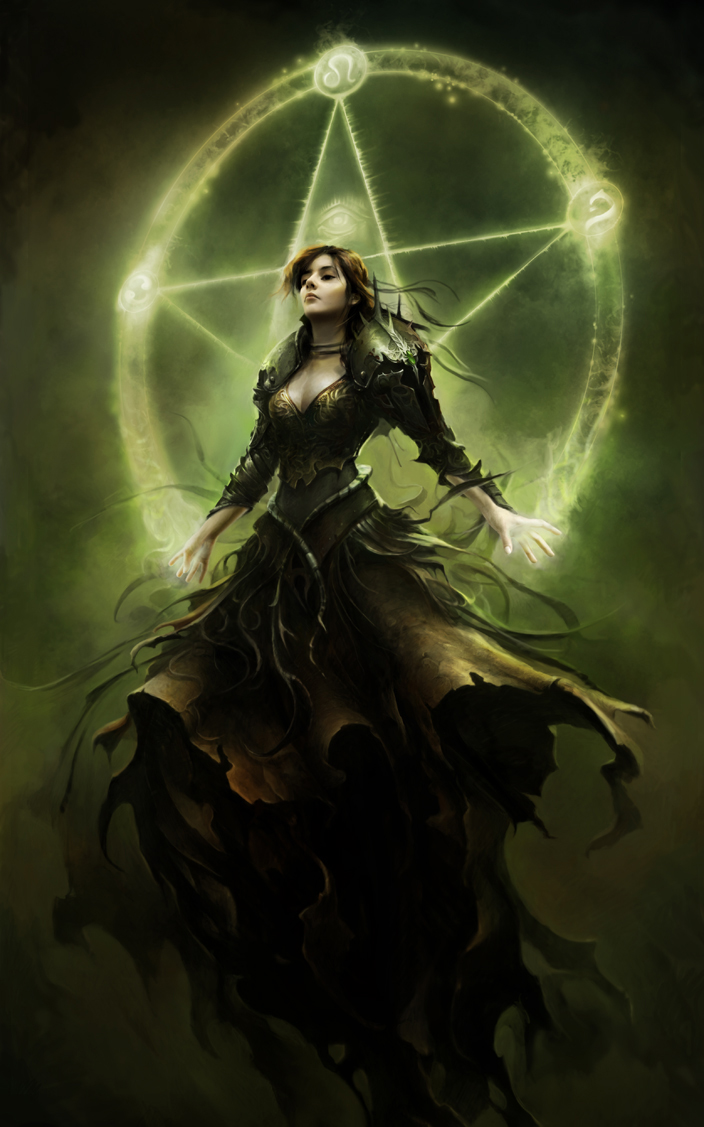 Max Ackerman
View artwork
save got softlocked?
just finished the bridge mission against sir twelyn, and only have the seelie court left, but i was healing mordred up and know hes stuck in the hospice on 0 weeks left, and i cant forcefully take him out of it - i have no earlier saves, any ideas on what i can do?...
3 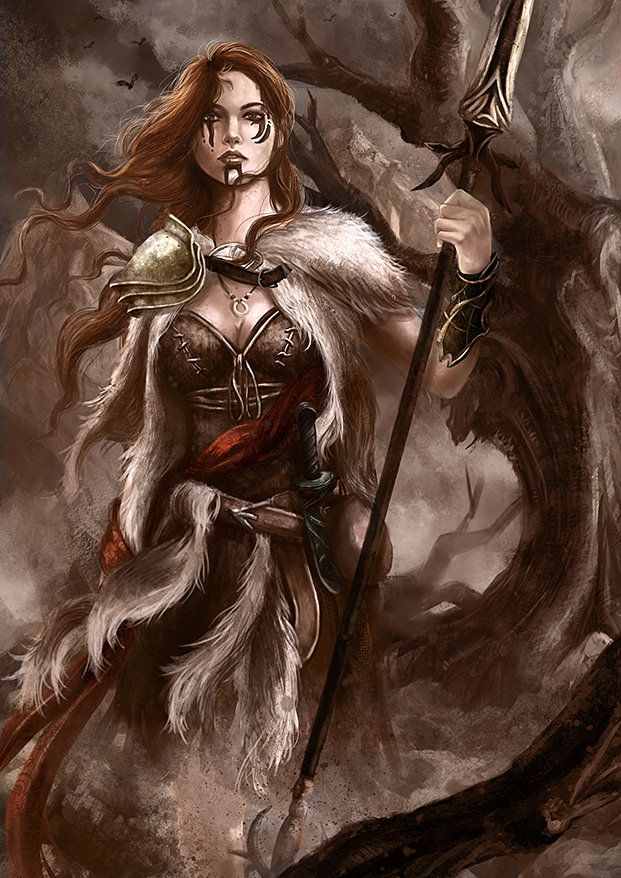 Hero Comparison by Class
At a glance comparison of heroes by class. Showing skills, morality, and act recruited With 33 Heroes in the game, and only 12 slots to fill, your going to need to make some choices about who you put on your team. But just how different are the...

Targmar
View all guides
Is it linear ?
Thx
2

Not Recommended
3.6 hrs on record
Game crashed near the end of a level where manual saving wasn't allowed, ofcourse the auto save was at the begin of that level. Wasted my time and because of that I can't recommend.

Not Recommended
87.4 hrs on record
Bug-free 0/10 - has critical game-breaking bug, the one that made me drop the game is following: enemies can't finish the turn, must be something to do with double Raven and speeding-up the animation. And it's double nasty since you can't save mid-battle and these were super-hard battles that can't be circumvented by lowering the difficulty. Feeling bad to load early and put the region aside since I cleared the rest of location. In other words you lose almost an hour of play with that bug. This is the only reason "King Arthur: Knight's Tale" gets no recommendation, even though the game is very polished and optimized.

One more battle syndrome 8/10 - strong enough to skip a bedtime.

Metagame 4/10 - global map is there only for graph-like campaign, where your decisions are very limited, could be easily 7/10 with a bit more buildings, extra easy quests for levelling and basically a bit more decision-making on a global map.

Tactics 7/10 - I've seen better tactical variety and difficulty adjustments. Extra points for some super rare but satisfying combos. Some battles feel way too puzzle-like and AI deliberately puts you in bad battle positions. It seems that the game is pushing you to specializing to combat some races differently, which is not my thing, I love having more or less universal types.

Items 6/10 - Very boring, not a lot of variety, some seem way too random and beg for a building that lets you change one of the parameters for gold. Most of various items and scrolls are useless to take a slot. So you end up getting a lot of similar looking things that do not make you excited.

Min-maxing 8/10 - very satisfying, you want to level-up your characters and keep them alive. Some skills and their progression seem useless. Some characters have way too many underwhelming skills and passives. Got my best fighter dead after healing, it seems this mechanic is not explained and you don't even get a screen on the fact someone has died and why.

Writing and story 7/10 - not bad, but anticlimactic. Nice writing, a lot of texts but not too bloated. Good voiceovers.

Region layer 5/10 - the region levels looks awesome in terms of graphics assets and variety, but doesn't offer many options for decision if the intention was a rogue-like layout. The map option is useless, doesn't show unpassable and passable way. You spend too much time going back while not having any way to speed-up the animation or pathfinding over the map or fast travel. I'm not sure about WASD controls as well. The engine and rendering for the region level is good though. Region-level design is also bad because you are constantly stuck in something that looks passable but it's not. 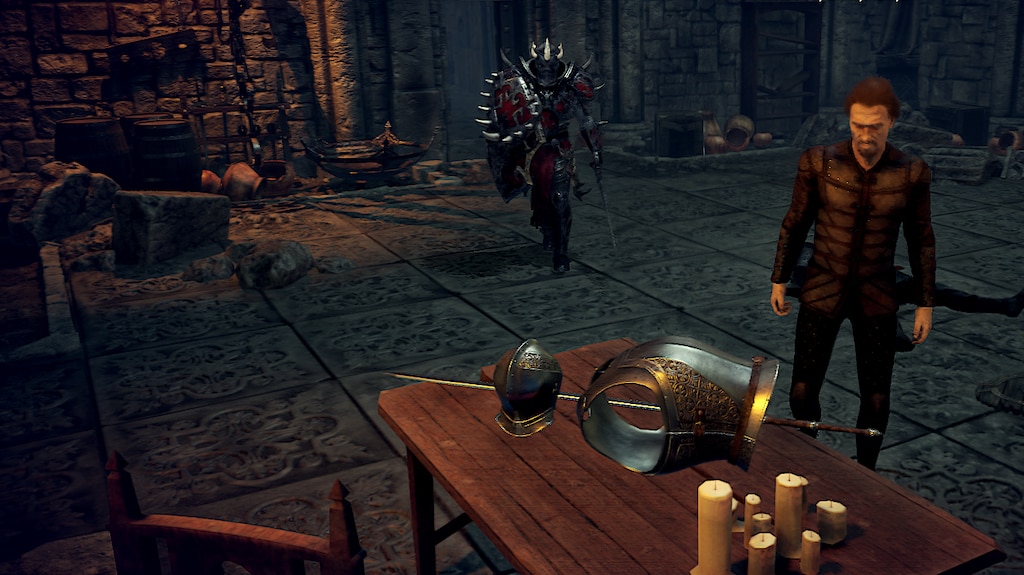 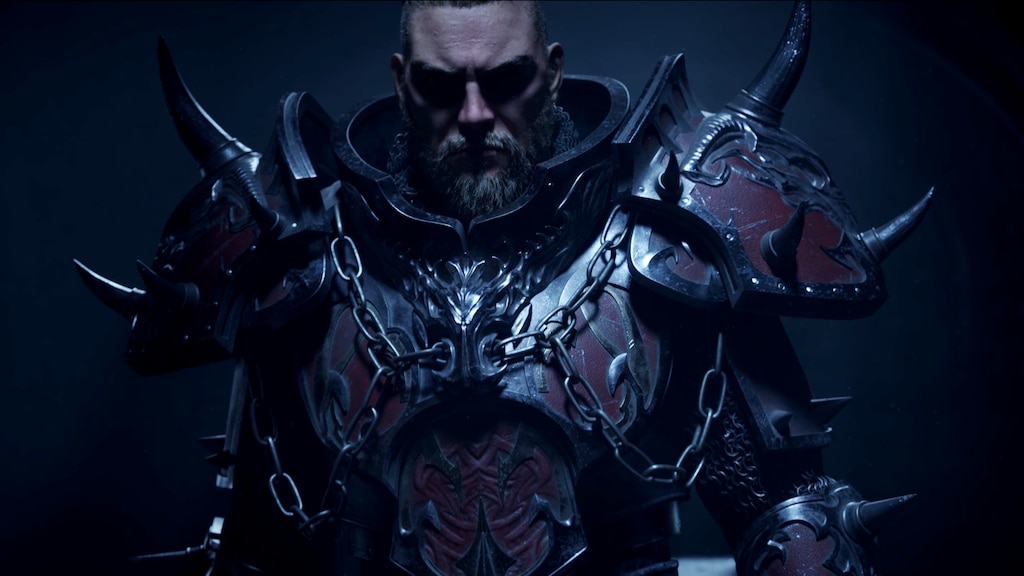 Not Recommended
100.0 hrs on record
So it's kind of weird to not recommend a game I've spent all this time on so I'll list my reasoning
TL; DR
It's medicore you should probably find a better game to spend your time+money on

So I've just finished this game on hard rougelite. Since this game borrows heavily from other titles such as divinty original sin, xcom, dragon age origins and darkest dungeon, I need to compare it to those.

Story and RPG
The story is rather lacking, mainly because you don't really care about any of the characters. The decisions in game have 0 impact on anything, you just pick any dialoge option and when you need to choose between morality, you have to go with the path you've decided (or else missions won't unlock for you in time). Here I need to compare it to dragon age, which does a great job about making you care about the characters in your party, they all have personalities and deep stories that are fun to unlock, if one of them dies or leaves/betrays you it really hurts.
What is really the worst part about the story is you actually don't understand why you, mordred are doing any of it, your just blindly following the plot even though nothing really drives you and the game doesn't explain why you are just following along, you feel like a puppet being pulled and the characters just go with it.

Rougelite Elements
So the game tries to make itself out to be like XCOM or darkest dungeon in the way it explains characters can die so be careful, but theres a huge difference, mainly you can't abondon missions, so if one of your character dies and you're unable to finish the mission (which is very probable) then you are just stuck, and if you're in ironman mode then the run is over for you. Theres also nothing to going for you if you've lost and restart, it follows the exact same story, you pickup the exact same characters, there's very little variablity and choices to affect the game.
The risk reward in this game is pretty laughable, there wasn't one time were I chose not to take the risk since the game has become too easy. (even though the rewards usually are just junk items)

Tactics and Planning
A big part of these games like DD and XCOM is planning for your mission, picking the right team with the right gear is crucial, here it's pretty pointless, you need to build a strong party, and you can take them on any mission you want it doesn't really matter at all, any item that's good will usually work and I barely played around with my gear (other than putting on the best) or party composition for missions.

Battles
Out of all the games I mentioned above (except maybe DD) the battles here require the least amount of thought. There's so much missing from other games, such as high ground, elemental effects, special enemies. The fighting style is so linear and thoughtless it feels way to grindy. Titles like XCOM and DoS did it way way better many years ago, there's no reason to go backwards.

Difficulty and Characters
So the balancing in this game is pretty bad, with some classes/characters being close to useless compared to others (so why bother taking them?), there are also some items that completly break the game (I was able to defeat the final boss battle in 3 turns). The characters are also built so badly with some skills being completley uselss and some being so strong that any character that has it turns into S tier doesn't matter what their other skills are (teleport). With pretty bad balancing most fights become just a grind fest of finishing the battle as fast as you can, and with battle rewards usually pretty useless it also doesn't even feel rewarding. 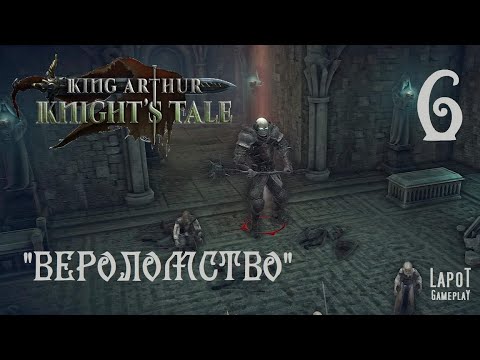 General Tips and Guidelines for Roguelite
Very general guide designed to provide players with a framework to help them build their strategy to play the game. Reviews some general tips, advice for approaching tactical battles, and a review of the defining features of classes and ways to think about... 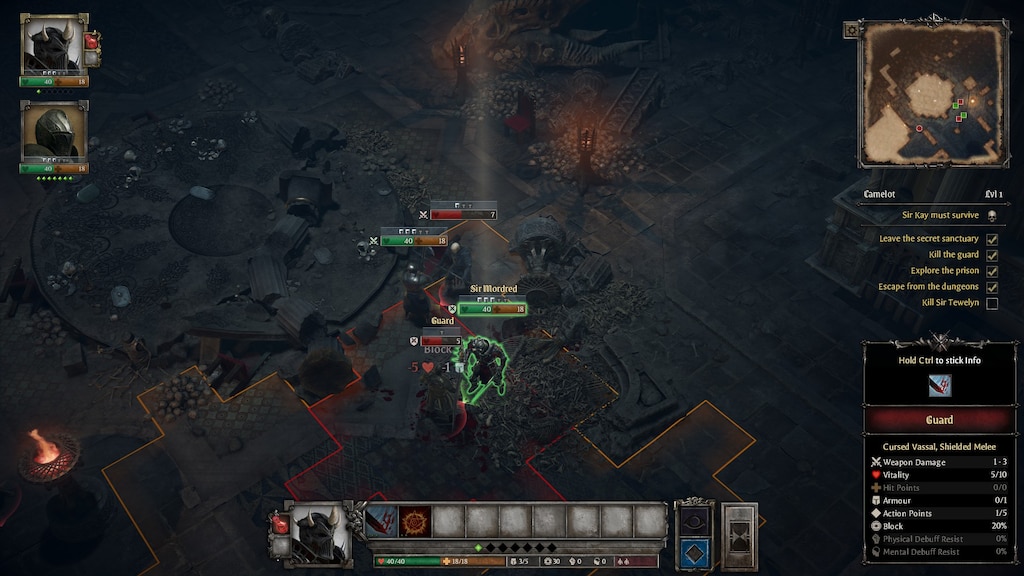 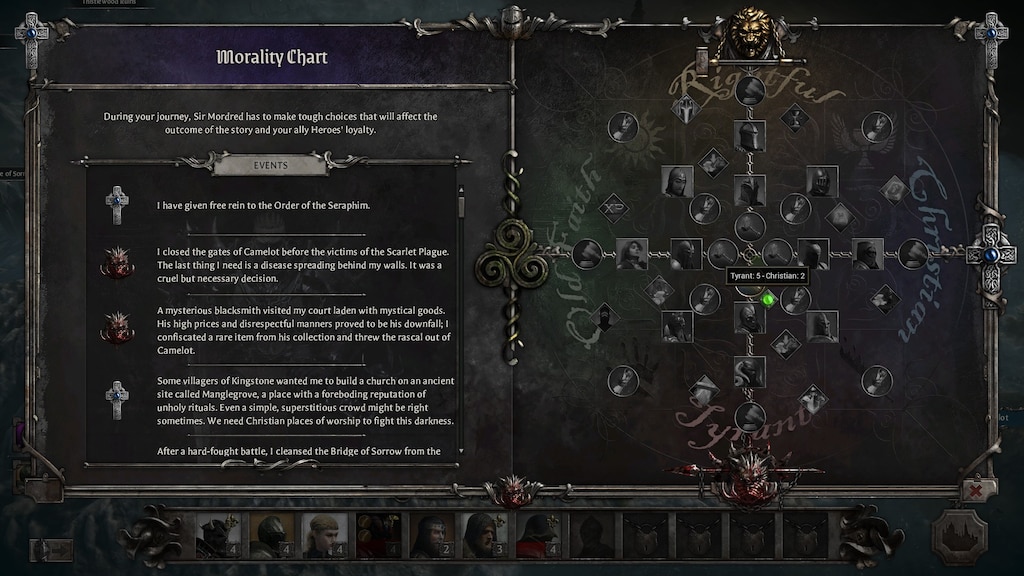 0
1
Im really enjoying this game. Going the Tyrant/Christian route or as I call it - my Supreme Court playthough. 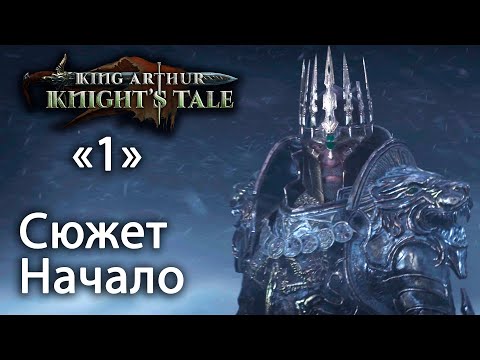 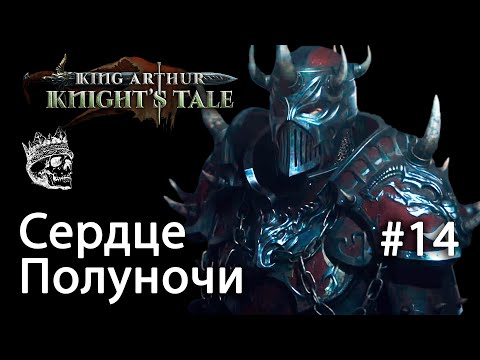 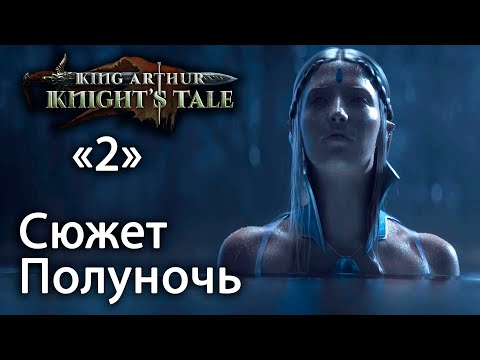 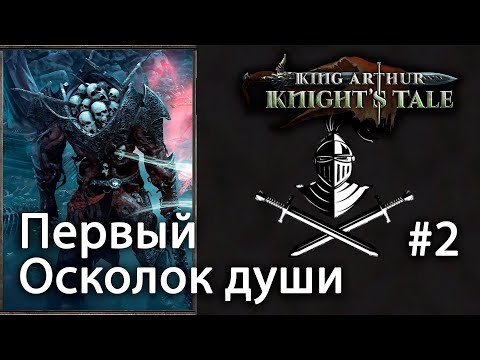 ASTekGB
View videos
omg!
The Femorian campaign is 3 times harder than the main campaign! I Really like this game, but it needs to get fixed. Normal is way to easy on the first mission (Normal) then, when you get to try and free Balor he dies before you can even save him and when you do he does nothing so he STILL dies and that's on Normal difficulty! Then as far as Hard can't even get very far at all...The main Campaign is also still out of balance imo plz try and fix, the curve goes way steep after 12-13, the many ppl that have s...
8