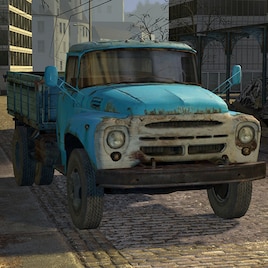 Kally
Offline
See all 1356 collections (some may be hidden)

This item has been added to your Subscriptions. Some games will require you to relaunch them before the item will be downloaded.
Description
THESE ARE RAGDOLLS.

This pack contains a selection of Russian ZIL-130 trucks with various different beds, and a semi-trailer. All models are fully ragdolled, fully bodygrouped, and are fully rigged for use with the joint tool/SFM.

All models are fully ragdolled with posable wheels, doors, hood, steering wheel, and gear shifter. All vehicles have bodygrouped cab windows and mud guards, an option for damaged or undamaged lights, and optional tire chains for the rear wheels.

The semi trailer comes with a fuel tank and some junk in the bed as standard, but everything is bodygrouped and can be removed including the sides, tailgate, and the posts to turn it into a flatbed.

This model is originally from Spintires with parts from STALKER. I have plans to port several of the other Spintires vehicles but they won't come to fruition for a while.

For people having issues with the models being stuck in the floor upon spawning, either spawn them in the air or use a no-collide world tool to prevent it from colliding with the floor. This is an issue with how Garry's Mod spawns ragdolls and not something I can fix.