Store Page
Chivalry: Medieval Warfare>  Workshop > Oilystool's Workshop
This item has been removed from the community because it violates Steam Community & Content Guidelines. It is only visible to you. If you believe your item has been removed by mistake, please contact Steam Support.
This item is incompatible with Chivalry: Medieval Warfare. Please see the instructions page for reasons why this item might not work within Chivalry: Medieval Warfare.
Current visibility: Hidden
This item will only be visible to you, admins, and anyone marked as a creator.
Current visibility: Friends-only
This item will only be visible in searches to you, your friends, and admins.
Fior-Charaid (Claymore Sword)
Description Discussions0 Comments24 Change Notes 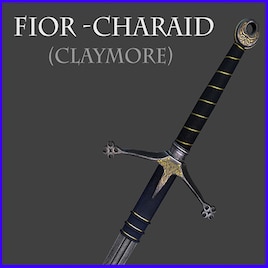 Oilystool
Offline
See all 90 collections created by Oilystool and other people (some may be hidden)
In 1 collection by Oilystool
Medieval weapons by Oilystool
22 items
Description
New Weapon Skin, Claymore Sword.

A massive Scottish Claymore sword, with a Damascus Steel blade for the Vanguard class. Weapon of the lost Highlander lord Brian McDouglas. 4474 Tris.

So I wanted to make a skin for a sword for Vanguards and the Claymore seemed like a good candidate. I wanted this new sword to look very much like a claymore, but with a twist. A Damascus steel blade claymore sword seemed like a cool idea,so i want with that theme and gave it a story.

If you like the weapon please feel free to leave a comment and future weapon skin requests.

In the Highlands, everyone knows about the legend of Brian McDouglas. It is said he vanished within the Holy Lands and was martyred for his faith. It is said when the clans of the Highlands are in their most dire need for help, that the spirit of Lord McDouglas would return to the highlands to save the clans.


Legends however, were of no importance to the current head of the clan Mcdouglas, William. The Highlanders traditional enemies to the south were planning to invade the North and the clans had to answer the call to battle. The Highlanders were outnumbered and they knew it. Two nights before the battle, the house of Mcdouglas received an unexpected visitor in the middle of the night. He was dressed in exotic garb,long traveled and had a swarthy complexion. When presented to the lord of the house,he spoke the lord's language and declared that he had traveled many moons, to present a gift, to the lord of the house. From his bag he produced a large Claymore sword, wielded by the Highlanders themselves,sturdy in its build,but strange in its decoration. The symbols were known to the Highlanders but not the artisans themselves. The blade was strange in appearance, with layers of metal interwoven to give the surface a liquid like look. The lord knew of this material, he had read books about the legendary Wootz steel blades, wielded by the Saracens of the arid lands near the holy lands. What left the lord speechless, was the traveler declaring that this was the sword of the Brian McDouglas, lost on crusade. A letter inside explained what happened to Lord McDouglas.


The family's fortunes were in decline when the lord of the Mcdouglas clan took the call to go on crusade. He hoped to win back his families fortunes in battle or die seeking salvation. 2 years he campaigned until a sun bleached,thirsty crusader army, was ambushed and destroyed. Brian was one of 8 lords taken captive, by a powerful desert Sultan. Over the years, every lord besides Brian was ransomed away and freed from the Sultan's prisons. Years passed and no one ever came lord Mcdouglas, for his family was too poor to pay the ransom. The Sultan felt pity and summoned the lord in his presence. To his surprise, the filthy and straved lord from the Highlands was neither angry or bitter at his imprisonment. The Sultan freed him out of compassion and offered to escort him to lands friendly to the crusaders. His wish was truly unexpected, lord Brian Wished to live the rest of his days in these lands, for there was only shame for him back at home and exile would be preferable. He would never lift his sword up in anger he declared to the Sultan,if he was allowed to stay. The Sultan granted him this wish and soon they would become great friends. The Sultan desiring to learn more about the lands beyond the dunes had a living source living in his kingdom and lord Bruce was happy to abide. For decades these two men from such different worlds, would share and learn from one another, forging an unlikely friendship. When Brian died one day, the Sultan mourned him and wanted to express his friendship to the lord, to house McDouglas. In his room they found his rusty, mishandled old claymore and began to nurse it back into condition. They gave it a new blade,made of the sharp,wootz steel. They embroidered symbols, familiar to the Highlanders in gold,for that is the medium they understood. The Shamrock on the sword guard was made into many crescents, along with the pommel. When it was finished, as he lay in bed at the end of his days, he sent his most trusted family member,on a journey lasting 5 years to reach the Highland and give them this sword. The Sword a large source of inspiration on the eve of battle.