Store Page
Stellaris >  Workshop > MichaelMakesGames's Workshop
This item has been removed from the community because it violates Steam Community & Content Guidelines. It is only visible to you. If you believe your item has been removed by mistake, please contact Steam Support.
This item is incompatible with Stellaris. Please see the instructions page for reasons why this item might not work within Stellaris.
Current visibility: Hidden
This item will only be visible to you, admins, and anyone marked as a creator.
Current visibility: Friends-only
This item will only be visible in searches to you, your friends, and admins. 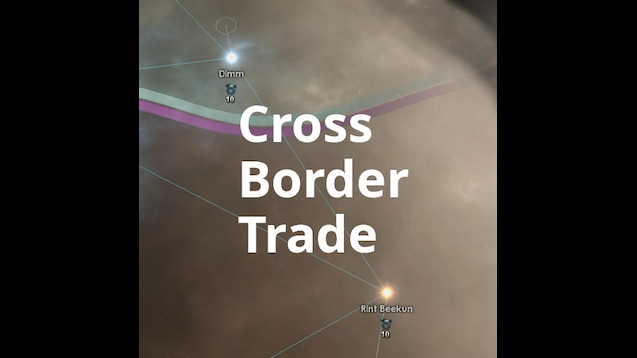 This item has been added to your Subscriptions. Some games will require you to relaunch them before the item will be downloaded.
In 1 collection by MichaelMakesGames
Michael Makes Mods

Commercial pacts too static? Shouldn't smaller empires benefit more from trading with bigger empires? This mod aims to address both of these questions.

Borders with Commercial Pacts produce dynamic Trade Value, which needs to be collected like other Trade Value. Bigger borders produce more Trade Value, and trading with bigger trade network gives you a bonus. The value will fluctuate with time and the fate of your neighbors.

Details
Another country is considered a trading partner if you have a Commercial Pact with them, they are your overlord, they are your subject, you share the same overlord, or you are members of the same federation. Gestalt empires, inward perfectionists, fallen empires, and the great khan are excluded.

Each system gets 2/5/10/20 Trade Value (depending on tech: none/Offworld Trade Companies/Interstellar Economics/Galactic Markets) added to its star, per bordering system owned by a trading partner.

A system with long-term cross border trade will get a bonus of +5% trade value per year, reaching a maximum of +100% after 20 years.

Border Trade Value is updated only at the start of each month. That means changes to Commercial Pacts, borders, etc will not update Trade Value until the next month.

This does not modify the vanilla bonuses from Commercial Pacts; border trade value is in addition to vanilla effects.

Compatibility
My Other Mods
Sharing
Feel free to update, pack, patch, translate, fork, or incorporate this mod, no prior permission required. Credit, linking to the original mod, and letting me know is appreciated!

MichaelMakesGames  [author] Jun 18 @ 1:43pm
@Manaka Nemu huh, I never checked the numbers, I just assumed the game was telling me the truth. I've made many commercial pacts that were not worth the influence in that case!

I think I'm still satisfied with the effects of this mod though, since larger networks aren't penalized, they just don't receive the bonus smaller networks do (in the first version of this mod, they were penalized and that didn't feel good). I might revisit and expand these mechanics in the future, but for now I think they're in a good place and I'm busy with other mods

Manaka Nemu Jun 17 @ 3:51am
Vanilla commercial pacts do not benefit the bigger empire more. The amount you get is equal to 10% of the trade value of the other empire. However, there is a longstanding bug where the tooltip gets the numbers mixed up. You can check this in game: when forming a commercial pact, note your current trade profits before and after. It will increase by the amount it said the other empire was getting.

ParagonExile Jun 5 @ 7:54am
This mod is one of those small, but essential tweaks the game desperately needs by default.

Sir Rolin Jun 4 @ 5:30pm
I thought that the border trade was instead of the commercial pact effect. then it makes allot more sense.

MichaelMakesGames  [author] Jun 4 @ 2:42pm
I don't want the mod to contribute too much to snowballing. In vanilla, commercial pacts benefit the bigger empire more (bigger in terms of trade). This balances them back the other way a bit. If you're getting 15 value while the other empire is getting 140, that means you're trade network is almost 10x larger!

I also think it makes sense from an in-world perspective. If they're economy is so tiny compared to yours, you should see a huge impact from a commercial pact (and you're still getting a pretty big bonus from the vanilla Commercial Pact effect).

Guess we'll have to agree to disagree. As stated in my mod description, anyone is free to make and release their own version of this mod, if you or someone else wanted to change that.

Sir Rolin Jun 4 @ 1:08pm
Btw, me and my friends (that I am talking with for playing with this) thinks that it's weird that the empire with the least trade gets the biggest bonus.

Going a trade empire with this mod, is not desireable.

From the one game I have done (the one you have seen screenshots of) it felt bad to be generating 750 trade value in my capital, just for the other empires I had commercial pacts with generating 140~ trade value for being my friend while I gained... 15~ trade value.

not that my econemy wasn't booming, but that was from 14 habitats.

MichaelMakesGames  [author] Jun 4 @ 10:34am
@Sir Rolin Mod updated with a fix! Thanks for your help!