Store Page
Planet Coaster>  Workshop > Jurre's Workshop
This item has been removed from the community because it violates Steam Community & Content Guidelines. It is only visible to you. If you believe your item has been removed by mistake, please contact Steam Support.
This item is incompatible with Planet Coaster. Please see the instructions page for reasons why this item might not work within Planet Coaster.
Current visibility: Hidden
This item will only be visible to you, admins, and anyone marked as a creator.
Current visibility: Friends-only
This item will only be visible in searches to you, your friends, and admins. 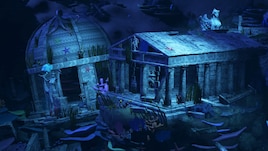 Jurre
Offline
See all 3 collections (some may be hidden)

This item has been added to your Subscriptions. Some games will require you to relaunch them before the item will be downloaded.
Description
There have been countless of myths and legends surrounding the Lost City of Atlantis, but there has been no scientific evidence found so far! Now since you are of course a brave scientific explorer, you decide to take measures into your own hands and launch an expedition!

Whilst sailing on the Atlantic a storm starts brewing! Oh no, you remember you've never learned to swim. Not a really a smart move! And then, BIEM! (BOOM in Dutch), your ship is struck by lightning, setting it ablaze. You jump overboard hoping that you will spontaneously learn how to swim!

Then a miracle happens! A current drags you down and down, but you're not grasping for air, a magic bubble seems to have appeared around you giving you the ability to breath! You start noticing ancient structures around you and realize you might have found the lost city of Atlantis! There's a whisper in your head: He or She who is pure of heart will wield the Trident and become the champion of Atlantis! Follow the guiding statues and find the crystal of prosperity. The gateway towards the Trident will open! Prove your worth in the trial of cunning and wield the Trident!

This park features custom music and a RESHADE preset! They can be found here:
https://www.dropbox.com/sh/spx8wpvz4tjonpv/AADx-rcSVcvEKPs5h046ElLWa?dl=0

Make sure no duplicate effects are active while using the reshade!
< >
10 Comments

Benutzername Jun 29 @ 2:31am
Hi. This is just meant as in Information for you.
I have made a "Spotlight Video" ( = some kind of Review / Showcase) about your creation.
Maybe you want to take a look (if you are understand german language)


Here is the Link to my Channel:
https://www.youtube.de/Benutzername1

Also you can find your Spotlight Video in the Spotlight-Playlist:
https://www.youtube.com/playlist?list=PLMVghsP2qIdwpm1XxN0Y3_8y6N6UfhVn1
It has the Number 288

Thanks for Sharing your Creation.
So. now, feel free to delate this comment. Was just meant as an Info for you.

Rice Jun 24 @ 9:21pm
Finally getting around to commenting on this! Great job, Jurre - it looks so good. The blues and the deep sea coloration on everything, the maze, the statues - I love it all!!!

SmilingGrandma333 Jun 20 @ 10:40am
It's no wonder why you're a Legend in our community. This is a work of art! Once I get more points I'll come back and give this an award. :D