Store Page
Kenshi>  Workshop > Missile's Workshop
This item has been removed from the community because it violates Steam Community & Content Guidelines. It is only visible to you. If you believe your item has been removed by mistake, please contact Steam Support.
This item is incompatible with Kenshi. Please see the instructions page for reasons why this item might not work within Kenshi.
Current visibility: Hidden
This item will only be visible to you, admins, and anyone marked as a creator.
Current visibility: Friends-only
This item will only be visible in searches to you, your friends, and admins. 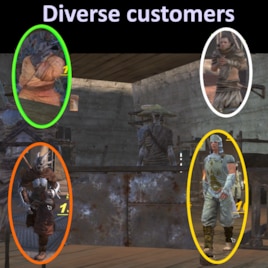 Missile
Offline
See all 42 collections (some may be hidden)

This item has been added to your Subscriptions. Some games will require you to relaunch them before the item will be downloaded.
Description
(Use machine translation)
Requires a import.
Requires a import
日本語解説はスレッドで行っています。
この説明文の下部をご覧ください。

-This mod does not add new characters, squads, items, dialogs.
So strange English will not be added to the game.

There are various shopping mods in this game.
But I was not happy with them and created this mod.

I created this mod to solve the following issues
“In a few days, resident's money will run out and it wo n’t recover”
→Endless Shopping
“Only some characters do shopping”
→Diverse Consumers
“I sell trash instead because they don't buy expensive things”
→Sale of Expensive items

[MOD Characteristic]
1.Does not destroy game balance (does not cause inflation)
Aimed for a natural and continuous economy.
The focus was on role play as a merchant, rather than simply making big money.

2.The residents' funds will never run out
They now have almost unlimited money (Players can't take it away)
Of course, They don't buy all the products in the store at once (no inflation occurs)
Make a small purchase per day, controlled by probability.

3.Diverse Consumers
Gatekeeper Paladin, town guard Samurai, HQ Gang,Shop Guard(etc) also go shopping
At a designated time, they take a break from their original work and go shopping.
When they are satisfied with their shopping or after two hours, they return to their original job.
However, important NPCs do not go shopping.(Gatekeeper leader, shopkeeper, Emperor Teng, Phoenix, etc)
Nobles go shopping, but their escorts do not leave him.
There should be no problem with town security.

4.It is your benefit to arrange high quality items
There is no limit to the purchase price.
There is no need to place dried meat instead of meatrap.
Line up high quality weapons instead of picked up scraps.
In this mod, economic balance is controlled by probability rather than amount.
For example, the probability of a Citizen buying weapons is only 1% per day. Even Soldiers are 4%.
For Food, it is about 10-25%.
It ’s important to take advantage of fewer opportunities.

[Settings made]
Each character's shopping list and money (1 billion) has been set.
In many cases, the lists conforms to NPC class such as Citizen and Militaly.
It is also influenced by factions and races.
(HN people have a lower probability of buying Alcohol than UC, a little more likely to buy food...etc)
The store guard pays for the goods from the store funds.
This is not infinite, but it will recover over time (game specification)
Shopping AI was set for each Squad.
A shopping time of about 2 hours in the daily schedule was set.
Nomad Merchant Caravans now have items such as animal skins, meat, and a few Leviathan pearls. This is the setting they need to have money.
They never sell it, but it is possible to rob them.
Hashish internal item category has been separated from Alcohol (does not affect normal gameplay)
HN people buy alcohol but not Hashish.
SW people are very rare to buy Hashish. Because they produce it by themselves.
Some AI fixes. It's a small fix for the NPC stop, no major changes.

[Lists available at shop counters and rough probabilities.]
Take a look at some examples that are illustrated with images.

Wandering trader buy a lot of things with a high probability.
Wandering trader are Caravans, Bounty Hunters, Wandering Assassins,Mercenary and more.
However, this mod does not make any changes to increase their total number.
If you want to open a shop in the wilderness, it should be a place where many people pass.

[Non-Settings made]
-Not set for the character in the Bar and UniquePC(created as a patch)
However, UCHero goes out shopping at midnight with the effect of this mod.
-Thief guild
-Setting for police station and slave shop (Setting is possible, but there was a problem)
-No setting for Hive in village(HiveLess,Caravan Boss do shopping). Respected the race background.

-As time goes by and NPCs make a lot of shopping, their inventory fills up.
Then they will not be able to go shopping.
The only way to avoid this problem is import. However, introducing a item patch can mitigate the rate of fullness.
If you don't want to import frequently, I recommend introducing patches.

Conflict with other mods
If you use this mod in conjunction with other shoppingAI mods, your NPC may be extremely likely to buy items.
Regarding shopping time, the mod set at the bottom of the list will take precedence.
Mods that increase NPC store money and assortment are compatible with this mod.

I don't like changing too many things in one mod, so I created a patch.
I apologize for having occupied the Steam list with many patches.

-Not included in "all in one"-
Fun merchant life Patch(AI)
-Fixes a small AI issue found while creating a mod. Should reduce NPC outage issues.

Fun merchant life Patch(Caravan)
-Increase caravan possession from about 5,000 to about 25,000

Missile  [author] Mar 15 @ 6:35am
As for "no places in stock", you can only import the game or do business in another town.
Weapons and armor are bulky and will inevitably cause such problems.

About "not enough gold", I think it is caused by interference with other MODs. In this mod, the consumer has unlimited money and this message should not normally appear.

If it is your gatekeeper that is displaying this message, it may be a known problem.
This problem occurs when NPC is added to the gatekeeper by another MOD.

For details, see [Known issues (such as MOD conflicts)] in the explanation.

[Ger]❄Eiselfin❄ Mar 15 @ 6:18am
never mind, i have removed the mod and many others where it is said to buy npc weapons and armor. weapons and armor sellers were not bought for all mods that i have tested for several real hours. npc statements "not enough gold" or "no place in the inventory". since i have tested several at the same time i can't say if these npc statements were referring to your mod or to others.

Missile  [author] Mar 15 @ 4:52am
First of all, the odds of buying weapons and armor are fairly low.

If probability is not the cause, it is likely that their inventory is full of items.
In this case, it will be displayed as a character line.

If you elaborate more, I could mention other possibilities.

[Ger]❄Eiselfin❄ Mar 12 @ 8:54pm
do you buy the guards only kingdom specific or everything? after 3 days my katanas and samurai armor set are not sold in shrek kingdom

Missile  [author] Dec 27, 2019 @ 11:59pm
(Use machine translation)
I don't think there will be any big problems with introducing both mods.
However, it is a MOD that changes the same place, so you need to pay attention to its priority.
If you want residents to have unlimited money, list my mods below.
Then import the game.