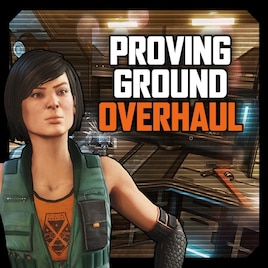 Hotl3looded
Offline
See all 1601 collections (some may be hidden)
You need DLC to use this item.

This item has been added to your Subscriptions. Some games will require you to relaunch them before the item will be downloaded.
Description
OVERVIEW
This is my take on eliminating experimental projects from the game and making everything buildable in the Engineering Bay. I hid all experimental projects and added a bunch of new projects for each item.

The basic concept of this mod is that Proving Ground projects are one time deals that require Elerium Cores to research and unlock the items. Once unlocked, you can build the items in the Engineering Bay. The projects themselves don't give items, they act like the autopsies or Bluescreen Protocol.

FEATURES
All project times/costs and item costs/resell values can be edited in the config file (you can add or remove anything, even corpses).

Grenades and Rounds
To mimic the Bluescreen Protocol concept, I added the three following projects:
The other Rounds (AP, Talon, Tracer) are unlocked by doing their respective projects. Those projects are available as soon as you build the Proving Ground.

The configuration file should be in the following location:
<Your Steam Install> \steamapps\workshop\content\268500\1372437219\Config\XComProvingGroundOverhaul.ini
If you like this concept, you should also check:

TODOs
COMPATIBILITY
This mod hides all vanilla experimental projects. Any other mod that relies on those projects won't work as intended.

It should be safe to add/remove mid campaign.

nekus May 23 @ 9:16pm
Edit; it has nothing to do with this mod, it was aanother mod where thw author "has forgotten" include the nedeed entries into xcomgame.int, so I got sloppy authorness

nekus May 23 @ 2:06pm
After finishing PG building I can not build anything at engineering , I have a bunch of projects in PG without name or descriptionion and my soldiers have nothing to equip, no primary, no secondary, no utilities, nothing

King Babu of House Santana May 13 @ 6:34pm
Any modder wants to take over this mod?

DragonKingAbashī Mar 23 @ 6:07pm
Unfortunately, the mod might be abandoned at this time. By all accounts, Hotl3looded has not been on for quite some time (as noted in an earlier post). Therefore, you might have to wait for someone else to pick this mod up or accept it as it.

Bardmaster Mar 23 @ 5:53pm
And another bug report (but I'm wondering now if this is an abandoned mod?):

This also removes these weapons from your available items. When I completed Shredstorm Cannon, my existing shredder guns disappeared! Not cool.

Bardmaster Mar 23 @ 5:47pm
@Hot3looded a bug report: After building Shredstorm Cannon, they disappear in your list of items you can create in Engineering. This happened whether I built them right away or didn't.

Speaking of which, any item built in the Proving Ground should have at least one prototype built and available for immediate use, but this doesn't seem to happen with any of the projects with this mod. Kindly advise on that as I love this mod but it's breaking a lot of things right now...

Bardmaster Mar 23 @ 5:15pm
@Piotr Psi Armor is not impacted by this mod. I can build it in the Proving Ground. As the mod desc. says you just need to research Psionics and Powered Armor.

This mod only seems to restrict items that are created from one of the randomly-dispensed "Experimental..." projects.

Piotr Mar 22 @ 7:28am
Bug report: "Suit Up" resistance order doesn't seem to affect vest projects.
And since @Bardmaster is asking for stuff, can you also include Psi Armor?
https://steamcommunity.com/sharedfiles/filedetails/?id=1511763111&searchtext=PSI+armor