Store Page
Total War: WARHAMMER >  Workshop > Den's Workshop
This item has been removed from the community because it violates Steam Community & Content Guidelines. It is only visible to you. If you believe your item has been removed by mistake, please contact Steam Support.
This item is incompatible with Total War: WARHAMMER. Please see the instructions page for reasons why this item might not work within Total War: WARHAMMER.
Current visibility: Hidden
This item will only be visible to you, admins, and anyone marked as a creator.
Current visibility: Friends-only
This item will only be visible in searches to you, your friends, and admins. 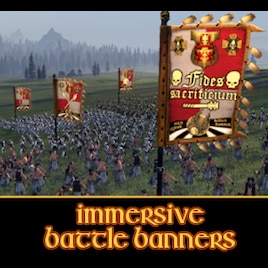 Den
Offline
See all 1255 collections (some may be hidden)

This item has been added to your Subscriptions. Some games will require you to relaunch them before the item will be downloaded.
Description
For more realistic and immersive banners during the battles. I didn't like the toy aspect for vanilla banners. Now it's feels "Warhammer" ! I have also modified some colors which were too saturated (with keeping the vanilla theme), and used color to improve the visibility :

WARNING! If you use another mod who change also the factions color, you can lose on the visibility of unit icons.

- Wood Elves, the Rune on the banner represent Kurnous and Isha together (the 2 main Elfic Gods), wrote in Fan-Eltharin, the Warhammer Wood Elves language.
Re-work on the Emperial banner, and some icons (cairn wraiths, fell bats, banshee, flagellants, steam tank).

- Chaos with blood, skulls and the 4 Warhammer Chaos Gods Runes. The Dragon Ogre banner use the Chaos Rune representing them, and 2 major elements in their lifes : mountain and thunderstorm with lightning (giving power to these immortal creatures). Greenskins banner reworked, some icons improved (Empire Captain and Witch Hunter, Boar Cavalry, Monstrous Infantry).

- Beastmen, with Warhammer Chaos Runes on the banners. And re-work on some orc icons (doomdiver, boar, wolf and squig cavalry).

- Empire (Tilea, Kislev and the Border Princes share unfortunately the banners with the Empire, special détail in the Emperial Banner was possible only for Marienburg).
- Estalia.
- Dwarfs.

And if you want a mod for huge armies, massive and epic battles, you can try my other mod : Impressive Armies and Battles.

logos411 Jan 29, 2019 @ 1:33pm
For some reason the mod is not working at all for me, though it's downloaded. I have no other mods installed that might conflict. Any ideas what might be wrong?

Den  [author] Jan 3, 2019 @ 1:38pm
Yes Willelmus it's sad, but we cant have true flag regiment in WTW. That why i did this mod, trying to have the closer feeling to "flag regiment", i cant do better with the game limitation.

Willelmus Jul 19, 2018 @ 9:39am
Is there no way to add guys with flags like Empire and Napoleon TW had? It feels strange, really. Empire had great flag physics.
< >