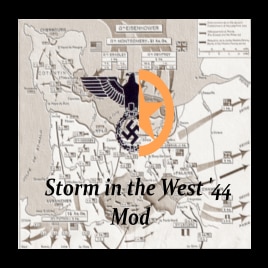 Minnus
Offline
See all 32 collections (some may be hidden)

This item has been added to your Subscriptions. Some games will require you to relaunch them before the item will be downloaded.
Description
This mod strives for realism and tries to be as close as possible to the real life stats of the units displayed, as well as the orders of battle of the different forces engaged in that fateful battle. All the changes are made in that direction, trying to achieve both balance and realism. Note that the mod is firstly made in the direction of Multiplayer games.
The mod is now in its final installment and will not be updated again.

Many thanks to Panzeh for his videos he made about the mod. His channel : https://www.youtube.com/user/PanzehVideos

Join us in our Steam group to find other players and plan some games : http://steamcommunity.com/groups/storminthewest !
We have created a Discord server as well, so you can gather and organize games : https://discord.gg/q6FNkqr

Support us with paypal : https://www.paypal.me/MrCrisps

IMPORTANT NOTE TO NEW PLAYERS : With the divisions overhaul, the Battlegroups from vanilla are not compatible with the mod, thus being deleted by the game when using the mod. To avoid that, either export your vanilla BGs in a text file before activating the mod. You would be able to import them later when you'll switch back to vanilla. See the topic "How to avoid the BG swipe when switching from vanilla to the mod (or the opposite)?" to know more how to counter that.

Rhedd and Ginda from No Glow and Sound & Music Mods have associated with us to give you a more authentic experience.
No Glow Mod by Rhedd : https://steamcommunity.com/sharedfiles/filedetails/?id=944223734
Sound & Music Mod by Ginda : https://steamcommunity.com/sharedfiles/filedetails/?id=952081957
Big thanks to Zalteredbeastz who allowed me to use it's genius idea of forcing the corpses of infantry stay on the field.

What's different from the vanilla version ?

- New Sounds for all weapons and almost all units ingame. A lot of them are used under licence thanks to the generosity of Boris, from Boris sound Mod for War Thunder.
Thanks so much to him for allowing us to use his work for Steel Division.
If you want to know more about Boris and his awesome contributions, check that link :
http://www.moddb.com/mods/b0riss-sound-mod
Some of the new sounds come from the work of Ginda.
The planes engine sounds are used with the generous authorization of Automne & Villys :
https://steamcommunity.com/sharedfiles/filedetails/?id=949663803&searchtext=

- The musics have been replaced with more authentic marches and songs for all the divisions.
Here is the playlist :

If you liked those marches and songs, you can download all the soundtrack here : https://www.dropbox.com/sh/ywn8n2o8kllbtza/AAChpltSA0X5xbC3CNkH34gVa?dl=0.

- All the cannons have seen their Rate of Fire, aiming time and dispersion values to represent their real counterparts.

- The HE values of the weapons have been adjusted to multiple parameters such as : caliber of the round, rate of fire, quantity of explosives and type of explosives.

- All the speed values be it on road or cross-country have been adjusted to their real life values. Yeah, the Churchills are snails, I know.

- All the AA weapons have received AP rounds but in low quantity (around 1/4 of their HE rounds). The AP value varies from the calibers.

- All the units equipped with .50s have received AP rounds. It's not great at max range but is a great threat to any light armor at close range.

- Some low caliber AT guns are now able to fire HE rounds, as they were in real life. That's notably the case of the Pak38, the PaK37 or the 37mm M3.

- Some units have received APCR, HVAP, APDS or HEAT shells, but in really scarce numbers. They're really powerful but need to be used smartly to unleash their full potential.

- The accuracy and dispersion values have been adjusted for all weapons, taken into account multiple factors such as quality and level of zoom of the optics and the velocity of the shell.

- All the costs of the units have been modified and adjusted to be somewhat balanced. Don't hesitate to tell me if you think something is fishy. I don't bite.

- The Off-Map Artilleries have been tweaked a lot. Now limited to only one use for each kind of barrage, the Off-Map arties are way more powerful than before, but it comes at a huge cost. Use them smartly and they could really change the tides.

- Addition of new traits such as Waffen SS, German reserves, Allied Airborne or Experienced Crew to be fairer with veteran and elite units. Those can surely have a great effect on the gameplay and better differenciate rookies from experienced ones.

- The Stars and their effects have been completely reworked and is entirely different from vanilla. The stars are now a boost to morale only.

- The Spotting system has been entirely reworked. The Binoculars and the Double Time orders have been introduced. Lastly, tanks can now use smoke shells or smoke launchers.

Thanks for reading and enjoy your time on the mod ! See you in the game !

Lt. Ruben (AUT) Apr 23 @ 5:24am
any reason why the jumbo has completely unrealistic armor values? Is it a balance thing to give the allies something with thick armor all around or just a patriotic thing?

There is absolutely no historical reason to give the jumbo a rear armor of 9 (more rear armor than a Stug3 has front armor in this mod??) even though it had literally no modification to its rear compared to the standard M4A3 sherman models.

TalvisotaRUS Mar 22 @ 3:56am
how to remove zombies, with your mod I can't choose anything but zombies

sergio_collina91 Nov 8, 2021 @ 1:49pm
How is possible add more division to the Scenario instead have only zombie?

Sokol88 Nov 6, 2021 @ 6:09pm
this shit kind of sucks, AI just cheats instead of actually being smarter/harder. bombs units barely out of my spawn in phase A, no way they could know they were coming