Greenlight > Games > franfistro's Workshop
Greenlight is being retired. For more information on how to submit games to steam, refer to this blog post.
This item has been removed from the community because it violates Steam Community & Content Guidelines. It is only visible to you. If you believe your item has been removed by mistake, please contact Steam Support.
This item is incompatible with Greenlight. Please see the instructions page for reasons why this item might not work within Greenlight.
Current visibility: Hidden
This item will only be visible to you, admins, and anyone marked as a creator.
Current visibility: Friends-only
This item will only be visible in searches to you, your friends, and admins.
Unepic
Description Discussions14 Announcements7 Comments2005 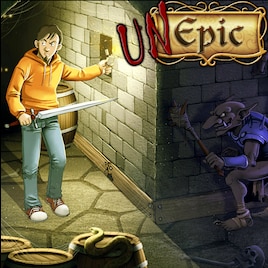 franfistro
Offline
See all 209 collections (some may be hidden)

View Unepic in the store

Unepic has been finally released.
You can find it here:
http://store.steampowered.com/app/233980

Unepic is a combination of platforming and role playing games. There are many hilarious references throughout the game. The game takes place in Harnakon, a huge medieval castle. It is set in the hardcore NES Style, yet refined with the latest features. This makes Unepic a very unique game.

In the castle, he will be possessed by a shadow, however this shadow cannot control him (being able only talk). The only way of the shadow to escape from the Hero’s body is by the death of the Hero, so the shadow will lie all the time giving false clues always looking for the Daniel’s death.
In the castle he will visit an oracle and find out what’s the goal of the story: to kill Harnakon, the master of the castle, and free Pure-Spirits. This story sounds typical for a role game, but during the adventure Daniel will discover that everything is not what it seems...

Unepic has been Greenlit and is now listed in the Steam store. For the latest information, purchase options, and discussions for Unepic, please see it on the Steam Store or in the Steam Community.
Visit Store Page
For more details Visit Community Hub
For latest discussions
If you really, really want to, you can continue to the Greenlight page. Information on this page may be out of date, since all the action has moved to the areas noted above.