Greenlight > Games > Marek Rosa's Workshop
Greenlight is being retired. For more information on how to submit games to steam, refer to this blog post.
This item has been removed from the community because it violates Steam Community & Content Guidelines. It is only visible to you. If you believe your item has been removed by mistake, please contact Steam Support.
This item is incompatible with Greenlight. Please see the instructions page for reasons why this item might not work within Greenlight.
Current visibility: Hidden
This item will only be visible to you, admins, and anyone marked as a creator.
Current visibility: Friends-only
This item will only be visible in searches to you, your friends, and admins.
Miner Wars 2081
Description Discussions5 Announcements6 Comments1134 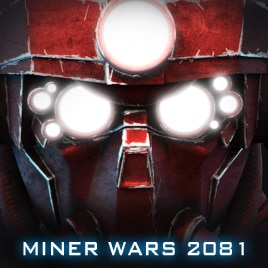 We are happy to announce our new game “Space Engineers”.

In-game alpha video and more information can be found at http://www.SpaceEngineersGame.com

More details about the decisions that led to this project and its development can be found at http://blog.marekrosa.org/2013/09/space-engineers-announced-development.html

Miner Wars 2081 is a 6DOF action-survival space-shooter simulation-game set in the year 2081, 10 years after the destruction of all planetary objects in the Solar System.

You operate an advanced mining ship in a fully destructible and open-world environment, which remains persistent as you complete missions or play online with others. Realism and survival are key aspects of gameplay. Inventory and the way you use resources such as fuel, ammunition, oxygen, ore, and weapons are important when surrounded by dozens of warring factions.

The gameplay is driven by an epic story and offers a choice of single player, co-op, and death-match multi-player.

The story will introduce you to many types of missions: rescue, exploration, revenge, base defense, theft, transportation, stealth, search and destroy, pure harvesting, racing, or just flying around and destroying everything you see.

Gameplay time: about 15 hours of straight game play, but could take you much longer considering the free-roaming / sandbox gameplay, in-game editor and multi-player

“It dawns on me that I'm playing a modern-day Descent, and it's awesome. And the way my ship floats through the station's corridors felt right -- Miner Wars 2081 totally nails the physics of inertia. ” - Mike Nelson, GameSpy

“Digging through tons of beautifully rendered rock is strangely exciting…. While I could spend all day digging, there’s an actual game here as well. A game with many scripted missions to play through by yourself or with the aid of a hired friend. A compelling game made even more so by the fact that the enemies you face will have to figure out how to deal the constant changing of the structures they inhabit.” – Mike Fahey, Kotaku

Deepfried Pizza (Techi) Aug 14, 2014 @ 8:15am
I still missing the reason why i brought or Buyed the game. Why is there ONLY Campaing and no other stuff like Editors and real exploration???

One small step for sloth Jul 2, 2013 @ 12:10pm
Anyone else come here because they thought it was minecraft related?

Miner Wars 2081 has been Greenlit and is now listed in the Steam store. For the latest information, purchase options, and discussions for Miner Wars 2081, please see it on the Steam Store or in the Steam Community.
Visit Store Page
For more details Visit Community Hub
For latest discussions
If you really, really want to, you can continue to the Greenlight page. Information on this page may be out of date, since all the action has moved to the areas noted above.