Store Page
Total War: WARHAMMER >  Workshop > Bloody Hound's Workshop
This item has been removed from the community because it violates Steam Community & Content Guidelines. It is only visible to you. If you believe your item has been removed by mistake, please contact Steam Support.
This item is incompatible with Total War: WARHAMMER. Please see the instructions page for reasons why this item might not work within Total War: WARHAMMER.
Current visibility: Hidden
This item will only be visible to you, admins, and anyone marked as a creator.
Current visibility: Friends-only
This item will only be visible in searches to you, your friends, and admins. 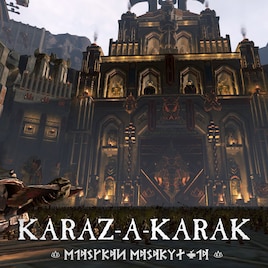 Zoidberg
Offline
See all 314 collections (some may be hidden)

Throughout all the Karaz Ankor there is no hold greater than that of the Dwarfen capital, Karaz-a-Karak. For over ten thousand years the Everpeak has stood in defiance of any foe who would dare challenge the might of the Dawi. Many have tried, but all attempts by Greenskin, Skaven, or worse have failed to penetrate Karaz-a-Karak. The resplendent jewel of the Dwarf Empire contains more wealth in single chambers than entire nations possess and inspire grandeur that lesser races can only dream of. Will you rally your forces to defend the Everpeak from its grand gates and halls? Or will you seek to be the first to sack the supposedly impregnable hold? Face your destiny, here at Karaz-a-Karak!

A campaign friendly version has now been added to the dwarf settlement pack! You'll see it in the Campaign Mod now! WOO!

We spent a Good 3-4 Weeks on this Map and has alot of details which are lore friendly as possible.
from the Hall of Pillars to the Great Gate... Aswell as showing the many riches Karaz-A-Karak has.

Alot of small details have gone to make this a very detailed map. and alot of new stuff including custom decals and Weapons pulled from units to make the statues as awesome as possible.

There may be some Issues so please let us know and i'll fix them as soon as possible. After all this is a detailed map i've bound to have missed something of the countless hours i've spent on it.

I Also plan to make a siege version for the Campaign Mod and make it as AI friendly as possible so please use this for Multiplayer agasint other players only. For now...

I hope you enjoy the map and think it's as awesome as we hope it is. Please like and upvote! <3

-Nvida users will see some lighting issues/flickering... Nothing i can do sadly just reload the map and hope for a better random weather.(Happens when the sun is low when it's high no shadow issues occur)

-Camera jumps or acts weird... most the time this is due to buildings and nothing can be done about this for default Camera, Debug camera stops this.

-Everyone will need to download the map as it uses custom decals otherwise you will get incompatible issues.

-Archers get stuck on walls (Side ones near the Hall of pillars) just move them to the back half of the wall then dismount. (Will try and fix this later, Fixed this issue with the rest of the Walls. Apart from the 2 Side ones.)

Many Thanks to Maruka who helped out with stuff involving Towers/walls/ and whatnot. aswell as prefabs and working on the map in my downtime (tea breaks) Also figuring out how to add custom decals and unlock hidden items.

Many Thanks also to Loremaster of Sotek who gave the Seal of Approvel Lore wise and giving some great input and the Direction we should head.

And Many Thanks do Zoidberg for providing Prefabs to use. Aswell as his Supportive Motivational borderline insultive talks.

Bloody Hound  [author] Jan 7, 2019 @ 5:01am
There is a version of it in the GCCM mod, but that's mainly campaign focused. However i intend to put in WH2 when i finally get of my arse and do it. I could simply just copy it over and that in theory shouldn't take long. However i would like to add on to this map like more details or improve some areas where i thought it was lacking. Other question is should i do it for WH2 or just wait it out and do it for WH3 which will inevitably come.