Store Page
Stellaris>  Workshop > Birdy's Workshop
This item has been removed from the community because it violates Steam Community & Content Guidelines. It is only visible to you. If you believe your item has been removed by mistake, please contact Steam Support.
This item is incompatible with Stellaris. Please see the instructions page for reasons why this item might not work within Stellaris.
Current visibility: Hidden
This item will only be visible to you, admins, and anyone marked as a creator.
Current visibility: Friends-only
This item will only be visible in searches to you, your friends, and admins. 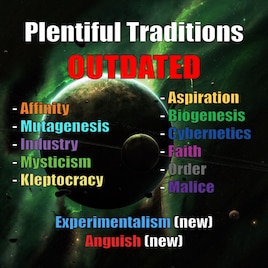 Birdy
Offline
See all 5500 collections (some may be hidden)

This item has been added to your Subscriptions. Some games will require you to relaunch them before the item will be downloaded.
Description
MOD IN HIATUS - USE MY WORK AS YOU SEE FIT - I WISH YOU ALL THE BEST - BLESS YOUR FAMILIES AND CATS _ NO MORE TIME TO WORK ON THIS, MY CHILD IS YOURS
Use "Expanded Stellaris Traditions" by Girion instead http://steamcommunity.com/sharedfiles/filedetails/?id=946222466 !
Plentiful Traditions
Game version: 1.9.*

Description
This is a mod that adds a lot of new traditions by the addition of thirteen tradition trees. It's mostly a mod I made for myself, but perhaps some of you enjoy it as well.

As featured on the official Paradox Stellaris Mod Highlight Stream[www.twitch.tv], Odin Gaming[odingaming.com], "Mod Friday #3" and by Paradox themselves.

Planned
Compatibility
It works great with other mods, except for other mods that touch the "topbar_traditions_view.gui" file since that file is used to create the tradition UI.

Frequently Asked Questions
Does this work for existing saves?
Yes, as long as they meet the current game version.

Will you add more unique Ascension Perks?
Don't know, there are plenty of other mods for this, but there's a new great perk mod called Expanded Stellaris Ascension Perks by Girion.

To mod authors
For any modders looking into using my code as a source of inspiration (no copying of files/graphics, make your own :D), go ahead, enjoy the modding and don't forget to give credit where credit is due. Not to be included in other mods, other than contentless compatibility patches.

To translators
I highly recommend making a translation mod.

To tradition mod lovers
For people willing to enjoy another good tradition mod, I'd highly recommend Expanded Stellaris Traditions by Girion. Tons of work has gone into it. Give it a try, you won't regret it!

Support
If you really enjoy playing with my mod, and wish to support me, check the details at the top of this page!

Hope you enjoy the mod and please don't forget to rate it if you like it!

PINNED: Mod no longer updated. Author no longer has time. Use my stuff, bless all of you.
Birdy
< >
1,307 Comments

AlphaAshIsAWeenie Mar 5, 2019 @ 6:56pm
Could you make a compatibilty patch for STNH. They wont do that or add new traditions and the few hat stellaris has are not enough to simulate diversity. So this mod is a must but currently doesnt work with STNH. Hell I would donate to a coffee fund if you managed to make a STNH patch!

12g Hollow Point Slug Dec 20, 2018 @ 9:31pm
For those who must know or don't know there is a modder who took up this mod and has been updating it as this one is no longer to be developed and updated