Store Page
Garry's Mod>  Workshop > White_Tiger's Workshop
This item has been removed from the community because it violates Steam Community & Content Guidelines. It is only visible to you. If you believe your item has been removed by mistake, please contact Steam Support.
This item is incompatible with Garry's Mod. Please see the instructions page for reasons why this item might not work within Garry's Mod.
Current visibility: Hidden
This item will only be visible to you, admins, and anyone marked as a creator.
Current visibility: Friends-only
This item will only be visible in searches to you, your friends, and admins. 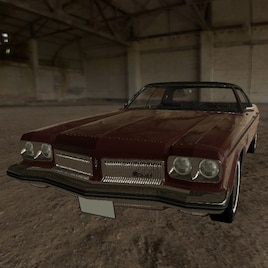 This item has been added to your Subscriptions. Some games will require you to relaunch them before the item will be downloaded.
In 1 collection by White_Tiger
WhiteTiger Car collection

10 items
Description
A Driveable Oldsmobile Delta 88 1973 ported by me.
Can be found in Vehicles->Whitetiger

The Oldsmobile 88 (known from 1989 onwards as the Eighty Eight) is a full-size car that was sold and produced by Oldsmobile from 1949 until 1999. From 1950 to 1974 the 88 was the division's top-selling line, particularly the entry-level models such as the 88 and Dynamic 88. The 88 series was also an image leader for Oldsmobile, particularly in the early years (1949–51) when it was one of the best performing automobiles thanks to its relatively small size, light weight and advanced overhead-valve high-compression V8 engine. This engine, originally designed for the larger C-bodied and more luxurious 98 series, also replaced the straight-8 on the smaller B-bodied 78. With the large, high performance V8, the Oldsmobile 88 is widely considered to be the first muscle car, although this title is disputed.

Yandere-Kun May 2, 2017 @ 4:47pm
Damn My Dad Had One of These Cars Same Color Too Imagine Something Like This Being Fitted With Hover Conversion
< >