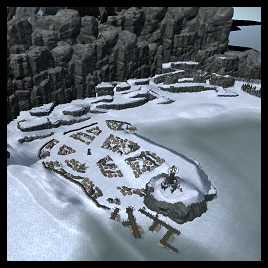 Girion
Offline
See all 12 collections (some may be hidden)

This item has been added to your Subscriptions. Some games will require you to relaunch them before the item will be downloaded.
Description
The Bretonnians have finally had enough with the Norscan raiders and is launching and Errantry War to strike them down once and for all. In this battle map the Bretonnian army have just landed outside the Norscan settlement of Heimseter (yes that is a place in the Warhammer world, just north of Bretonnia). Their goal is to assault and raze the village, no more in will serve as a base for raids on fair Bretonnia!

This large battle map is set on the shores of Norsca. You can fight on the coast, or in the mountains above. On one side you find a Norscan village, on the other the Bretonnian landing and encampment. Half of the map is composed of the mountain range. It is filled with choke points, lookout points and good platforms for ranged units. It is also the perfect place to hide a vanguard force.

You should be able to play this map with both smaller and bigger armies. For a small battle you can fight on the coast, its just about big enough for an army. You will have an epic scenery with the mountains and the sea on both sides. The Mountains can also be used to hide a flanking party of more mobile units, or to place vanguard units.

I've tried to make a map that's both spectacular to look at and have a good feel when you play it, while at the same time offering lots of tactical options. In my tests the AI can handle it, although it maybe won't use the mountains to their full potential (nothing stops you from trying to bring the fight up there though). There's a lot of attentiaon to small details. Do you see any buildings looking out of place, or any clipping or other things not looking as they should? I probably missed it, tell me and I will fix it.

Some notes on the look of the map:
- The edges might look a little funny, it has to do with terry's tendency to delete/drastically move down stuff placed at the edge/at a steep slope (which is at the borders at the map, its design is not un-complicated)
- If you look closer you might discover that the water far away is lower than it should, Terry moved it down towards ground level when I placed it outside the play area)
- Some cliff shadows look strange. Not much to do there, removing them cause flickering.
- I removed the shadows from the background mountains, they made the map unnecessarily dark.
(You probably won't notice these things if you are paying more attention to the battle than the far corners of the map, but if you do here is a short explanation)

I agree that many of the paths can get a bit narrow, especially at larger unit sizes. Many of the roads are not really meant to me "maneuvered", rather just a way to get to the larger plateaus, if enemy units do encounter each other there a chaotic brawl is meant to ensure.

That being said I do agree widening would not hurt, in my latest map (varenka) I generally increased the size of paths as compared to this one.

kalin Sep 11, 2017 @ 9:18pm
Just some feedback after playing norsca+SFO mod with Ultra size. The norsca units tend to take up a lot of space and it's making the navigation extremely difficult - positioning units on the windy hill roads is extremely difficult (the units just cant fit). It causes pathfinding to sometimes outright fail which causes some minor halts every few seconds.

The distance from the starting spawn to the town feels very far, I was playing early so no siege equipment though.

Overall I like the general design, but I'm not finding the top winding hills very usable with navigation. I think just widening things out a bit might help a great deal.

If that's the case then things are working exactly like they should. Due to problems with the map editor it was not possible to create a coast without increasig the height of the map by about 200 or something. The reinforcements still have to appear at the edge though (and at "ground" level).

If you look at them when they arrive this means that things indeed look funny. What you should do is selecting the reinforcements and clicking on your side of the map and they will move up a ramp under the mountains and eventually appear at your side.

Ofcourse this is not ideal, but it is a direct consequence of the map having a coast (there were lots of other issues with this that I managed to bypass, maybe someday CA will add the option to make coast in a simple way, as terry works right now your not really supposed to).

PsychoticSoul Sep 7, 2017 @ 3:50am
I'm the attacker - reinforcements are still an issue, they show up basically underground in an inacessible area, see below screenshot:

Girion  [author] Sep 3, 2017 @ 12:06pm
No. I am a bit unsure exactly how that mod work, do they have to include the mod files, or does it automatically use the latest version?

Girion  [author] Sep 3, 2017 @ 5:26am
Have made an update. Helpful if people can say whenever it works for reinforcement works for attacker/defender/both/neither.

(if you reinforcements appears in a strange place inside the mountains do not worry, to be able to add a coast I had to increase the height of the entire map by a lot. The reinforcements have to appear at ground level though, which in this case is under ground, just direct them to your edge of the map and they will pop out from a forest sooner or later)

Girion  [author] Sep 3, 2017 @ 4:14am
I was bussy all day yesterday. I've checked out the problem today. I've made one fix to it (I've seen some things that I think can be the problem, but the issue is a bit curious, hope this miht work).

Having problem with WH at the moment, as soon as that is sorted out I will uplaod it.