Store Page
Hollow Knight > Guides > Demajen's Guides
This item has been removed from the community because it violates Steam Community & Content Guidelines. It is only visible to you. If you believe your item has been removed by mistake, please contact Steam Support.
This item is incompatible with Hollow Knight. Please see the instructions page for reasons why this item might not work within Hollow Knight.
Current visibility: Hidden
This item will only be visible to you, admins, and anyone marked as a creator.
Current visibility: Friends-only
This item will only be visible in searches to you, your friends, and admins.

Most Importantly
+ Resized map to 200% using AI upscaling. This has caused a couple of minor issues with haloing but I've fixed the important ones. This means that the map is much more readable on modern hardware and screens.

The big versions of the map is 17992x12605 pixels in size and weighs in at 57MB which is too much for Google Drive's native API to show you, so you'll have to download it[drive.google.com]. There's a downscaled one also available in the drive that will work in a browser, plus the version in the Steam guide itself which I ensured lost nothing in comparison to the previous version.

Other Edits
+ Added rancid egg locations as requested by "N" in the comments. (There you go, randomiser fans. Sorry it's so late.)
+ Added Mr Mushroom back in. No idea where he went.
+ Fixed Hallownest Seal location in Fog Canyon, thanks to "rezno[R].technology" in the comments.
+ Fixed shape of room in Kingdom's Edge. (No idea when Team Cherry changed this.)
+ Modified Quick Slash text to suit new room size and the rancid egg nearby.
+ Replaced all Stag Station icons. (The purple glow had hard edges and I never noticed.)
+ Changed Pale Lurker pronoun use as mentioned by "Alien Killer" in the comments. (It's "her" in German, apparently. I've flipped it to "they" to cover all bases.)
+ Fixed text overlap of the Shopkeeper's Key in Crystal Peak.
+ Fixed weird overlap of the White Fragment and White Lady in the Queen's Garden.
+ Fixed weird overlap of Cornifer, the Fountain, and the Tram Station in the Ancient Basin.
+ Updated my social media info (I haven't streamed on Twitch in years thanks to conflict with students at work. My Twitter is still @demajen for anyone who cares.)
+ Updated entire background map texture for clarity and smoothness.
+ Fixed locations in The Spire in the City of Tears for the grub, Watcher Knight, and Hallownest Seal based on the latest version of the room's map.
The Map
FULL RESOLUTION HQ (21MB PNG)[drive.google.com] 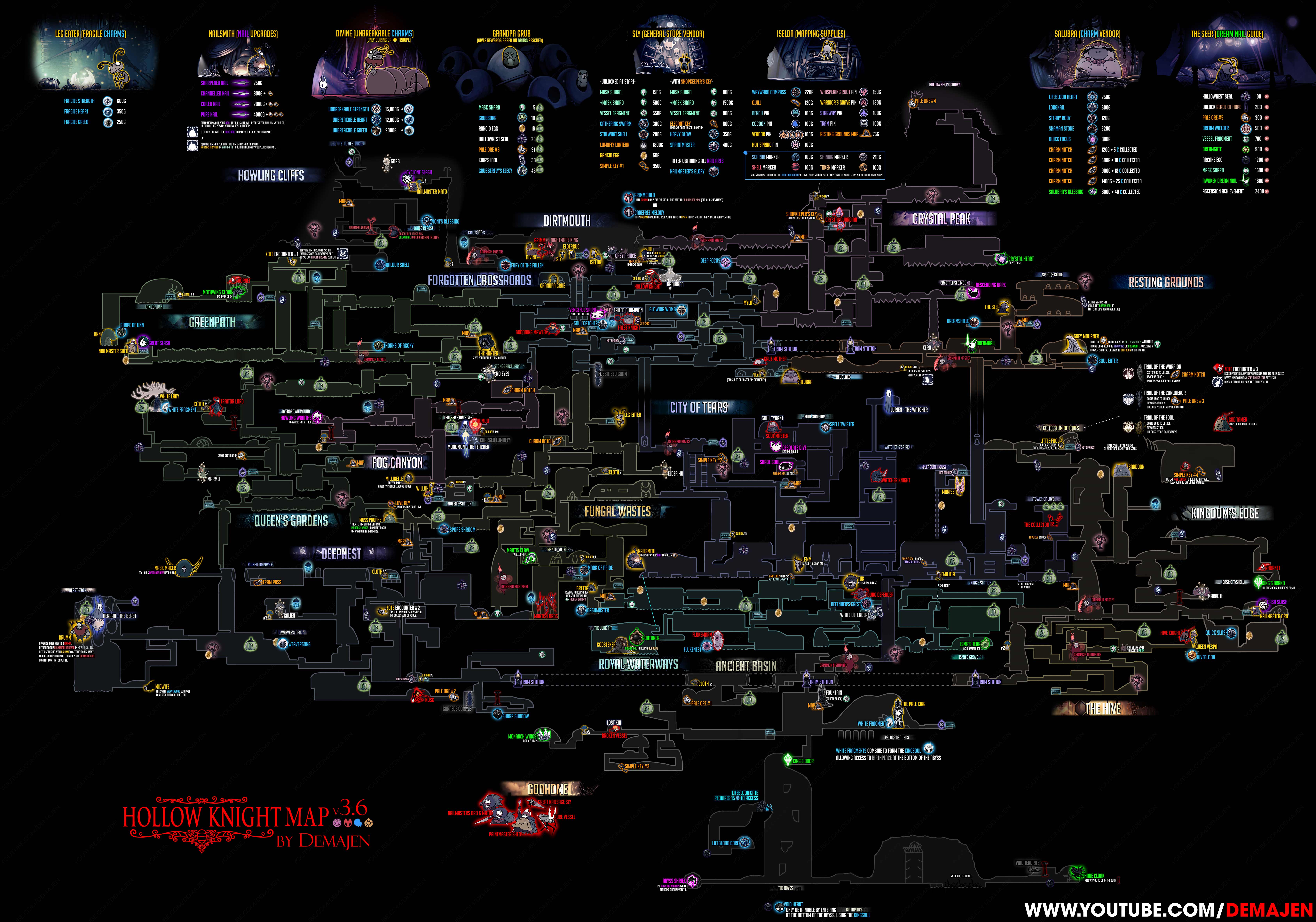 Details can also be found in the COLLECTIBLES section of the Hollowknight WIki's "Relic Seeker Lemm[hollowknight.wikia.com]" page (apart from Hallownest Seal #17 which is missing from there).
Archived Map
In case you prefer the 1.X-style version of the map, AN ARCHIVED VERSION is available.
< >
147 Comments

Demajen  [author] Dec 2 @ 1:56am
@Neo2266 It isn't forgotten about. I just didn't mark any geo deposits on the map because it was already massively cluttered.

why does EVERY map forget about this place

EyesofDeath_01 Oct 30 @ 9:59am
This map carried me through mid-late game grinding, can’t thank you enough.

N Feb 8, 2021 @ 11:52pm
Can you please add all rancid eggs locations to the map as well? While playing with randomizer the rancid eggs are really important to collect.

RogerO.Thornhill Jan 14, 2021 @ 1:28pm
@Johneffer Bloom you fight them in the pantheon of hollownest which is the fifth pantheon.